The COVID-19 pandemic has necessitated immense behavioral changes among the general population. The gaming industry's audience is only growing as people look for new ways to entertain themselves at home or socialize with friends over long-distance.

Given the massive revenue and overall popularity of video games, I was curious to explore sales and rating data. An interesting phenomenon in other entertainment industries (film in particular) is the discrepancy between the ratings of the general population and of critics. In this project, I attempt to uncover if this same discrepancy exists within the video games industry. Moreover, if such a discrepancy existed, I sought to see if this had a substantial impact on sales.

I retrieved a dataset from Kaggle containing information on approximately 7,000 video games, released between 1996 and 2016. The file included general information about the game itself (developer and publisher, platform, rating, etc.), units sold (in millions) for multiple world regions as well as a global total, and user and critic ratings.

To investigate whether different world regions express unique preferences for video games, I produced two visualizations: a stacked bar chart (as seen above), and a mosaic chart (below). The stacked bar chart was made using the R libraries ggplot2, dplyr, and tidyr. The proportions of each region were not expected to be identical - North America and Europe each are more populous than Japan, for example.

Particular regions were determined to be over- or under- represented based on the relative width of their slice of each bar. Some of the findings I interpreted were that North America disproportionately prefers Sports and Shooter genres. Japan, seems to express virtually no preference in those two genres but is over-represented in purchases of the Role-Playing and Puzzle genres. However, I found that overall this chart was not the most effective method of conveying this information. As a result, I produced a mosaic plot. 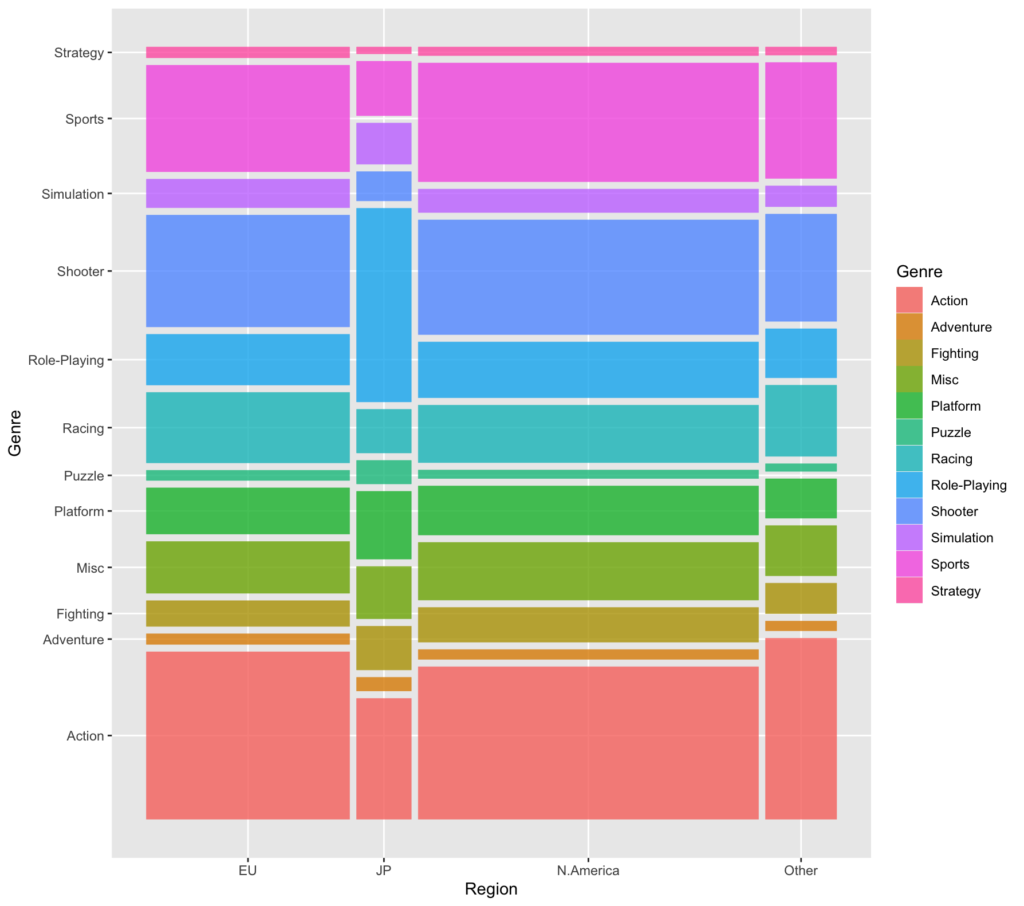 Courtesy of the package ggmosaic.

Mosaic plots are a neat way to visualize the relationship between two categorical variables. I weighted each region-by-genre block by the number of units sold. The height of each box represents the relative amount of units sold in that genre. This can be compared across rows (to other regions) or up and down the column (to compare between genres, within the region).

Overall, it seems North America and Europe display very similar preferences in terms of the genres of games most often sold. Japan displays unique patterns in terms of game preferences. I would suggest targeted regional approaches in terms of marketing. Some games might experience massive popularity in one part of the world, but not universally, depending on their genre.

I was interested in investigating whether user and critic ratings reach a general consensus with one another. For all genres, there is a positive, linear relationship between user and critic rating. This indicates that in general, higher user scores can suggest higher critic scores, and that the two ratings are somewhat consistent.

However, the strength of this relationship varies by genre. Strategy games, for example, have a relatively weak association, whereas puzzle games have a relatively strong association. This may be more indicative of the quantity of data points: there are not an equal number of games in each genre present in the data set. However, a visible linear pattern in present in most of the genres, which suggests some relationship, even if to a minor degree.

As interesting of an insight as the correlations displayed above are, they are truly only useful if ratings affect game sales. In order to see if this was the case, I produced a linear regression line to display the relationship between:

Across all genres, critic scores display a stronger, positive association with units sold. This indicates that potential consumers may be more influenced by critics' ratings of the game than a user's. The rate to which user ratings are correlated with units sold varies for the genres.

Adventure and Strategy sales are not affected much by either rating type, suggesting purchases are not broadly affected by ratings. There is a substantially strong relationship between critic scores and units sold, for Action games, suggesting that critics' ratings are strongly taken into consideration strongly.

The answer is: it depends. The relationship between ratings and sales varies greatly by genre. Similarly, the source of the rating (user or critic) varies in influence by genre. My number-one suggestion to developers and advertisers would be: know your audience.

My personal hypothesis may be that users will trust a rating as reliable if they believe the rater prioritizes the same features as themselves. However, that's a direction for future investigation.

It was a highly rewarding experience building an R Shiny application from scratch to display my findings. I also had the opportunity to take advantage of Shiny's interactivity features. Beyond the findings discussed above, I included an interactive data table on my shiny application, using the DT library. The user has the capability to filter by region (determining the number of units sold displayed) and platform of game. I encourage anyone exploring the app to use these features to see if they can discover any trends of interest!

Thank you for taking the time to read about my project! Video games and beautiful figures are both hobbies of mine, so I found this project to be highly rewarding! I appreciate the new insights working on this project has encouraged me to think about, and I am excited to improve my visualization skills even more going forward.

No solo project is ever truly completed alone. I'd like to give a huge thanks to the incredible team of instructors at NYCDSA for their assistance and patience in debugging. I'd like to thank the other members of my cohort, whom I am learning with as well, for offering their advice, encouragement, and invaluable feedback in constructing this project.