Lending Club (“LC”) is the world’s largest peer to peer online platform. It reduces the cost of lending and borrowing for individuals with advanced data analytics.  Peer to peer companies’ function is matching people who have money with people who want to borrow money. As a leader in the peer to peer lending industry, LC completed its initial public offering in December 2014, which definitely improved public trust in this fast growing company.

This analysis is based on data published on the website of Lending Club company. (You can find it here.)  The dataset contains 1,021,286 observation and 111 variables collected from 2007 to 2016Q1. Forty variables were selected for this analysis.  Four trends were investigated: growth of issued loans, both in terms of dollars and volume, geographical distribution of loans, purposes for loans, and interest rate changes over time. 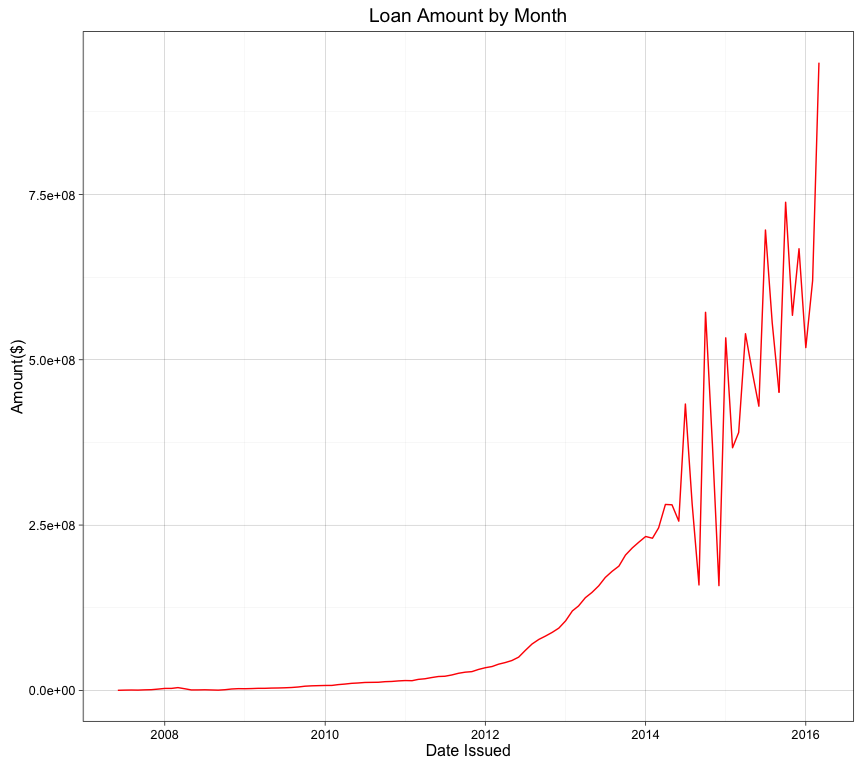 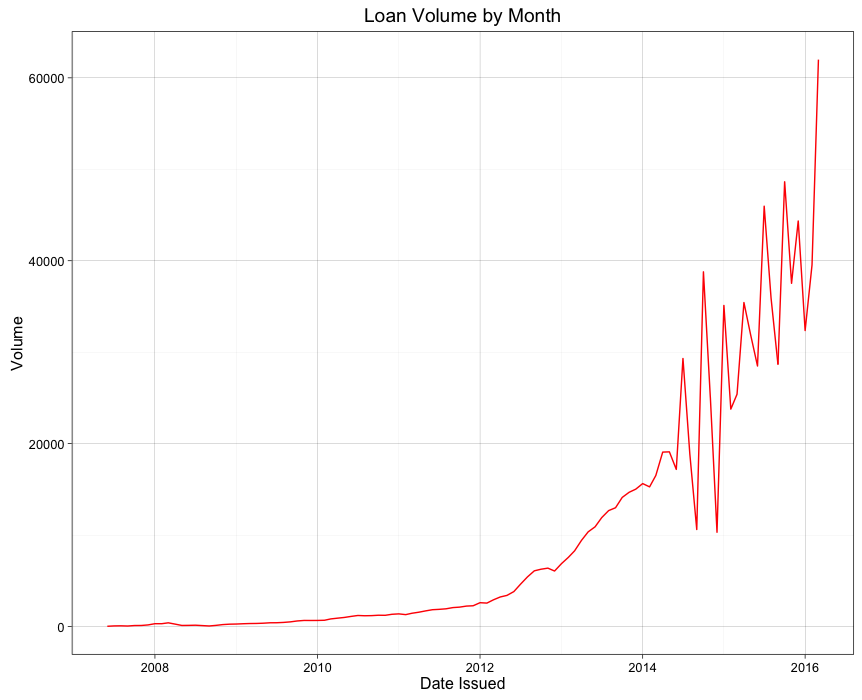 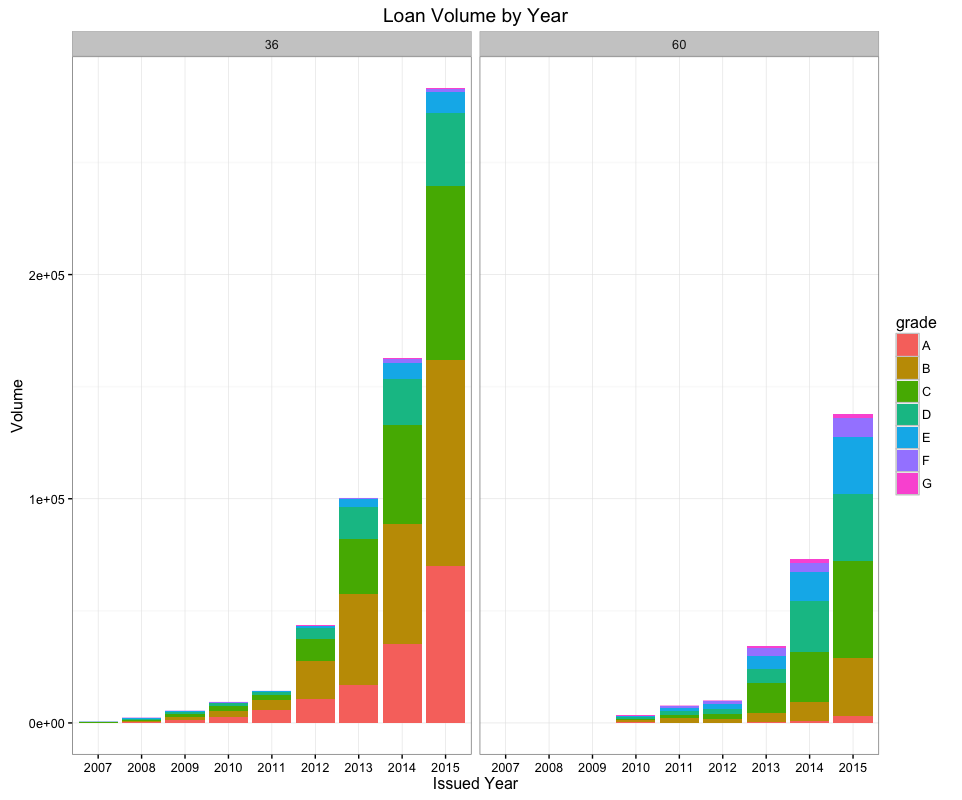 Lending Club got launched during 2007, but its business grew significantly since the start of 2012. From 2014 to 2016Q1, monthly loan amount and volume have been increasing drastically, but the increasing trend is unstable in the short term. Additionally, the increasing paths of the loan amounts and volume are similar. We can still expect a high growth rate in the following year based on past growth and the performance of first quarter in 2016. 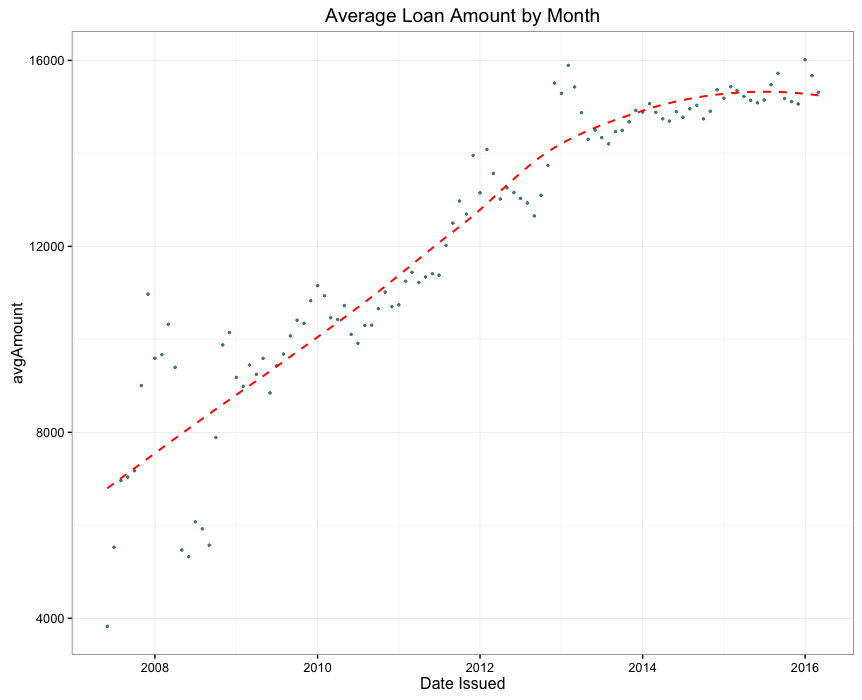 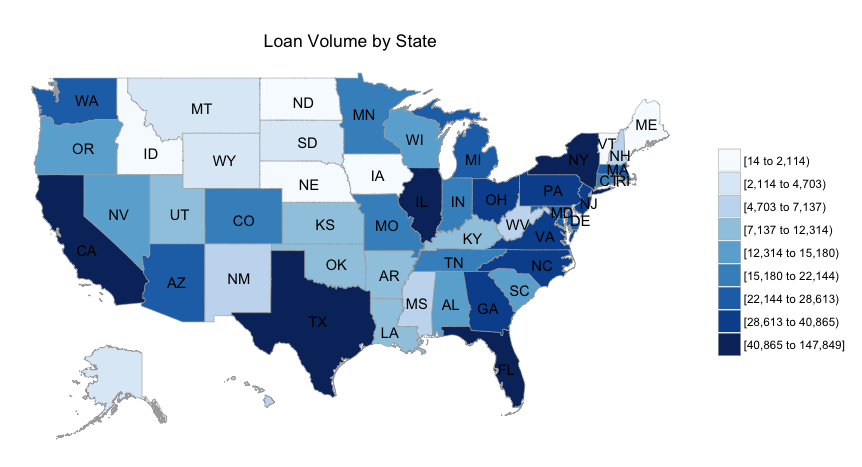 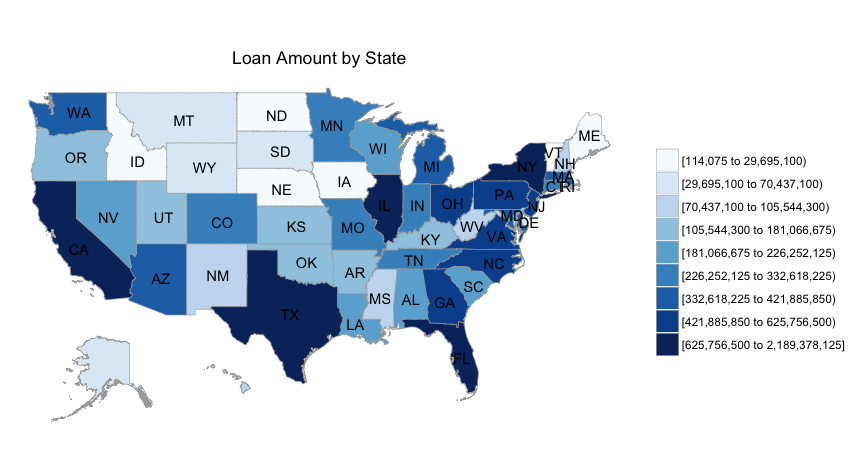 From a geographical perspective, California, Texas, New York, Florida and Illinois have the largest dollar amount and volume of loans.

3.Why and How Much do People Borrow?

Peer to peer lending focuses on individual lending and borrowing, so it’s important to understand why consumers decide to borrow money. 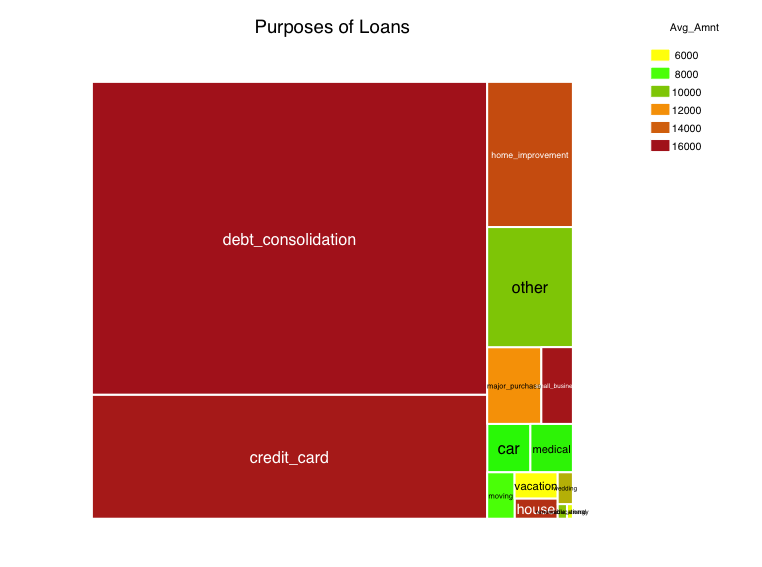 Unsurprisingly, debt consolidation is the most common reason for borrowing. The greatest advantage of peer to peer lending is the low cost, so loans issued by LC usually charge lower interest rates compared with money provided by traditional banks. Most consumers choose to consolidate debt to enjoy lower borrowing costs.

The color in the above tree map stands for different average amounts of loans for different purposes. Debt consolidation, credit card, house and small business are the most popular reasons for borrowing.

Two loan terms were explored, 36 months and 60 months.  (Note in the plot below, the analysis begins in 2010 because LC did not introduce 60-month loans until 2009.)  Interest rates vs. loan terms vs. loan grade are represented in the graph below. 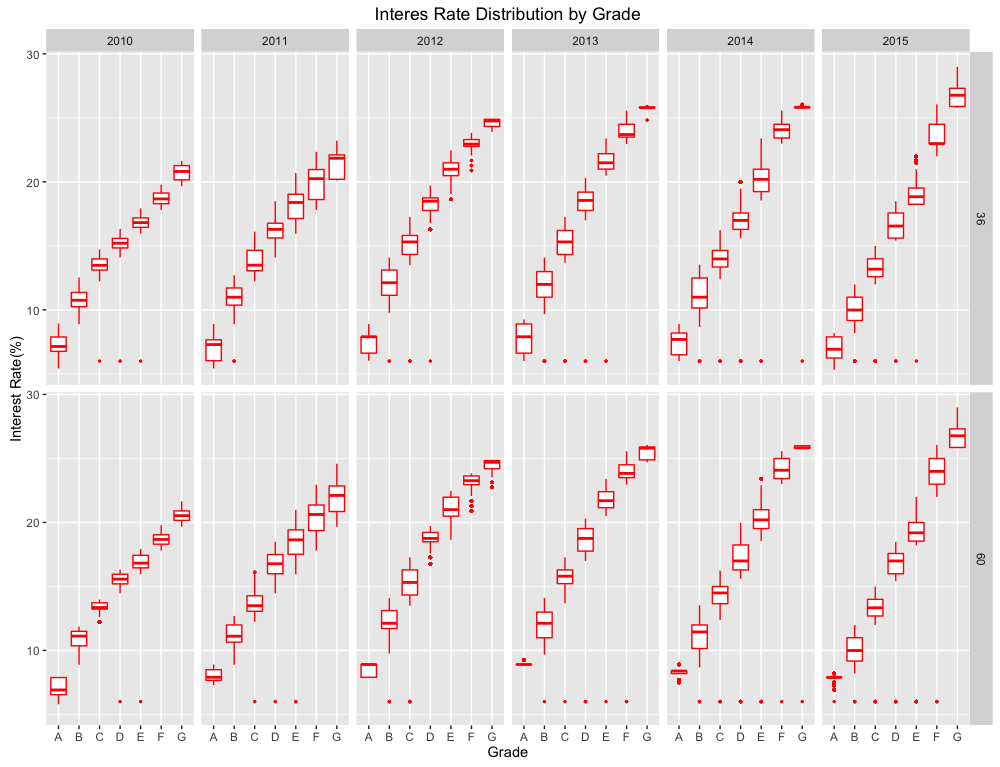 According to the risk theory, longer loans own higher risk as well as higher interest rate than shorter ones. However, we cannot obtain the corresponding conclusion from above graph. Interest rate distributions with different terms have no significant difference.

However, it’s really interesting that interest rates of different grades behave in a significant trend through years. From 2010 to 2015, interest rates for loans with grade D, E, F, G obviously increased. We still see there are larger disparities of interest rates among grades, possibly due in part to LC’s credit policy updates. This change is a great symbol that LC has become more and more proficient in the evaluation of loans’ risk.

In this project, we have a brief and clear introduction to the growth of LC’s main business. It’s obvious that LC is currently a fast-growing but the volume and amount of loans are erratic.  This is surprising given that we expect public companies to be more stable.  The drastic fluctuation of LC’s stock price also proves the conclusion.

However, LC’s business model still brings a great advantage over traditional banks. LC is improving its risk and credit evaluation technology and trying to extend its market from individuals to businesses. From the latest growth data, we still believe LC issued loans will continue to grow rapidly.

Geographical distribution of issued loans may be influenced by several factors such as state financial standing, state culture, LC’s advertising strategies, etc.  We need more data for the deeper exploration, so combining current dataset with other datasets is a good choice.

FICO is widely accepted by traditional banks as a credit index, but LC claims its algorithm considers more than 2000 variables in credit evolution and risk management. There may be some interesting correlation between grade and factors such as homeownership, number of inquires, debt to income ratio, etc. We can explore this more with more advanced data analytics.

Google May 30, 2021
Google The time to read or take a look at the subject material or sites we've linked to beneath.

Google May 11, 2021
Google Every as soon as inside a while we select blogs that we study. Listed below are the newest sites that we opt for.

Google October 18, 2019
Google Just beneath, are various totally not connected websites to ours, however, they're certainly really worth going over.

Google September 17, 2019
Google Very few websites that take place to become comprehensive beneath, from our point of view are undoubtedly very well really worth checking out.

Christopher Roman February 7, 2018
Shu - When you have the time check out www.lcpicks.com. It is an algorithm that keeps your default value <2% while giving you a ANAR of 9.75%-12%. Let me know what you think! Thanks, -Chris

http://bhg.com/home-services/near-me/area-vallejo-california/plumbers/ November 5, 2017
For most recent information you have to visit world-wide-web andd on internet I found this site as a best web site for newest updates.

swimmingpoolpros.org September 25, 2017
you're really a just right webmaster. The website loading speed is amazing. It seems that you're doing any unique trick. Moreover, The contents are masterpiece. you've done a wonderful process in this subject!

www.marketwired.com September 24, 2017
I do trust all of the ideas you've offwred iin your post. They are very convincing and will certainly work. Nonetheless, the posts are very quick for beginners. May just you please lengthen them a bit from subsequent time? Thanks for the post.

Janice September 20, 2017
I constantly emailed this weblpg post page tto all myy associates, as if like to read it afterward my friends will too.

Gladis September 16, 2017
Have you ever considered publishing an ebook or guest authoring on other sites? I have a blog based on the same information you discuss and would love to have you share some stories/information. I know my subscribesrs would value your work. If you're even remotely interested, feel free to send me an e mail.

storify.com September 11, 2017
It's wonderful that you are getting thoughts from tbis paragraph as wel as from our discussion made here.

www.onlinehairaffair.com August 5, 2017
Definitely believe that that you stated. Your favorite justification appeared to be at the web the simplest thing to take into account of. I say to you, I definitely get irked at the same time ass folks consider issues that they plainly do not understand about. You managed to hit the nail upon the highest and outlined ouut the entire thing with no need side-effects , people can take a signal. Will likely be bazck to get more. Thank you

Lakesha August 3, 2017
My brother suggested I might like this web site. He was once totally right. This put up truly made my day. You cann't imagine simnply how a lot tim I had spent for this info! Thank you!

Kenneth July 27, 2017
Thank you for any other informative blog. Where else may I am getting that kind of info written in such a perfect way? I've a venture that I am simply now operating on, and I've been on the look out for such information.

Ricardo July 26, 2017
Hi there everyone, it's my first go to seee at this site, annd piece of writing is really fruitful for me, keep up posting these types of posts.

Clement June 25, 2017
It's really very difficult in this active life to listen news on Television, so I just use internet for that reason, and take the most up-to-date information.

Gennie June 23, 2017
I constantly spent mmy half an hour to read this weblog's posts all the time along with a cup of coffee.

kewvineyards.com June 19, 2017
Yesterday, while I was at work, my cousin stole my iPad and tested to see if it can survive a forty foot drop, just so she can be a youtube sensation. My apple ipad is now destroyed and she has 83 views. I know this is completely off topic but I had to share it with someone!

Christie June 15, 2017
Hi, yeah this post is truly nice and I have learned lot of things from it concerning blogging. thanks.

http://www.huffingtonpost.com May 28, 2017
It's in point of fact a nice and useful piece of info. I amm satisfied that you shared tthis useful information with us. Please sttay us upp to date like this. Thanks for sharing.

Natalie May 21, 2017
I got thios website from my paal who tolld me about this site and at the moment this time I am browsing this ssite and reading very informative articles at this time.

Young May 15, 2017
Woah! I'm really loving the template/theme of this blog.It's simple, yett effective. A lot of timess it's tough to get that "perfect balance" between usability and visual appearance. I must say that you've done a superb job with this. In addition, the blog loads extremely quick for me on Opera. Outstanding Blog!

whitepages.com May 13, 2017
It's going to be finish of mine day, but before ending I am reading this fantastic paragraph to improve my knowledge.

http://plumbingweb.com/ April 12, 2017
Hello, you used to write wonderful, but the last several posts have been kinda boring� I miss your super writings. Past few posts are just a bit out of track! come on!

Natalie April 3, 2017
I think what you published made a lot of sense. However, what about this? what if you typed a catchier post title? I mean, I don't wish to tell you how to run your blog, but what if you added a post title that makes people want more? I mean blog topic is kinda boring. You ought to glance at Yahoo's home page and watch how they write news headlines to grab people to open the links. You might try adding a video or a pic or two to grab readers excited about what you've got to say. In my opinion, it could make your blog a little bit more interesting.

Jodi March 7, 2017
Wow, this piece of writing is good, my sister is analyzing these kinds of things, thus I am going to let know her.