Data Visualization of Gun Violence in the United States

Gun control and possession rights is one of the most controversial topics in the United States, mostly because of the associated violences and crimes that come with having guns as a weapon. It is difficult to find data statistics on gun violence and crime without the bias of third party organizations.

The goal of this app is to help the user visualize trends in gun violence incidents though various observations without bias. With a more broad understanding of the trends of gun violence, we can see where to actively target certain areas to help decrease the amount of gun violence in the future.

This dataset is sourced from Kaggle. The dataset is derived from web scrapping techniques on another third party site, gunviolencearchive.org . I, and NYC Data Science Academy, do not own this dataset or was involved with web scrapping it. For more information, please visit the provided links.

To aid in the analysis of this dataset, I used the Annual Estimates of the Resident Population for the United States, Regions, States, and Puerto Rico: April 1, 2010 to July 1, 2018 table. This gave the population size for each state, including the District of Columbia, to help accurately compare crime rates.

The dataset is 230,000+ gun related incidents that have been recorded on all states since March 2013, up to March 2018. This dataset was joined with population data in R Studio. The joined table was further cleaned with added columns for analysis.

We first start with a couple of overview plots to get a general idea of the dispersion of gun related crime incidents. 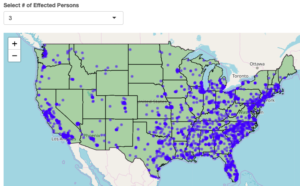 While this is a shockingly high number, DC is known for having incredibly high crime rates, mostly due to various drug wars and the striking wealth gap. 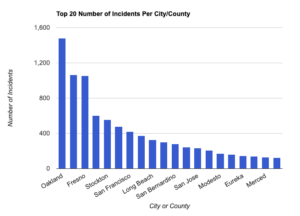 Furthermore, users can investigate the number of incidents and the number of homicides due to gun violence by month to examine the change in seasons. In the graph below, we can see a peak in the summer months for the number of gun related incidents in Connecticut in 2016. 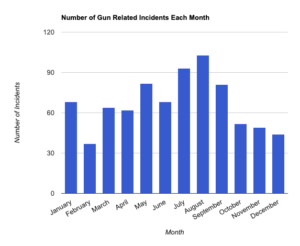 In conclusion, this gun violence dataset gives us a broad overview of what gun related incidents look like around the United States. We are able to see some interesting results that may contradict some previous assumptions. Ultimately, I believe this dataset will be useful for people to get some solid insight on gun violence.