If I asked you what group ,based on data, in NYC made up one of the most populous and wide-spread in the city, who would you think would most likely come to mind? No matter what your answer, the group would almost certainly be a group of humans. But no one in this city would also be able to deny that the city's wildlife is also one of its hallmarks.

Between the pigeons overhead, the squirrels in the park, or the roaches in almost every corner of every apartment, we have more non-human life in NYC than human life by just about every metric we can come up with. So when you think about what group is closest to people in the city you may be both interested and disgusted by the knowledge that rats are our most common, and closest neighbors. Do not worry if that bothers you though, as that is just a sign that you are not comfortable with rodent infestation in general, and that is completely normal. But like it or not, our ratty friends are here to stay.

Why do we really care and is it costing us anything?

Consider that since people could start drawing on walls in caves that rats were living right alongside us, it is a mystery how we have not figured out how to rid ourselves of them since we have always universally hated them. And that sentiment can be echoed in recent years when $32 million dollars was pledged by city officials to eliminate large swaths of the population of rodents in NYC.1 And yet 3 years, and far more than the initial $32 million dollar budget, later, populations of rats actually seem to be on the rise. There is even evidence to suggest that efforts to curb rat growth help to increase the population.

The Data straight from the horse's mouth.

I took a large data set from the OpenDataNYC site2 about all the times that the city had to be called in to take care of an outbreak of rats in all boroughs of NYC in the last 10 years. There were over 1,000,000 cases where authorities were sent to search for rats in areas of the city, and while most cases came with no results, about 125,000 of the searches came up with active rat signs and the action of trying to eliminate the populations there. 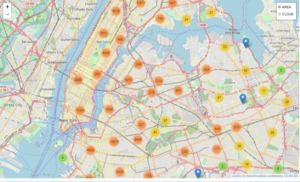 Two ways to look at the data, not the results I thought I would get.

What I did within my shiny app was to look at two different ways to look at the data, by location and by time. Could there be areas of the city that were overly affected by the rats, and are there time frames that are clearly showing greater signs of rodent infestation? 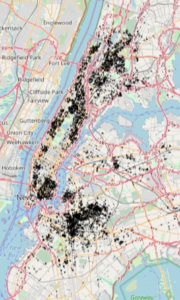 Bushwick/Bedford, Alphabet City, UWS, and the West Bronx. All but the West Bronx saw huge renovations amid a push for gentrification in the last several years, which coincided with when rat populations began to explode in those areas.

The evidence points to the constant destruction and reconstruction of buildings as being a driving factor. Rats taking up residence in new construction sites and being forced to the surface by hovel destruction caused the populations to increase significantly. As for the West Bronx, that area has had a very consistent issue with rats over the last decade due to being a low-income area and having close proximity to the Bronx Zoo.

There have always been rodents in major cities but perhaps there is an increase as of late. The charting of the data points over time shows that a rise in outbreaks in the last 3 years is proof of this.

Focusing entirely on the last several years, you can see that numbers are extremely high compared to the past. Some might point to increased funding to programs for catching and killing rats as a reason for this increase but evidence shows otherwise.3

What should be done and will it actually help?

What can be done that would be useful to the problem as a whole is to increase how sanitary the city is. Less trash and less filth will naturally decrease the populations over time as the only way for rats to increase as much as they do is with a large and steady food supply. What we are doing is actively hunting and killing rats by the thousands.

If that had any chance of making a difference then people would have eliminated the problem centuries ago. Rats are tougher than we are and if we kill off a lot of them then the ones left will eat their dead and replenish the population in a matter of months. This has been known to be scientific fact.4 Passive resistance is the way to win, not active aggression.

View all posts by Avi Avital >