Some public companies are listed on more than one stock exchange. They are called “dual-listed” or “cross-listed” depending on the legal implementation (this distinction is not taken into account in the following).
If the stock exchanges are in different time zones, then the stocks of one company are traded twice in 24 hours. We want to investigate if the day performance on the previous stock exchange has some predictive signal for the following one. To assess the presence and usefulness of such a signal, a simple trading model is defined and applied over the past data.

The trading times of the stock exchanges should not overlap, so that a completed trading day can be used as input. New York lies in the GMT-5 time zone so appropriate stock exchanges can be found in Far East. I have selected the Bombai Stock Exchange (BSE) in India in the time zone GMT+5.5; the choice was random.

After some online searching Google returned the following site with companies which are listed on NASDAQ/NYSE and BSE: http://www.goodreturns.in/classroom/2015/06/indian-companies-listed-on-nasdaq-or-nyse-369055.html
As next step I tried to find the according stock symbols on NYSE/NASDAQ and BSE. I could not find or match all of them on both stock exchanges and so the following companies remained:

Videocon d2h (VDTH) is a subsidiary of the group Videocon Industries Limited (VIDEOIND) and therefore does not match the precondition of a multiple listed company, but I obtained also this data to have a look at such a case. Additionally, data for VDTH are not available until 2015 when VDTH was established.

Daily historic stock data of the last ten years can be downloaded on the websites of the stock exchanges as CSV files:

We have to consider two cases for our intention. We can trade in New York and use the day performances of the BSE as indicators or vice versa. The goal was to provide one table where each row is an observation:

The column flip describes the trading scenario, “in->us” stands for trading in the US with the data from India as indicator. The value “us->in” marks the other case. The table only contains observations where the counterpart stock exchange has provided data in the previous 24 hours. Dates with a longer time lap, due to weekends or public holidays, are omitted. For the “in->us” case, this means that the Indian and the US date are the same. For the “us->in” case, this means that the Indian date is one day after the US date. The day performance is calculated with the formula: (close_price – open_price) / open_price.

The total gain in India is ca. 712%. While not as big as the gain in New York, it is still remarkable.
Noticeable is the performance difference between the trading model and the local row. A trade on each date in the dataset would have resulted in a loss of ca. 849%, whereas the trading model yields substantial profit.

Overall, it is obvious that the day performance of the previous, remote stock exchange contains a valuable signal that it is worth to observing.
In total the performance growths for the case “in->us” and “us->in”, but there are some interesting details. For example is the performance of WIT and VDTH negative in the “us->in” case and in the “in->us” case, WIT seems to yield no gain since 2010.
Before we dive deeper into the data, we take a closer look at the correlation of the stock prices of the companies.

The reasons for the different patches of the same company are stock splits performed in India. For example, IBN performed one at the end of 2015.

Considering the stock splits and comparing each company separately and without the split events the Pearson correlations of the stock prices are always greater than 80%, except VDTH, where the correlation factor is only 73%. However, considering the circumstance that the US company VDTH is a subsidiary of the Indian group VIDEOIND it is still strong. 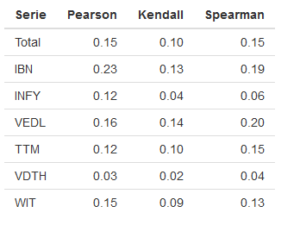 The correlation factors are much weaker than the ones of the stock prices. However, there is a measurable relationship, except for VDTH.
The total correlation over all companies is 15%. 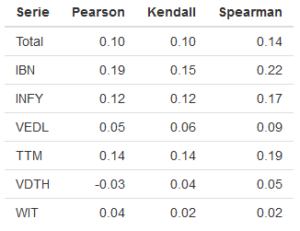 To investigate the correlations in more detail we introduce two new measures, a sliding correlation and sliding trading performance.

The sliding correlation calculates for each data point (=date/row in our dataset) the correlation between local and remote performance of the last N rows/dates before. In the Shiny App, N can be set to a value in between 10 and 120. In the following, I used the value 60, which is a good tradeoff between accuracy and noise.  The sliding trading performance is calculated the same way. For the last N rows the trading model is applied and the win/loss is calculated.

Investigating the distribution of the sliding correlation and the sliding trading performance for the time range from 2008-01-01 to 2017-07-01 gives the following boxplots: 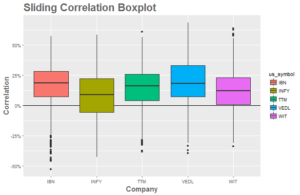 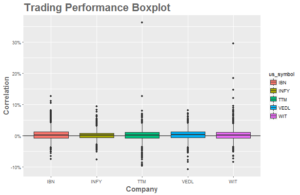 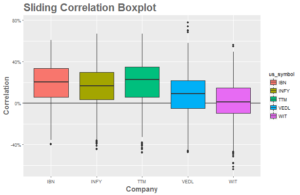 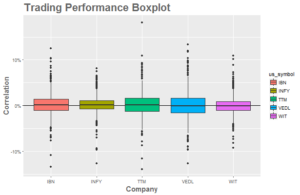 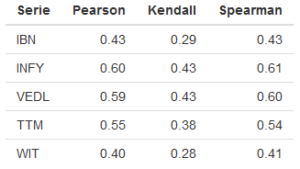 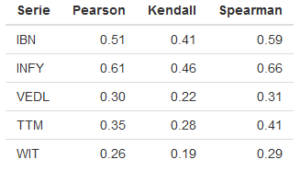 The overall performance in the time range is ca. 12.9% and clear over the every-day-trading performance of -29.13%.

The trading performance changed noticeable over the time with a clear negative peak in the first quarter of 2016 but recovers later.

The sliding correlation plot gives an explanation for the observation above. Starting at the middle of 2015 the correlation decreases and went even negative, causing substantial trading losses. During 2016 the correlation recovered and went clearly positive, driving the trading performance positive again but seems to decrease again in 2017.

The overall correlation of the local and remote day performances are given in the following table:

The evaluation shows the volatility of the day performance correlation and how it drives the trading performance up and down. Overall, there is a profit of 12.87% but during 2015 it was strongly negative.

The overall trading performance is impressive; it is noticeable that even every-day-trading would had yield a gain of 49.27%.

The sliding correlation plot shows some volatility, but it stayed positive over the complete time span.

The overall correlation of the local and remote day performances is high.

VEDL is an example for an optimal case, a strong and constant positive correlation of the day performances that yields to a linear trading gain.

The trading performance moved up and down with a strong positive peak in 2016 but decreased again.

The overall correlation of the day performances is only 1% and therefore practically not present. However, the sliding correlation plot makes the impression that positive and negative phases are not by random completely (first half of each year). If it would be possible to avoid the negative phases, a positive trading might be possible.

The overall performance is clearly positive with 26.57% but only 5% over the every-day-trading performance.

The trading performance increased until the middle of 2016 and then went over in a horizontal movement, generating no additional gain.

The overall day performance correlation is rather small:

The evaluation of the six companies showed that their stock prices are strongly correlated. The day performances on the succeeding stock exchange can correlate but on a lower level and in a more volatile way. Additionally, there are distinct differences between the companies and diverging time spans. The application of a simplified and idealistic trading model showed that the day performance correlations might have the potential to generate remarkable profit.
A closer look revealed that the performance of the trading model is linked to the relative correlation strength.

The investigation and application of more enhanced methods to predict the current correlation level could yield to a more performant and reliable trading model.

The Shiny application with which the evaluations were carried out can be found here (please note that you have to press the “Refresh” button to update the charts.)

The code can be found here.

Stefan holds an MS in Computer Science and has 17 years of experience as software engineer in different areas. The last 8 years he focused on Microsoft SQL Server, data warehousing and business intelligence. To enhance his professional...
View all posts by Stefan Hainzer >