For the past several years, I've noticed the commuting time increase due to worse congestion in the DC area. A news report coming out from WTOP (a  news radio station serving this area) earlier this year confirmed my observation. The report reviewed U.S. Census data for seven counties and cities in this region, and compared the percentages of drivers, public transit users and teleworkers, as well as the average commuting time in 2015 with those in 2009. The specific areas WTOP selected  included: D.C., Alexandria, VA; Arlington County, VA; Fairfax County, VA; Montgomery County, MD; Prince George's County, MD and Silver Spring, MD.

The following is a brief summary of the commuting patterns that data has displayed:

The above graph shows that average commuters, drivers as well as public transit users, from both Maryland and Virginia suburbs spent more time going to work. The longest average commute was in Prince George's County at 36.5 minutes- up for more than 1 minute from 2009,  followed by Montgomery County at 34.5 minutes-up from 33 minutes in 2009. Even though Arlington County had the shortest average commute at about 28 minutes,  it's up for two minutes from in 2009. Based on my experience, I believe the average commuting time in 2017 is definitely up from that in 2015. 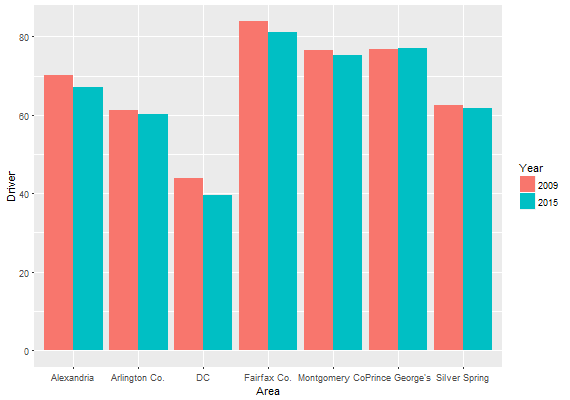 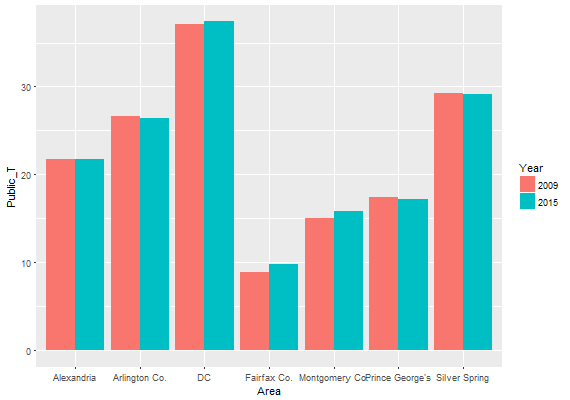 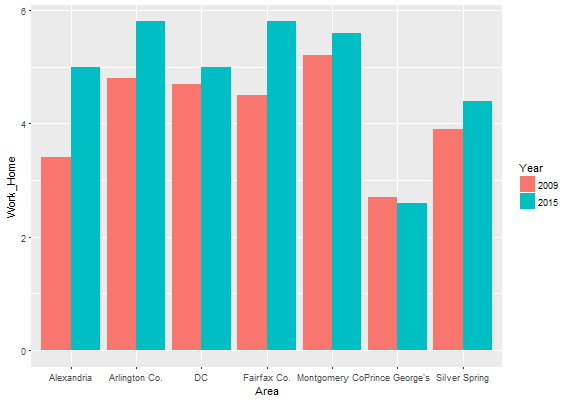 An interesting trend also emerged from the data: by 2015 more people in DC region said goodbye to morning commute because they worked from home. Fairfax county tied with Arlington county as the area with the highest percentage of teleworkers, 5.8%,   up from 4.5% and 4.8% in 2009 respectively. One exception is Prince George's County where the percentage of teleworkers in Prince George’s County was 2.6%, about the same as in 2009.

I created a shiny app based on the data and the above analysis. You can access it at https://maggiezou.shinyapps.io/DCcommute/