It appears clearly that after economic crisis after 2007 global downturn takes heavy toll in almost every corner of the world. Publics around the world are decidedly unhappy about their nations’ economies. Most are displeased with current economic conditions and concerned about rising economic inequality; few are optimistic about the coming year. However, at the same time, most global publics say their personal finances are in better shape than their national economies, according to a new 39-nation survey. I made shiny app to demonstrate visualization of world economy confidence. It includes world map of 39 countries. Each of their economic satisfaction are highlighted with color.

To categorize the 39 countries surveyed into three categories – advanced economies, emerging markets and developing economies – we started with the World Bank classification of countries by income.

Next, we used the absolute size of the economy as well as the relative wealth per capita to determine whether the emerging markets and developing economies were classified correctly.

Finally, we cross-referenced our coding of the countries against expert classifications, such as the International Monetary Fund. 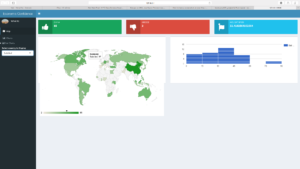 This is the main board of my shiny app. On top there are info boxes indicate highest and lowest score as well as average score of satisfaction rate. Highlighted nations has interactive box when mouse move upon them shows rate. 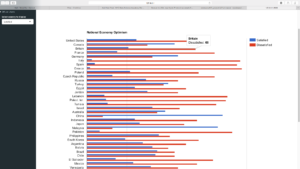 This is bar chart compare each countries satisfaction rates. Both "Satisfied" and "Dissatisfied" number. 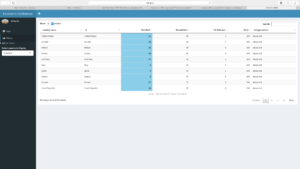 This is the dataset of 39 nations.

Across the globe, few are happy with the direction of their country – less than half in 34 of the 39 countries surveyed say things are going well. Satisfaction is particularly low in advanced and developing economies, while publics in emerging markets tend to be somewhat more content. 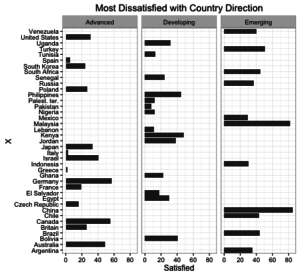 Among the advanced economies, only in Germany (57%) and Canada (55%) do more than half of those surveyed say their country is moving in the right direction. In most countries, a third or fewer are satisfied with their nation’s path.

Similarly, roughly four-in-ten or fewer in most of the developing economies surveyed say things are going well in their countries.

Overall, country satisfaction is somewhat higher in the emerging markets – at least three-in-ten in most countries say their nation is on the right track. Nonetheless, even among this group, few publics give positive reviews of how things are going in their country.

View all posts by Yehui He >

plumbingweb.com November 14, 2016
Hello I am so grateful I found your webpage, I really found you by error, while I was browsing on Digg for something else, Regardless I am here now and would just like to say many thanks for a marvelous post and a all round interesting blog (I also love the theme/design), I don’t have time to go through it all at the moment but I have bookmarked it and also added your RSS feeds, so when I have time I will be back to read a lot more, Please do keep up the excellent b.