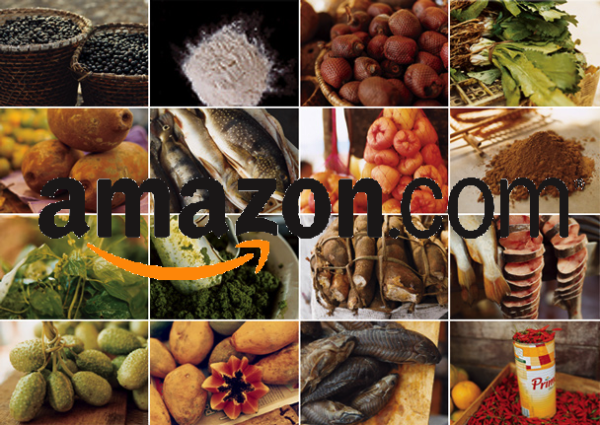 Contributed by Rob Castellano. He  is currently in the NYC Data Science Academy 12 week full time Data Science Bootcamp program taking place between April 11th to July 1st, 2016. This post is based on his first class project - R visualization (due on the 2nd week of the program).

Amazon reviews are often the most publicly visible reviews of consumer products. As a frequent Amazon user, I was interested in examining the structure of a large database of Amazon reviews and visualizing this data so as to be a smarter consumer and reviewer.

Note: All data analysis and visualizations here were produced in R. The code can be found on GitHub.

An example of an Amazon review is pictured below. It consists of the following information: 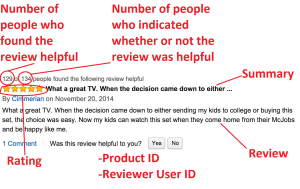 I used a database of over 500,000 reviews of Amazon fine foods that is available via Kaggle and can be found here. This database contains each of the elements of a review listed above, as well as time of the review and the user nickname, both of which I did not use.

It should be emphasized that all reviews considered are food reviews, so the reader should not consider the data representative of all Amazon products.

Data on Distribution of ratings 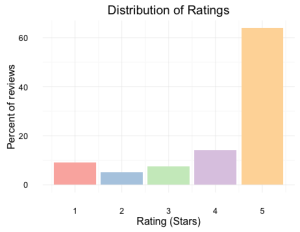 The code to produce these word clouds is included below. 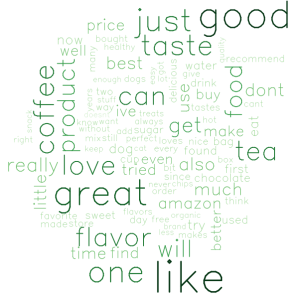 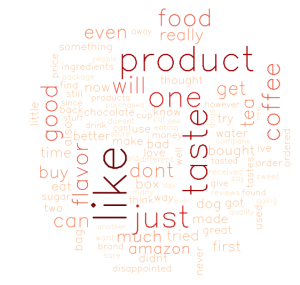 Reviews are voted upon based on how helpful other reviewers find them. The most helpful reviews appear near the top of the list of reviews and are hence more visible. As such, I was interested in exploring the properties of helpful reviews.

How many reviews are helpful?

Among all reviews, almost half (48%) are not voted on at all. I divided the reviews that were voted upon into three categories: Helpful reviews had more than 75% of voters find the review helpful, unhelpful reviews had less than 25% of voters find the review helpful, and an intermediate group of 25-75% helpfulness. This choice of division seemed to not have a larger impact on results; we will henceforth use this terminology to describe the helpfulness of reviews. Among reviews that are voted on, helpful reviews are the most common. 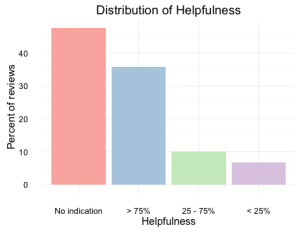 How do ratings affect helpfulness? 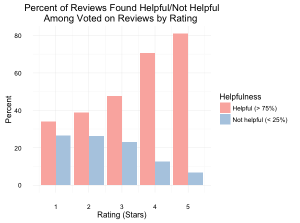 One of the most basic characteristics of a review is the number of words it contains. I wanted to see how word count related to the other properties of reviews already discussed, including rating and helpfulness.

How does word count vary by rating? 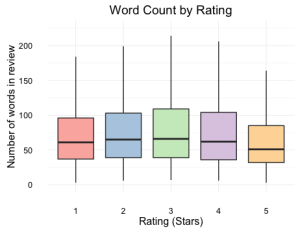 How does word count relate to helpfulness? 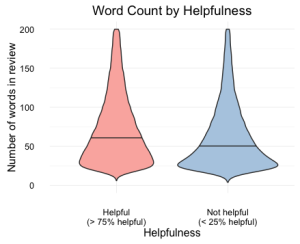 Using User IDs, one can recognize repeat reviewers. Reviewers that have reviewed over 50 products account for over 5% of all reviews in the database. We will call such reviewers frequent reviewers. (The cutoff choice of 50, as opposed to another choice, seemed to not have a larger impact on the results.) I asked: Does the behavior of frequent reviewers differ from that of infrequent reviewers? 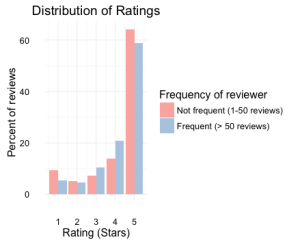 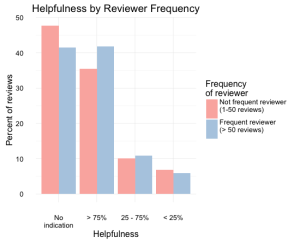 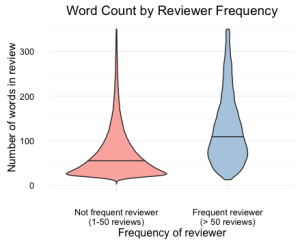