An invention brings something new into being and has a practical bent. When these inventions are registered as intellectual property – primarily patents, the resulting records provide valuable technological and geographic details. By gathering data on technology patents filed around the world through the United States Patent and Trademark Office (USPTO) in the last two decades, slicing and dicing the data by country and technology domains, and see changes along with the timelines, one can gain insights into the dynamics of a variety of tech domains at different countries.

For this reason, I created this Shiny app to help people easily visualize the dynamics of technology development, which will be particularly useful for business leaders, researchers, and policymakers. The patent data used for the app is published by the Organization of Economic Cooperation and Development (OECD).

Under the World tab, the users are first presented with a world map where they can hover over the countries and see how many patents are filed in each country in the year selected. Above the map, users can conveniently see the total number of patents, top country and top tech domain in terms of patent quantity in the year selected.

The second section under the World tab is a Leaderboard, which ranks the top 10 countries and all tech domains based on patent quantity in the year selected. 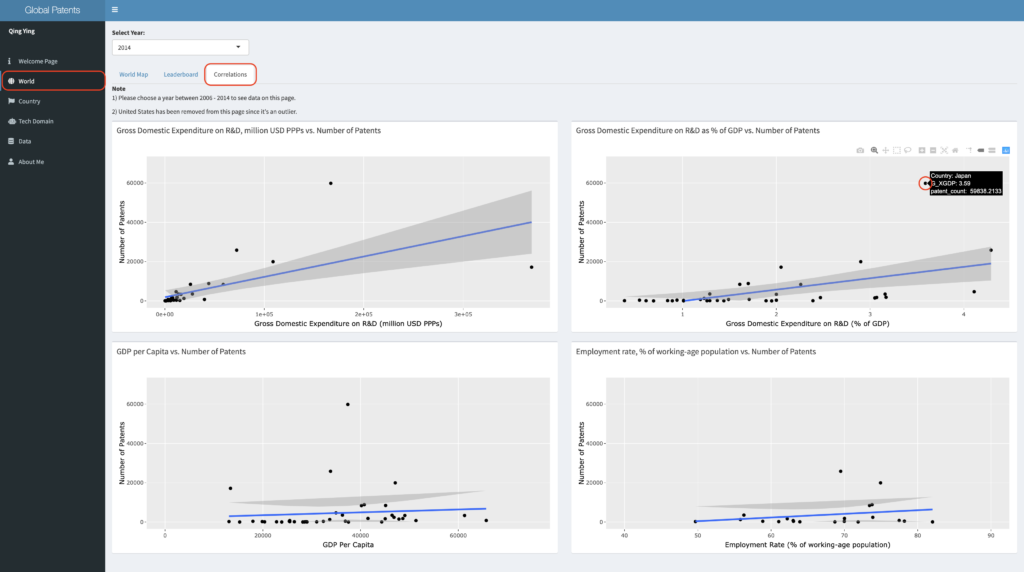 The third section under the World tab – “Correlations” – displays the correlation of patent volume with several important economic and demographic factors. The first plot shows that the number of patents of a country is positively correlated to its Gross Domestic Expenditure on R&D, with most of the data points congregated around below 250,000 million USD PPPs.

In the second plot, we normalize the Gross Domestic Expenditure on R&D for each country and represented the data by Gross Domestic Expenditure on R&D as a % of GDP, and the positive correlation with patents volume is even clearer, and the data points are more spread out. One interesting to note is that from the graph we can easily spot countries that yields a higher or lower number of patents (i.e. Japan, highlighted) compared to the expected value (the corresponding y-value on the regression line), given the country’s devotion of resources on R&D.

Under the Country tab, the first thing users can see is a graph showing the trend of each tech domain over the last 20 years in the selected country, the United States in this example. The banners on the top indicate the most prominent tech domain in the United States is Computer Technology, and the U.S is producing 45% of the total world patents overall. This gives people a good idea of how different tech domains have been trending in a given country.

The second section under the Country tab is a Leaderboard, which ranks all the technology domains based on patent quantity in the year and country selected. 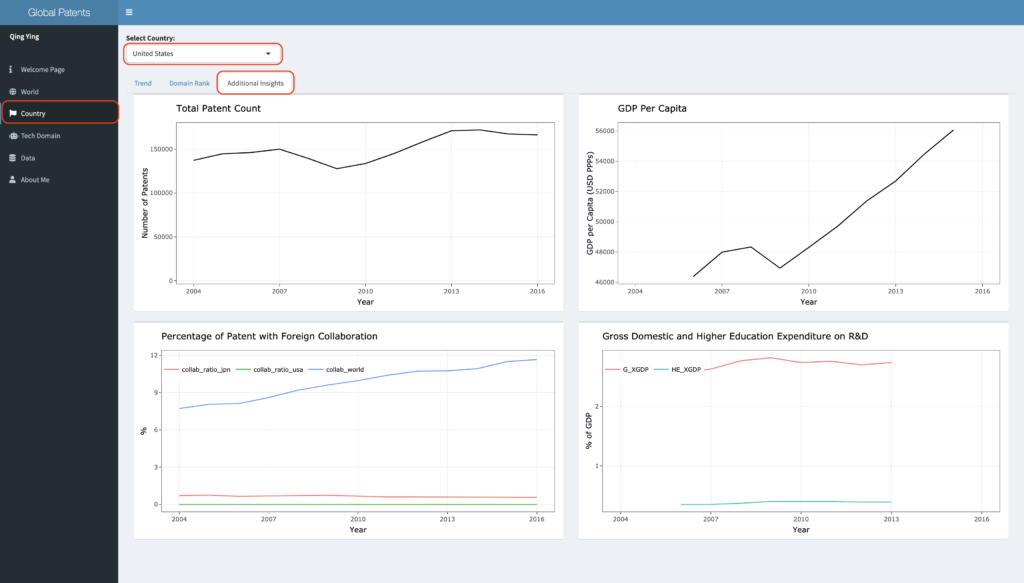 The third section under the Country tab – “Additional Insights”, displays the trend of several other technology indicators of a given country, together with the total patent volume throughout the years. For example, in the graph above, the top right plot (GDP Per Capita trend) showed that around the year 2008 the GDP Per Capita took a big hit, which makes total sense because that corresponds to the Great Recession. We can observe a similar dip in the patent volume around 2008 as well, meaning that the Great Recession, definitely had some negative impact on U.S.’s technology advancement as well. 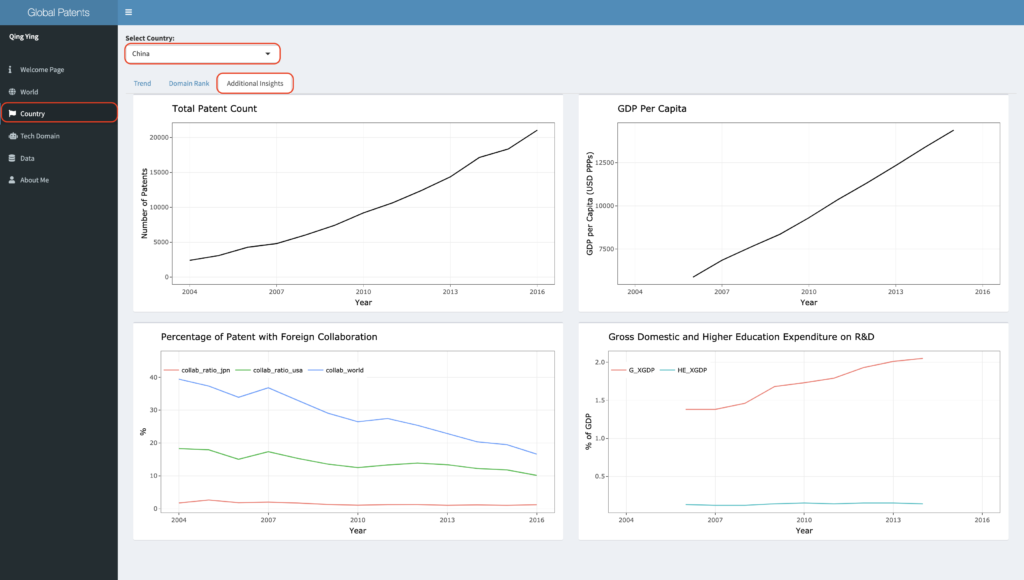 Let’s look at another example – China, we can immediately spot several unique patterns. Firstly, the GDP per capita and a total patent trend increase monotonously in the past two decades without any dips, which means China is on a high growth path in terms of tech innovation.

Another interesting thing to notice is that the percentage of patents with foreign collaboration has been continuously decreasing. This might indicate that China is shifting its technology strategy from relying on more foreign partners to forming a more closed-loop, independent entity when it comes to new patents. Notice how the United States is doing the opposite – its percentage of the foreign collaboration of patents has been on the rise.

This app is designed to help anyone who is interested in knowing overall trend in technology around the world in different countries and tech domains, understand which domains is each country focusing on through the years, and correlate the trend to interesting factors such as GDP per capita, level of collaboration with world, and other technology indicators such as Gross Domestic Expenditures on R&D etc. The World, Country, and Domain sections are separated in a way such that users have the flexibility to zoom in and out to examine the high-level trend as well as a specific country of domain and do further slicing and dicing.

Going forward, I would like to enhance this app in the following ways:

Thank you for reading my blog post and I hope you enjoyed it. Here is the link to my Github repository if you want to see the code. Please feel free to contact me via Email: [email protected] if you have any questions or would like to discuss further details.