Contributed by Ho Fai Wong. He  is currently in the NYC Data Science Academy 12 week full-time Data Science Bootcamp program taking place between April 11th to July 1st, 2016. This post is based on his second class project - Shiny visualization (due on the 4th week of the program).

In my particular case, I was curious how the French "Grande Ecoles" performed in these international university rankings since I had studied in one. My initial perception was that these prestigious schools are very well-regarded in France, but relatively unknown overseas. Can the 2015 world university rankings from these 3 organizations confirm and provide additional insights to this assumption?

You can try out the application yourself here.

All the code is on GitHub here.

Kaggle provided the multi-year international university rankings in separate CSV files. I focused on the 2015 rankings, which covered a total of 1015 institutions across 61 countries:

Considerable cleanup was required before building the Shiny application:

The Shiny application has 3 main sections:

The first tab of the application summarizes university ranking key metrics by country. The user can select which ranking organization's data to display, followed by which specific metric to represent as each country's color (e.g. top rank, median rank, etc). Since each organization used different scoring criteria, the list of metrics will change depending on the user's selection of the ranking organization (using a conditional panel). Definitions for these criteria can be found on the Reference tab. 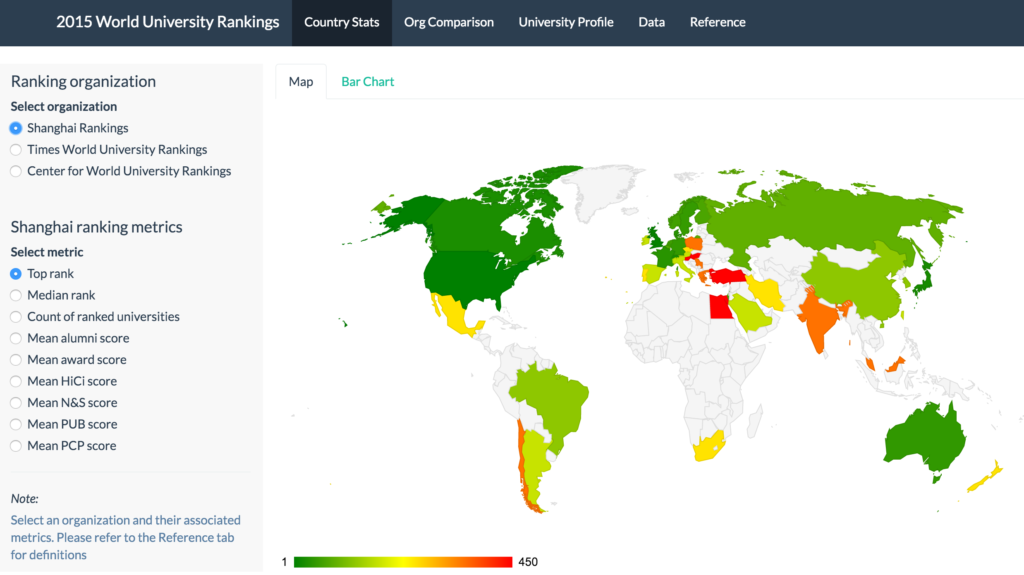 The same data, filtered by the same selections on the left panel, is also displayed as bar charts with ordered countries. 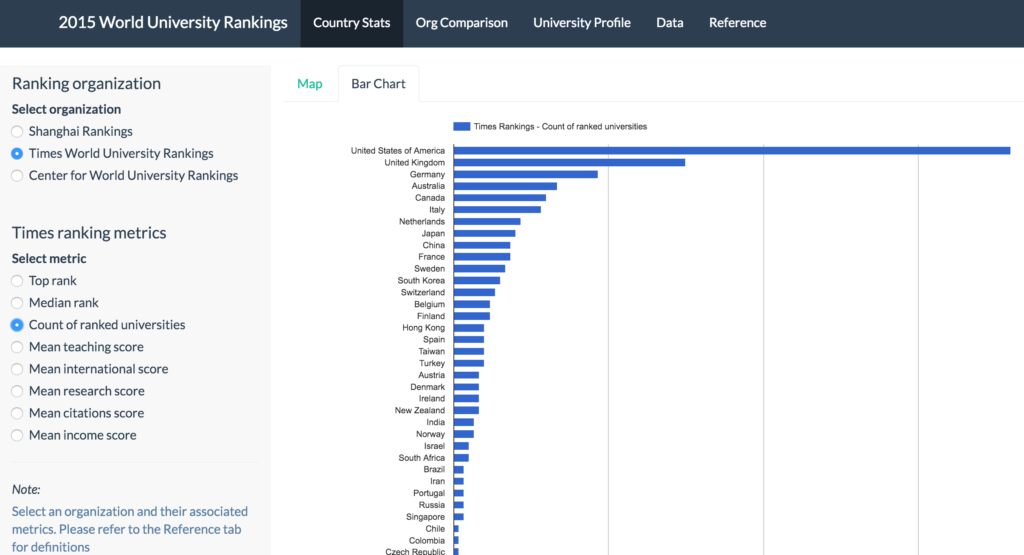 It becomes apparent that, depending on the ranking organization selected and criteria considered, a country's universities could perform quite differently in these assessments. For example, while the United States retains the top-ranked university in all 3 rankings, Russia's top university dropped by 110 positions between the Shanghai and Times rankings.

Let's look closer at the comparison of rankings between these 3 organizations.

The second tab of the application compares university world rankings between organizations on a scatterplot which can be customized by the user to gain specific insights. The user can:

In addition, the diagonal line represents the case where both organizations assigned the same rank to the university. Conversely, the farther a point is from the line, the greater the discrepancy between the organizations' assigned ranks for that university. 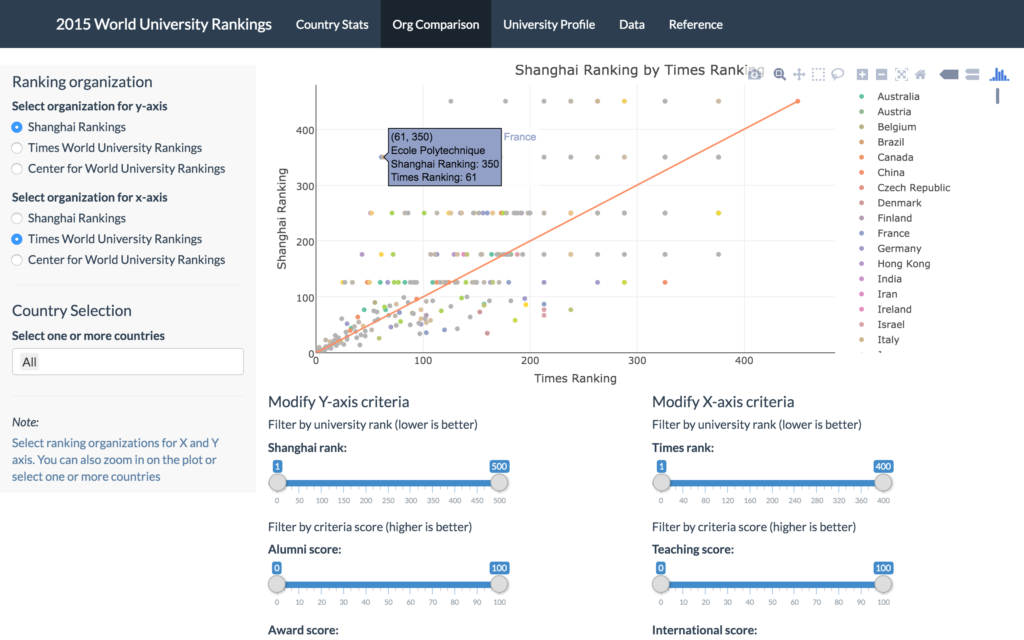 Just looking at the comparison of Shanghai against Times rankings, quite a few universities are positioned far from the diagonal line i.e. there is a large difference in how each organization ranked them. For example, Ecole Polytechnique (one of the most prestigious Grandes Ecoles in France), was ranked 61 by Times and 350 by the Shanghai ranking!

Using the sliders to filter on each organization's metrics can also lead to interesting observations. For example, according to the Times rankings, the United States of America seems to have very few universities with a high "international score" compared to other countries (only MIT in the USA has such a score greater than 75)...

Let's look at specific universities to compare how each ranking organization's criteria scoring coincide with or differ from each other.

The third tab of the application displays, for a selected university, the world rankings by each of the ranking organizations along with the scores for the underlying criteria. As described earlier, the CWUR data contained ranks for their criteria whereas the Shanghai and Times data contained scores (from 0 to 100). For consistency and ease of comparison between the ranking organizations, CWUR criteria rankings were converted to scores out of 100: score = (1-rank/max)*100. 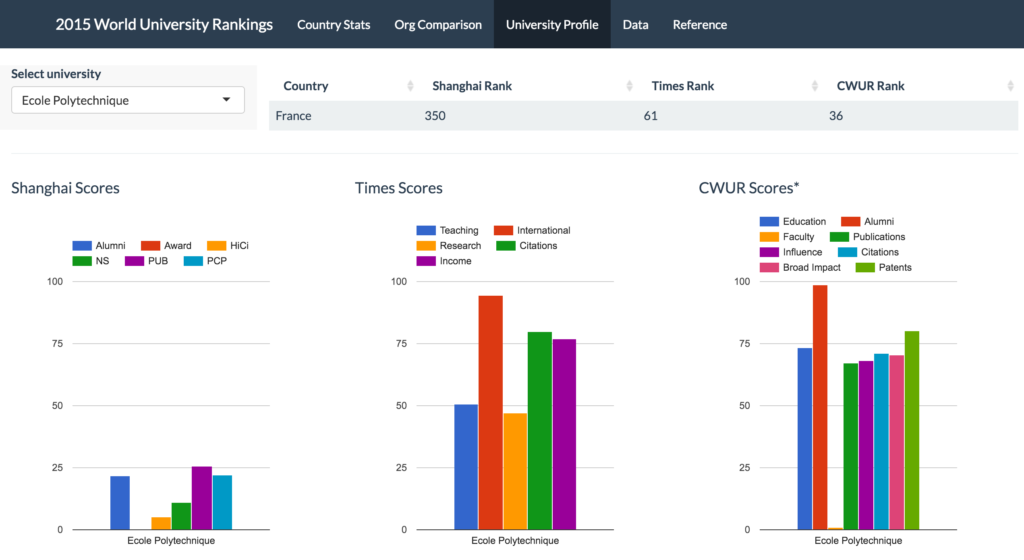 A user can select a specific university to see and compare how each organization assessed that institution using their respective criteria. Keeping the example of Ecole Polytechnique, this university scored much lower in the Shanghai rankings than the Times rankings; the former places a much heavier emphasis on research and publications whereas the latter also considers international outlook and industry income.

The Data tab allows a user to search for a specific country or university and obtain the world ranking data in tabular form for each of the 3 ranking organizations.

The reference tab contains background and comments on the data preparation which I mentioned at the beginning of this post. I also included here a graphical view of the difference in universities in scope across the 3 ranking organizations, as well as correlation plots for each of the ranking organizations' criteria.

Hopefully, this Shiny application can help you explore world university rankings from the Shanghai, Times and CWUR rankings: look up your own university, compare institutions for future students and see how rankings and criteria scores vary depending on which organization assessed the institution!

One of the main takeaways here is that, before making any definitive statements or decisions based on these rankings, one needs to understand precisely how each organization's criteria are defined and universities assessed against them. Standardizing such rankings is complex and can often be controversial:

Possible future steps for this project would be carrying out statistical analysis to investigate the impact and importance of each organization's criteria, and potentially designing a more balanced ranking framework.

In the meantime, please feel free to explore this application and glean more information on the 2015 world university rankings (and discrepancies between ranking organizations...). If you have any comments, suggestions or insights, please comment below!