The  airline industry is one of the biggest contributors to US economy. In 2016, the airline industry profits have reached $36 billion, and by the end of 2017, it was estimated that net profit will reach $30 billion. While there has been a lot data in recent years showcasing the rise in airline profits contributed by higher flight prices, identifying the causes for flight prices have still been pretty elusive. For frequent flyers, understanding how airlines structure their prices can allow them to use cost saving strategies to purchase flight tickets.

To understand more about what factors contribute to flight prices, data was scraped from the website TripAdvisor which collects many information such as different airline flight prices, flight dates,  arrival and departure times, flight duration, flight scores,  and flight customer-written reviews of flights. A typical page is as follows: 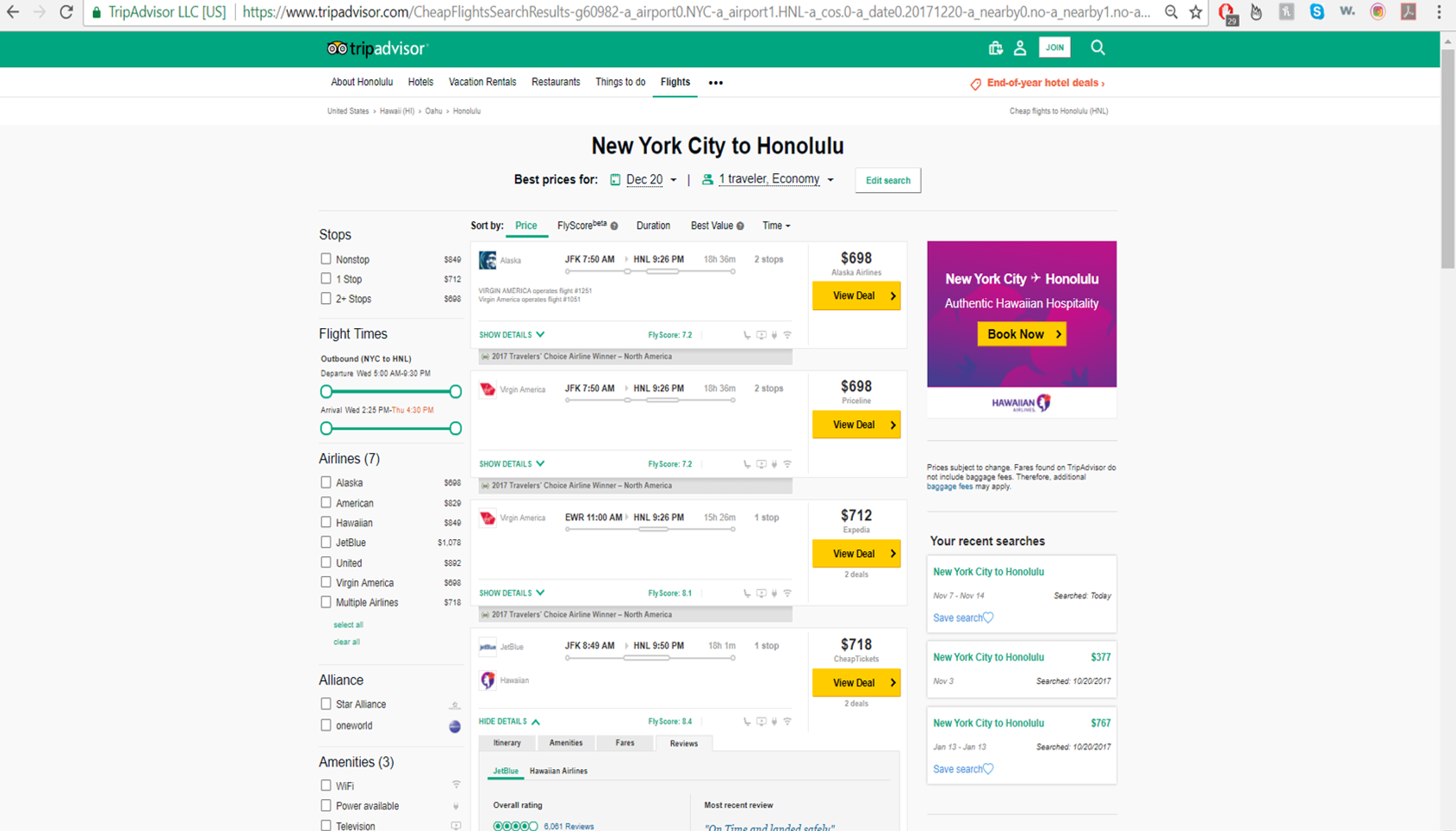 A python script which uses Selenium defines a web scraping spider that scrapes information from the website and convert it into an analyzable format. Selenium was chosen as the package to scrape TripAdvisor rather than the faster package Scrapy because the website was a dynamic page. This meant that the web page displays  flight information which changes after a certain time frame. In addition, Selenium could handle information in click-on popups better. The code could be  found on Github .

Data was gathered for one way trips departing from New City to the top destinations in United States: Los Angeles, Honolulu, San Francisco,  Miami, and Las Vegas during a one month period, December to January. Around 3,000 pages were scraped to produce 47805 observations and 9 features.  The features I included in the scrape were:

One thing to note is that on some flight entries, there were missing flight flyscores which meant that these features would be replaced by 'NAs'.

As seen from the above time series, travelling to Honolulu is almost double the price than any other destination throughout the one month period. This makes intuitive sense as Honolulu is one of the most popular tourist place in United States and fewer US airlines travel from other cities to Honolulu. As a result of the relative larger demand to supply of airline flights to Honolulu, flight prices are much higher for Honolulu than other destinations in United States. Another interesting feature to note is that flight prices have a decreasing trend from the respective time frame between middle of December to middle of January. This trend is partly due to the fact that there is a large demand of flight travelers before Christmas; hence the more expensive flight prices. After Christmas and New Year, the demand for flights decrease and thus the decreasing trend of flight prices.

When looking at time series of flight prices broken down by different airlines, we can see that the average prices exhibit very high volatility in a day to day basis. However, we can see that large airline corporations such as United, American, and Jetblue  have flight fares which are almost twice as expensive compared to smaller airline corporations such as Frontier and Sun Country for . If we investigate fleet size, number of destinations, and daily departures between the bigger and smaller airlines, we find that the bigger airlines have 10 times the number of airplanes, about 5 times the number of travel destinations, and 200 times the number of daily departures. This means that larger airlines  dominate a larger portion of the airline industry and capture more of the consumer base; allowing them to increase flight prices relative to smaller airlines. 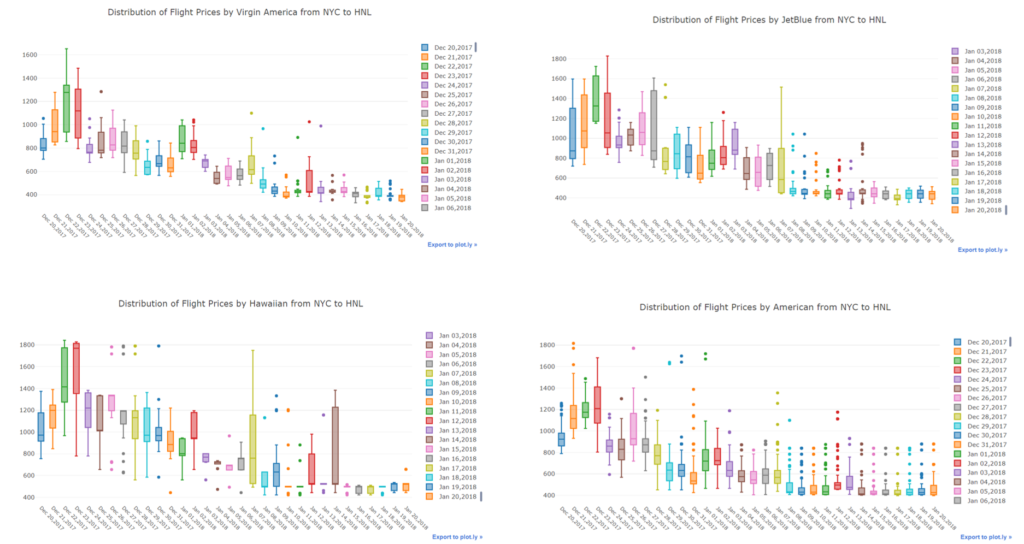 We have observed a wide range of flight prices broken down by airlines in the aggregate time-frame between December to January. An interesting observation I found while scraping TripAdvisor was that airlines set different flight prices on a given day for the same flight. This observation could be visualized above in the distribution of flight prices by airlines and date. In order to understand why airlines set different prices on a single flight, I did further research. In my research, I found that airlines will segment a certain amount of seats with different prices to target different types of flyers. There are two different types of flyers: business and leisure. For business flyers, prices are flexible for them because the company pays for their trip or they can afford the higher prices. On the other hand, leisure flyers look for relatively cheap flights. In order to maximize profits, airlines appeal to those who are willing to pay more as well as those who settle for lower cost. As a result, they would use booking data to find the right combination of number of seats and price brackets for the seats.

For example United Airlines is known to increase the number of seats in airplanes; up to 250 seats for a domestic flight and thus allowing them to set more high price brackets to cater more to business flyers. They even have a class within economy class called economy plus to increase the flight prices for those seats.

Despite the fact that there are a myriad of factors that impact  flight costs, flyers can develop cost saving strategies by understanding the structure of flight prices and identifying flight price trends. One strategy to obtaining low airline prices is to book early for big airlines so that there are still available lower price bracket seats. The other option  would be to book smaller airlines where generally prices are cheaper than bigger airlines but at the cost of worse flight experience.

This project only scratches the surface in understanding flight prices and the factors which impact them. Future work could include predicting flight prices based on these sets of features as well as other features taken from weather and economic data. More features would help to develop an accurate machine learning model such as random forest to predict flight prices.  To take it further, I'd like to employ natural language processing to see whether customer reviews and ratings have an effect on flight prices and what features do customers really want in a flight experience. The insights from that study could lead to better improvement for flight experience and also maintain growth of profits for airlines.