Exploring Mortality by Drug and Alcohol Use in the United States

Over the past 30 days alone, the New York Times has authored and posted about 30 articles related to the “opioid epidemic” that has swept across the US, taking lives indiscriminately. According to both the Center for Disease Control and the National Institute on Drug Abuse, more than 90 Americans die each day as a result of opioid induced overdoses. Similarly, between 2006 and 2010, excessive alcohol consumption was the primary cause for about 1 in 10 deaths among Americans aged 20-64 years.[1] Even more striking than the numbers themselves are the accounts that have been widely disseminated in recent years, detailing the profound impact that substance abuse has had on individuals, families, and communities alike. One such account published by the New York Times describes the impact that widespread drug abuse has had on communities throughout the Bronx, one of New York City's five boroughs. The article can be found here. For more information on drug and alcohol abuse as a public health issue, please see the links below.

Substance abuse, particularly opioid abuse, is indisputably one of the largest public health issues in America right now. As a pre-med student turned public health enthusiast, I find the complexity of this issue quite compelling. Pulling from CDC data on drug and alcohol related mortality in the US, I created a shiny app that allows users to explore some of the key trends spanning across the years 1999 and 2015.

Using the CDC’s WONDER database query system, I pulled four datasets ranging in size from about 10,000 to 30,000 observations. These datasets provide information on the number of drug and alcohol related deaths that have occurred between 1999 and 2015 grouped according to the state and years in which they occurred, as well as the racial/ethnic group, sex and age group to which the deceased belonged. 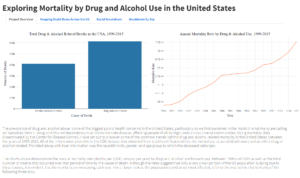 The CDC obtains drug and alcohol related mortality data from death certificates in which the immediate cause of death can be linked directly to drug and/or alcohol use. Excluded from the data are deaths occurring due to medical conditions which may have been induced by drug use as well as deaths occurring within undocumented populations.

At the CDC’s suggestion, death counts of fewer than 9 were removed from the datasets used in creating this app. Mortality rates visualized throughout the app were calculated per 1,000 persons per year and were converted to percentages where appropriate.

The two charts within the application’s first tab visualize the total number of drug and alcohol related deaths that have occurred between 1999 and 2015 as well as the annual mortality rate for each year between the start and end points. Over half a million drug-induced deaths alone have been recorded over the 16-year period, with the rate of death for both causes increasing steadily each year.

Mapping Death Rates Across the US 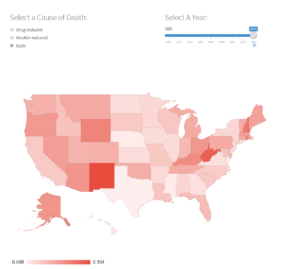 This tab contains an interactive map displaying the percentages of drug and/or alcohol related deaths in each US state. The map visualization can be manipulated using the radio buttons and slider bar directly above to assess geographical differences over the given period in terms of the most prevalent cause of death and the states that are most affected. The map has an animation feature that allows users to easily observe the way the map changes over time from any desired start point. This feature can be utilized by clicking on the play button beneath the slider bar and is also made available within the two following tabs. 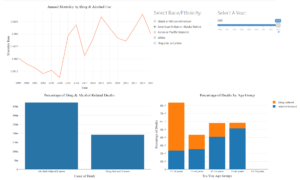 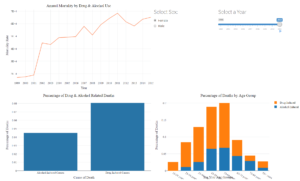 The third and fourth tabs of my application provide a visual breakdown of rates and percentages of death by race/ethnicity, age group and gender. The three charts within the “Racial Breakdown” tab represent the annual mortality rate by drug and alcohol use, the percentage of deaths by drug versus alcohol use and the percentage of deaths within ten-year age groups and according to the cause of death. Each of these plots respond to the radio buttons specifying race/ethnicity whereas the year slider only affects the two charts on the bottom of the page. The charts within the “Breakdown by Gender” tab are set up identically, yet provide another angle for analysis at a more aggregated level.