Exploring Response of Biomarkers in a Clinical Trial

Biomarkers are widely used in clinical research and their presence as primary endpoints in clinical trials is now accepted almost without question. What is a biomarker? According to FDA, a biomarker is a characteristics that is measured as an indicator of normal biological processes, pathogenic processes, or responses to an exposure or intervention, including therapeutic interventions. Molecular, histologic, radiographic, or physiologic characteristics are types of biomarkers. A familiar example is the use of blood glucose levels as a biomarker to measure the effectiveness of a diabetes medication.

This study looks at the way in which biomarkers were used in one study to uncover which biomarkers change as a result of medication, and which biomarkers can be used to predict adverse effects.  In a Phase I clinical trial, 39 healthy volunteers enrolled in a study and were asked to take a pill daily. Measurements of 20 different biomarkers were collected before the subjects started taking the pill (week 0) and on a weekly basis thereafter (from week 1 to 8). The values of some biomarkers might change as a result of the treatment and thus reflect the effectiveness of the pill. 12 volunteers had an adverse event while on study. Adverse event is any unfavorable and unintended sign, symptom, or disease temporarily associated with the use of the pill, whether or not considered related to the pill.  The change of some biomarkers might show certain patterns before the event and therefore help to predict the occurrence of the later event. This prediction could be useful in deciding whether and when a volunteer should stop taking pills during the course of treatment. To sum up, two questions that are of interest: 1) What biomarkers are changing as a result of the treatment? 2) What biomarkers might work as indicator of the adverse event?

What biomarkers are changing as a result of the treatment?

When comparing measurements of all biomarkers during the treatment (week=1-8) with the corresponding measurements before taking the pills (week=0) in the line chart below, it seems that the values of biomarker M1, M2, M3 and M4 generally increase during the course of treatment.   There appears to have positive linear dependence between values of M1, M2, M3, M4 and length of treatment. The rest of the 20 biomarkers instead show no significant difference between weeks. As such, M1, M2, M3 and M4 might have shown response to the treatment. 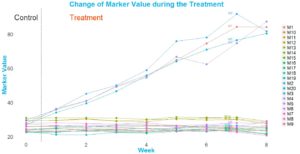 To further check the change of M1, M2, M3 and M4, the standard deviation of those biomarker values were plotted in the line chart below. There is large standard deviation for M1, M2, M3 and M4, which would potentially make the between week difference of those biomarkers not significant. However, those measurements could be further normalized by taking the ratio of Marker Value during treatment (Week = 1-8) and Marker Value as control (Week=0). There are a few Marker Values at week=0 equal to 0. As such, both the numerator and denominator of the normalized marker value is added by 1, and the new normalized metric named Fold is, 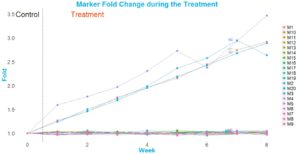 The line chart of Fold vs Week is shown below. As compared to the chart of Marker Value vs Week above, the standard deviation for M1 and M2 have become much smaller when tracking the Fold change during the treatment. However, M3 and M4 still have relatively large standard deviations, which might be caused by some large outliers. Based on the Fold change during the treatment, M1 and M2 might work as better biomarkers in response to the treatment since they have less variance between volunteers. 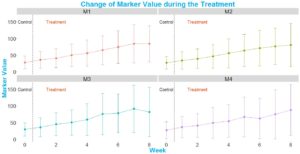 What biomarkers might work as indicator of the adverse event?

To study which ones of the M1, M2, M3 and M4 biomarkers’ changes are COnrelated to adverse events, the volunteers were grouped by whether they had an adverse event or not during the course of treatment. 12 of them who had an event were grouped together and labelled with Event=1 and the left 27 were grouped with Event=0. The two groups were compared in the line chart below. 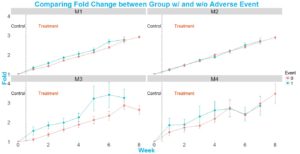 Since the adverse effect occurred at Week=4, 6, 7, the box-and-whisker plots below drill down and further analyze the between group difference one week before the event. The distribution of Marker Fold for M1 at Week 3 and 6, and that for M3 at Week 3, 5 and 6 appear to be different between groups. Since the sample size from group with event and group without event are not equal, Welch’s two sample t-test is applied to examine those differences. However, none of the 12 pairwise differences demonstrated in the chart below are statistically significant at alpha=0.05 level. It’s worth noting that 12 of those 24 distributions shown here have some outliers beyond the reach of whiskers. For instance, in the group without event at Week 6 for M1, there are three outliers above the upper whisker of the box.  The sample size for each group is between 12 and 27.  Therefore the influence of even one outlier to the group mean might be significant.  If those outliers are removed, the sample mean from this group will be smaller and its difference with the sample mean of group with event will get bigger. Then the two sample t-test might have to accept the hypothesis of difference of mean between groups. 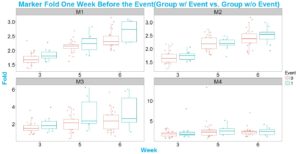 M1,M2,M3,M4 might work as biomarkers that respond to the treatment.

M1 and M2 might be used as predictors for the adverse event.

There are some outliers that need to be further understood.