Although most of us may never have the opportunity to leave the bounds of Earth, we can still explore materials which originated from outer space. I’m talking about meteorites. Meteorites are essentially space stuff— bits of debris from celestial objects, like comets and asteroids (even pieces of other planets and moons), which have survived the trip through space all the way to the surface of a new planet or moon. The NASA Open Data Portal provides a dataset with detailed information on over 30,000 terrestrial meteorites, sourced from the Meteoritical Society. You can explore this data yourself with this interactive web application:

This app was built using R Shiny. You can check out the codebase on github.

Meteorites vary greatly in size, shape, and composition, as well as in where, when, and how they are found. This dataset provides information on:

Meteorites can come from a variety of celestial sources, and can land anywhere around the globe. However, there are some interesting trends in where meteorites are recorded. For starters, check out the map below: 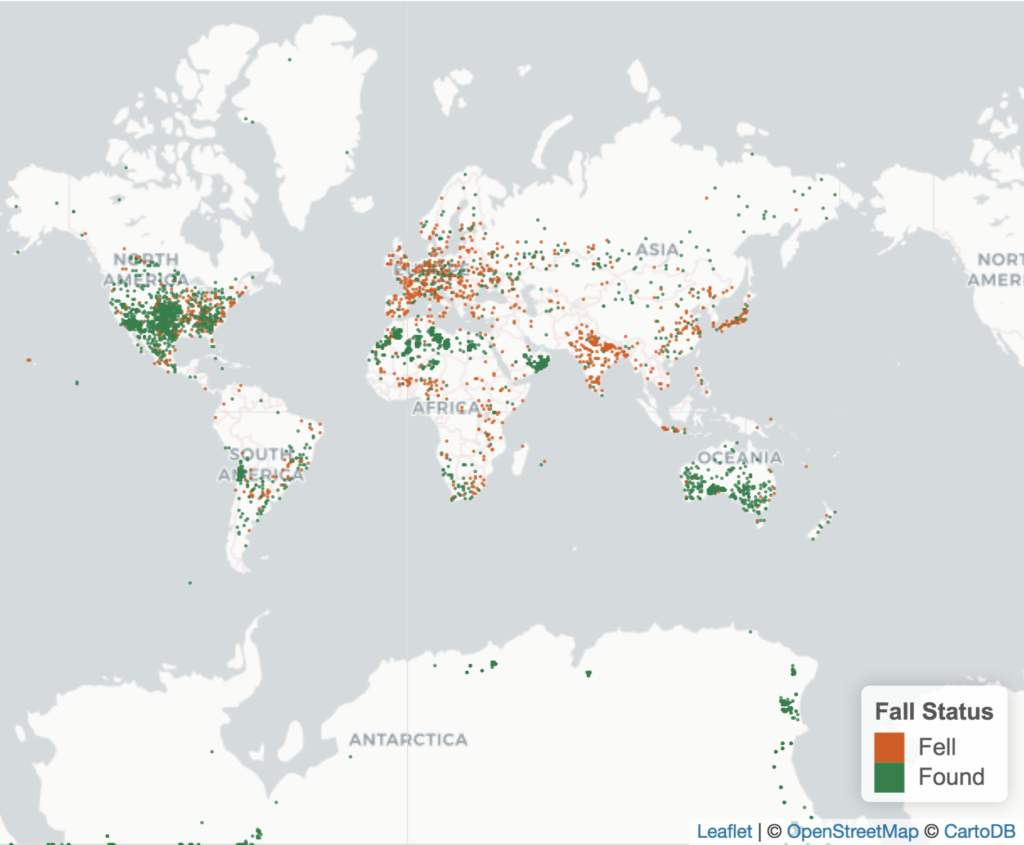 A few things jump out:

There are are no meteorites in the oceans

Perhaps the most obvious feature of this graph, that there are no meteorites recorded in the oceans, also has an obvious answer: once a meteorite lands in the ocean, it will quickly be lost to the depths where it is unlikely to ever be found by a human and recorded.

There are far more “found” meteorites than “fell” ones

Of the approximately 32,000 meteorites mapped in this dataset, nearly 31,000 are found. There are a few factors at play here. In order for a meteorite to be categorized as fell:

However, a found meteorite need only survive the fall to earth and then lie undisturbed until it is discovered, deduced to be a meteorite, and recorded. The latter is far more likely.

A closer look at the numbers: meteorites by country

Where to hunt for meteorites

One of the key factors for determining a successful meteorite hunting-ground is climate: arid climates are the best for preserving meteorites after they land. The longer a meteorite is preserved, the greater the likelihood is of it being discovered. It’s thus no surprise that countries like Antarctica, the French Southern Territories, and Oman rank at the top of list. However, the numbers in countries such as South Africa, Argentina, and Chile are less expected. Upon further inspection, we see that the majority of meteorites recorded for these countries were actually found in regions of Antarctica that they have laid claim to. For example, see the meteorites assigned to Argentina below: 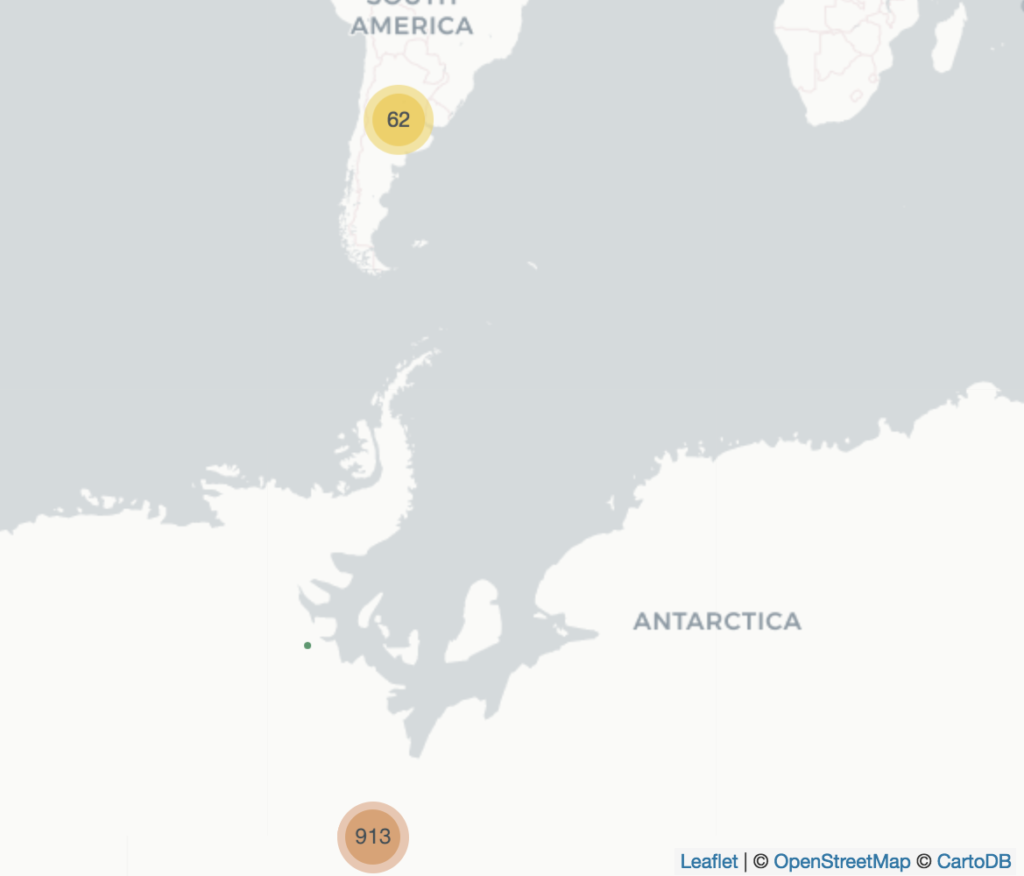 If we treat all meteorites on the Antarctic continent as “Country: Antarctica” we see that this covers closer to 70% of the total dataset. In addition to climate, there are a few other reasons why so many meteorites are discovered there. For one, meteorites tend to be dark in color, which causes them to stand out against the snow white surfaces in Antarctica. Perhaps more importantly, most of the surface of Antarctica is made up of ice sheets that can regularly melt to reveal meteorites long since buried.

In addition to location, we can also explore the distribution of masses amongst meteorites. When we plot these in a histogram, we see that the vast majority of meteorites are quite small (under 200g). One possible reason for this is that the process of traveling through Earth’s considerable atmosphere takes a serious toll. Most meteors (objects in the process of falling to Earth) never make it all the way to the surface but are instead completely “burned up” or blown apart. Those that do survive may languish on the ground for many years before being discovered (recall that most meteorites are found), during which time they can erode significantly. 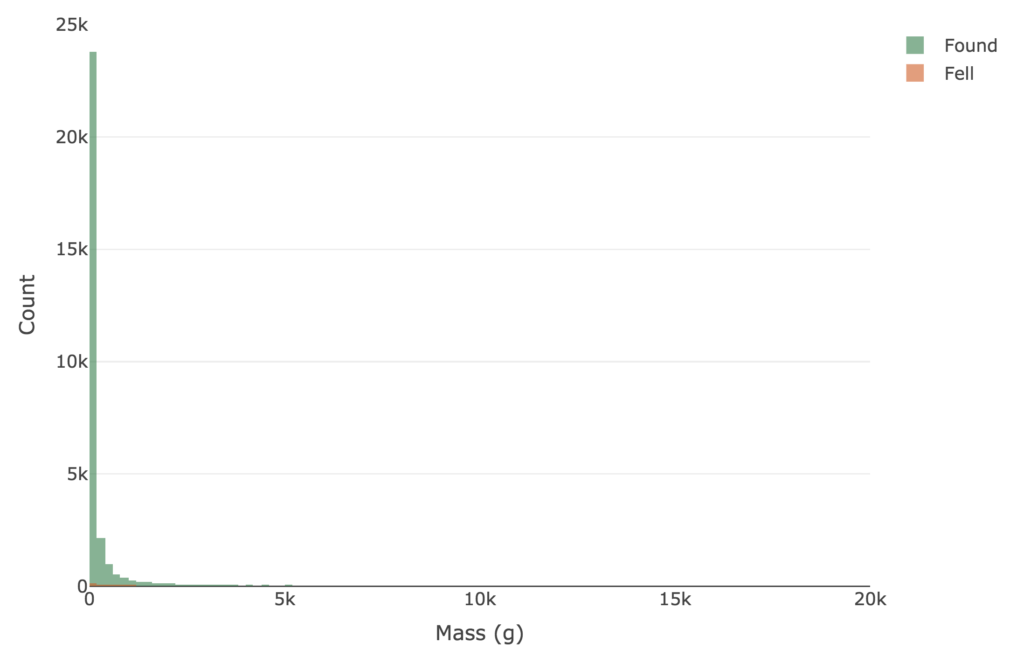 Next, we examine how many meteorites have been found over time. When we plot meteorite records by year, it’s clear that the vast majority of meteorites were recorded in the past two centuries. It’s reasonable that over time methods for discerning meteorites, as well as keeping standardized records, would improve. 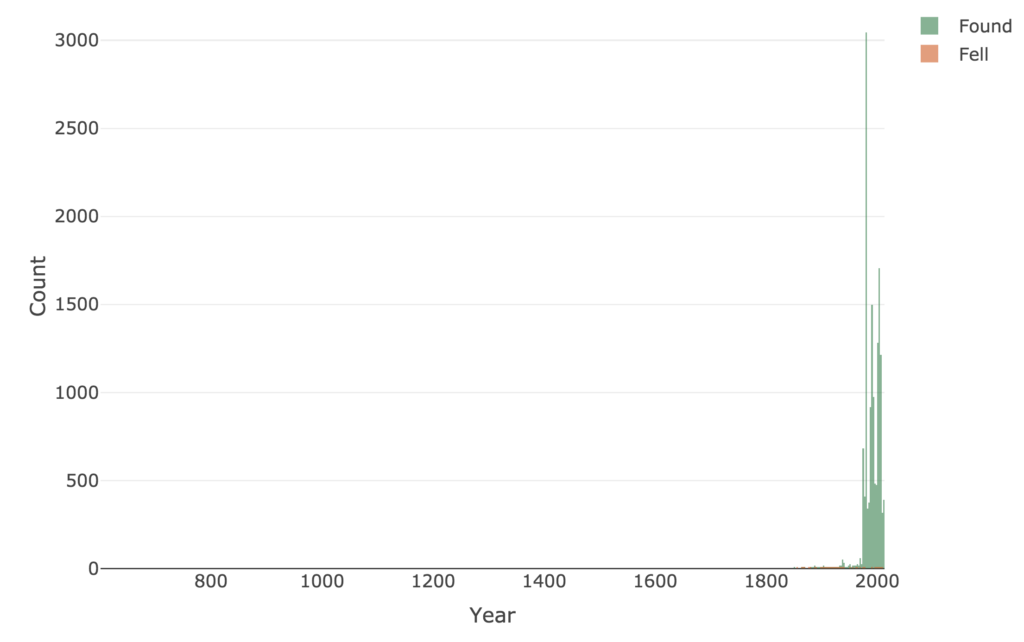 If we dig a little deeper, we see that the number of meteorites recorded per years begins to rise significantly in the late 1970s. 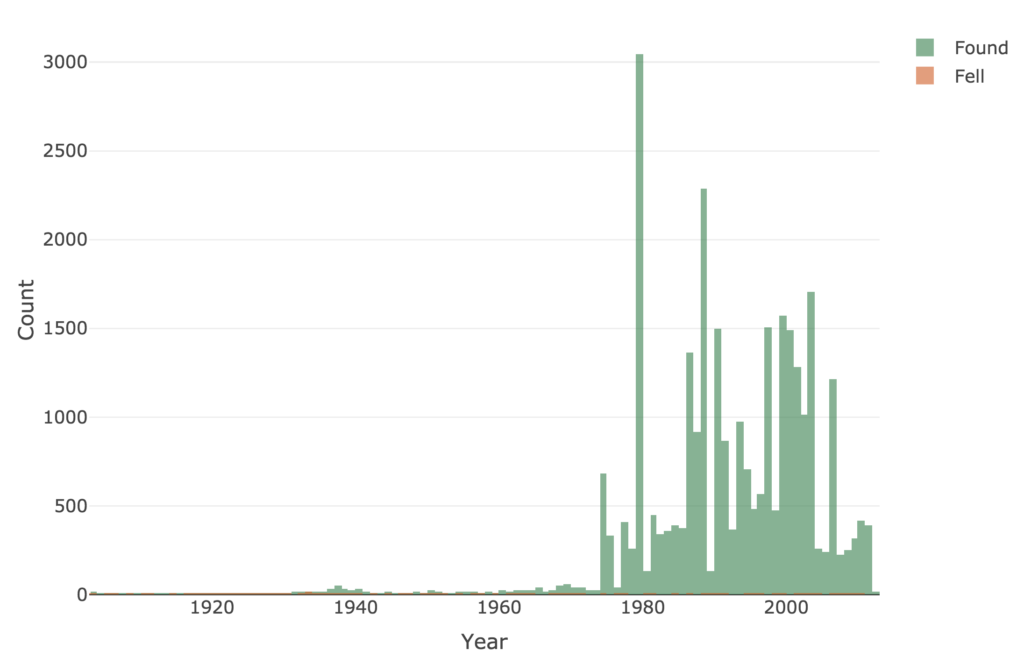 When we narrow the scope of the histogram to only meteorites found in Antarctica, we see that they account for a large portion of this trend. 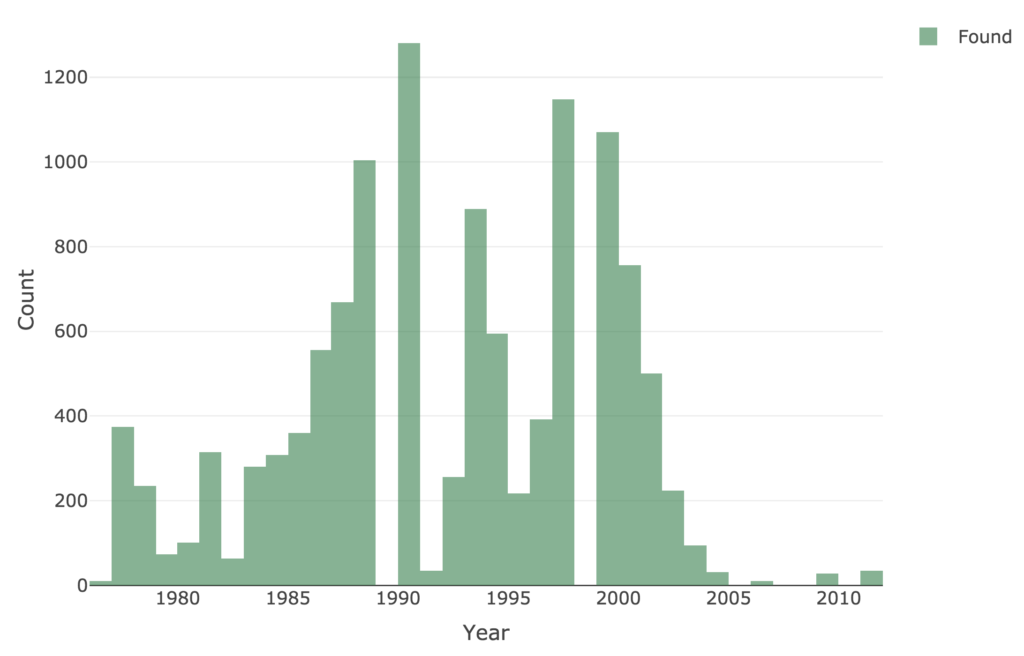 Another notable uptick in meteorite discoveries is visible in Oman, where the pursuit of meteorites in the desert has grown in popularity since the late 1990s. 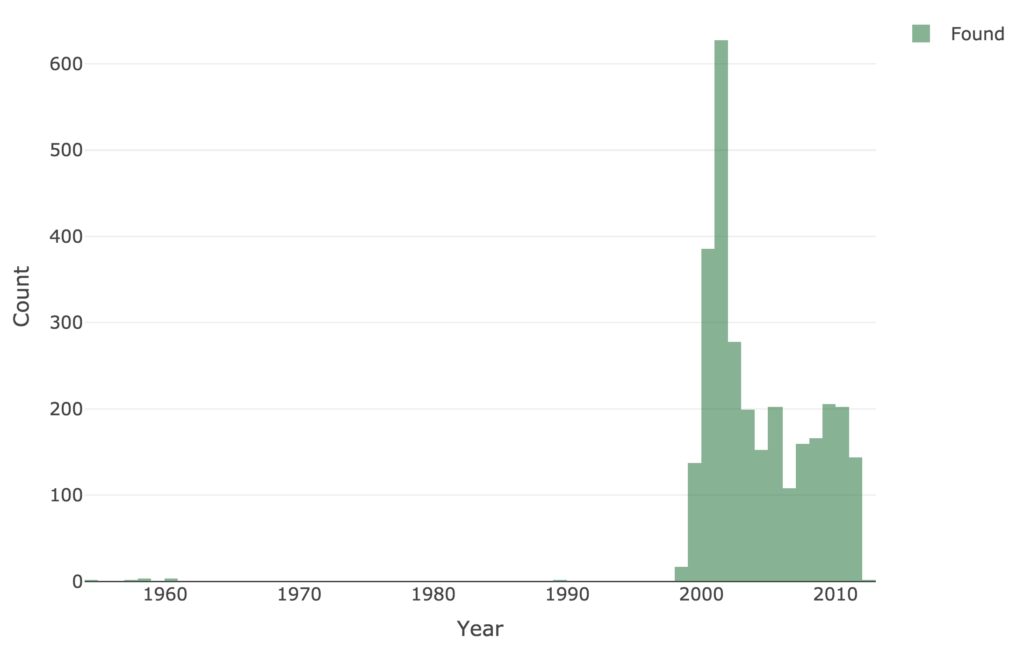 Meteorites are classified according to their physical and chemical properties. The most common classes of meteorites by count are detailed below.

The L and H group meteorites above, which account for 80% of all meteorites, are both subclasses of chondrites. The similar compositions of chondrite meteorites provide valuable insight into what materials are common in our solar system. Learn more about meteorite classification here.

To learn more about meteorites, explore the app here. To get a look at the underlying code, check out the repository on github.

Julie Levine has a BSE in Chemical and Biomolecular Engineering from The University of Pennsylvania. She has worked in a variety of roles in marketing and product management at tech companies including Factual and Datadog. Currently, she is...
View all posts by Julie Levine >