For this web scraping project, the user reviews of three drugs were scraped from the website WebMD and analyzed to gain further insights into public opinions expressed on these class of anti-depressant drugs. Aggregating data directly from patient reviews produces insights into patient satisfaction not obtainable through clinical trials -where the focus is determining the safety and efficacy of the drug - and provides a few facet of data that can be used ensure that the patient is prescribed with the medication that would be the most effective for them. Medical professionals could use this information when making decisions about which medications to prescribe and to whom. Pharmaceutical companies may also use this information to better tune their marketing strategies, focusing their efforts on demographics that respond best to any particular treatment. In parallel, this data may help Pharmaceutical R&D centers identify where their current portfolio of products are lacking and plan for future products accordingly. To highlight the potential of these methods, 'Customer Behavior change' and 'Growth of consumerism' in health care are among the top five in perceived opportunities amongst Pharma company directors surveyed in a 2017 Healthcare Marketers Trend report.

The reviews of three SNRI (Serotonin-Norepinephrine Reuptake Inhibitors) were scraped for this project: Cymbalta (Duloxetine by Eli Lilly), Effexor (Venlafaxine by Pfizer), and Pristique (Desvenlafaxine also by Pfizer). SNRI medications work by blocking the reuptake of neurotransmitters and are effective for treating depression and are also sometimes used to treat other conditions such as anxiety disorders and long-term pain. These three medications were selected because of the relatively high number of reviews on WebMD, and since all SNRI's work in a similar way, side effects are more comparable.

Each review yields the following information

After collecting and cleaning the data, the initial exploratory analysis indicated that the mode demographics of each drug were the same. Females, between the age of 45 and 54, being treated for depression were the most common demographic for all drugs. In regards to satisfaction rating, all three drug satisfaction ratings were wide-ranging, with mean satisfaction rating at 2.9, 3.1 and 3.1 for Cymbalta, Effexor, and Pristiq respectively. Despite these apparent similarities, there is a potential lag in satisfaction rating comparing Cymbalta to it's competition. For the first iteration of the investigation, I took a closer look at these reviews to determine if A) This difference in mean review score is significant and B) If the factors contributing to this difference can be found from the data scraped. The distribution of user satisfaction is very non-normal. With a significant portion of the population leaving 1-star reviews. 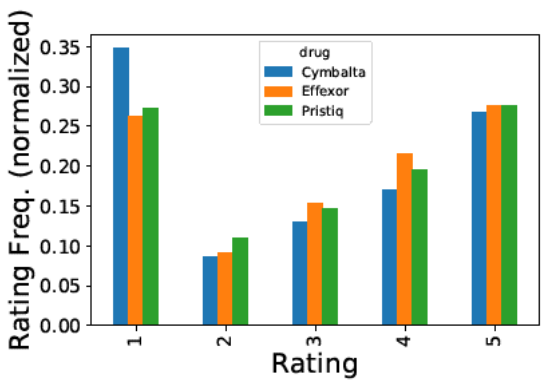 With the distribution as it is, treating the ratings as discrete-ordinal values would be inappropriate for T-testing. Instead, the reviews were binned into two categories. 1 and 2-star ratings were considered 'poor' or 'unsatisfactory' group while reviewers leaving a 4 or 5-star rating for satisfaction were defined as 'good' or 'satisfactory' group. Comparisons of these binary categories reveal a  stark difference between Cymbalta and the other two drugs. 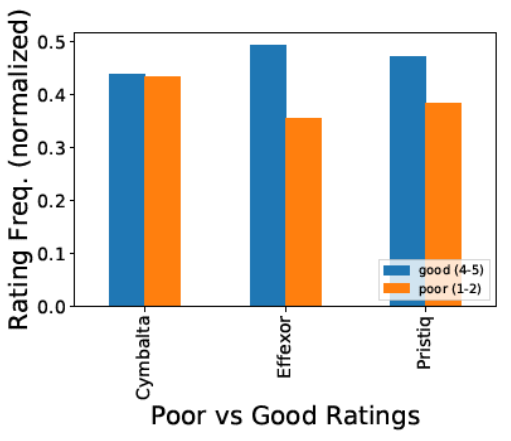 But what could cause such a major uptick in negative reviews for Cymbalta? To answer this I also binned to various the drugs are used to treat into two major categories: Pain or Mood Altering, and comparison of the conditions distribution is made for each drug: 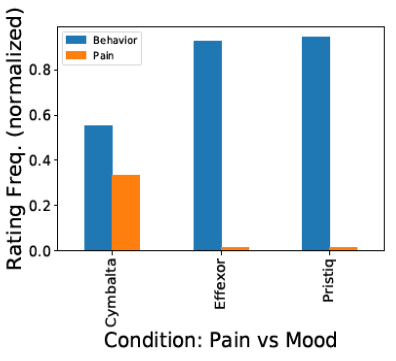 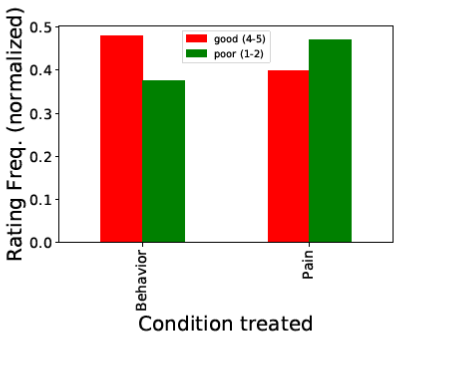 While these differences are statistically significant, further modeling will be necessary to determine the weights each factor has in determining patient satisfaction.

Conclusions and next steps:

With this examination into WebMD reviews of three SNRI class of drugs, we can begin to understand the how public opinion is formed on different drugs, despite similarities in function and target demographics. Cymbalta has significantly more poor reviews for their product because of its secondary application as a pain medication. With this information, medical practitioners may consider prescribing alternatives for chronic pain, and Eli Lilly may pivot marketing and research resources to addressing the concerns patients are having with their product as a pain medication. Future iterations of this work may include creating a logistical regression model to aid in predicting satisfaction and drug effective ratings for a given patient.

Michael is a Data Scientist with a strong background in data exploration and data analysis in physical science fields. 10+ years of experience in all aspects of research, from hypothesis formation to data collection, preparation, analysis, and communication.
View all posts by Michael Chin >