Contributed by Denis Nguyen, Kelly Mejia Breton and Ismael Jaime Cruz. They are currently in the NYC Data Science Academy 12 week full-time Data Science Bootcamp program taking place between April 11th to July 1st, 2016. This post is based on their fourth class project - Machine Learning (due on the 8th week of the program).

The Higgs Boson is a type of unstable subatomic particle that breaks down very quickly.  Scientist studies the decay of the collision and works backward. To assist scientist in differentiating the background noise from the signal, we offer some machine learning algorithms to better predict the Higgs Boson.

Like all data science projects, we began with some exploratory analysis of the variables.

We first used a correlation plot to inspect the different relationships going on between variables. As indicated by the dark blue and dark red points, there seems to be a high correlation among many of the variables. We noticed the PRI_jet variables, for example, have a lot of blue dots in relation to the variables DER_deltaeta_jet_jet, DER_mass_jet_jet, and DER_prodeta_jet_jet. This is likely since according to the documentation for the challenge,  those DER variables are derived quantities computed from the PRI or primitive quantities measured from the particles. 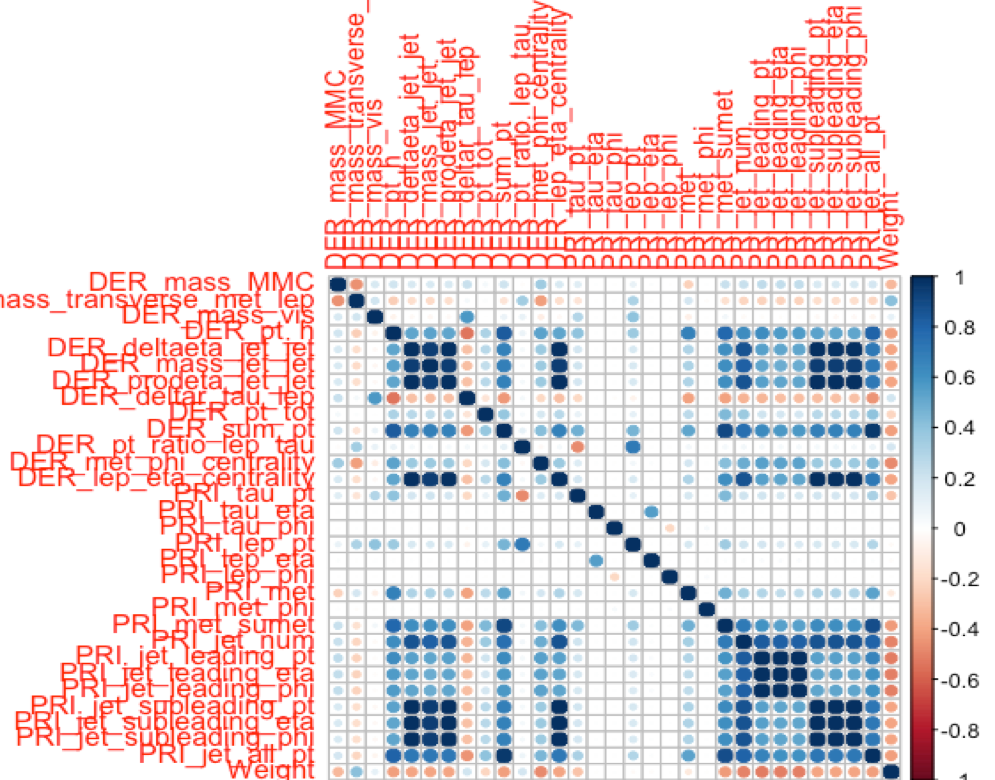 Next, we wanted to zoom in on the correlation plot and see some scatterplots of select variables. 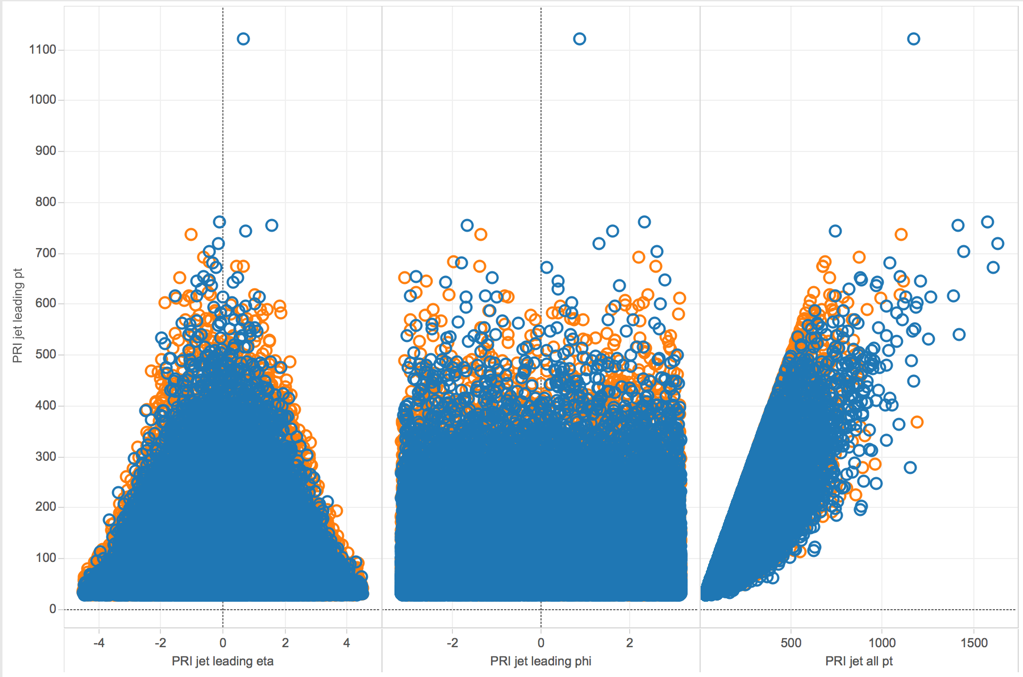 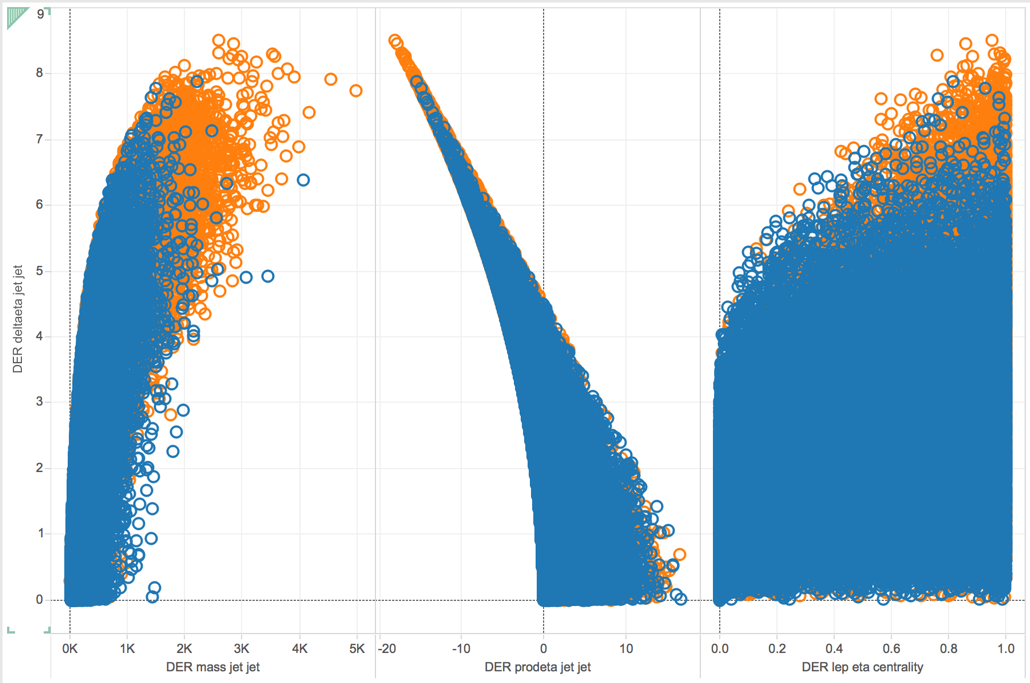 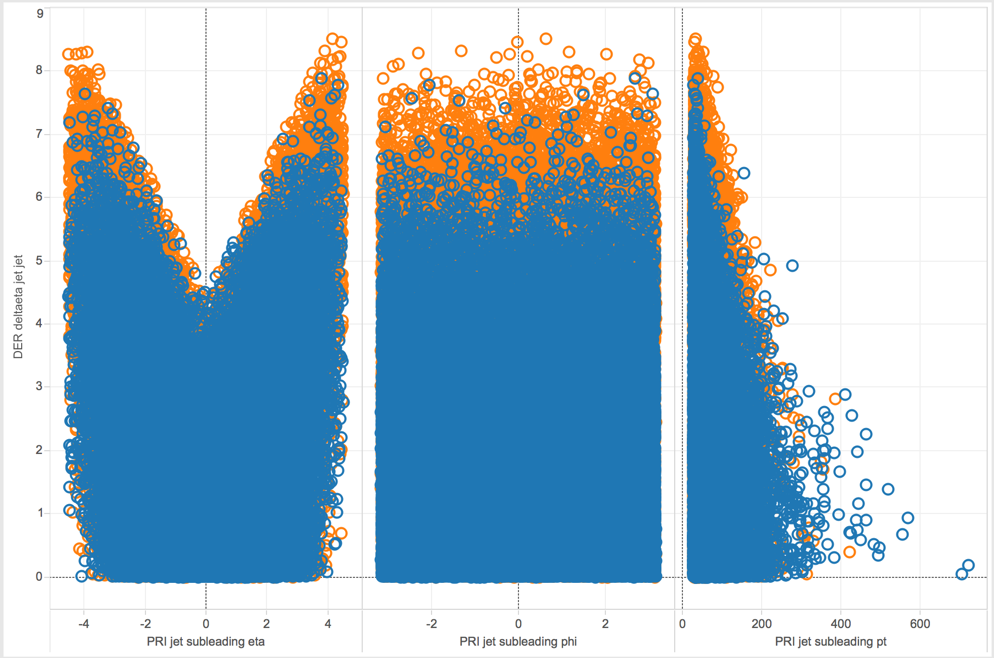 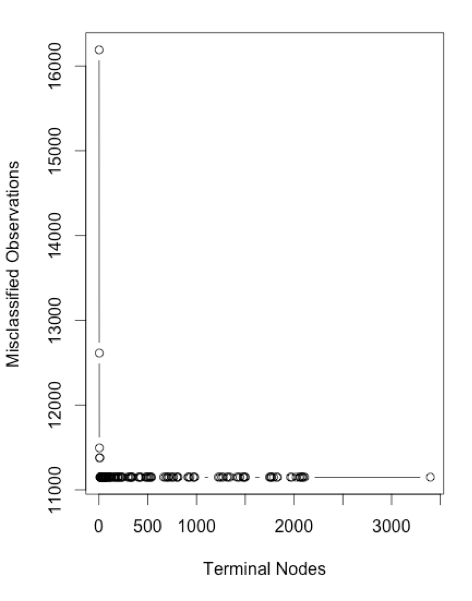 Classification tree models are great for descriptive purposes.  They produce relatively easy regions to trace the process of the model. Although they tend to have a lower prediction accuracy.

Taking a look at the tree we see the Derived Lep Eta Centrality variable at the very top indicating its importance in determining background noise or a signal of the Higgs Boson. If we were to get a new observation the model would work as follows, beginning at the very top, ask is data point is greater or less than 0.0005? If less go left if greater go right.  Moving on to the next terminal node, and so on.  Very easy to interpret, but if you are interested in higher predictability this may not be the best option. 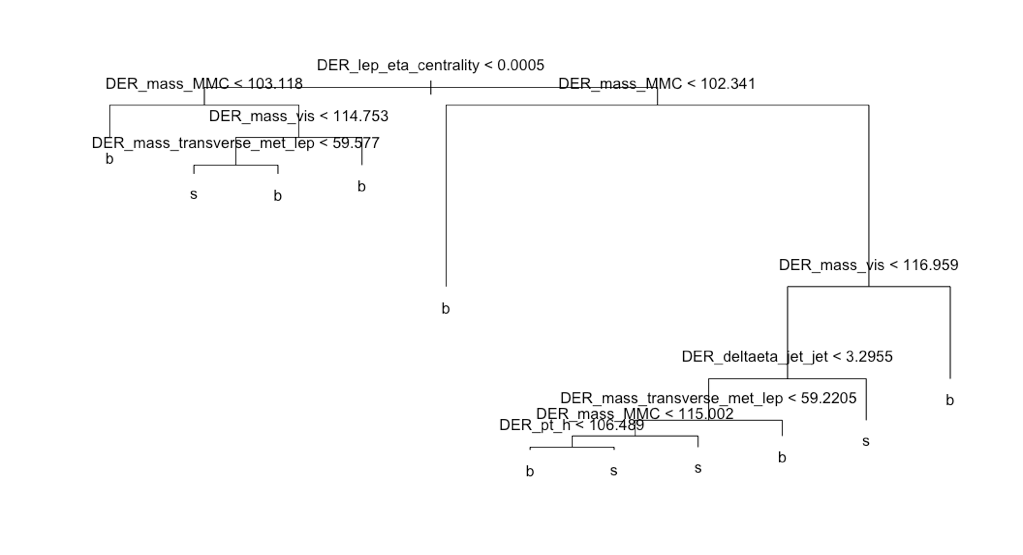 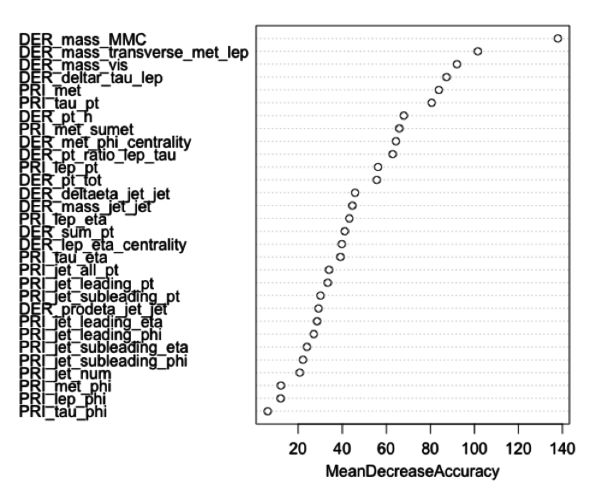 For a more robust model with greater prediction, we attempted a Random Forest.  A Random Forest is the average of a collection of trees, resulting in an ensemble with greater predictions. Although, unlike a single tree, you lose descriptive abilities.  We ran the model with all the variables, on the right-hand side is the variable importance plot returning an AMS score of 1.781. Impressive, just changing the model type the AMS increased by over 0.5 points. 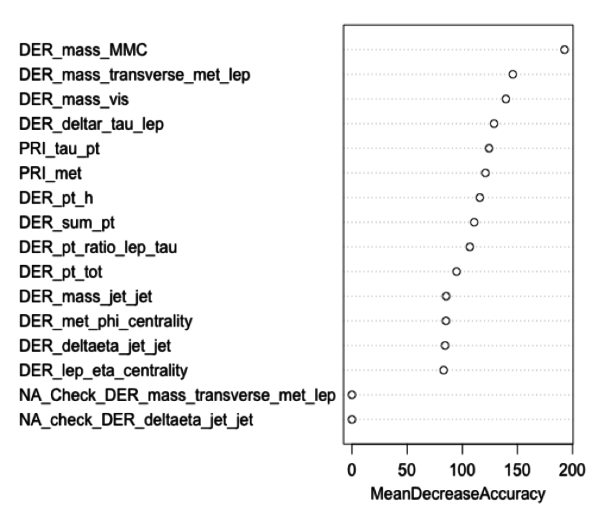 We then decided to try a model with
only the top 14 variables, along with two columns created to focus on the missing values for DER_mass_transverse_met_lep and DER_deltaeta_jet_jet.  We found these columns to individually reduced the errors at most, and together worked great. Resulting in an AMS
score of 2.795 with an accuracy of 83.5% selecting four features at a time at random, creating 500 trees, and taking the ave
rage.  This seems like a great model.

When people think about reducing dimensions, they may think about reducing the amount of information which would result in a less precise model. This is not always the case and it can sometimes improve models. Advantages of reducing dimensions include reducing the time and storage space required, making it easier to visualize data and remove multi-collinearity which would improve the model.

Because there are columns composed of other columns in the dataset, we decided to perform least absolute shrinkage and selection operator (LASSO) to remove possibly related predictors and focus on the ones that would give us a clearer model. After performing LASSO on the variables, we have scaled down many of them down to 0, leaving 12 that we will use. 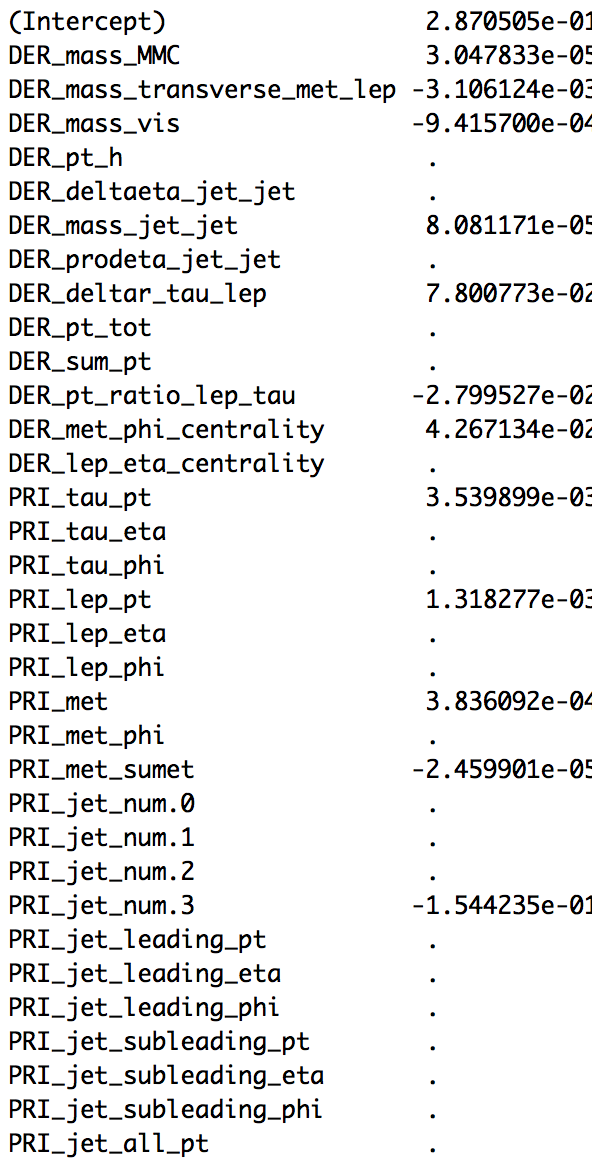 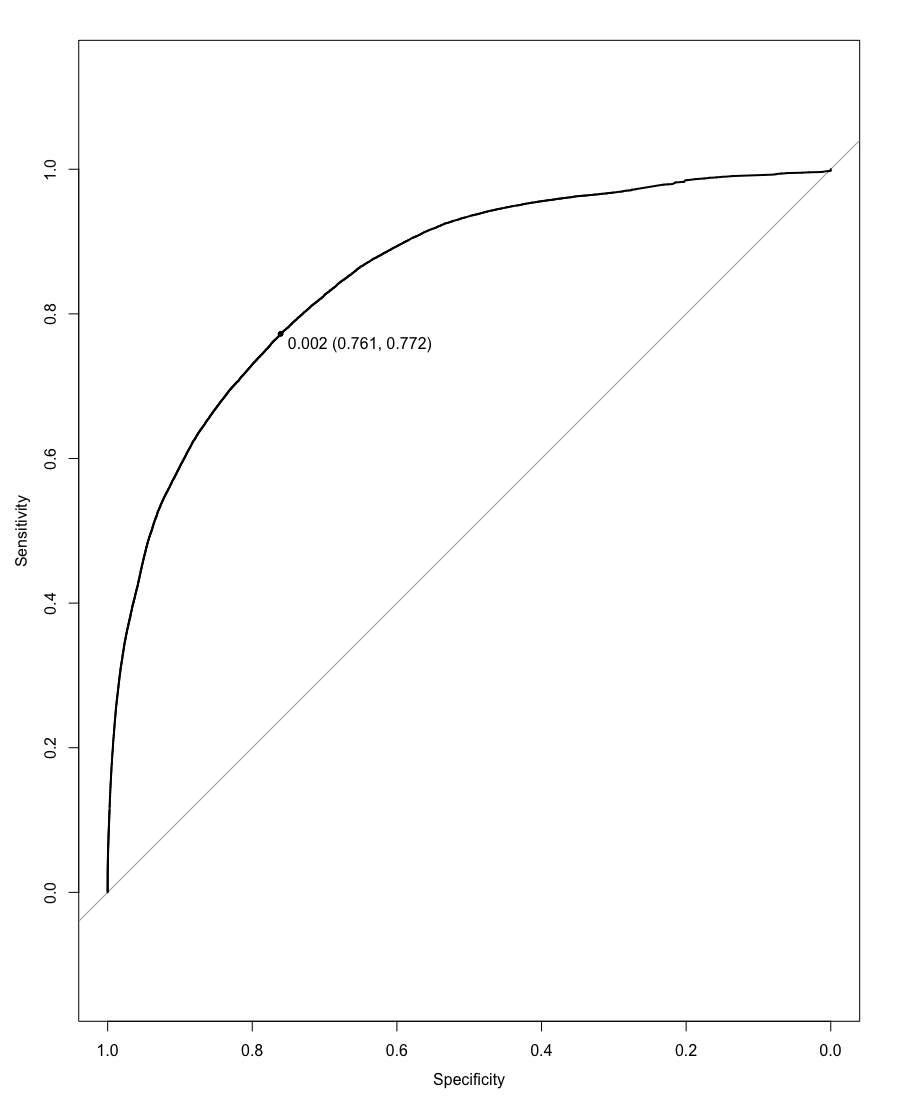 After focusing our model on the 12 variables returned by LASSO, we attained a better score. We got an AUC score of 0.8525 with the same threshold of 0.002. This gave an AMS score of 2.30291, which was higher than the previous model run with all the variables. This shows us that we were able to attain a better predicting model by reducing the number of variables, which probably removed related variables. 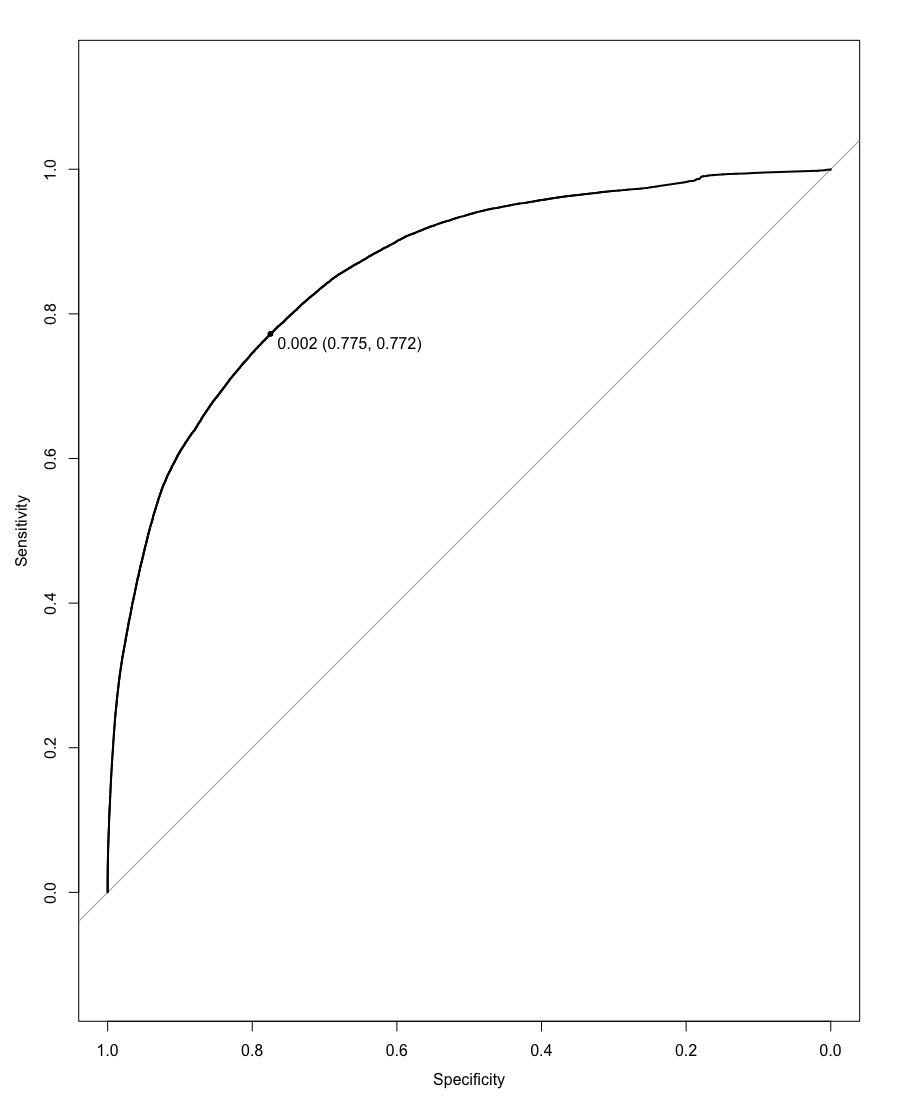 Because the AMS score gained was not much higher, we decided to move onto another machine learning method that may yield better results.

Finally, turning to a more predictive-based model, we attempted using the support vector machine algorithm. Using the scatterplots earlier and seeing as how there was much overlap between signal and background, we chose to use a radial kernel as the problem did not look linearly separable.

The pros and cons of using this algorithm are as follows: 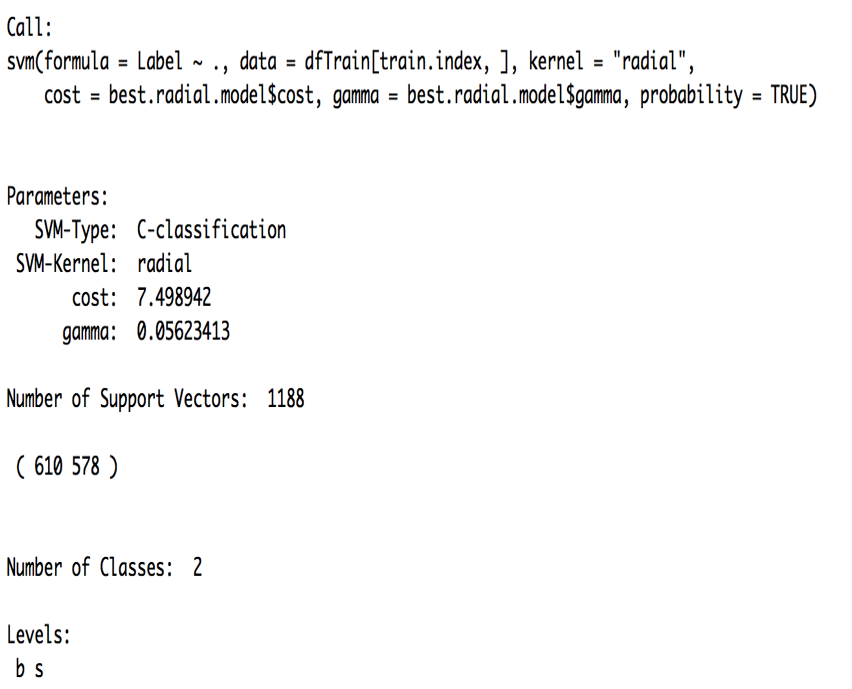 Due to the model being computationally costly with the size of the dataset, we considered tweaking different parameters in order to get it running without consuming too much time. We chose to train it on 1% of the data and used 5-fold cross-validation to find the best estimates for cost and gamma. Next, we used the results from the random forest model and reduced the data set to the 14 most significant variables. Finally, with trial and error, we found the best threshold for the model to be 0.7. Using all these led to an accuracy of 0.8056 and an AMS score of 2.72036.

KB is a driven and determined Senior Analyst with nearly 15 years of proven data analytics expertise. Most recently focused on forecasting short-term and long-term global crude oil and product prices for PIRA Energy Group. Previously held a...
View all posts by Breton >