When looking at global trade data, it is often a challenge to get quick insights about the relationships between trade partners. This is because of the inherent complexity of the data.
Effective visualizations of trade flows can enhance our understanding of a country's economic activity.

The most common way of visualizing flow between countries is drawing lines on a geographic map. This type of visualization is often very effective for small datasets with limited complexity. However, because of the amount of data in global trade and the number of trading partners a country has, the resulting visualization is just a clutter of overlaying arrows with little insight to be drawn. Case in point is the map below. 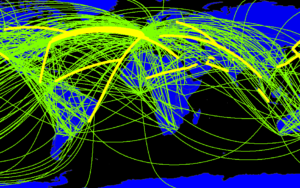 The source of my global trade data, World Integrated Trade Solution presents a number of visualization techniques to relay insight behind the numbers. Tree maps were used to present each country's trade volume with other countries. 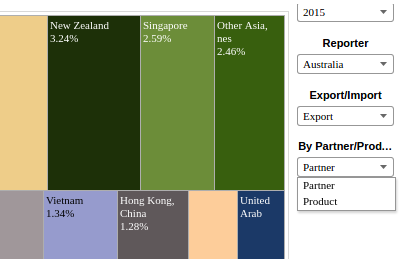 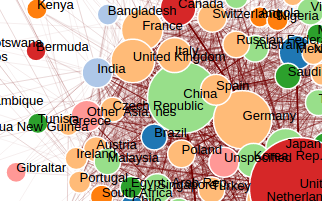 Visualization of global trade data have to depict a large amount of information. The most important of which are the information of origin and destination, and the volume of trade.
A proposed alternative is the use of chord diagrams. This diagram is a circular plot which can arguably present global trade data in an intuitively graspable way.
Aside from being more visually appealing than Figure 1, some key elements of the design help us gain insight with just a quick glance at the diagram.
The trading countries are represented by the circle's sectors. Each country is assigned a unique color which can be randomly chosen or can be picked from a gradient scale to depict economic indicators. For example, darker colors can represent higher GDP. For simplicity, a random color was used in this chord diagram. 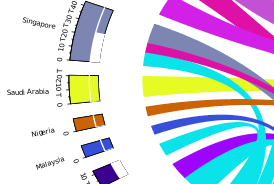 • The flow of trade is encoded by the origin color. In the closeup shown Figure 5, Indonesia is assigned a light blue color, Japan is encoded purple. Hence, the flow from Indonesia to Japan is colored light blue, and the smaller counter flow from Japan to Indonesia is colored purple. The direction of the flow is also indicated by a gap between flow and circle segment at the destination. 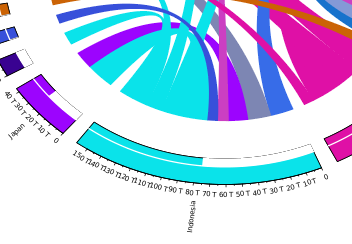 • The volume of trade is indicated by the width of the flow and the radians of each sector. The trade's corresponding dollar value is also indicated by tick marks on the outside of the circle’s segments.
• The net trade movement are identified through the relative differences in the radians. In Figure 5 we see that Japan is a net importer with most of its trade volume incoming rather than out.

The chord diagram was implemented using circlize library in R. The shiny app was designed to be flexible in terms of choosing which countries to investigate. By picking a few countries at a time, the chord complexity is minimized. The data collected and presented were that of 2010 to 2015. The shiny app can be found here.
A quick look at the trading activities of the members of G8 countries consistently show the United States as the top in trade activity. The United States is a net importer with its import volume overshadowing its exports by as much as 55% in 2010.
Among BRIC nations, China overshadowed all its partners in terms of trade activity throughout the period. Aside from being a net exporter with as much as 63% more exports than imports in 2010, the country showed a steady increase of exports from 2010 to 2014.

The visualization is only as good as the data which is available. Upon further investigation of the dataset, it showed that not all countries were able to report their trade activities consistently. The current library used has limitations in terms of interactivity. It would have been better if a user can click on a particular flow and see a breakdown in terms of the product category which makes up the flow. For now, this is augmented by a table next to the chord diagram.