The world has been conflicted for decades on how to deal with the rising threat of terrorism across the globe. From September 11, 2001 to the more recent migrant crisis, terrorism has been a major talking point in every American Election cycle and many others throughout the world. Easily accessible information related to these concerns is becoming more necessary, not just for Intelligence agencies but for the news reporter and everyday voter. This app provides easily accessible and high quality analytical data to anyone who is interested in understanding how terror affects each region of the world within the last decade.

How has terrorist activity changed over the last three decades?

Where are terrorist most active?

The Global Terrorism Database (GTD) is an open-source database maintained by researchers at the National Consortium for the Study of Terrorism and Responses to Terrorism (START). The GTD is supported by the US department of Homeland Security and The US Department of State.[1]

Sources: Unclassified media articles (Note: Please interpret changes over time with caution. Global patterns are driven by diverse trends in particular regions, and data collection is influenced by fluctuations in access to media coverage over both time and place.). See the GTD Codebook for important details on data collection methodology, definitions, and coding schema.[1]

To clarify terms, we use this definition of terrorism:

"The threatened or actual use of illegal force and violence by a non-state actor to attain a political, economic, religious, or social goal through fear, coercion, or intimidation."[1]

The first tab is intended to allow the user to explore every region of the world and get a general sense of terrorist activity in that region across the last decade. 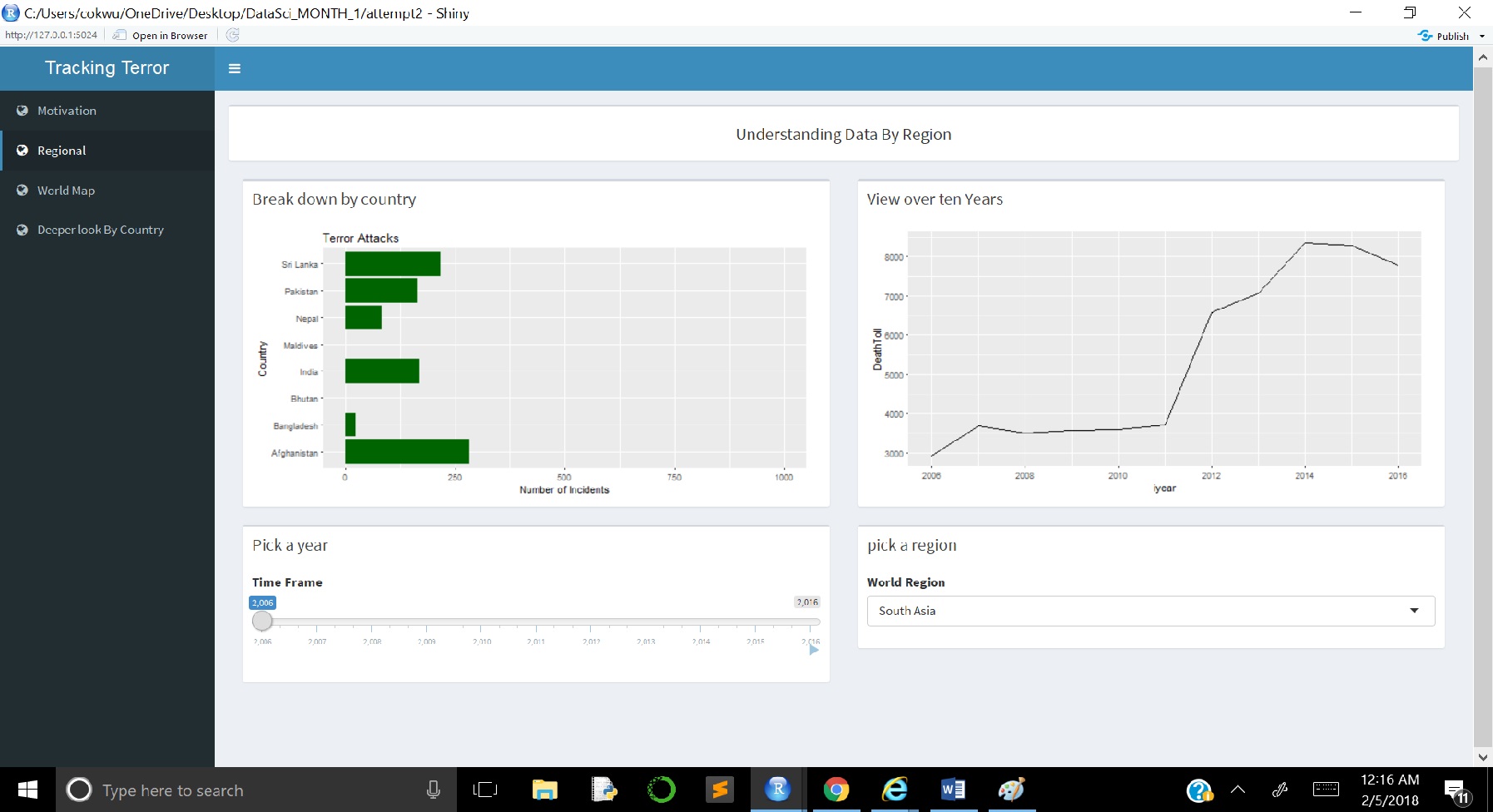 Once the user has identified a region or country that they would like to explore in further detail, they can use the second tab to identify the most active terrorist group  in that region and see where exactly each terrorist incident took place. 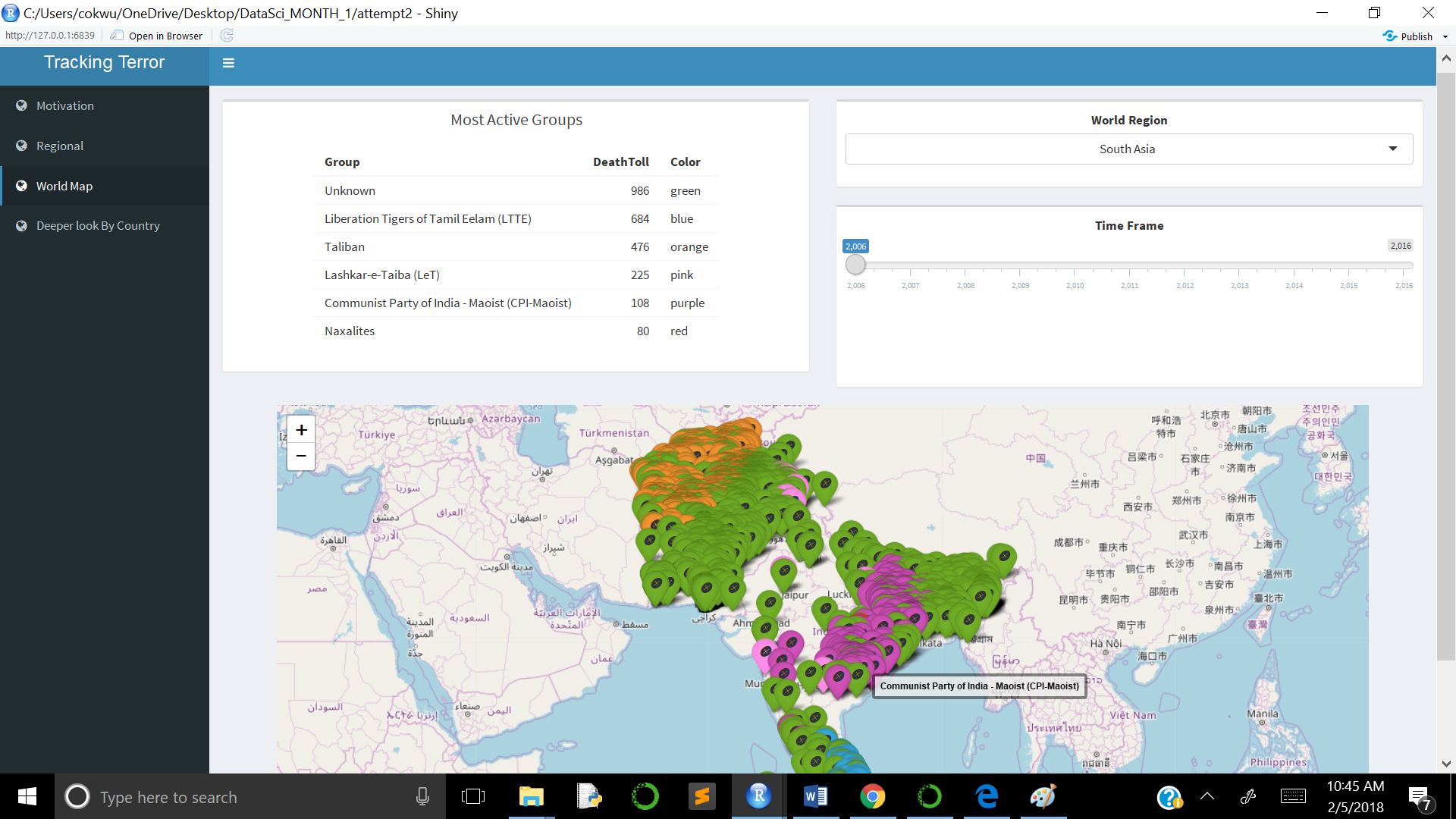 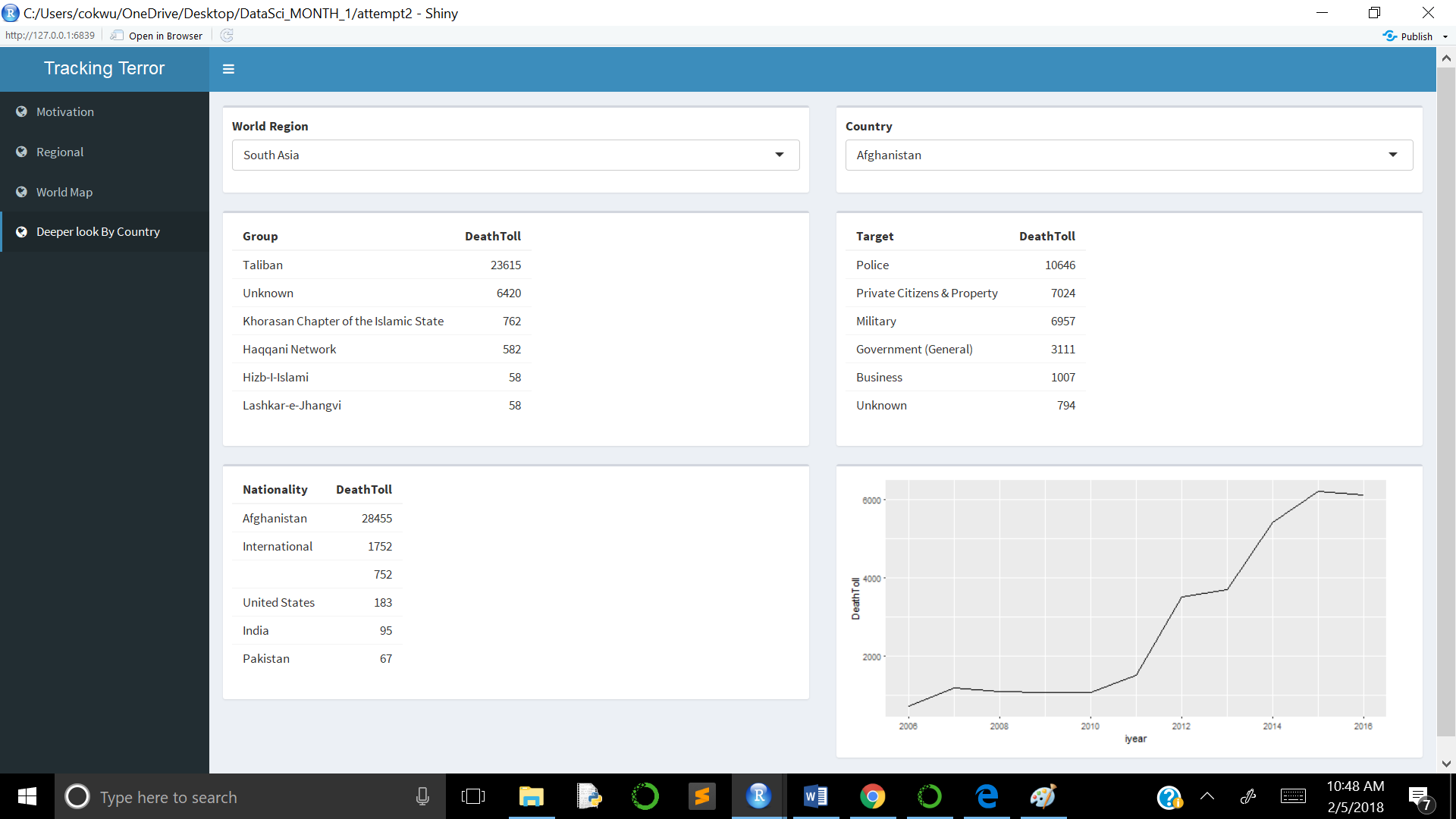 Organizing the data demonstrated one common theme throughout almost every region or country. They all have a large number  of unknown factors. There are some countries were information was nonexistent altogether. This is said to be a result of the record keeping in those countries or cases being unsolved. This app displays all the information that was made available but cannot be taken as a complete data set for that reason.

Although this App was designed to just show available data, there are some insights that maybe presented in future continuations of this project. It could be reasonable to predict missing information based on patterns that we see throughout the data we do have. For example, looking at the second tab, we see that southeast India has suffered many attacks from the Communist Party of India. We also see a lot of incidents in the same region involving unidentified perpetrators. It would be reasonable to predict the likelihood of one of those incidents being related to the Communist party of India by factoring in frequency of this terrorist groups in this time and year as well as looking at proximity to other incidents made by the same group. We can also look at types of weapons and attacks carried out by certain groups to see if patterns and group habits emerge. Then we can use this to suggest a criminal suspect list.

Another interesting future inquiry would be determining predictive factors might lead to more terrorist activity. Correlations to consider include poverty, corruption indexes and other national internal indicators. In particular, it could be interesting to see how a countries corruption index correlates with the quantity of missing information in the data set.