Are We In The Golden Age of Television? Scraping TV Data From Metacritic.

I don't discriminate when it comes to television - I love everything from bad reality shows to prestige dramas.  But over the past few years, I've felt overwhelmed by the sheer number of shows being heralded as "must-see TV". I know I should watch Atlanta and Mr. Robot, but who has the time? I'm not alone here - the Financial Times, in an article entitled "Watch it While it Lasts: Our Golden Age of Television," wrote,  "We used to complain that there was never anything good on TV. Now we complain about the opposite." In addition, new companies like Netflix are spending billions of dollars each year on original content, which may contribute to the feeling that there is constantly something new to watch.

I scraped TV data from Metacritic, a website that aggregates reviews of media products. Most notably, it aggregates both qualitative and quantitative critic reviews into a single "Metascore". It also contains detailed information about each product, though the TV section was not launched until 2005. Metacritic does have data on TV shows from prior years, but their listings are incomplete. I scraped several layers of data, including:

From this process, I obtained 13 variables for over 2,000 shows, including Critic Rating, User Rating, Rating Description, Network, Season and Series Premiere Dates, and Genre(s).

For my analysis, I wanted to investigate my hypotheses about the influx of quality, must-see TV in recent years. I attempted to answer the following questions:

First, I wanted to explore the relationship between Critic and User Ratings. Metacritic provides a Critic Rating for TV shows with at least seven critic reviews, as well as an average User Rating for shows with at least four user reviews. I graphed both and colored the points based on the Rating Description, which is a qualitative variable based on the quantitative Critic Rating. 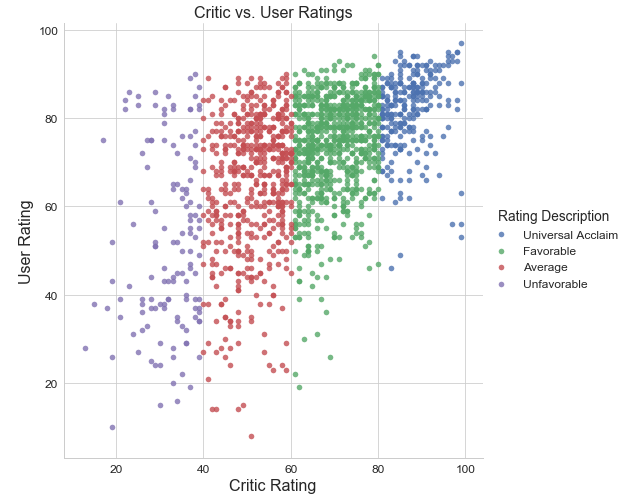 Critics are "harsher" than users - the median rating given by critics is 65, while the median rating submitted by users is 74. The distribution of User Ratings is also narrower and is concentrated towards the higher end of the scale.

Critic and User Ratings may be correlated, but I wanted to know whether they matter for a show's success. By graphing the total number of seasons for each show, I found that almost half of the shows in the data set lasted for only one season. I also checked to see if there was any correlation between Critic and User Ratings and a show's total seasons, but there was a fairly weak linear relationship in both cases. Most shows only last for one or two seasons, regardless of how reviled or beloved they are. 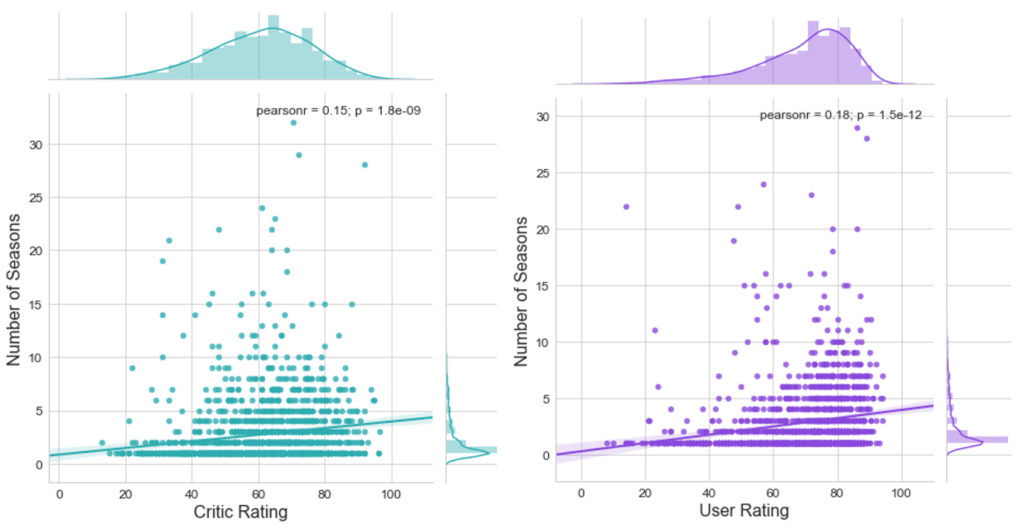 The Era of Peak TV?

Next, I wanted to know whether there really has been an increase in the quantity and quality of TV over the last few years. I graphed the number of shows on TV by year, as well as the number of highly rated shows (Critic Rating > 60). 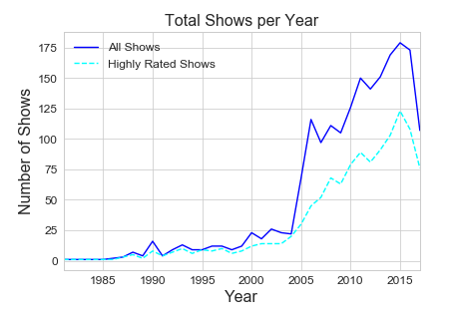 Looking specifically at the years between 2005 (when Metacritic launched its TV section) and 2016 (since 2017 data is incomplete), it is clear that the number of shows, as well as the number of "good" shows, has increased. However, looking at the average Critic and User Rating by year does not show such a clear trend. 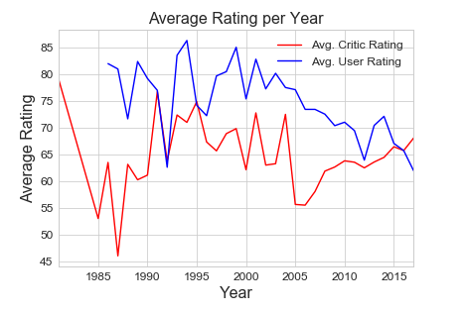 Critic and User Ratings have fluctuated in recent years, even as the total number of highly rated shows has increased. We can conclude that shows are not necessarily getting better - we may just have more shows (and therefore more "good" shows)!

The increase in show volume may be related to the many networks that have entered the TV ring over the last few years (e.g., Netflix, Hulu). We can see this increase by looking at the number of networks with at least one show on the air by year. 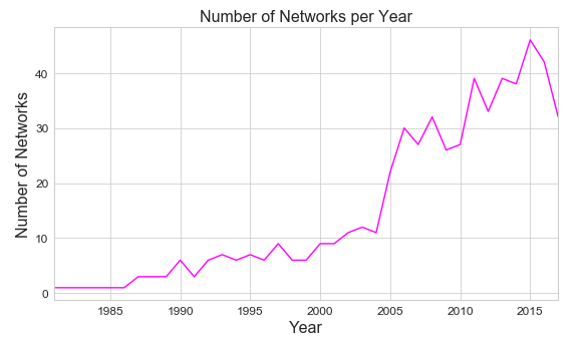 The number of TV networks essentially doubled between 2005 and 2015 - no wonder we feel overwhelmed by our options! Access to many of these networks may require additional cable packages or online subscriptions beyond the basic channels, so how do we decide where to spend our time and money? To explore this, I looked at the top 10 and bottom 10 networks based on average Critic Rating. Of all networks with at least 15 existing shows, PBS and HBO have the most critical acclaim. A&E and NBC have the least.

To incorporate User Ratings and show volume into my analysis, I created a bubble chart. In the image below, the size of the bubbles represents the number of shows each network has produced. Only networks with at least 15 existing shows are included. 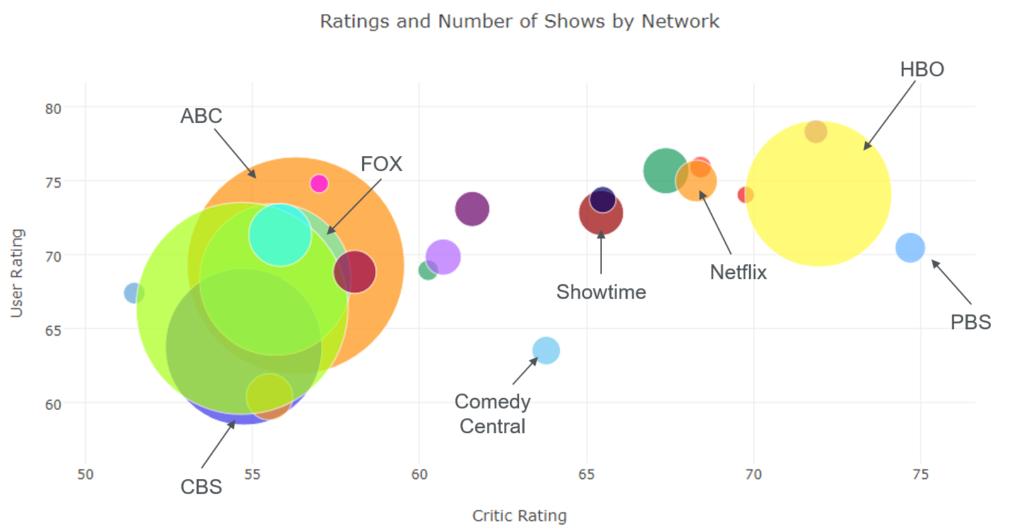 This chart shows that HBO is essentially the "model" network - it has produced a large number of shows that are beloved by both users and critics. Other subscription networks, such as Netflix and Showtime, also stack up well against the competition. On the other hand, traditional basic cable networks are lagging behind in terms of creating "prestige" TV. This reflects the growing industry trend of cable package cancellation in favor of streaming services and other online subscriptions.

What Should I Watch?

Finally, I used the data I collected to cut through all of the "buzz" and determine what I should actually watch next. I averaged Critic and User Ratings across all shows with at least three seasons, and selected the top 10 Dramas and Comedies. Hopefully this will help any of you out there looking for a new show to binge watch! 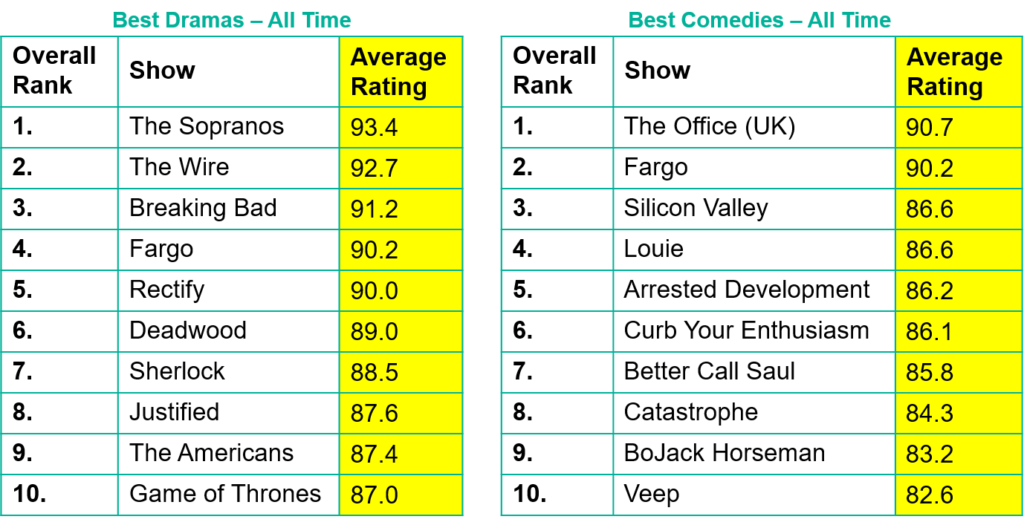 Based on the data from Metacritic, it is difficult to say whether we are really experiencing a "golden age of television". There are more shows being produced than ever before (and therefore more good shows), though the average quality of shows may not be improving. The influx of new networks has likely contributed to this increase, though many of the new "prestige" shows seem to be coming from platforms like HBO and Netflix, not traditional cable. Unless cable networks start producing "must-see TV" to improve demand, they will probably continue to see a drop in subscription rates among their customers.

Link to my Github.