Goodreads: An Analysis of Data Trends in Reader Behavior

Using a dataset scraped by Austin Reese, which was itself based on a list of 50,000 books on Goodreads, I set out to better understand today's publishing and reading trends. Although this analysis is in no way comprehensive, it does provide an insightful visual exploration into today's readers. Using rating counts as a proxy for popularity and sales, we will be exploring which features maximize both rating count and average rating.

This exploration will be framed around the following 6 questions:

Initial Data On Rating and Books

First, let's take a general glance at the data. 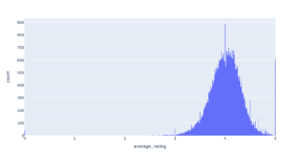 It appears to be normally distributed, but with suspicious spikes around the 3.5, 4, 4.5, and 5 marks. These spikes appear to be from books that weren't popular enough to get enough ratings to throw them into the 'gray area' between user-provided ratings. Let's see what happens if we remove all books with fewer than 1,000 ratings. 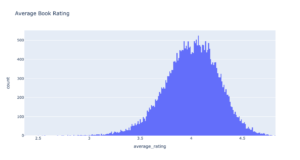 That's more like it. In addition to appearing much more evenly distributed, there was a substantial drop in the standard deviation (0.345 -> 0.266).  Now, let's take an overview of correlations via the heatmap. 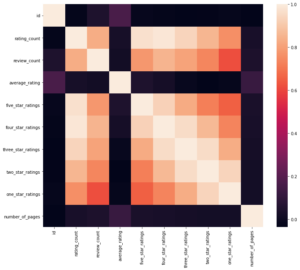 The heatmap suggests that there may be a connection between the average rating and the number of pages the book has. It does not suggest, however, that longer book will be more popular. Let's dig a little deeper to confirm this.

Data on Page Number and Book Rating and Popularity 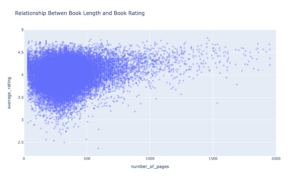 The vast majority of books seem to be centered around the 300-500 page zone. This visualization also suggests that as books get longer, the ratings generally improve. But what about popularity? 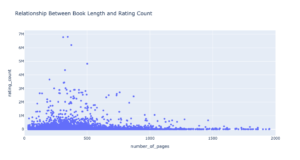 As expected, the longer books, though higher rated, are rarely popular. The majority of popular books seem to be in the 200-800 page range.

My initial guess was that books in a series would be more popular and lower rated than their non-series counterparts. This guess turned out to be very, very wrong. 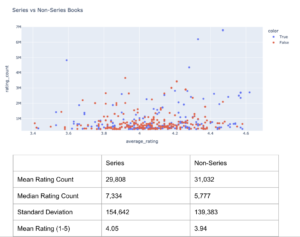 Books that are part of a series appear to be roughly equally popular and higher rated than there non-series counterparts. This was a surprising finding.

What impact do awards have? 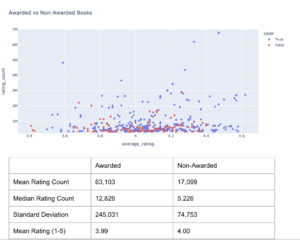 It seems to be that awarded books tend to be far more popular while, surprisingly, being equally rated to their non-awarded counterparts.

What genres seem to be trending?

Provided below is an admittedly crude assessment of changes in the number of book publications by genre over the past 70 years. 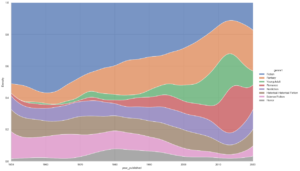 Though a much more granular assessment of genre trends is needed, this graph still reveals a few interesting trends; Fantasy shows an incredibly steady growth in popularity while Young Adult and Romance books have enjoyed a large growth in popularity over the past 20 years. It is also worth noting that the majority of the 'mega popular' books are in the Young Adult (Harry Potter, Hunger Games, Twilight, Divergent, etc.) and Romance (Fifty Shades of Gray) genres.

What keywords are most common in book descriptions?

This wordcloud provides an entertaining look into book descriptions over the past 50 years.

It's hard to glean anything definitive from it, but at a quick glance, it seems to be that relational words (family, mother, father, friends) and 'absolute' words (never, first, everything) are very common among book descriptions.

What trends can be found in publications by the sex of the author?

If we first look at the percent difference in publications by male vs female authors over the past 70 years, a striking trend is revealed. 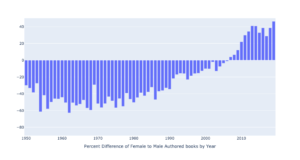 From the 1950s through 2000, the majority of books published by year were primarily from male authors. Starting around 1990, this begins to shift until, in 2005, male and female authors are equally represented among publications. Now, it seems, most of the book publications are consistently from female authors for the first time in history - or, at least, in this dataset 🙂

If we again look at the percent difference in publications of male and female authors, except only including the books that have received an award, another interesting trend reveals itself. 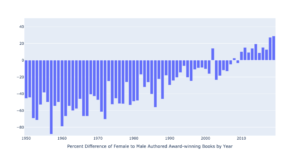 What were our limitations?

Before I summarize the major findings of this analysis, I want to quickly note the following limitations of this study:

In the future, this assessment will provide, in addition to fixes to the aforementioned limitations, an analysis of the relationship between book price and book length, something this dataset did not allow.

With book publishing being such a vast, though recently challenged, industry, it is more important than ever to know what readers want. Using this and future analyses of information provided by Goodreads' vast userbase, book publishers can make wiser decisions regarding who, what, and when to publish. Now... Go read a book.

View all posts by Trevor Ban >