Contributed by Sharan Naribole. He is currently undertaking the part-time online bootcamp organized by NYC Data Science Academy (Dec 2016- April 2017). This blog is based on his bootcamp project - R Exploratory Data Analysis.

The H-1B is an employment-based, non-immigrant visa category for temporary foreign workers in the United States. Every year, the US immigration department receives over 200,000 petitions and selects 85,000 applications through a random process. The application data is available for public access to perform in-depth longitudinal research and analysis. This data provides key insights into the prevailing wages for job titles being sponsored by US employers under H1-B visa category. In particular, I utilize the 2011-2016 H-1B petition disclosure data to analyze the employers with the most applications, data science related job positions and relationship between salaries offered and cost of living index.

The H-1B is an employment-based, non-immigrant visa category for temporary foreign workers in the United States. For a foreign national to apply for H1-B visa, an US employer must offer a job and petition for H-1B visa with the US immigration department. This is the most common visa status applied for and held by international students once they complete college/ higher education (Masters, PhD) and work in a full-time position.

The Office of Foreign Labor Certification (OFLC) generates program data that is useful information about the immigration programs including the H1-B visa. The disclosure data updated annually is available at https://www.foreignlaborcert.doleta.gov/performancedata.cfm

1) EMPLOYER_NAME: Name of employer submitting the H1-B application. Used in comparing salaries and number of applications of various employers.

2) JOB_TITLE: Title of the job using which we can filter specific job positions for e.g., Data Scientist, Data Engineer etc.

3)PREVAILING_WAGE: The prevailing wage for a job position is defined as the average wage paid to similarly employed workers in the requested occupation in the area of intended employment. The prevailing wage is based on the employer’s minimum requirements for the position. (Source). This column will be one of the  key metrics of the data analysis.

4) WORKSITE_CITY, WORKSITE_STATE: The foreign worker’s intended area of employment. We will explore the relationship between prevailing wage for Data Scientist position across different locations.

5) CASE_STATUS: Status associated with the last significant event or decision. Valid values include “Certified,” “Certified-Withdrawn,” Denied,” and “Withdrawn”. This feature will help us analyze what share of the H-1B visa is taken by different employers/ job positions.

Other important columns include Unit of Pay and whether the Job position is a Full Time position or a Part-Time position.

The main data transformations I performed are as follows: 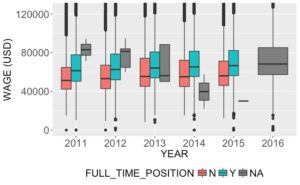 I observe many of the Worksite values had spelling errors. For example, New York was misspelled New Yrok 16 times, San Francisco misspelled San Fransisco 82 times and Sunnyvale misspelled Suunyvale 11 times. These are just a few examples. In order to correct the spellings in a systematic approach, I implemented a Spell Corrector that uses a probabilistic model described here.

To describe briefly, this spell corrector finds out every possible transformation to a given word by 1-edit distance including deleting a letter, interchanging of two adjacent letters, inserting a new letter, replacing a letter with another letter from the English dictionary. This is performed for a single position in a word for a possible candidate correct solution. Once these transformations are obtained, the transformation with the highest occurrence in the list of work sites in our dataset is selected as the correct spelling. The code for this spelling corrector can be found on my GitHub. This code uses hashmap package that maps every worksite with the frequency of occurrence in the dataset.

As Houston is present  in Texas, California and few other states, it would be erroneous to consider only the Work site city for this spelling correction. Therefore, I include both worksite city and worksite state to find the frequencies of occurrence before performing the spelling correction.

I find out the latitude and longitudes of the work sites. This information will help in creating map plots for the metrics considered in the data analysis.

ggmap package provides a convenient way of finding out the geocode given a location in string format. However, there is a 2500 request limit per day. Therefore, I find out the geocode only for the top 2500 worksites based on number of H-1B applications observed in our dataset. 96.47% of the records in our dataset are covered by the top 2500 work sites so it was sufficient information for the data analysis.

Lastly, I used Scrapy package in Python to collect Cost of Living plus Rent index for top cities in the US. I expect the Wages offered for the same job position might vary significantly based on the cost of living. This will be another component of my data analysis.

The data was scraped from here comprising of 119 cities. The GitHub code for the Scrapy spider can be found here.

With this, I complete the data transformations and next begin the data analysis.

I begin the data analysis by focusing on the employers with highest number of applications in the dataset and analyze the salaries offered by them with other popular employers. Next, I focus on the applications related to Data Science job positions. Last, I explore the distribution of Data Science related jobs across the US and the relationship with cost of living. Let's begin!

The questions I will be answering through data include:

1) Which Employers submit the most number of H-1B visa applications?

2) What is the Percentage share out of the 85,000 visa cap for the Employers with most applications?

3) What are the most common Job Titles applied for by the high applicant employers?

4) How do the salaries compare for Software jobs between high applicant employers and other popular employers? 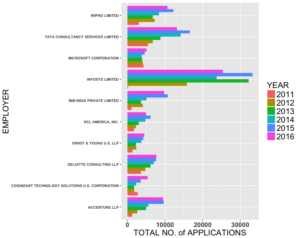 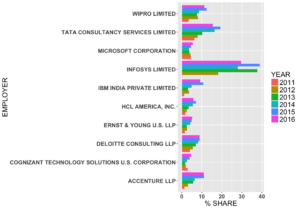 Figure 3. Percentage share for the employers out of the H-1B visa cap

In Figure 3, I assume each certified H-1B application corresponds to a unique H-1B visa. Accordingly, if an employer's 8500 H-1B visa applications were certified then it's percentage share in the 85,000 visa cap is 10%. I use the CASE_STATUS column in the records to find out if a H-1B Visa petition has been certified or not.

1. Over 90% of the certified H-1B visa applications belong to the employers

2. Infosys takes the biggest share more than double than most of the remaining top 10 high-applicant employers. 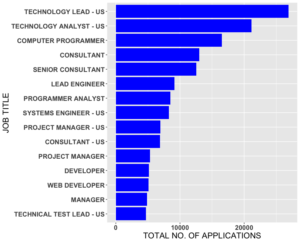 Figure 4. Most common Job Positions applied for by high-applicant employers 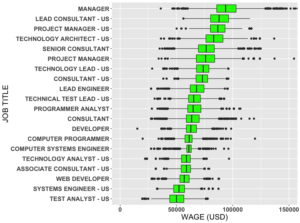 Figure 5. Wages for most common Job Positions applied for by high-applicant employers

3. Test Analyst and Systems Engineer have the lowest wages with the median slightly above 50000 USD.

Based on this data, it will be interesting to find out how the wages offered to Software related job titles by the high-applicant employers compares with the top Software companies like Google, Amazon, Facebook etc. For this purpose, I filter job titles with terms including Programmer, Computer, Software, Systems and Developer from the dataset and consider these positions to be software jobs. Next, I compare the wages offered by 5 high-applicant companies including IBM, Infosys, Wipro, Tata Consultancy Services, Deloitte with Google, Amazon, Microsoft and Facebook. 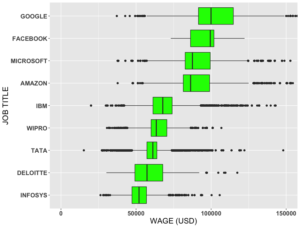 1. Clearly, the high-applicant employers with the most H-1B visas have significantly lower wages for Software job positions.

Next, I focus on the Data Science related job positions. 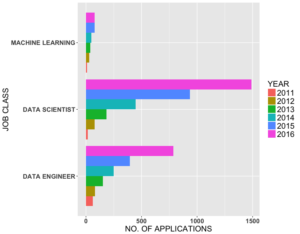 1. Data Scientist and Data Engineer positions have observed an exponential growth in the last 6 years.

2. Job Titles with Machine Learning explicitly in them are still few in number (< 75 in any year). 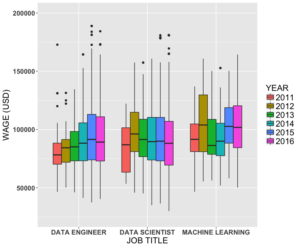 3. Median wage for Data Scientist positions is negligibly decreasing since 2012 although this is the position that has seen the most growth in the last 6 years. 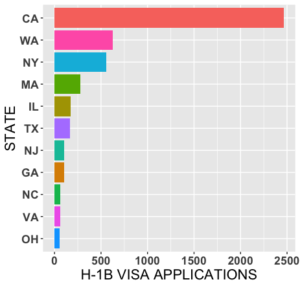 In Figure 9, I filtered states with 50 Data Science related jobs in the last 6 years. Hence, the figure doesn't display all the US states. By Data Science job, I assume the Job title has Data Scientist or Data Engineer or Machine Learning in it.

1. California leads the pack by a huge margin with over 2000 applications.

This result is expected as these states are hub of technology innovation with California housing the Silicon Valley, NY housing the Finance and media corporations, Washington housing the technology giants including Microsoft and Amazon.

3. Surprisingly, only 11 states passed the barrier of 50 H-1B applications related to Data Science in the last 6 years. 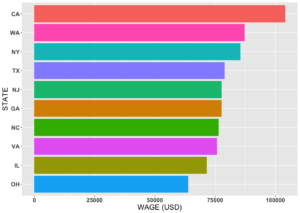 1. California has not only got the most number of jobs but also the highest wages. This might be due to the higher cost of living as I will analyze later.

2. Significant variation in the mean wage across the states.

Next, I dive deeper into analyzing data science positions.at the granularity of Worksite city. 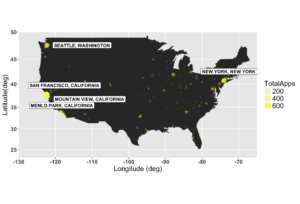 1. San Francisco leads the chart with the most number of jobs.

2. Inside California, the jobs are not uniformly distributed. Instead, are mainly clustered nearby San Francisco.

Last, I explore the relationship between cost of living and the wage offered for Data Science jobs. 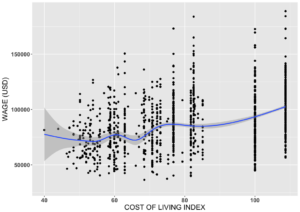 1. A general increase in the Wage is observed with the cost of living although there are slight dips across the curve.

2. The standard deviation decreases as we move towards locations with higher cost of living index.

To conclude, in this project, I performed exploratory data analysis on the H-1B visa petition disclosure data for the period 2011-2016. I found that the employers with the most number of H-1B visa applications pay significantly lower wages compared to other employers for similar job positions offered by other employers. Also, I found that the Data Scientist position has experiences an exponential growth in terms of H-1B visa applications. Interestingly, the Data Scientist jobs are clustered in a few hostpots with San Francisco region having the highest number.

I expanded this project to build a Shiny app which can be accessed at https://sharan-naribole.shinyapps.io/h_1b/. I will discuss the functionality of this Shiny app in more detail in my next blog post.

The GitHub code for this project can be found here. Thanks for reading!