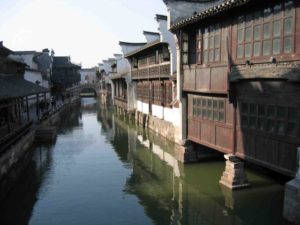 Having worked in film production for at least a decade, I would always talk to my fellow co-workers and movie-lovers on set. It wasn't just a job for us, it was an interest, a passion. It made the long working days pass quicker and although we didn't make much, we were doing what we loved.  One common topic and recent trend that we've been noticing in the past years is the increased globalization that can be seen in today's films. Almost every blockbuster nowadays spans multiple countries and contintents with a diverse cast of beautiful talents from almost every race. While this is great and inclusive thinking, we did notice, however, that certain countries obtain more favor and bias. For my Shiny project, I wanted to focus on this. I wanted to dig deeper into Hollywood's appeal to one of the fastest rising markets today, China.

The Shiny app can be found HERE while the Github repository for all my work can be found HERE. I used BoxOfficeMojo data sets for alltime-grosses and openings for Hollywood films; overseas, in China, and domestically. I figured a uniform data source would prevent any bias and skewness in the analysis.

I gathered the data, cleaned it into various datasets, and from there, organized it for easy viewing. My initial step was to compare the total gross from China versus overall overseas gross per year, just to see the percentages. 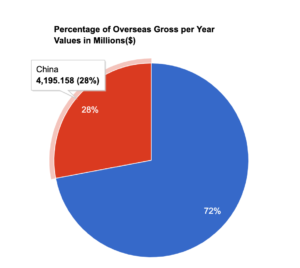 What I noticed for the overall 2018 returns is that from the overseas gross, 28% (over 4 billion dollars) came from China. I feel this is pretty significant considering it's just one country versus the rest of the world(outside of the US of course). It helps that the number of screens in China increased from a little over 4 thousand in 2005 to a whopping 50,000 in 2017. This trend can be seen in the app over a span of a few years. It's also interesting to note that the percentage is getting bigger and bigger as we reach the present.

For further study, I also compared opening weekend numbers of the biggest movies by studio. I got the top openings per studio so I could use the information to compare certain genres, titles, franchises, and such. So that I could get a better idea of what types of films open big in China.

As it turns out, China had low openings for the 'Star Wars' and 'Harry Potter' films. You'd expect these numbers to be way up there since if any film franchise could rake in the big bucks, these two would be it. I thought we already established big numbers and box office returns from China. Where were the numbers coming from, then? It all began to make sense once I compared the opening weekends for Universal Studios.

China had bigger opening weekends for 'The Fate of the Furious', 'Furious 7', and 'Fast & Furious Presents: Hobbs & Shaw'. My insight is that they were less likely to follow storied and on-going narratives. Why would they follow films based on western novels when they could easily  watch self-contained action flicks that need no introduction or backstory. You can easily get more bang for your buck ,and with less investment, watching popcorn films, it seems. This trend can also be seen with bigger opening numbers for the last two 'Mission Impossible' films. Since 'The Mummy(2017)' also opened bigger in China than in the US, I then figured, that maybe big celebrity names like Tom Cruise also factor in their decision to catch a show. That certain stamp of approval from mega blockbuster actors seem to really seal the deal when choosing what film to go see.

I noticed a sharp rise between the years 2012 and 2015. The US Box office returns jumped from 6 to 7 billion dollars while the China Box office returns jumped from 320 million to 2.9 billion dollars. That's a much steeper rise in a same amount of time. This only leads to the inevitable conclusion that the Chinese consumption of Hollywood films is growing at an alarming rate.

Finally, I also created a table and a search function to find specific film particulars. Within the Shiny app, you could input a film (considering it's part of the database) and see particulars such as Total worldwide gross, domestic, overseas, and China returns. Here is an example with Stephen Spielberg's recent adaptation of Ernest Cline's hit 2011 novel, 'Ready Player One'.

The total worldwide gross of 'Ready Player One' was 582 million dollars. From that number, there is 76% of which were overseas numbers. And from that, nearly half of which comes from China alone. Once again this is a self-contained action adventure film that one can just see without any prior knowledge. This is a film that grossed nearly twice as much in China as US numbers. Once again, this just further proved my initial idea that there seems to be a trend with China's increasing box office numbers. 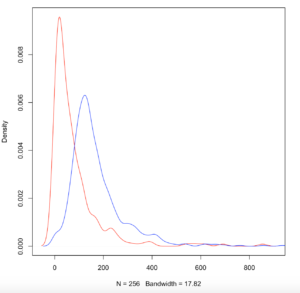 Yes, in general (and as seen from the blue in the density plot here), US returns have a higher average. The numbers don't lie though. As seen from my research and Shiny features, China is one of the fastest growing markets today and we can't deny that. In order to take advantage of that, Hollywood films have slowly become more inclusive of other nations and cultures. Moving from traditional western narratives in favor of sweeping epics spanning across the globe. Filled with a colorful cast of various races and such. A much different direction from what old Hollywood has been doing and if that's where we're going, then this is a trend we should all be in favor of.