Initial Coin Offerings, commonly referred to as “ICOs”, have gained popularity over the last year.  ICOs are a new method for blockchain startups to raise capital where investors send the company currency, normally Ether or Bitcoin, in exchange for tokens.  Now companies looking to raise capital have the option to execute a token sale or get funding from a venture capital firm (or both).   Every company designs a specific function for their token and these functions can vary drastically across companies.  Investors are hoping that tokens purchased in the token sale will increase in value as the company matures.

It is important to note that investors are giving money to companies that have little more than a whitepaper and that, in some cases, these companies are raising massive amounts of money. For example, back in 2014, the Ethereum project raised $2.3M through a token sale. In July 2017, Tezos, a potential rival to Ethereum, raised $232M through a token sale.  Given the ease at which money is being raised, some token sales are being orchestrated by  “get-rich-quick” types who have committed fraudulent behavior.  This activity has caused regulatory authorities to respond in different ways.

Regulators around the world have had a range of responses to the ICO craze.  Both China and South Korea banned ICOs.  In the United States, however, it does not appear that the government intends to do that.  While they do intend to increase regulation, it does not appear they will ban them.  After all, as of Decemeber 2017, no initial coin offerings had been registered with the SEC.  In December, SEC Chairman Jay Clayton is on the record saying,  “I believe every ICO I’ve seen is a security… You can call it a coin but if it functions as a security, it is a security…”.  At a Senate hearing earlier this February, CFTC Chairman J. Christopher Giancarlo acknowledged that “distributed ledger technology has extraordinary potential.”  They see a  need to regulate the space due to the characteristics of the offerings and the fraudulent activities that have occurred, however, it appears that they do not intend to stifle innovation more than necessary. Recently, White House cybersecurity coordinator, Robert Joyce, said that the government is still trying to understand the technology, “so I don’t think [regulation is] close.”  Regulation is coming but probably not soon.

I gathered data on over 200 ICOs that occurred over the last 6 months and calculated the return you should expect to receive from that investment.  Several assumptions were made: First, you invested in every token sale that occurred in that month. Second, you invested an equal amount into each project during that month.  Third, you bought during the ICO and held the investment. After analyzing the data, it became clear that certain outliers impacted the expected value of a trade made during a particular month. 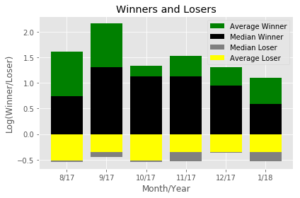 If we look at winning trades for each month, there exist outliers at the top of the range that increase our average winner.  This does not exist when looking at our losers on a monthly timeframe.   It is also interesting that the magnitude of our winners is larger than the magnitude of our losers in every month.  It is clear from this chart that our winning trades are larger in magnitude than our losing trades.  Below is the expected return for each trade made during each month. 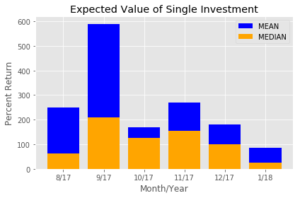 For each month, the expected value is positive.  The returns that have been achieved by simply buying ICOs and holding them are astronomical. In January 2018, Bitcoin peaked at nearly $18,000/BTC before falling to almost $10,000/BTC.  Over this same time period, the expected value of an investment in a January ICO increased 86% on average (or 26% if we are being conservative and using the median). In either case, ICO investing not only outperformed buying Bitcoin outright but you nearly doubled your investment.

The data shows why speculators have flooded the ICO market. The volatility and skewed risk-reward have provided a unique opportunity for speculators.  If you had blindly invested your money in ICOs over the last 6 months you would have done extremely well for yourself. My guess is that the ICO market slowed down in January because digital assets had their worst month since 2014, and it might not be indicative of the ICO market cooling off.  It will be interesting to see what happens to this niche market after it is regulated and as digital assets continue to mature.