Contributed by Jake Lehrhoff. Jake took NYC Data Science Academy 12 week full time Data Science Bootcamp program between Sept 23 to Dec 18, 2015. The post was based on his first class project (due the 2nd week of the program).

Our world is filled with that which we choose to not see, from the rat population in New York to iTunes user agreements, all for the benefit of streamlining our own existence. A far less insubstantial marginalized aspect of society is the homeless, a population comprised of the young and old, parents and children, veterans, the mentally ill, and the unlucky.

Startlingly, estimates of mental illness in the homeless population are as high as 33%, the vast majority of which are untreated.

This AHAR and NAMH data were pulled from pdf files and converted to csv using Tabula. While this simplified extraction, the resulting data frames required much cleaning. Extra spaces, commas, and symbols had to be removed before tables could be manipulated or joined.

To simplify this process, I created a function that removes symbols from text. The function takes the character to be removed as a argument, so it can be applied to data with any unwanted character.

Additionally, using dplyr, columns were renamed, others were created, and only those relevant to the project were retained. One final piece of code removes unnecessary spaces at the end of state names. This is necessary as other tables will be joined on state names in the future, making uniformity a necessity. As we had yet to cover regular expressions in the class, more sophisticated tools for cleaning text were not applied.

The weather data was also, unsurprisingly, messy. After cleaning, a new variable was created, Wtemp, cutting the data into three parts, "cold," "moderate," and "hot" winter temperatures. Finally, the data could be merged with map data for the upcoming visualizations.

There is a lot to be discovered in homelessness data, from an understanding of where the largest populations are located to possible interactions between changing mental health budgets and changing homelessness rates. 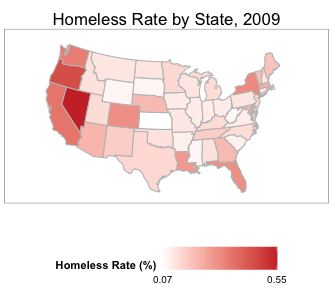 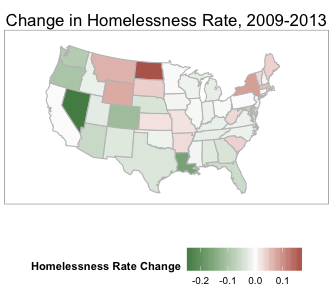 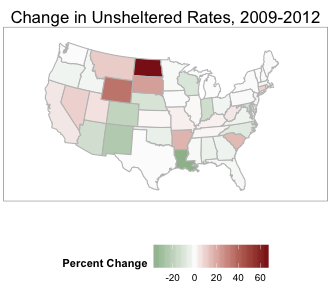 The unsheltered homeless population is the number of people sleeping on the streets on a given night, and is, at best, an estimate. However, some states saw significant shifts in the percentage of the homeless population that went unsheltered, with North Dakota’s unsheltered rate rising a troubling 60 percentage points. This aligns with reports of surging rent in light of bubbling populations, as people flood into North Dakota looking to work in the growing oil industry. Conversely, Louisiana’s unsheltered population dropped by over 20 percentage points, as more years separated the healing city from the devastation of Hurricane Katrina. 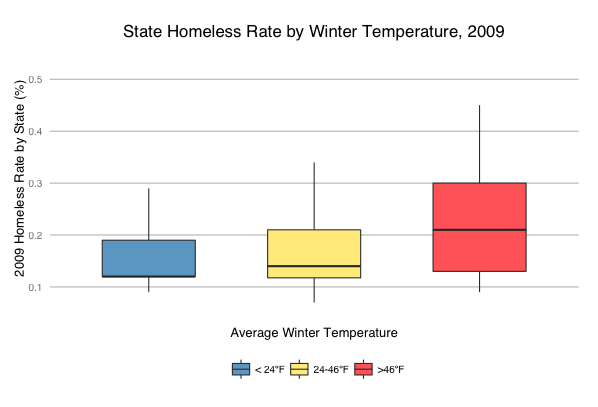 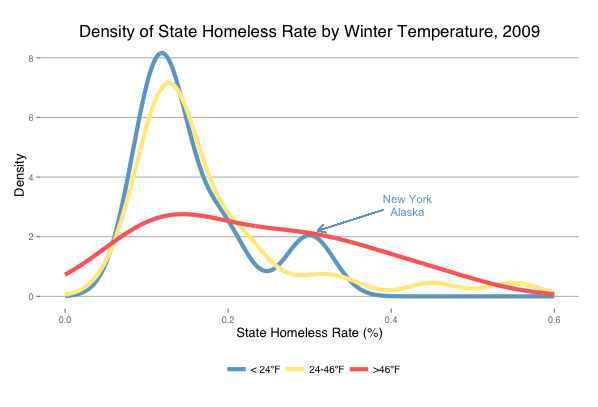 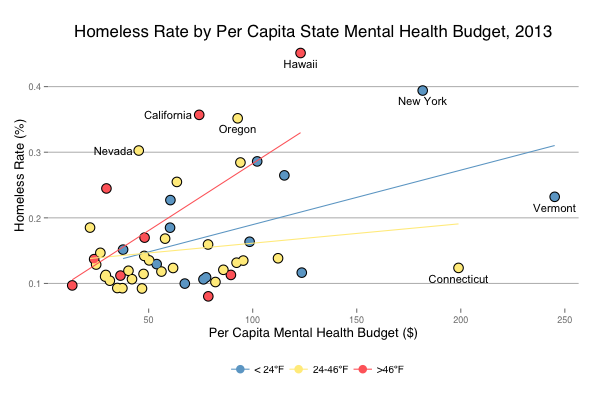 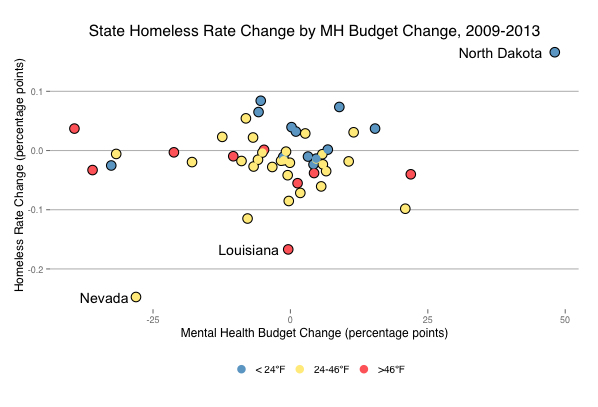 For more on mental illness and homelessness, these worthy organizations have lots of great information and prominently placed donate buttons, if you feel so inclined.

National Coalition for the Homeless

Jake Lehrhoff is a man of many hats. Currently, he is an analyst at Spotify, helping to improve an already amazing product. Previously, he spent six years teaching middle school English and chairing the department at a school...
View all posts by Jake Lehrhoff >