Our body is an amazing and complex system. Any imbalance in the system can result in significant consequences. According to data, this is the case for the blood sugar level in our body. Insulin is hormone produced by the pancreas and controls how the body is using sugar. This sugar, otherwise glucose, coming from carbohydrate in the food used for energize the body or stored for future needs.

Thus, insulin helps to keep the blood sugar in balance between getting to low or getting too high. Diabetes is a disease when our body is not producing enough insulin to keep this balance. Diabetes may further lead to hearth, lung, digestive and nervous system related issues.

This project aims to understand the relationship between patient data and patient readmission rate to hospitals. The added value has two sides, on one hand the patient care quality is improved, on the other hand the hospital care cost is reduced by preventing early readmission of patients.

Develop a model to predict the probability of readmission within 30 days for given patient based on patient records. Recommend actions and model deployment based on predictive model results.

The given dataset is 10 years of clinical care data from 1999-2008. It contains 100,000+ observations and 50 Features. Observations are diabetic patient encounters in hospitals. The dataset has missing values, numerical and categorial features. Many numerical features are encoded values. The target variable is categorical. The dataset is imbalanced with a minority class  of 10,000 readmitted patients. Also, graphs were created to visualize the distribution and frequency of specific features during univariate analysis. 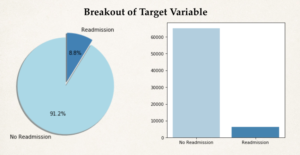 The granularity of categories within features required aggregation. To give a couple of examples, the 716 different medical diagnosis (numerical IDC) codes were reduced to circulatory, respiratory, digestive, diabetes, musculoskeletal, genitourinary and neoplasm groups. The 72 medical specialty were reduced to general practice, internal medicine, surgery, other and missing groups. Admission and discharge features were reduced to three and two groups respectively. 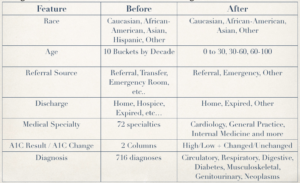 The final feature set resulted in 28 columns after one hot encoding the categorical variables. Also, to ensure independent observations, patients having multiple encounters were reduced to one by keeping only the first record. This way, the cleaned dataset that was used in the model had 67,000 rows.

While there are powerful classification models, for this project the more simple, easily understandable  logistic regression was chosen.

The data was split into training and test set. Cross validation was implemented to avoid overfitting.

These mistakes provided a great learning experience in how each development step influenced model predictive performance. These issues were fixed, precision and recall scores were chosen as metrics on the test set. Several upsampling methods were applied to only to training data set. 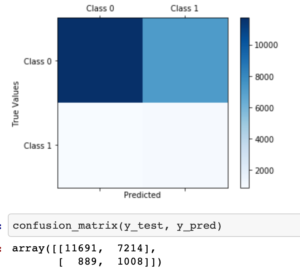 The Receiver Operating Characteristic curve is used for this binary classification model to visualize the ability to separate the readmitted patients from the rest by varying the probability threshold. 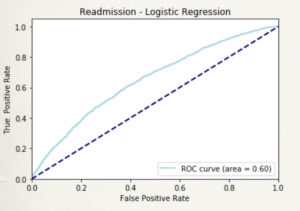 Decile analysis was used to show the ability of the model to consistently group patients based on the probability of readmission from low to high. It also depicts how much more likely a patient to be readmitted in a group compared to the average probability. 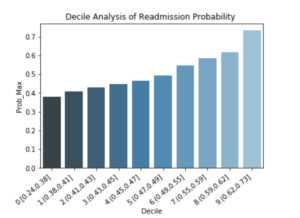 The data engineering team is able to deploy the model by developing a Shiny R dashboard with an interface to model developed in python language.

The data science team shall continuously observe the decile chart data to evaluate the performance of the predictive model.

Given the lower than expected predictive power of the model with ROC score of 0.6, further feature engineering and selection would be accomplished, including the use of interaction terms.

The Shiny R  dashboard can be developed as part of the project given additional time and resources.

Further reading and deeper insight into the medical care industry and diabetes shall suggest additional steps at feature engineering.

He received his diploma from Stony Brook University in Electrical Engineering. He developed digital circuits for application and microprocessors. He is a strategic leader with years of experience in solving highly complex problems through development and production-related projects.
View all posts by Karoly Lajko >