Correlation was found by combine the data into a Pandas data frame and checking Pearson's coefficient.

National Park Visitation as a Whole: 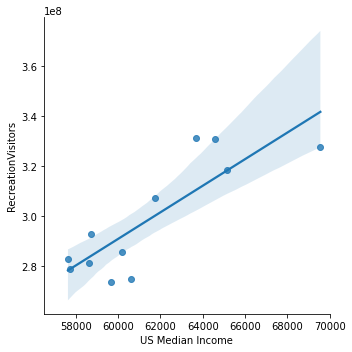 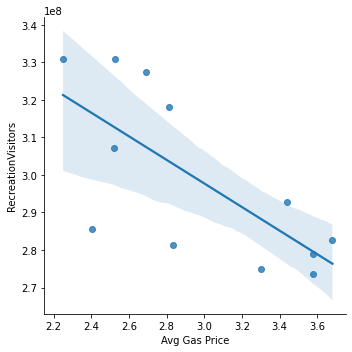 This shows that both factors are strongly correlated to National Parks visitation but not all National Parks are equal. Some parks see millions of visitors each year while others see barely over 10,000. Perhaps there are some differences between popular parks and unpopular parks.

The popular parks saw a correlation most like the total visitation with median income being .83 and average retail fuel prices being -.71. 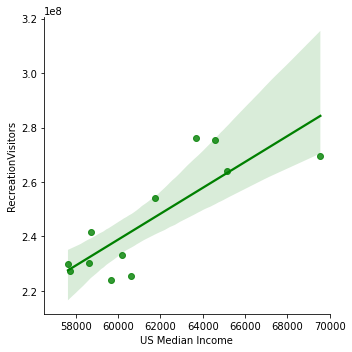 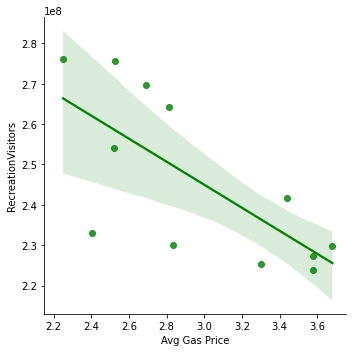 On the other hand, unpopular parks visitation did not have have as strong of a correlation with economic data. While the correlation of visitation and median income was .82, the average retail fuel price's was only -.61. 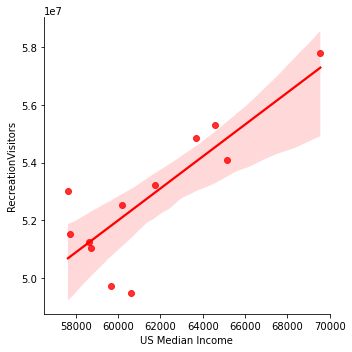 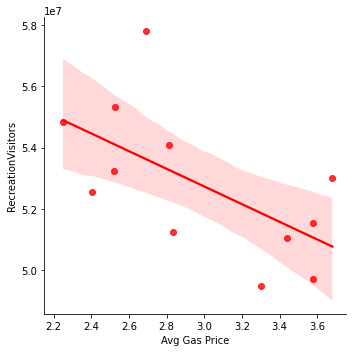 I had initially expected a larger drop off of correlation for both due to the fact if someone is willing to visit one of these parks they most likely would regardless of economic factor. I then thought that if I could possibly take a look at more localized I data I could possibly find a stronger correlation (for example if a park was located in California, it's visitation would be more correlated to California economic data). I ended up taking data from one popular park and one unpopular park and compared it with their respective state data. 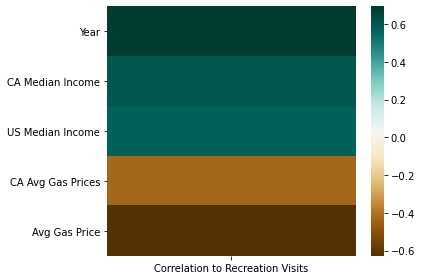 While the local data in terms of median income was stronger for Yosemite. It still was not very strong. Also US retail fuel prices had a stronger correlation than the local data. 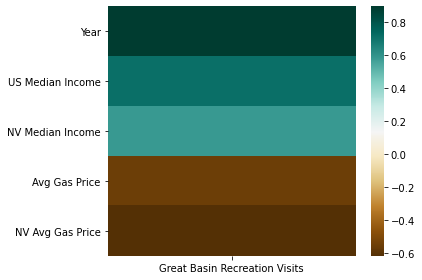 In this case the local retail fuel prices had a stronger correlation than the US data but once again it was not very strong.

While not a lot of data was taken for the local cases, due to the fact that the correlations were not as strong I decided to keep the initial recommendation to the NPS general.

The recommendation is based off taking 50% from the correlation coefficient of the economic data to play it safe and test the success as time goes on. Success is determined if the NPS is able to accommodate guests without having too many people on staff.

While I think this could end up being successful, the recommendation does come with the caveat. After going through the data I do not fully believe that economic factors are most influential.

While I was going through the data comparisons. I noticed that the year had the strongest correlation to National Park visitation. So I pulled a graph of visitation over time. 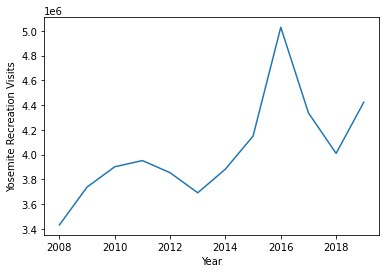 I noticed that there was a big jump after 2013 and wondered what that could be. Turns out, a possible answer was right on my phone. 2013 is when Instagram's popularity began to explode. While it may not exactly be causation, Instagram users over year had a .81 correlation coefficient to National Park visitation. While this data is relatively unrelated, I believe that looking at Instagram photos taken within National Park boundaries over time may yield a stronger prediction.

Thank you for reading! Github repository with link to the slide deck can be found here.

Hello! My name is Jacob Smith. I am an University of Arizona alumni.
View all posts by Jacob Smith >