How Much Do Data scientists Make?

Contributed by Amy(Yujing) Ma. She is currently in the NYC Data Science Academy 12 week full time Data Science Bootcamp program taking place between January 11th to April 1st, 2016. This post is based on her first project - R Visualization.(due on 2th week)

Which figure is more reliable? As a foreigner, I wondering how much can I make as a data scientist. In addition, since lots of people are considering making a career as a data scientist, I thought it might be useful to identify the locations, and companies people want to apply to based on the median salaries and number of job openings.

When a US company wants to hire foreign workers, they need file applications to get approval from several government agencies. To ensure equity for the US and non-US workers, companies have to state the job title, related requirements, and how much they are planning on paying the employee every time they submit a visa or green card application. The Office of Foreign Labor Certification (OFLC) provides the application data on its website.

This data contains 167,278 records from the Labor Condition Applications and the permanent resident applications from 2008 to 2015. Since most of the application on data scientists are in 2014 and 2015, this analysis would not do any researches based on time.Even though this dataset is primarily based on foreigner workers, the analysis is also useful for native workers.

Do data scientists have higher or lower salaries than others?

Compared with other jobs, data scientists have higher median wage than other data related jobs (such as business analyst and data analyst).

The result shows that median salary of data scientist is $108,021.04 per year, which is lower than $116,840 provided by Glassdoor. This difference may be caused by mixing different years’ data together, or visa types.

Do salaries change based on visa type?

Since there are not enough observations in “H-1B1 Chile”" and “H-1B1 Singapore” groups, I only compared 2 groups: “Green-Card” and “H1B”, the result indicates green-card holders make more. 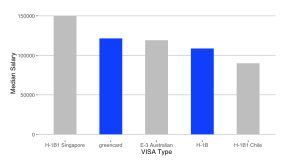 Do salaries change based on education and related experience?

If a job has specific requirements on education and experience, the company have to input the required in the application. Based on this part of data, the result shows that people have plentiful past experience earn more than others (8.53%); Those with doctorate degrees earn vastly more than counterparts with some master degree (10.7%).

Do salaries change by location?

To identify the locations based on the median salaries, I classified the data by location based on different criteria:

1. By the Number of Jobs

California, New York, Washington, Texas and Massachusetts are the top 5 states hire most of the data scientists.

In terms of median salary, the top-earning location is California followed by Washington, while New York is the third.

Only compared to median salary is not enough, what if we consider about the cost of living in the location of different jobs? Does California still offer the highest median salary in the U.S.?

To answer this question, I adjusted salary for cost of living by blending price parity with median wage data 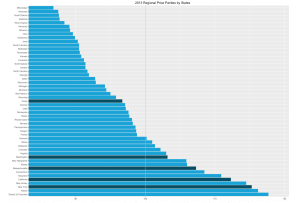 Based on the median salaries adjusted for the cost of living, the result is totally different; Arizona grabbed the top spot on the top-earning location while California and New York dropped to No.4 and No.14 on this list.

Who pays better? Who hires more?

In this sections, I want to know what companies tend to hire more data scientists and pay higher median salaries. Based on the states that offer most of the data scientist positions (CA, NY, WA, TX, and MA), I ranked the top 5 companies in these 5 states by different criteria:

When breaking down by state, the list of companies who offer more opportunities are quite similar; They are all large global companies, the result is reasonable since these tech giants lead the big data trends.

In this treemap, each company is mapped to a geometric shape whose size is the number of jobs they offered and colored by the median salaries of data salaries (Max=Blue). 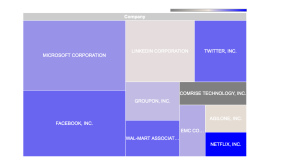 I also created a similar treemap based on median salaries of different companies. The graph presents us exactly in each state, what companies have the highest median paid wage. The result indicates that new technology companies are willing to pay more to hire data scientists. 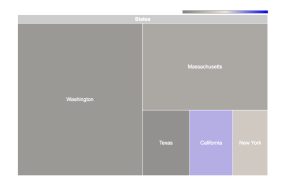 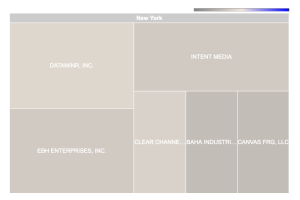 The Supply And Demand Of Data Scientists: What The Surveys Say