Insights of Wildfires in California

Wildfires, a longstanding and frequent threat to California, are expected to increase in intensity and frequency. While wildfires are obviously a significant threat to property and public safety, they can also significantly affect air quality by increasing the amount of particulates in the air. Climate changes and human activities have both contributed to the observed changes in fire, but understanding the nature and magnitude of these impacts has been challenging.

From 2005-2015 California has had some major and minor wildfires. The ignition causes, spread and effects of climate are portrayed in this blog.

Data for this study is obtained from The United States Department of Agriculture Forest Service https://doi.org/10.2737/RDS-2013-0009.4. This data publication contains a spatial database of wildfires that occurred in the United States from 1992 to 2015.

For analysis subset of the data for California ranging from year 2005 to 2015 is used.  Additionally METAR data was obtained from http://www.prism.oregonstate.edu/explorer/bulk.php  to study the influence of climate changes on the wildfires. Key variables in METAR data are temperature, precipitation & Vapor Pressure Deficit (VPD).

Quick glance on the Number of wildfire incidents in California between 2005 and 2015 is represented by graph below. 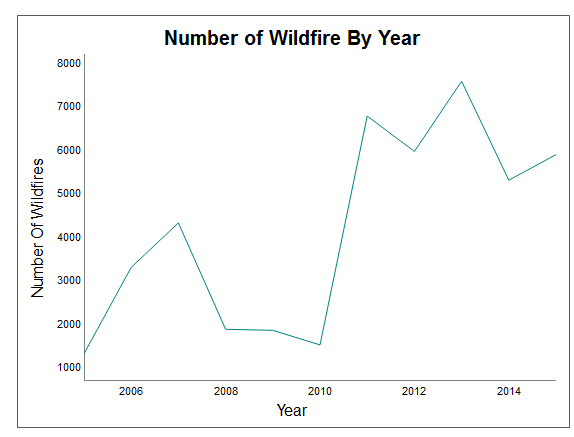 We see that wildfire incidents have been on a rise since 2011.

An interactive map of the breakdown by county is available in my Shiny App. In this map, size of the circles represents the area of the spread. 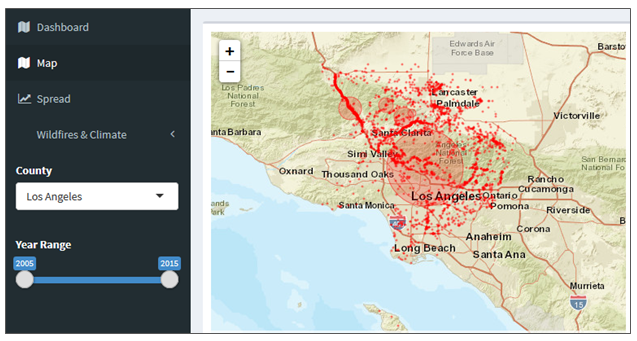 Fire season has been starting sooner and ending late since the past several years. From the graph below, it can be observed that the wildfire season was during May to September. Over the years we can see that it is starting from March to November/December. The wildfire season in California has been summer and fall. But there’s growing evidence to indicate that it’s now becoming year-round.

Also there have been nonseasonal wildfires during the month of January starting from 2011. This leads to further research on the effects of the climate. 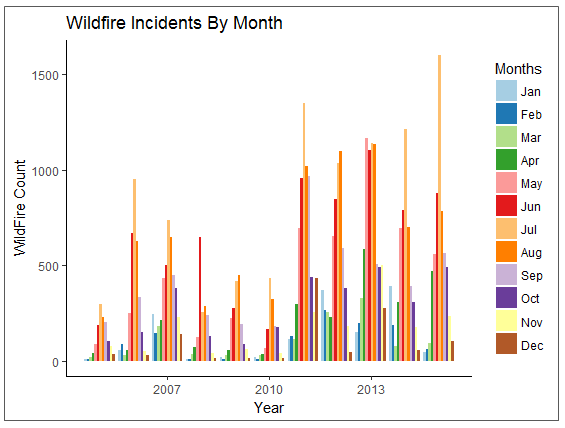 The cause of wildfires varies throughout California.  Common causes of wildfire ignitions include arson, lightning, power-lines, equipment, and fireworks. Per analysis human involvement is one of the major contributors for the cause of the wildfires, arson being primary.

In addition to examining the causing factors, analysis also considered time-dependent, weather-related factors. California experienced extreme drought conditions and found that it was significant. Fire caused by lightning has the major spread. 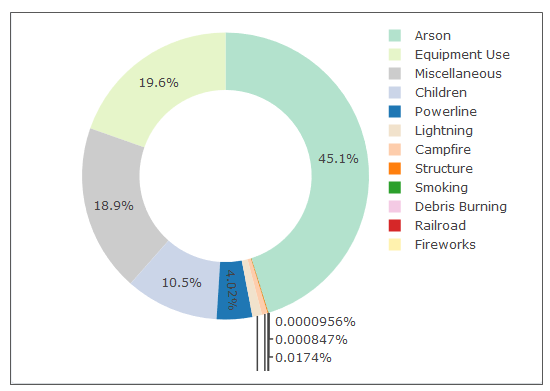 Weather plays a major role in the birth, growth and death of a wildfire. Drought leads to extremely favorable conditions for wildfires, and winds aid a wildfire's progress. Weather can spur the fire to engulf more land.

The spread of wildfires varies based on the moisture content and weather conditions. There are three weather ingredients that can affect wildfires: 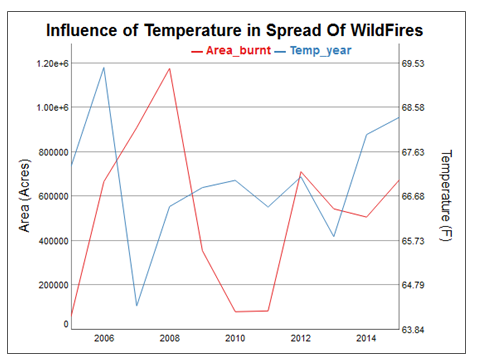 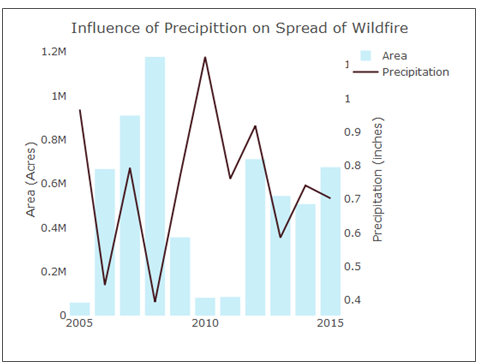 we  see that  2006- 2009  saw a huge increase in the acreage burnt as well as the number of the wildfires. Precipitation during this     period was significantly low. 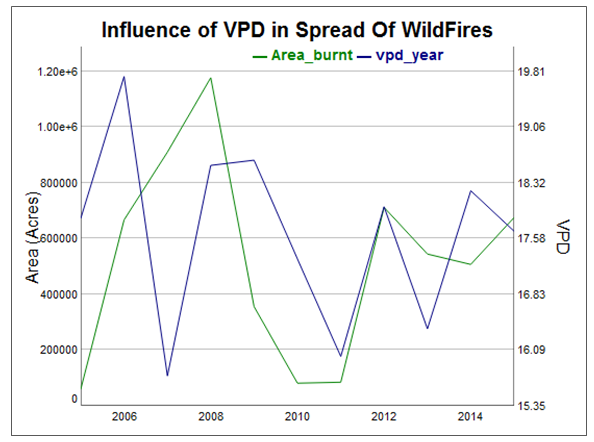 While there are many factors that may influence the past trends, climate change is expected to significantly impact California's forests and contribute to an increase of wildfires.

Yes, indeed wildfires in California are on a rise. Just about to finish the study, I learnt that California saw a devastating wildfire till date. Climate changes and human activities do play an important role in the spread and cause of wildfires. Fast and effective detection as it is a key factor in wildfire fighting. Early detection efforts were focused on early response,  and the ability to prioritize fire danger.

View all posts by Manasa Godkhindi >