This dashboard was created by using a random sample of 500,000 records from the LendingClub data on issued loans. The original data set contained more than  2 million records. In order to create the Shiny app, the data needed to be sampled to meet the size requirements. Throughout this post, I will refer to the data as the sample set. The data consisted of loans issued from 2007 to 2018. Again, the data consisted of only loans that were issued to customers and not loans that were declined.

Briefly, I will discuss total funding by State. Next, I will discuss why people utilize LendingClub’s loan services. After that, the grades of issued loans will be examined. More specifically, the types of loan grades by purpose and the frequency of loan grades over time will be discussed. To conclude, funded loans and payment totals will be explored. This is meant to serve as an analysis of why people utilize LendingClub’s loan service as well as an initial look at the outcomes of loans.

LendingClub is a leading peer-to-peer lending service. The LendingClub (2020) company was founded in 2007. The company helps individuals acquire loans from other investors. LendingClub screens individuals for loan approval. Following screening, investors can analyze various metrics suited to their investment needs and risk tolerance. Once an individual is approved and investors choose to fund a loan, LendingClub aids the transaction process and services the loans. Investors and LendingClub earn money from the fees or interest. Meanwhile, borrowers can use the loans as they need.

LendingClub acquires information from borrowers, such as to why they are utilizing their services. The most frequented purpose for a borrower to use LendingClub was for “debt consolidation”, “credit cards”, or “home improvement.” This trend was closely maintained over time as well. However, the “other” category closely followed home improvement loans. 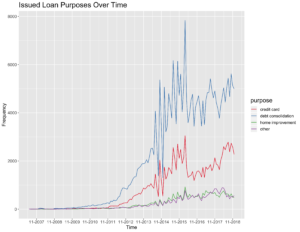 Issued loan grades were determined by LendingClub. Grades ranged from “A” to “G”. “B” loans had the highest proportion of issued loans at 29.4%. “C” loans had the second highest at 28.7% and “A” loans were the third highest at 19.2%.  This trend was observed over time, however, starting in early 2017, “A” grade loans started increasing. “A” grade loans even surpassed all other issued loan grades October 2018. 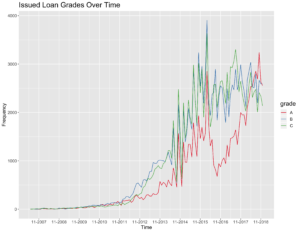 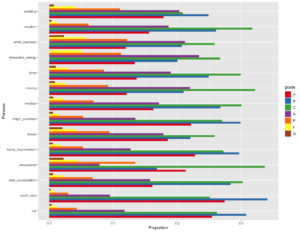 Approximately, 46% of loans were “fully paid” at the observation point. Additionally, 40% of individuals were “current” on their loan and 11.6% had their loans “charged off.” Kagan (2019) noted that a debt being charged off does not wipe the debt from the consumer and the “charge off” status can have serious implications for an individual’s credit. Typically, a charge-off occurs after 180 days without a payment. The lender determines the funds to be uncollectible, however, the individual is still responsible for the loan until it is paid or settled. Defaults and charge-offs are important for investors because they may be at risk of losing a portion of their investment with these loan statuses. 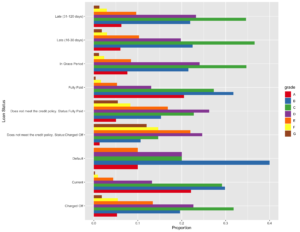 To calculate the estimated potential profit, I had to estimate the number of months into the term an individual was at. I did this by subtracting the last payment date from the date the loan was issued. I rounded to the nearest whole month. Then the months remaining could be derived by subtracting the number of payments from the term length. Utilizing the number of payments left in a loan multiplied by the monthly installment gave the estimated balance remaining. Finally, to estimate the total potential profit, I added the already paid amounts to the estimated remaining balance and subtracted the funded amount. The result was $3,907,621,984. This assumes that all remaining balances were paid without charge off.

However, this calculation could be more conservative. The percentage of loans that were not “fully paid” or “current” was about 13%. Again, to be conservative I rounded to 14%. I subtracted 14% from the estimated amount remaining and recalculated the estimated profit to be $3,135,708,931. That works out to be a 41% profit given these conditions. Furthermore, a 20% decrease in the remaining total would result in a 37% profit.

Overwhelmingly, the most frequent purpose for individuals to use LendingClub was for “debt consolidation.” The most common issued grades issued were “A,” “B,” or “C” grade loan. While the proportion of grades within each loan purpose varied “B” or “C” loans held the highest proportion of grades across most loan purposes. With respect to loan statuses, most loans were either paid off or “current.” The “debt consolidation” purpose held the highest proportion of purposes across all loan statuses, including “charged off,” “default,” “current,” and “fully paid.” Finally, I discussed the funding amounts and total payments and estimated various potential profits.

While the LendingClub was founded slightly before an economic recession, it has positioned itself to provide loans to millions of individuals across the country. With loans funded exceeding billions of dollars, consumers have a unique way to acquire personal loans while investors have found a unique way to diversify their portfolio.

LendingClub. (2020). How it works. Retrieved from https://www.lendingclub.com/public/how-peer-lending-works.action