Investing in a home is one of the biggest decisions a person can make, as real estate purchases make up a large proportion of one’s net worth. This makes it important to make good investments when it comes to real estate and know whether a home is priced fairly or even underpriced. In this text we will use data to predict Ames' home sale prices.

However, when it comes to predicting housing prices, many factors can come into play. The adage about location, location, location doesn’t tell the whole story. Neighborhood is an important factor, but it’s not the only one. Factors that affect a home’s price include considerations of size like square footage, number of bedrooms, basement area, garage size, and overall property area.

Overall condition and quality of the home is another key factor contributing to home value, which could be affected by the date and type of renovations applied. Our goal is to build a model using a Kaggle dataset collected from Ames, Iowa that can help both realtors and prospective homeowners accurately price a house based on its available features, so that a homeowner can know whether or not a house is worth the listed price. 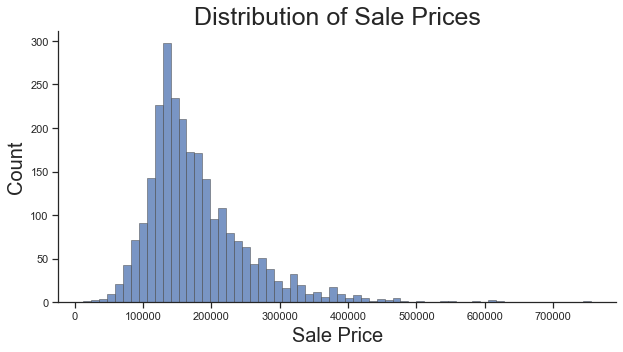 The original dataset had 2580 data points, each one representing the sale of a home, and 81 columns, each describing a feature of that home. The data was fairly right skewed with a few outliers with higher sale prices. 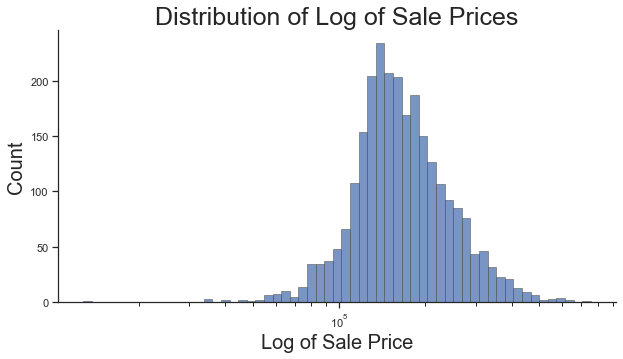 After a log transformation of the sale price, the data became more normally distributed, which improves the regression models, as can be seen later in the improvement of the model scores. The sale price outliers seen in the original data are less drastic after the log transformation and did not need to be removed for the analysis. 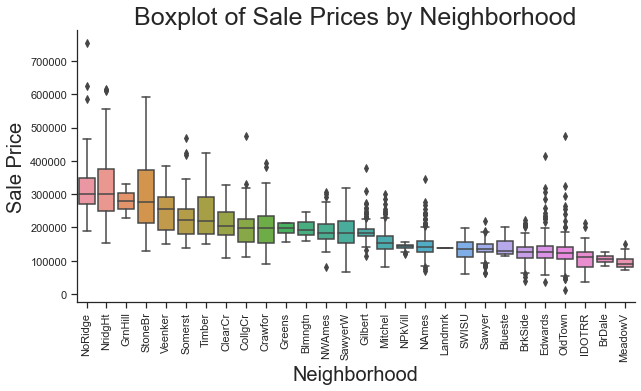 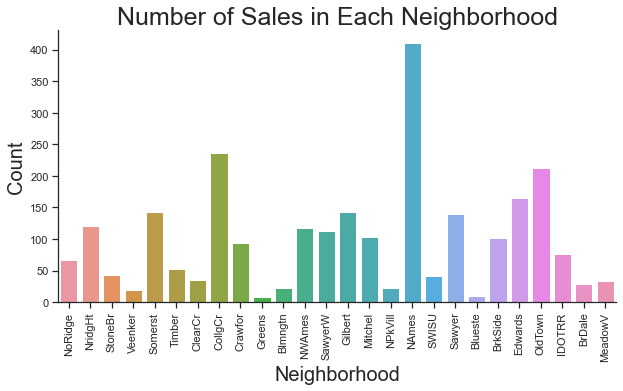 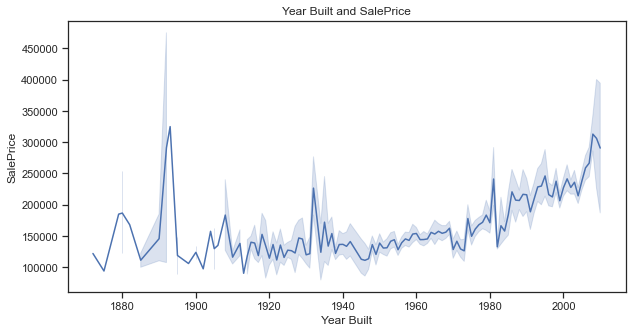 This plot shows the average sale price of homes based on the year the home was built. The shaded region represents the 95% confidence interval, and the line represents the mean for the year.  In general, as the year built increases, the sale price also increases. There are a few exceptions, with a high spike around the 1890s. We think that this might be due to fewer homes being built or remaining from that year, and some of them might be considered historic mansions. Despite some of the spikes, the year built plot shows that people tend to pay more for newer homes.

We were interested to see how they would differ by the year the home was built. To our surprise, they were quite different. The plot of quality and year built was more of what we were expecting, with newer homes tending to have higher quality scores, but overall there was a wide variety of scores across the years. The plot of condition and year built was surprising, with newer homes built after 2000 commonly having a condition score of 5. This shows that for these newer homes, there might have been a standard for filling in a condition of 5.

The data cleaning process included checking for duplicate rows, examining rows and columns with missing values, and imputing some of those missing values.

Each sale in the dataset has a unique property ID, or PID. However, one PID is repeated. Upon further examination, we found that  this sale had two identical rows, so we deleted one entry.

Next we checked for columns with missing values to determine which features may not add enough value to the analysis, or if any missing values will need to be interpolated. The chart below shows the percent of missing values by column. Several columns were missing values more than half of the time, including FireplaceQu (Fireplace Quality) and Fence. Several categories were missing value more than 90% of the time: PoolQC (Pool Quality), MiscFeature (describes if houses had features such as sheds), and Alley. We decided to drop PoolQC, MiscFeature, and Alley, since few of the home sales included this information. Fireplace quality was dropped as well, and we engineered a fireplace attribute and a fence attribute, as explained later on. 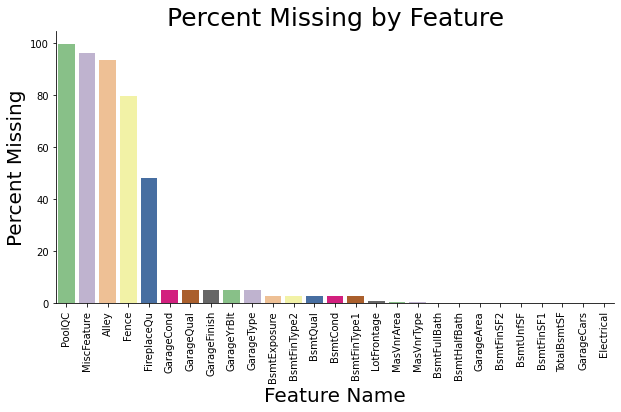 Lot Frontage was missing a relatively small number of values, but since the column did not share similarities with other columns, we wanted to retain the information. We imputed values for the home sales that did not include a Lot Frontage value. To do this, we looked at the average lot frontage of houses that were the same type of housing in the MSSubclass column (i.e. single family home, townhouse) and in the same neighborhood to estimate missing lot frontage values. We removed a few rows from the dataset which could not be imputed due to a lack of similar houses.

Finally, we removed many columns that seemed to provide overlapping information with other columns. We dropped several columns relating to the basement and garage. We also dropped non-descriptive columns such as Street and MiscVal.

We utilized feature engineering to create new interesting features with the data, as well as simplify some columns. For example, we created a new feature named “Remodeled,” which is a binary feature denoting whether the house had ever been remodeled. We subtracted the remodel year from the year the house was built, and if the value was greater than 0, the house was considered remodeled. 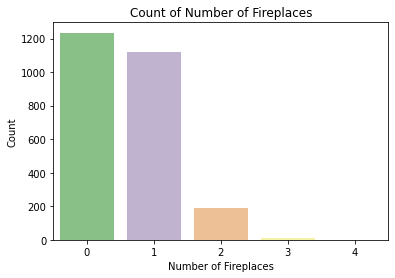 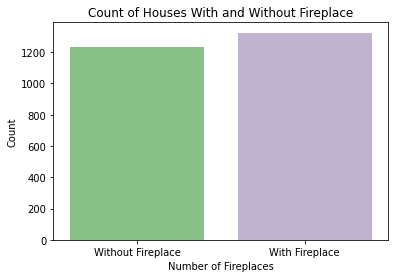 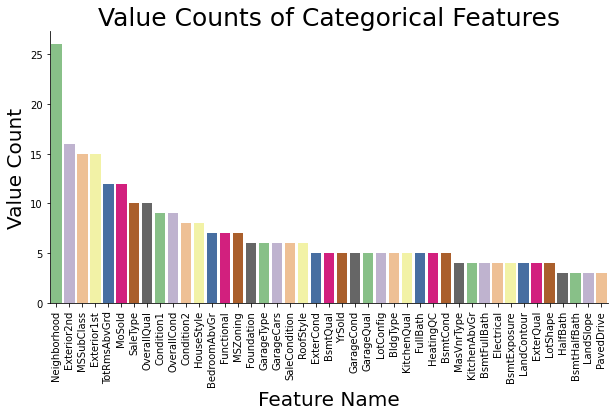 After completing the exploratory data analysis and feature engineering, the next steps were to build and run machine learning models. Models were selected based on which were most likely to have the highest accuracy. Two categories of models were selected, seven models in total. The first category is linear regression models, such as Multiple Linear Regression, Lasso, Ridge, and Elastic Net, and the second category, Tree-based Models, including Random Forest, XGBoost, and Gradient Boost.

Once the model selection was complete, we conducted a train and test split of 20% of the dataset.. Each model was trained on the training split, and grid search and cross-validation were done to tune the alpha parameter for Lasso, Ridge, and Elastic Net, and to find optimal parameters for tree-based models. The alpha coefficient acts as a control parameter. As alpha increases, the coefficients of less contributive variables shrink towards zero.

The main difference between Ridge and Lasso is that Lasso allows for coefficients to reach zero, whereas Ridge never sets the value of coefficient to zero, though they may become very small. For the linear models, gridsearch tested evenly spaced integers from 0 to 20.1 for corresponding models' alphas. For the tree-based models, grid search implemented different values for parameters such as n_estimators, max_depth, and max_features.

Different values for cross-validation were used, such as 2, 3, and 5. Cross validation is a resampling method that uses different proportions of the data to test and train on different iterations. For example, in two-fold validation, the dataset is randomly shuffled into two sets and each set in train and test on. Once the results were outputted, R2 scores were compared and checked for underfitting and overfitting. A check for underfitting or overfitting was done by comparing the train and test scores for each model and observing if their scores had a large disparity. A large disparity indicates an overfit. Underfitting would be indicated by low train and test scores.

During the model evaluation phase, linear regression models (Lasso, Ridge, & Elastic Net) demonstrated high R2 scores. Taking the log of the target variable and sale price helped further improve the models' performance. The improvement in model performance is due to Lasso's and Ridge's ability to decrease or drop feature coefficients to 0. This decrease in coefficients helped remove redundancies and the effects of multicollinearity.

To visualize the different scores outputted by the seven models, a table was built with each model's training and test scores. Despite tree-based models having higher training scores, their respective test scores were lower than their linear regression counterparts. 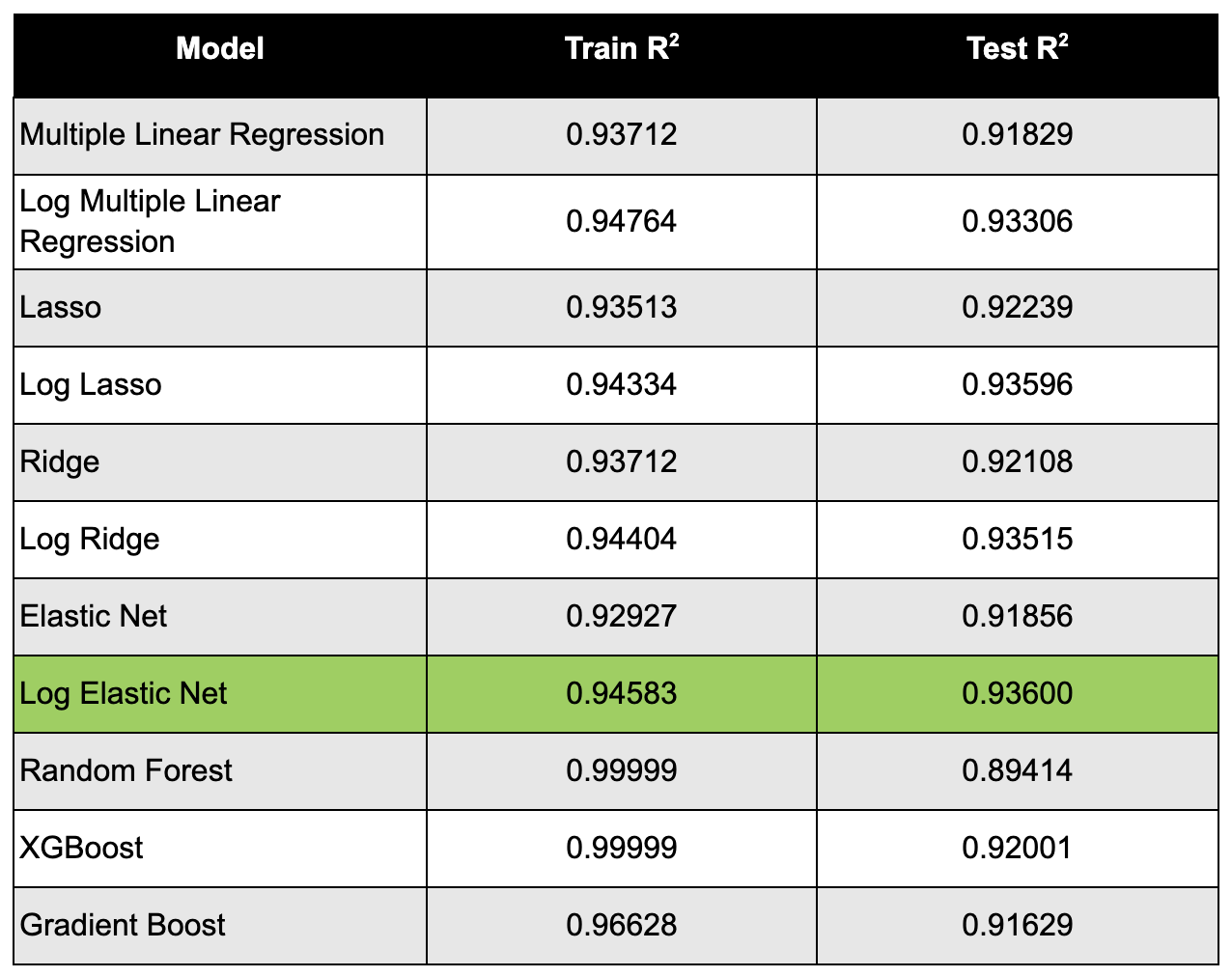 Based on the table above with the models and R2 scores, the Log Elastic Net model outputted the highest R2 – 93.6% – for their testing split. A 93.6% R2 score represents the proportion of the variance for the dependent variable, sales price, which is explained by the independent variables. This model has the best fit, most likely due to the log transform of our target variable, reducing the effect of outliers as well as the reduction of coefficients of less important variables through alpha penalization. 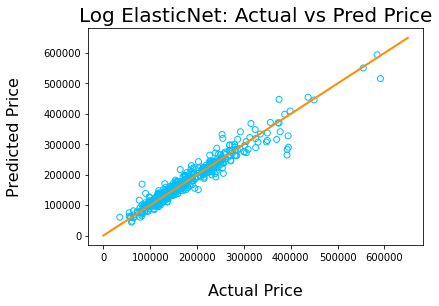 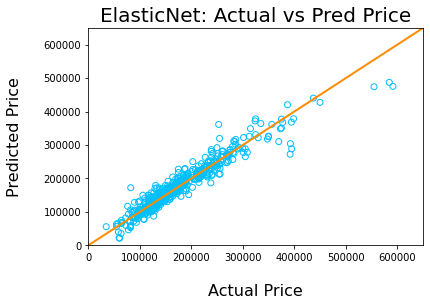 We were able to predict home sale prices in Ames with 93.6% accuracy using our best machine learning model. This will enable potential buyers and sellers to determine whether they are getting a fair price for a home. Buying a home is a big decision, and buyers will want to be sure they are making a good investment. Sellers will want to be sure they are pricing their home fairly in order to actually sell the house.

Analyzing the Ames housing price data doesn’t have to stop with regression and tree-based machine learning models. Future work could include using unsupervised learning, for example Principal Component Analysis (PCA) to group houses together and describe the dataset in different ways. Additionally, multiple models could be assembled together for greater machine learning power. Finally, an interface could be set up using R Shiny to allow users to see predicted sale prices for other homes in Ames based on our machine learning price predictions.

Data Scientist with a background in energy and sustainability. I'm hoping to apply my new skills in Python, R, and Machine Learning to make a positive impact on the planet.
View all posts by Caroline Keough >

Hi, I had my start in analytics with psychology and am interested in data science, particularly within social fields.
View all posts by Tam Trinh >