Our objective for this project was to use data to predict the Zillow Rent Index (ZRI) values for multifamily houses in the United States. In order to do so, we utilized a variety of publicly available data sources to feature engineer and develop new indices for prediction. Predictions were made through a variety of machine learning approaches.

The Zillow Rent Index is a dollar-valued index intended to capture typical market rent for a given segment of the housing market (i.e., multifamily or single-family units) and/or geography (i.e., on the level of zipcodes, city, county, state or metro area). This is done by leveraging Rent Zestimates.

We developed a set of research questions to clearly define our goals and to ensure we generated valuable insights. 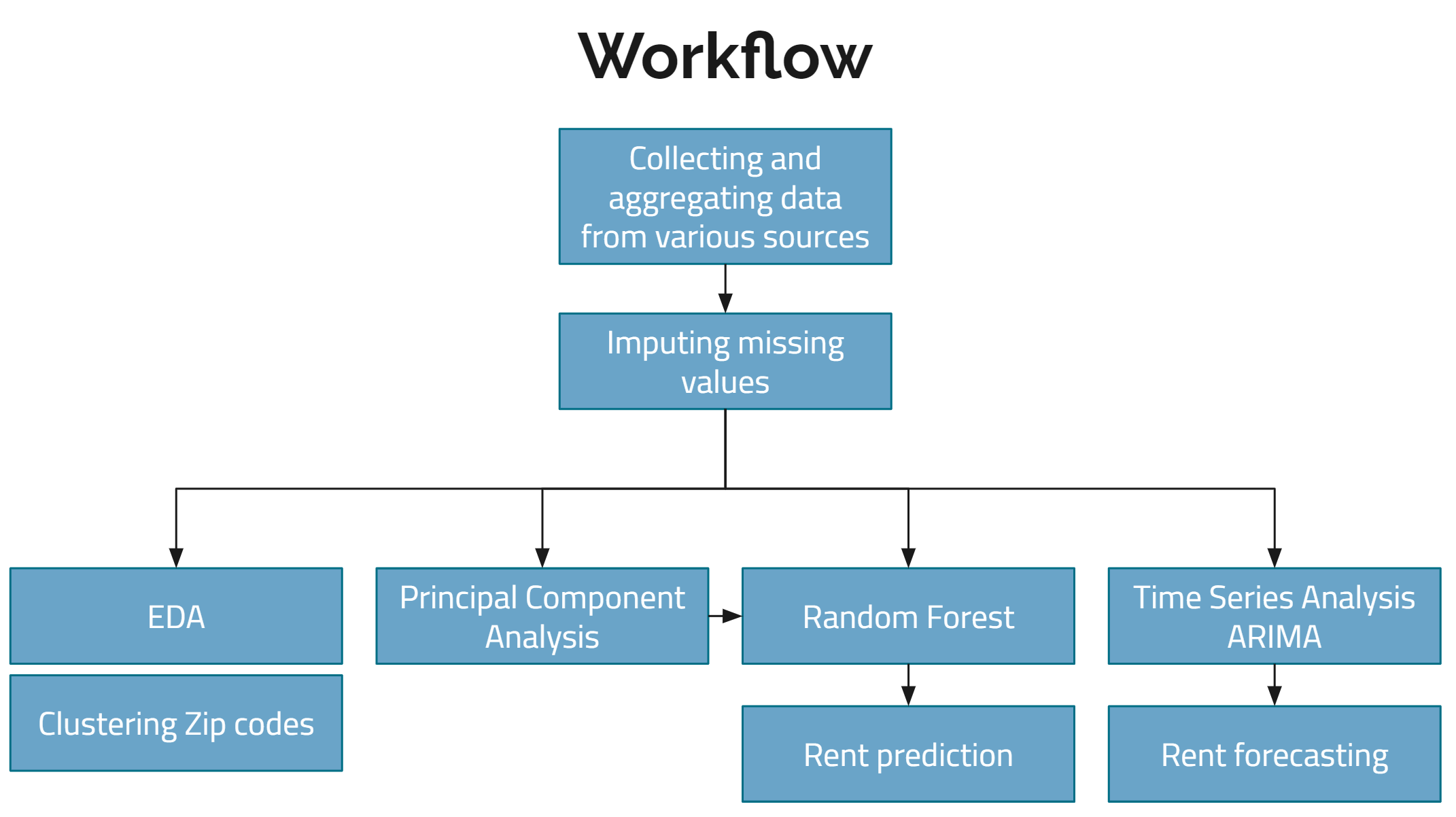 Using the American Community Survey (ACS) Census data, we engineered a variety of new features to utilize in prediction of the ZRI. Values were calculated at the zipcode level.

We also engineered new features by creating linear combinations of features from the Census data.

Once we gathered, cleaned and aggregated all of our data we began doing some initial analysis on the data. One of the first things we looked at was what rent trends there were in the timeframe we selected. To do that we looked at both the min, max and mean ZRI within the city over the timeframe as well as the zipcode in each city with the largest increase and decrease in ZRI from the beginning to end of the timeframe. 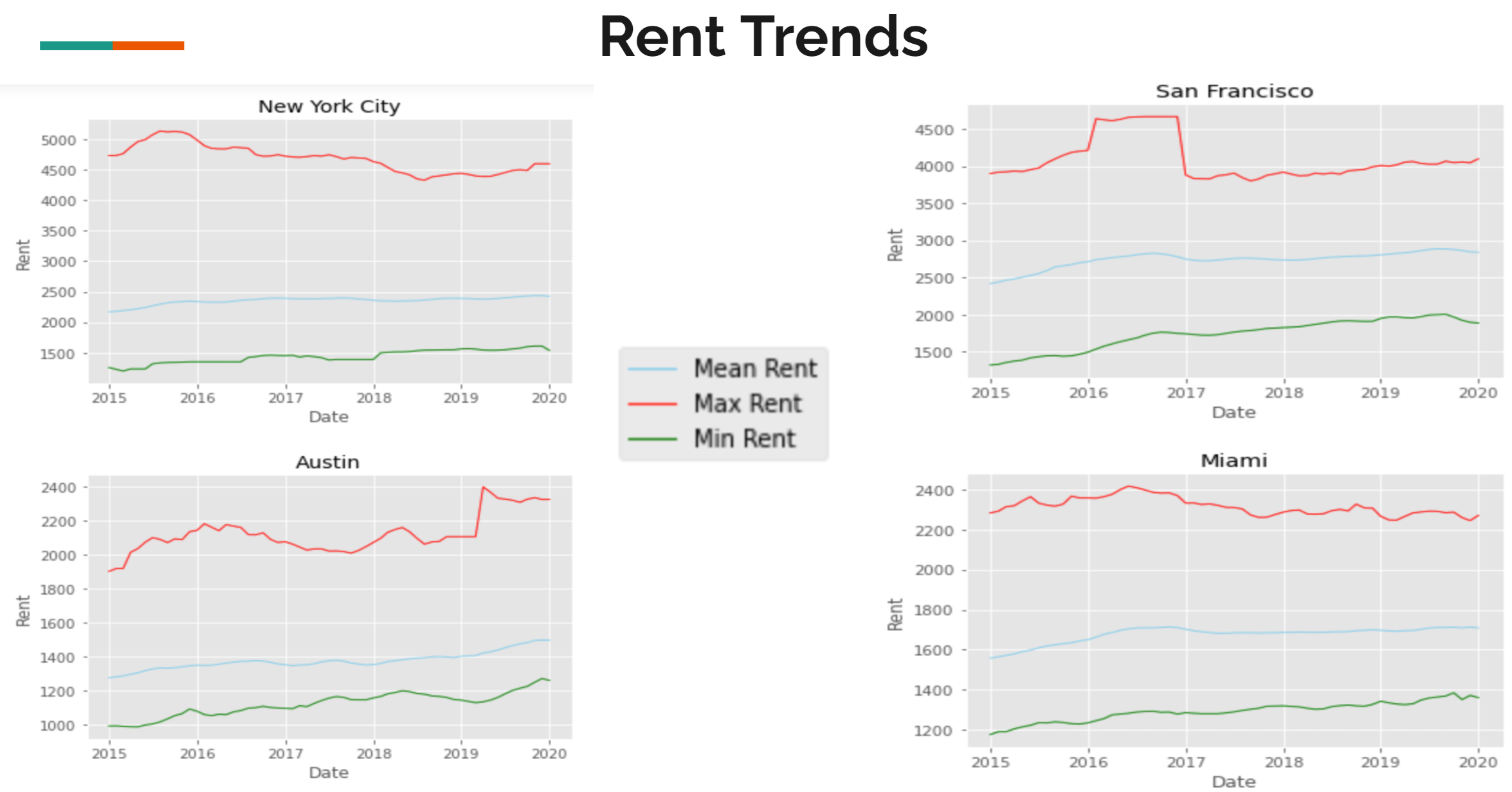 The trends we are able to notice here are that across all the cities ZRI has trended up over time, and in come cases every zipcode within the city saw an increase in ZRI (making the largest decrease actually the smallest increase).

Next we looked at the ZRI distribution across all of the cities. What we noticed is the the ZRI value tended to have a heavy concentration in a range of about $500 though where that was varied across cities. In Austin that range was around $1100 while San Francisco was around $2500, Miami was around $1500 and New York was around $2000. 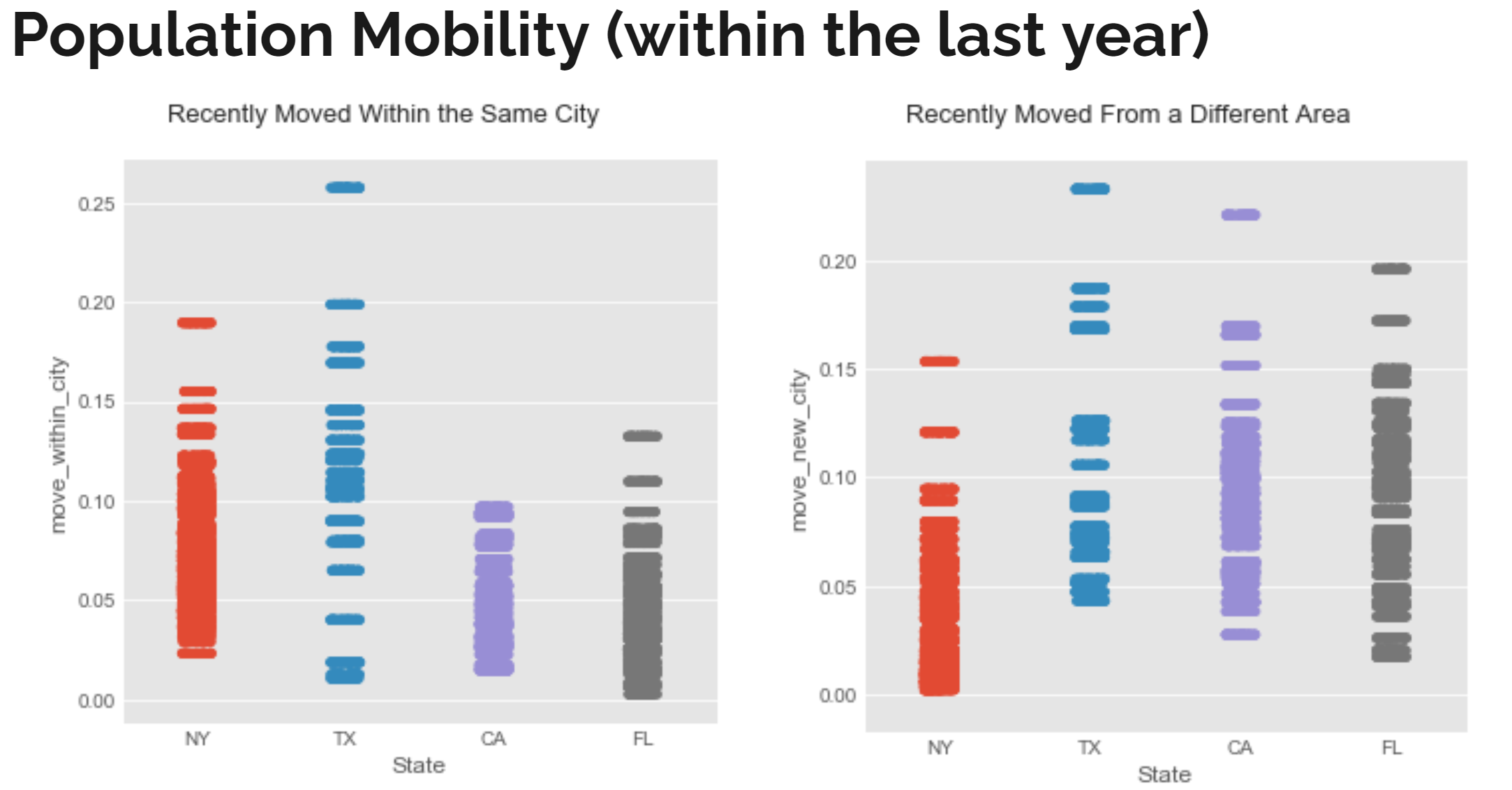 With data for 300 zip codes across four large metropolitan areas at hand, we were ready to begin our analysis.

We began by grouping the individual zip codes by socioeconomic factors such as income level, population and average commute time, etc.

To group the zip codes, we used a Hierarchical Clustering algorithm, omitting all geographical hints, rent information and focused only on socioeconomic features, referenced above. This resulted in four clusters and we plotted the medians for each feature in one graph to further investigate their relationship. All features were scaled. 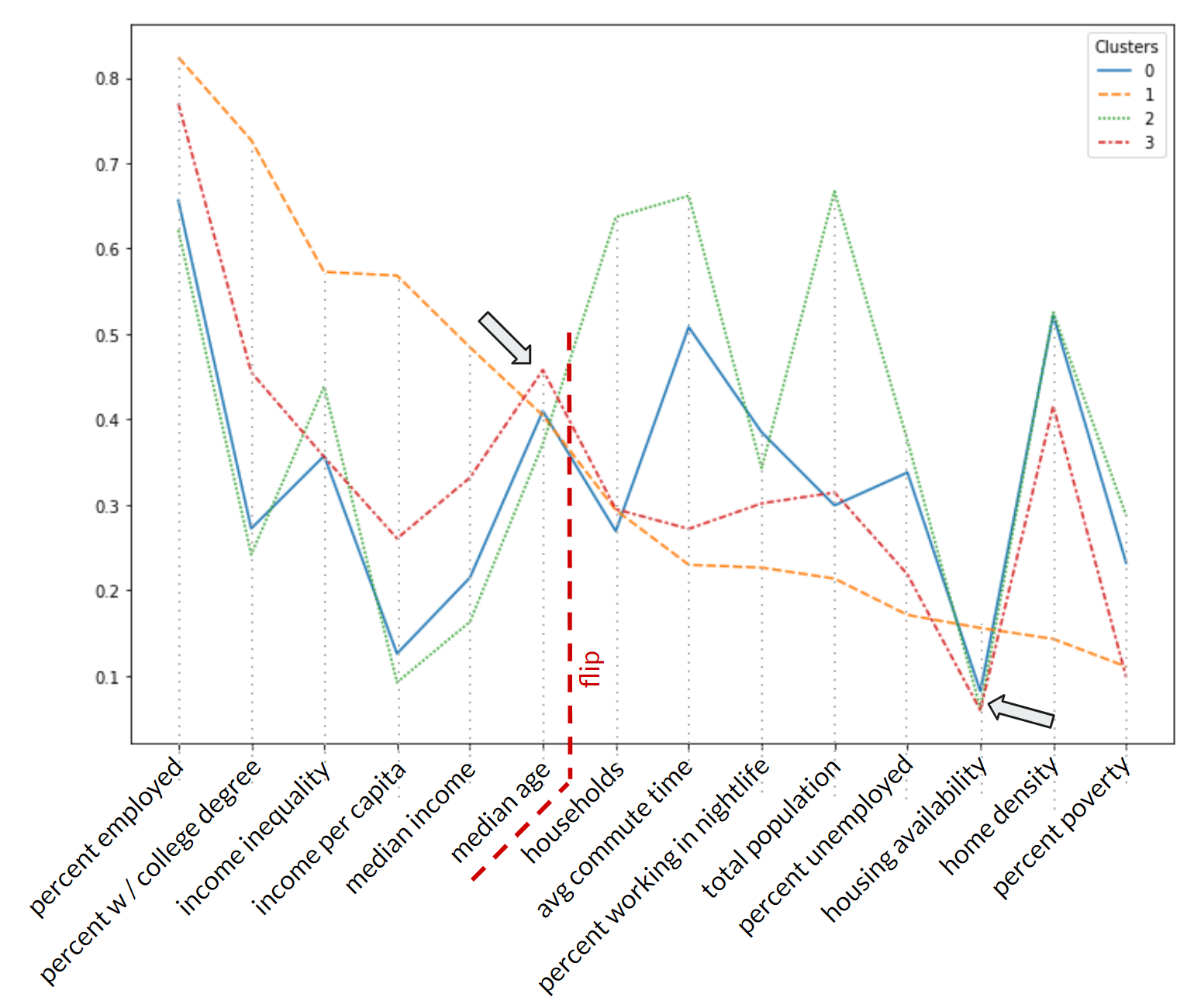 In the graph above we can see a general picture of socioeconomic situations in each cluster.

All clusters have similar median age and household availability.

ClusteClusters 1 and 3 (yellow and red respectively) are characterized by higher income, percent with a college degree, income inequality compared to the others, as well as lower percent unemployment and poverty, commute time, home density, and population. However, cluster 3 has higher home and population density than Cluster 1, but lower income and income inequality.

Clusters 0 and 2 are leading in home density, percent poverty, commute time, percent of the population working in the nightlife industry, having lower income, percent with a college degree, and income inequality. Cluster 2 has higher population, number of households, and average commute time than Cluster 0.

Let’s now examine how the clusters appear on the map.

Another curious thing is that Cluster 2, which has the lowest wealth characteristics but the highest population, is only represented in New York Area out of all four.

The majority of zip codes belonging to cluster 3 are represented in the San Francisco Bay Area, more precisely in the south-western part of the bay. Commute time for Cluster 3 is as low as it is for Cluster 1 (metro area downtowns) which tells us that this area should have a big share of jobs there, and we know this to be true, it’s the famous Silicon Valley!

To determine the most appropriate model for our data, we produced a correlation matrix of the features in order to assess multicollinearity. 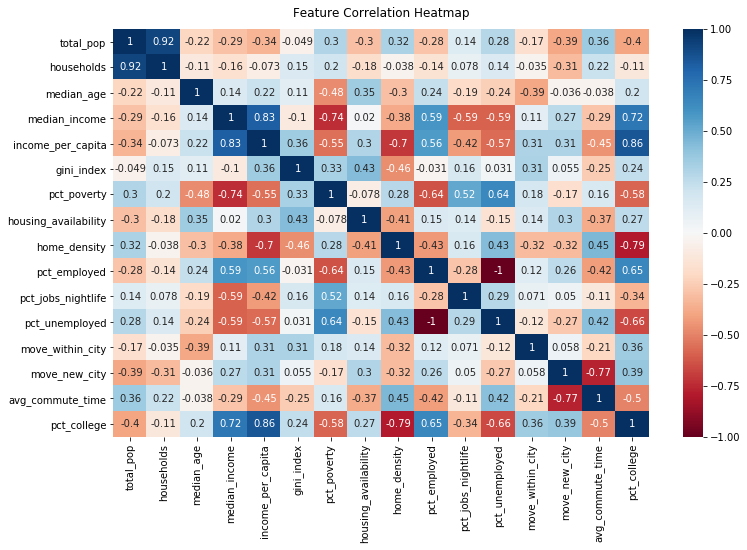 Given the high correlations between the features, one approach we took was to implement dimensionality reduction through the use of principal component analysis (PCA). Through PCA, it is possible to encapsulate the information from multiple features in a single feature. An unfortunate downside of this approach is that principal components are somewhat difficult to interpret (i.e., the influence of an individual feature is hard to ascertain).

To strike a balance and provide more interpretability, we selected two subsets of features to individually implement PCA on.

The first subset was made up of features relating to socioeconomic factors at the zipcode level. These included the engineered features: poverty rate, unemployment rate, nightlife workforce, higher education rate, and household density. Two additional features from the ACS were included as well: median income and income per capita. To ensure these features would be a good fit for dimensionality reduction, we assessed the correlations between this feature subset. 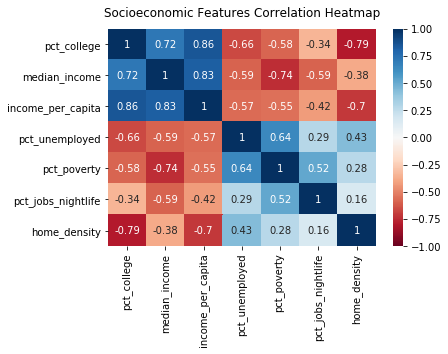 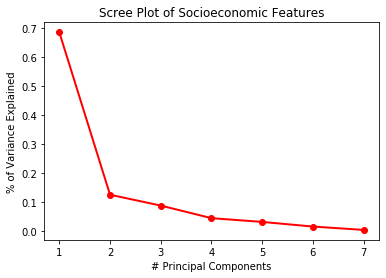 One downside to using a dimension reduction technique such as PCA is that some interpretability of the features is lost. When for example, SES PC #1 is highly important in a model, it is not immediately clear what practical implications that has. To provide further insight and interpretability of the principal components, we developed feature importance plots. 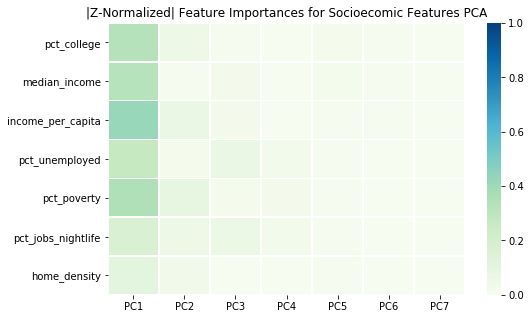 The second subset was made up of features relating to neighborhood characteristics. These included the engineered features: mean commute time and new city movers. Two features from the ACS were also included; these were the total population and number of households. A correlation matrix was produced for these features as well. 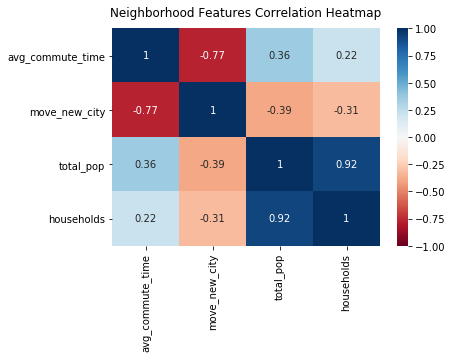 Analyzing the correlations of this feature subset, we found that many features were highly correlated with one another. There were strong positive correlations, such as the number of households in a zip code and the zipcode’s total population (r = 0.92). Strong, negative relationships existed between the features as well; for example, the mean commute time for workers in the zipcode and the proportion of the population in the zipcode that moved within the last year from outside of the current city  (r = -0.77). This indicated these features would be well-suited for dimension reduction using PCA. 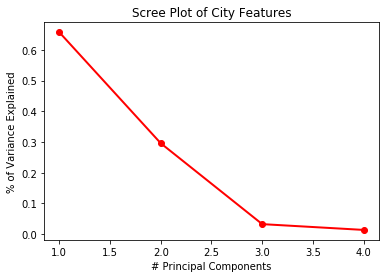 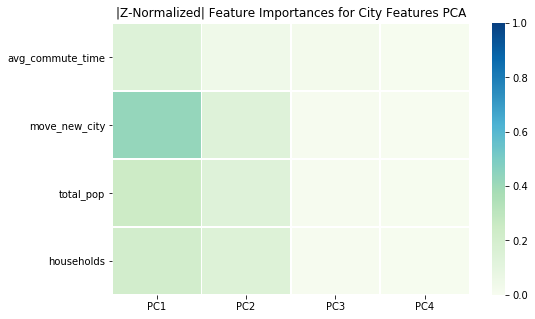 We originally wanted to use Linear Regression for the added interpretability of each feature’s impact on the rent index. However, the model did not explain much of the variance in the indices of our four cities. Therefore, we attempted a non-linear, tree-based model using Random Forest. The model was trained on data from January 2015 to July 2018 to predict rent indices from August 2018 to January 2020. The top five most influential features on rent index were: 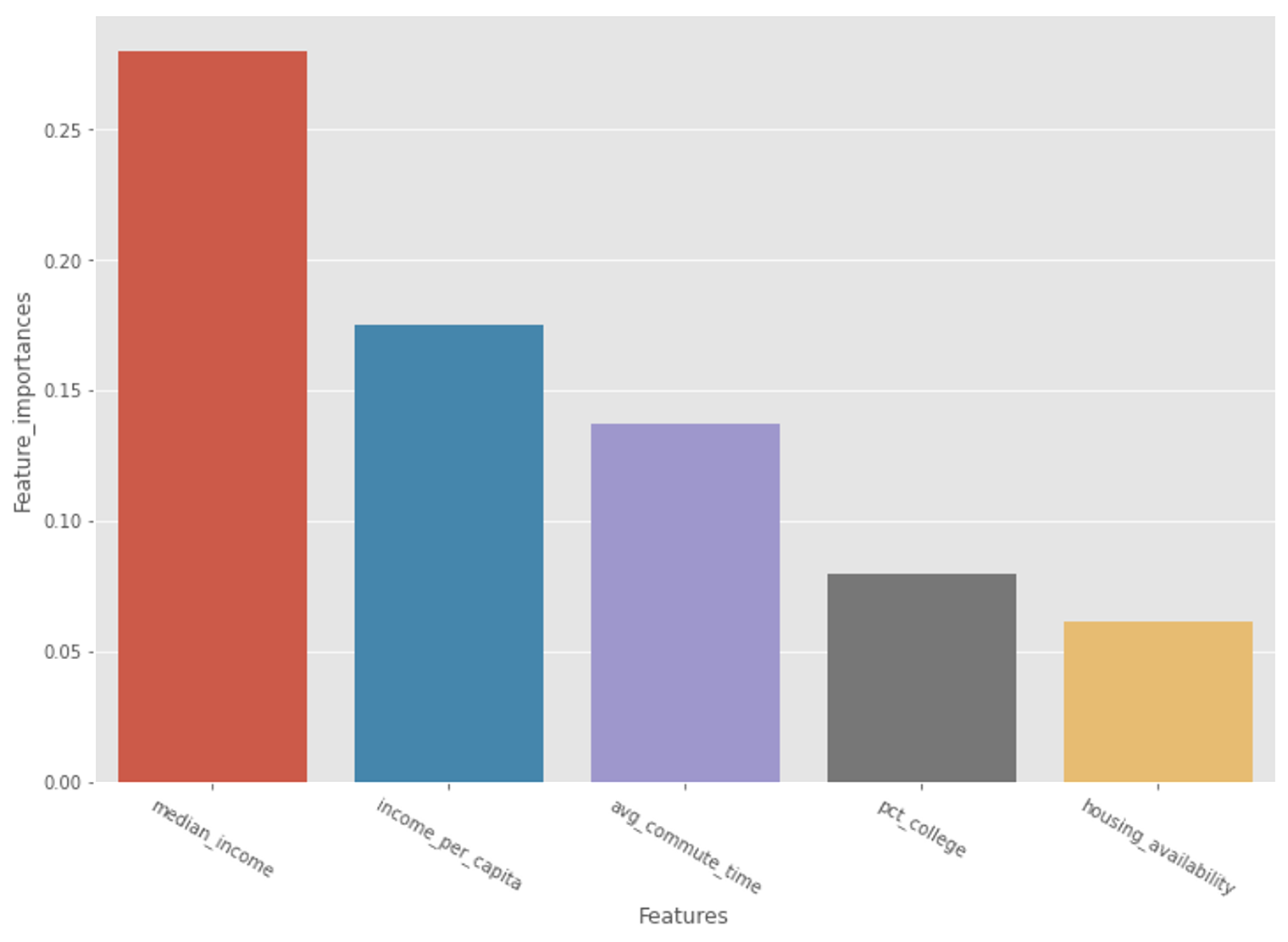 To ensure the validity of our model, the next step was to evaluate using cross-validation. The tricky part was that our dataset contained time-series data. Normally, a cross-validated dataset is split into an equal number partitions, with each partition given an opportunity to be part of the test set. If this method was used for time-series data, future rent indices would be trained to predict past rent indices.

Our cross-validated model explained approximately 95% of the variability in rent indices for the four cities, with errors ranging between $100-135. However, a $100 prediction error has different implications for an expensive Manhattan apartment compared to a low-income Miami neighborhood. To improve interpretability, we presented our prediction errors by metro area and in terms of the relative rental rate. 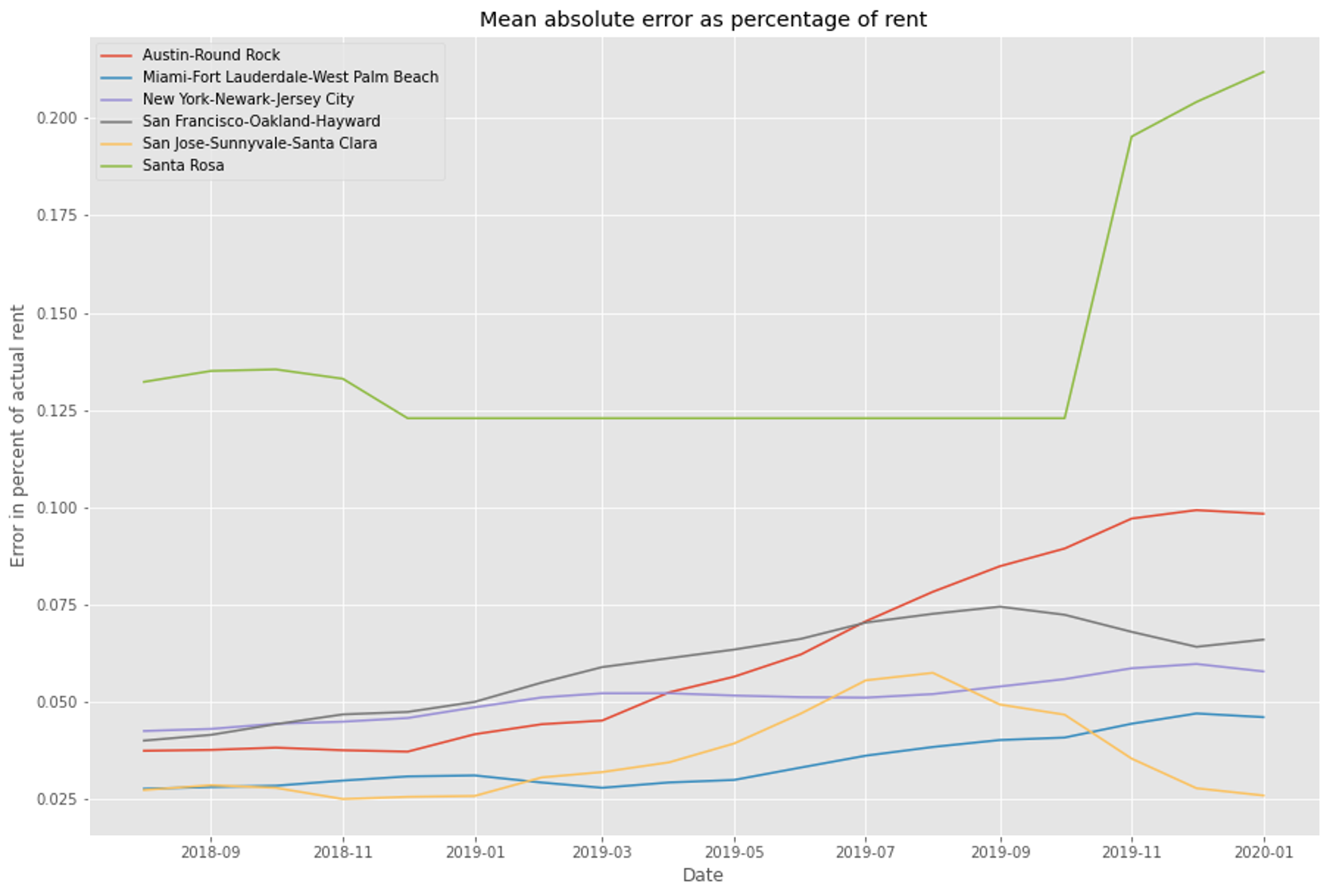 Most of the metro areas have similar errors over time with the exception of the Santa Rosa metro in San Francisco. Future work could delve into why the model is not as able to effectively predict Santa Rosa rents than all others.

We also fit a Random Forest regressor for each city in the dataset. Instead of using these four random forests to predict, we used them to determine what the five most influential features were for each city in predicting rent indices.

Income per capita was important for all cities except for Miami. One interesting finding came from the migration-related features. For Austin and Miami, the percent of people in the zip code coming to Austin or Miami from another city was important in their predictions of rent index. Whereas for New York City and San Francisco, the percent of people in the zip code moving from another zip code within the city was an important predictor. These inter/intra-city relationships should be explored further, particularly which cities people are leaving for Miami and Austin.

We also wanted to try using time-series models to forecast rent indices. The Autoregressive Integrated Moving Average (ARIMA) model requires no additional features, but requires that the dataset be stationary (no clear trend).

An autocorrelation plot determined the appropriate amount of lag to use. After selecting a lag of 5, and differencing the time-series data once to make it stationary, the model forecasted 17 months of rental indices for Manhattan in NYC. 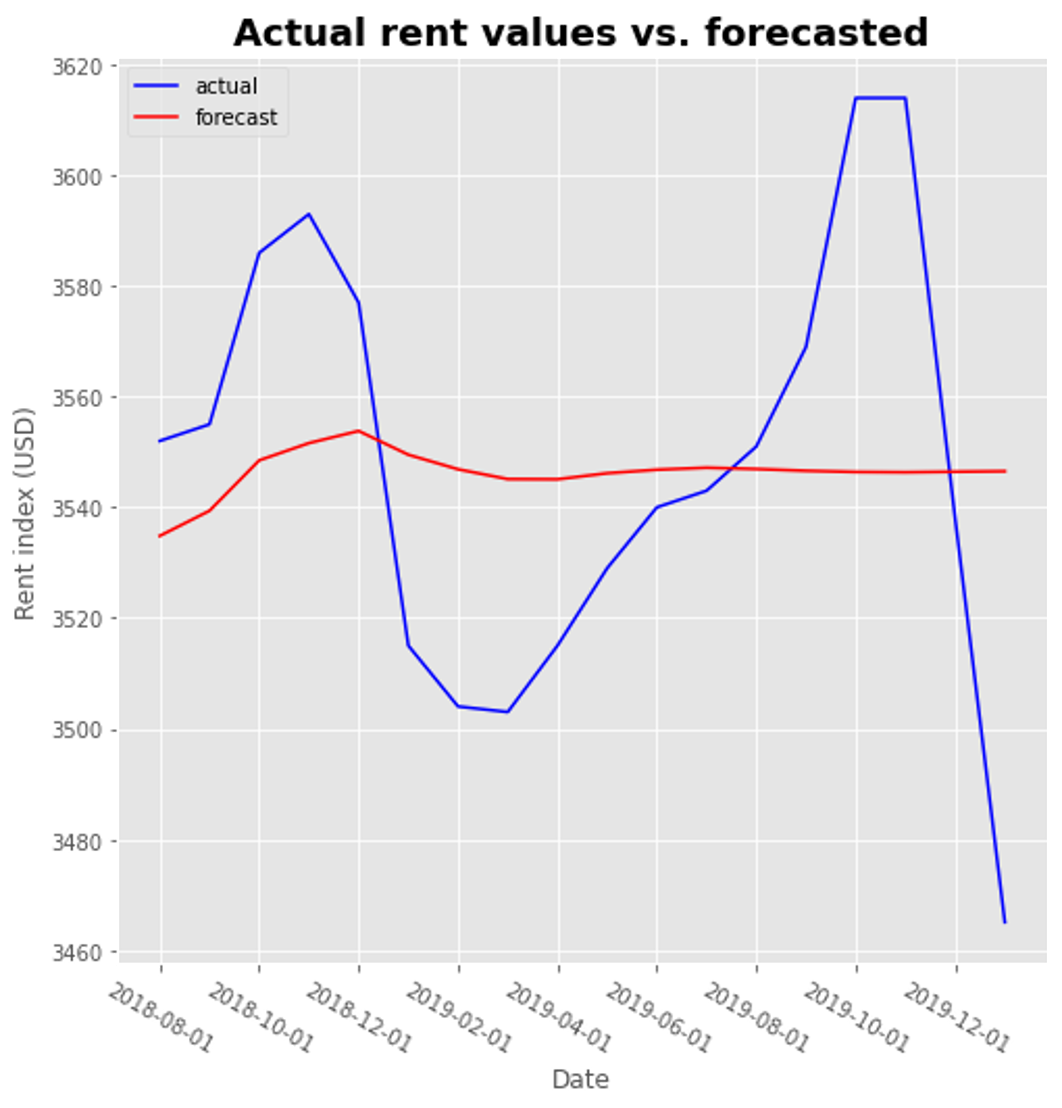 At first, the model predicts the seasonal changes in the rent index. However, the model failed to predict the variability that occurs at the beginning and end of 2019. This was our first attempt at time-series modeling, so we would like to explore parameter tuning and what other methods may better reflect the actual trends. 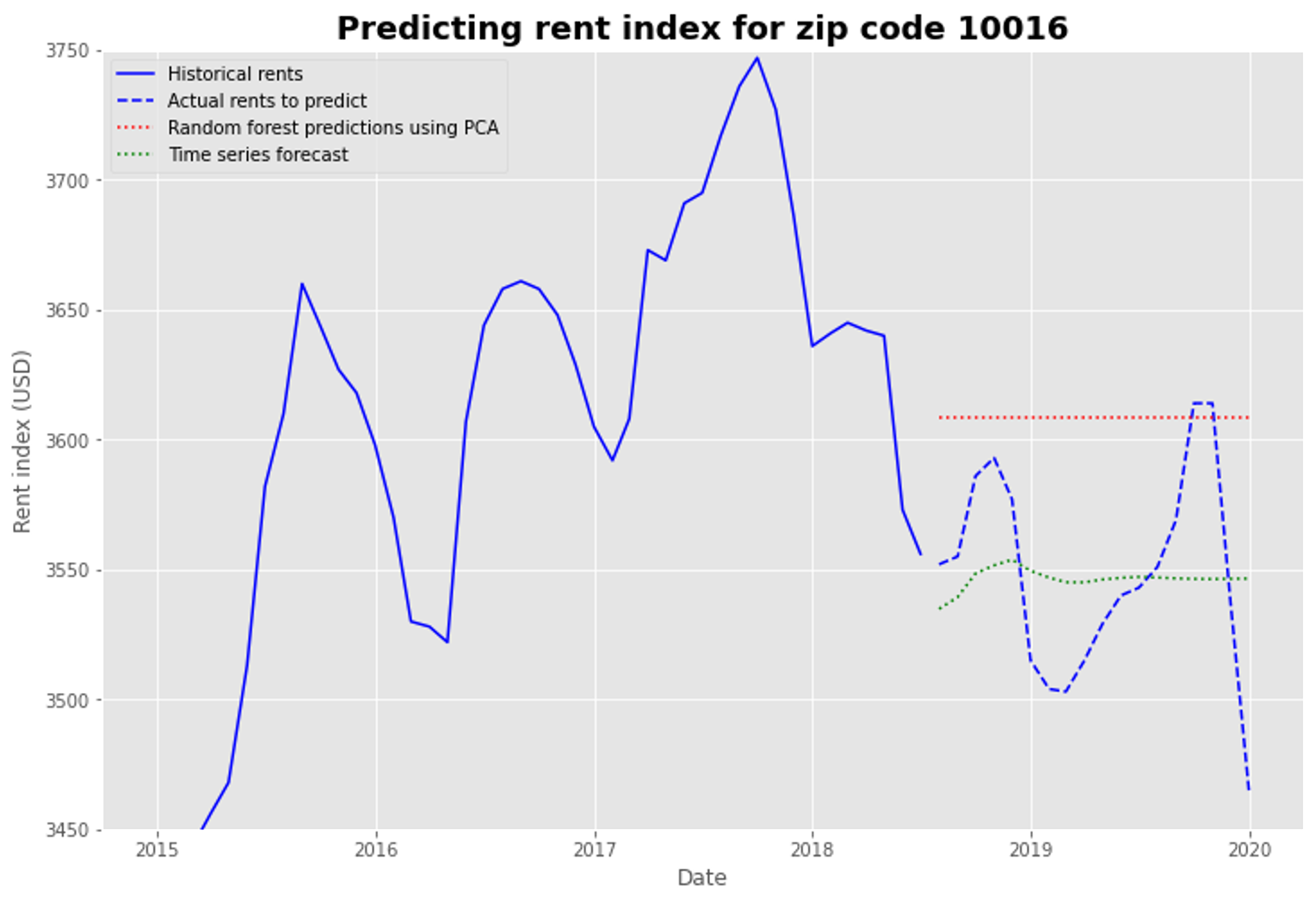 For our Manhattan zip code, the ARIMA model produced the smallest prediction error ($38.47) followed by our Random Forest using PCA features ($51.70). The Random Forest predictions for all seventeen months were constant. We believe this was because the most important features in the most were derived by the census data. Since the census bureau only releases its data annually, there were not enough month-to-month changes for the model to generate different predictions. In our next steps, we would like to explore other features with granularity at the monthly and zip code levels.

After spending over six years working in academic research, I am transitioning into the exciting world of data science. When I am not trying to unveil new data-driven insights, I enjoy traveling, exercise, and spending time with friends...
View all posts by Douglas Pizac >