Link to the online interactive application.

​​​​Netflix has had incredible growth over the last decade, both in terms of the number of subscribers and in terms of revenue generated. The company has demonstrated an ability to exceeded even the most ambitious revenue and subscribers projections time and time again.

As of the end of 2019, Netflix is valued at more than $150 billion and has more than 167 million paid subscribers worldwide.

Netflix is available for viewers to enjoy in 110 countries, with international subscribers fueling most of its impressive rise over the last several years.

But the question is, given all of this impressive 'bottom line' results, what is actually on Netflix? What kind of content do people enjoy so much that it allowed Netflix almost to double their revenue in just 3 years, and to demonstrate $20.15 billion revenue in 2019, with the number of paid subscribers continuing to grow despite a consistent increase in the price of subscription?​​​

​​Does Netflix have more TV shows or Movies? Is there more mature or kids-friendly content? How 'old' is the content on Netflix? Are there more documentaries or comedies, thrillers or actions, stand-ups or dramas? What actors do we see more often on Netflix? Is the average length of a movie gradually increases as consumers have more and more opportunities to enjoy them in the comfort of their home?

Research is mainly based on the dataset obtained from kaggle.com, which in turn is primarily based on the data collected from the website flixable.com that allows users to browse all the TV Shows and Movies currently available to stream on Netflix in the United States. The dataset contains information gathered in December of 2019 and keeps being updated. Data includes information on the title's name, type (show or movie), director, cast, countries involved in the production, date of availability on Netflix, original release year, rating (MPAA or TV Parental Guidelines), duration, genre, and a brief description of the title.

After being cleaned, restructured and reformatted, the original dataset has been merged with the data on the number of subscribers that Netflix has had at the moment of the title being added to the Netflix streaming library.

Owing to the fact that the majority of the non-original titles on Netflix are being deleted from the resource on a regular basis, the actual share of the content available fro streaming that was added 5 or more years ago is considerably small. Therefore, the decision was made to group all the content added in 2015 and prior, into a single group, in order to give it an increased significance, thus visibility in the future analysis.

The online-accessible interactive app was created using the Shiny Tools Package in R.  The app itself consists of the six main categories (tabs), that visualize various aspects of the analyzed data, as well as two additional tabs where the clean data can be accessed, and the brief description of the research can be viewed.

The introduction page consists of a brief overview of some of the general facts regarding Netflix, in addition to the graph illustrating the 'title addition dynamics' reflecting periods during which current titles arrived at Netflix. These graphs allow us to see the structure of content by year added, by month & year added, as well as a pattern of the average number of titles added per month for all the years combined. 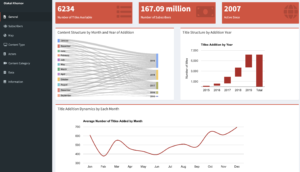 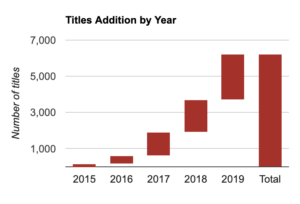 The next tab contains an overview of the information on the number of subscribers on Netflix, as well as the dynamics of subscribers base's growth and its correlation with the number of titles added. The bottom of the page contains the graph, which illustrates the variations in the average age of the content being added to Netflix for each month of the last 5 years. 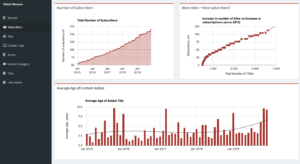 Unsurprisingly the number of subscribers has been growing steadily, passing 167 million paid subscribers in 2019. 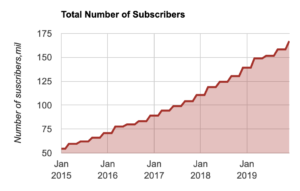 More than that, the average age of the added content has not shown any significant patterns over the last years, with only occasional increases in the age of Movies and TV Shows being added in the Fall-Winter holiday seasons.

The next tab hosts an interactive map, which shows the information on the number of titles with which each country has been involved. Users can select specific continents to take a closer look at and hover a cursor over a country to get an exact number of titles for it. 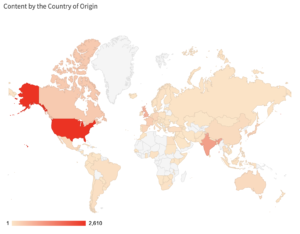 Just like most of the users expected, the country with most titles is the United States, which has been involved in 36.4% of all the titles available on Netflix. The second most-involved country is India, which surpassed both the UK and Canada in the number of titles produced that can be streamed on Netflix. However, results may not seem as much of a surprise, given India's massive population and a booming moviemaking industry.

The following section demonstrates the structure of the content by type - Movie vs. TV show, as well as the dynamics of the proportion of movies and tv shows added over the last five years. The final graph on the page shows an interesting dynamics of the increase in the average length of the movie being added to Netflix. 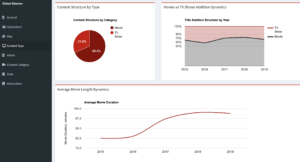 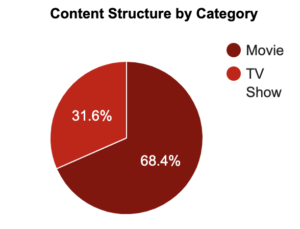 More than that, we can observe an intriguing uptick in the percentage of movies as a share of the total content added happening in 2017. While in 2016, 57.9% of all the content added were movies, in 2017 this number rose to 70.2%. 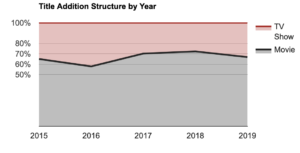 Both of the upticks taking place during the same year clearly demonstrate a certain shift in strategy towards the addition of more and of longer movies. A relationship that might be studied deeper with more information available.

This section contains a list of actors that appear most frequently in Netflix titles. 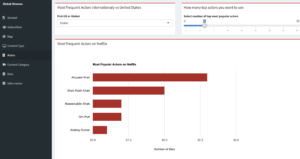 By far, the most popular actors on Netflix globally are Asian and, in particular, Indian.

Out of 10 most popular actors on Netflix, 8 are from India, and 2 are from Japan. Having so many Indian actors appearing so often on Netflix is understandable at this stage, as we have observed previously in our analysis that India is the world's second-largest Netflix content producer. 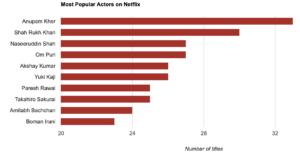 The final section uncovers the structure of content by genre and age rating. 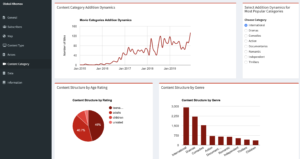 In terms of age rating, Netflix offers plenty of content for its main age groups. Most of the content on Netflix is suitable for teenagers (13-14 and above), which constitutes 46% of all the content available on Netflix. However, most of the adults will also find plenty of content, which is suitable only for them, and it not advised for anyone in children or teenagers age groups. This type of content makes up 40.7% of all titles. 'Suitable for children' corresponds to only 9.5% of all available content.

This insight into the structure of the content helps us understand what kind of age groups are most valuable to Netflix in terms of revenue generation. 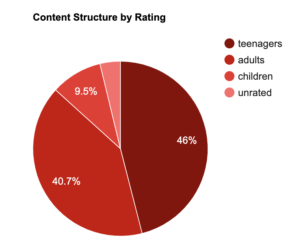 In the end, we can notice that the most popular genre on Netflix is 'International', with 47% of the content falling in that category. This should not come as a surprise since we have already discerned that 63% of all the content is being produced without the involvement of the United States. Other most popular genres include Dramas (35%), Comedies (25%), Actions (11.6%) and Documentaries (10.7%). 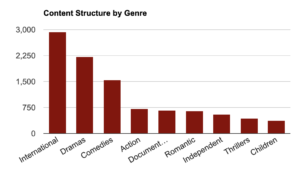 Due to the nature of the data set and due to the limited scope of the research, a certain amount of meaningful questions could not have been answered. With broader access to data, a number of additional valuable insights can be generated. Some of the issues worth exploring may include:

Thank you for your interest and time that you've devoted to reading my blog post. You can access the app following this link and explore the data on your own. In addition, feel free to 'toggle' some of the data input options in order to receive more focused insights and visualizations on the issue that catches your interest. Please feel free to reach me out via my LinkedIn page and provide feedback or ask any questions that you may have.