New York City Psychotherapists: Who Are They?

New York might be the city with the highest number of psychotherapists in the world. There are many mental health professionals to choose from, but it is  difficult to find the information on them as a group: what and where they studied, how much, on average, they charge per session, what health insurance plans they accept, and what their areas of specialty are. Probably, that's the case because psychotherapy is a very individualistic profession. It's possible to find information about an individual therapist, but there is little information on psychotherapists as a group.

To address this issue I decided to collect information about New York City therapists using Web Scraping. More specifically, I did web scraping of Psychology Today's "Find a Therapist" website.  This site is a well-known platform used by New York psychotherapists to advertise their services. An individual therapist pays Psychology Today a monthly membership fee and Psychology Today includes his/her profile on its website. A potential patient goes to the site, enters the zip code, and finds all therapists who practice in or near that zip code. Then, the future patient can study profiles of different therapists, find one she likes best, and contact the therapist to schedule a session.

Because it is a self-promotion platform, many therapists provide useful information about themselves, like their degrees, universities they graduated from, their license number, session fees, insurances they accept, their areas of focus and specialties, preferred therapeutic approaches etc.

I web-scraped all New York city zip codes using Python 3's Beautiful Soup on October 17-19, 2017. Then, I merged this information with some additional information collected from US Census Bureau: each zip code's median income and number of households. This reduced somewhat the size of my data set because I could not find income/population size information for some of the zip codes I scraped. I ended up with information on 12,629 psychotherapists from 168 New York City zip codes.

I cleaned the web scraped data using R. Some of the information therapists provided was standardized, but some of it was collected via therapists' write-ins. As a result, there was quite a lot of data cleaning to do. Below is what I found out about New York City (NYC) psychotherapists who self-advertise on Psychology Today's website.

What degrees do NYC therapists have? 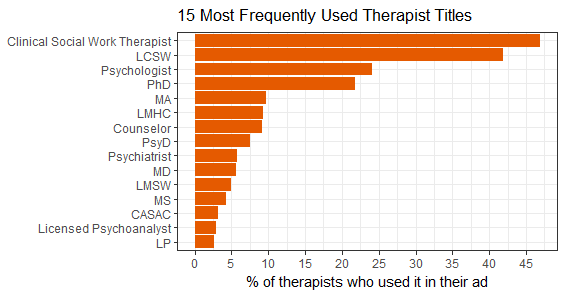 What universities did NYC therapists graduate from? 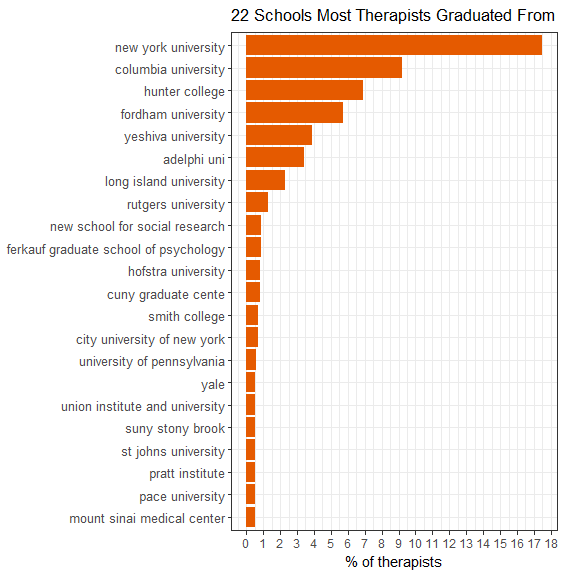 When did they graduate? 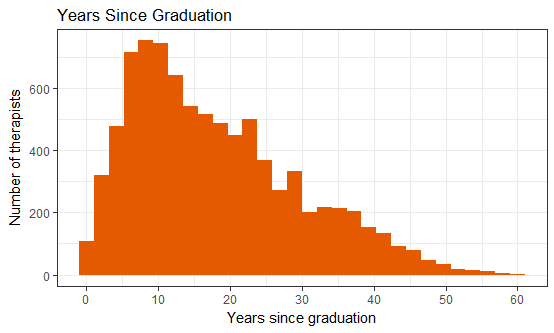 Here I should probably mentioned that in order to practice psychotherapy in New York State, you are required by law to have a license issued by the state. However, 1.9% of NYC therapists from Psychology Today listed licenses from other states! And 3% listed no license at all! Are almost 5% of those listed breaking the law? The graph below shows in what states therapists with out-of-state licenses were licensed: 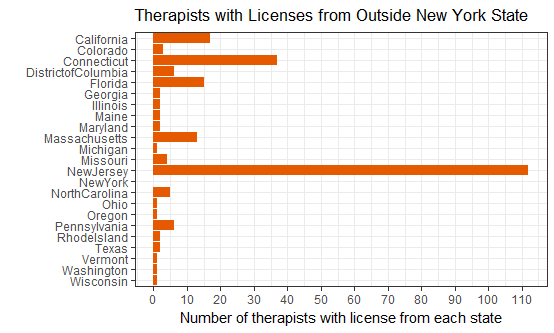 As expected, most of them are from the states around NYC - NJ and Connecticut. But there are some from as far away as California!

Many (not all) indicated their "average session cost" ("from $X to $Y"). On average, this range was $135 to $199. The maximum session cost listed was $500. The minimum was $20. 80% of therapists said they were willing to use the sliding scale (i.e., allow some patients to pay less given special circumstances).

Of course, not all patients are able to pay the full amount out of their own pockets.  Most therapists (71%) said they were accepting insurance. However, once you take a closer look at what insurance plans they say they are actually accepting, you find that many list just one: "Out-of-network". This means: I charge what I charge and give you a bill - you take it to your insurance and try to get money out of them, good luck! In other words, the therapist doesn't have a contract with any insurance (and thus, is not bound by its rates). I calculated the percentage of therapists who listed at least one health insurance that wasn't "out-of-network". I found that only 50% of therapists accepted at least one "real" insurance plan. In other words, 71% of NYC therapists say they accept insurance, but in reality only 50% do.

What are the most widely accepted insurance plans? Below are the top 15 (and 1199 is not a typo - it's a real insurance plan). Insurance names are not capitalized due to the data cleaning process: 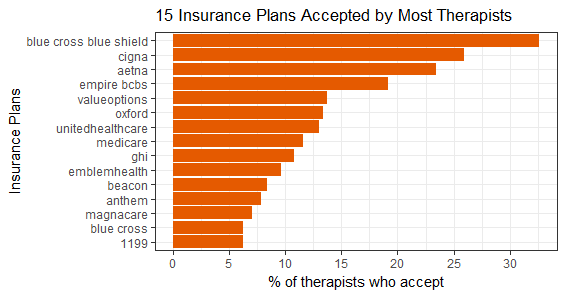 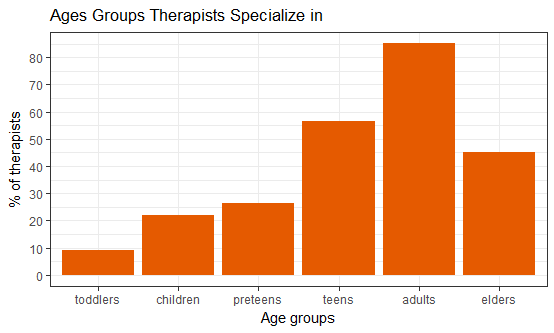 And here are special population groups therapists say they are interested in treating: 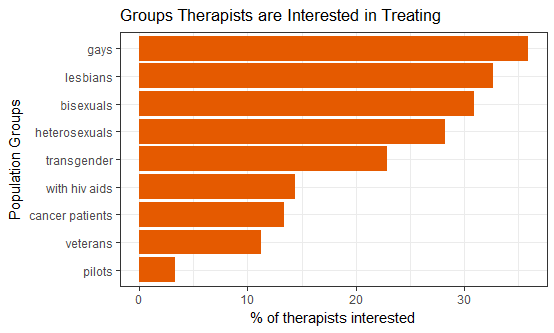 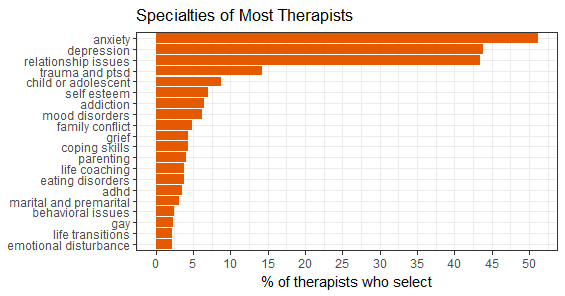 As we can see, the "usual suspects" top the list - anxiety, depression, relationship issues. It's also interesting to see how "life coaching" has crawled up  the list to spot 13. Life Coaching is not a psychotherapy specialty at all and is frequently practiced by people who are not psychotherapists. In fact, among therapists without a New York state license a higher percentage (19%) lists Life Coaching as their specialty vs. 3% among those with a valid New York state license: 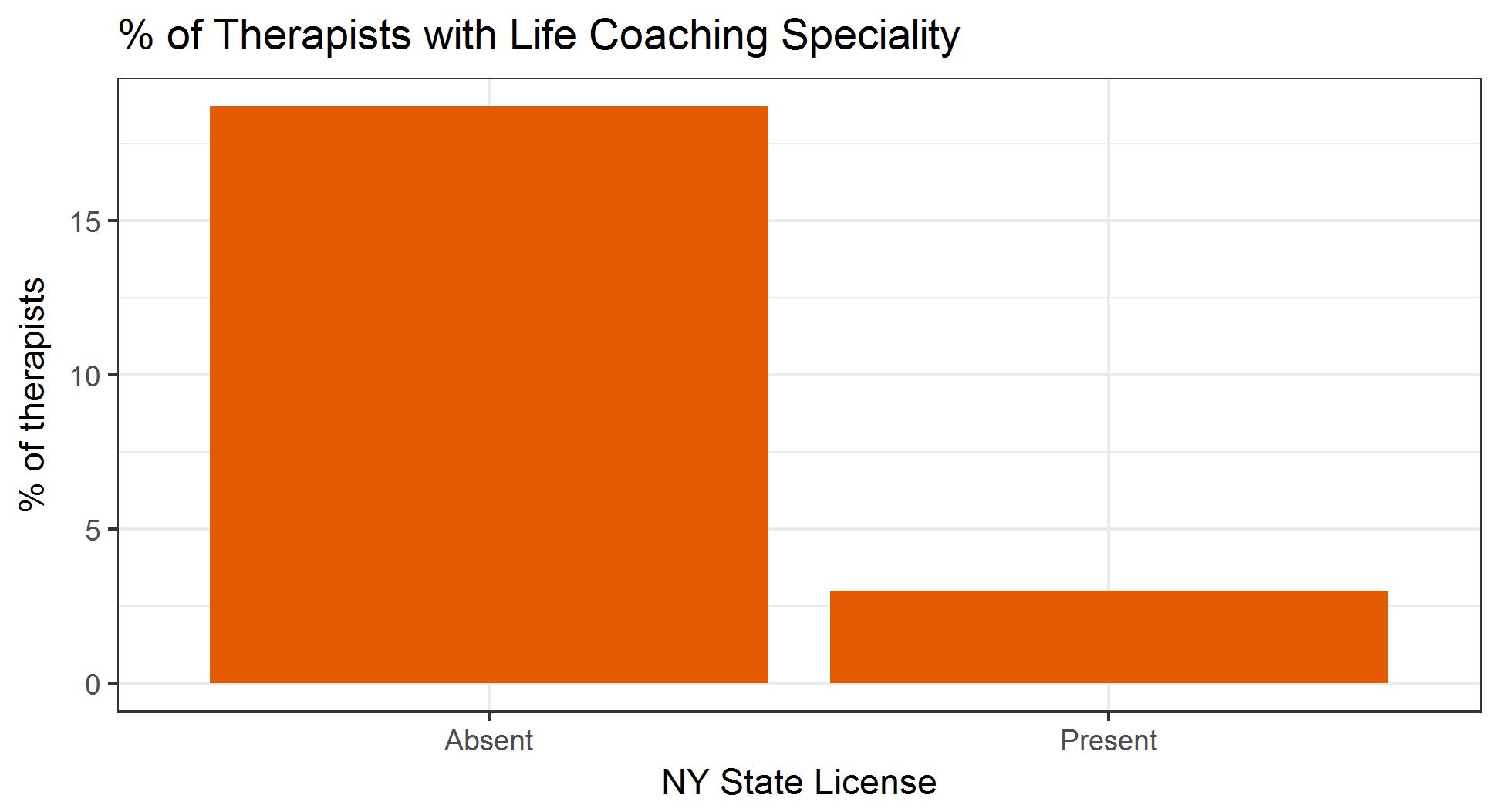 It's also interesting to look at the less popular areas of specialty. Below are the bottom 20 from the overall list of top 68 specialties I focused on: 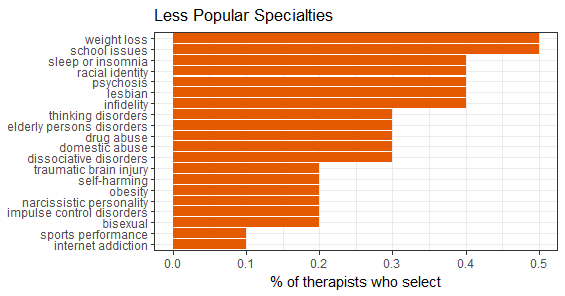 I wonder where 'internet addiction' will be in a few years... 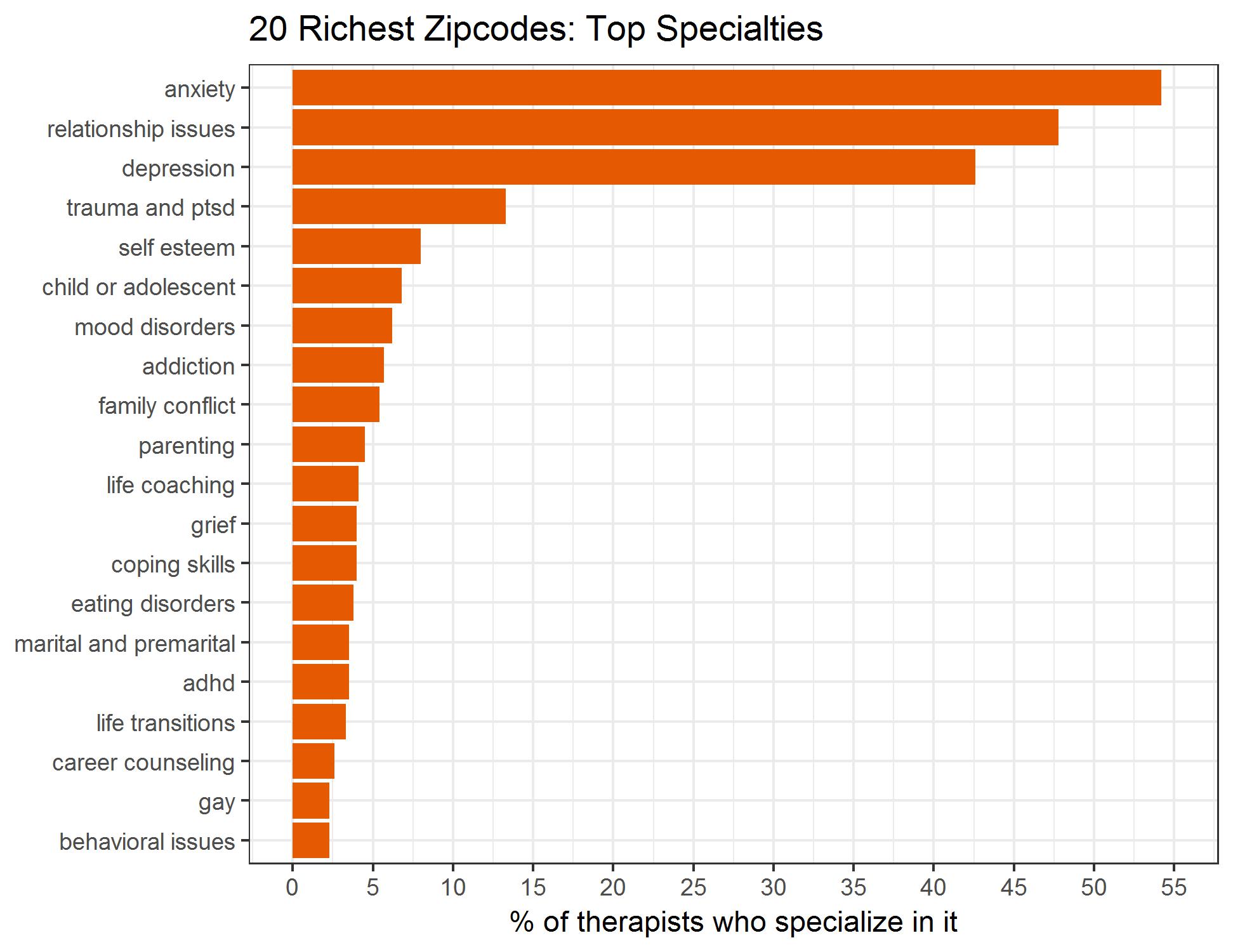 And here are the most popular specialty areas in bottom 23 median income zip codes (median income < $35,000): 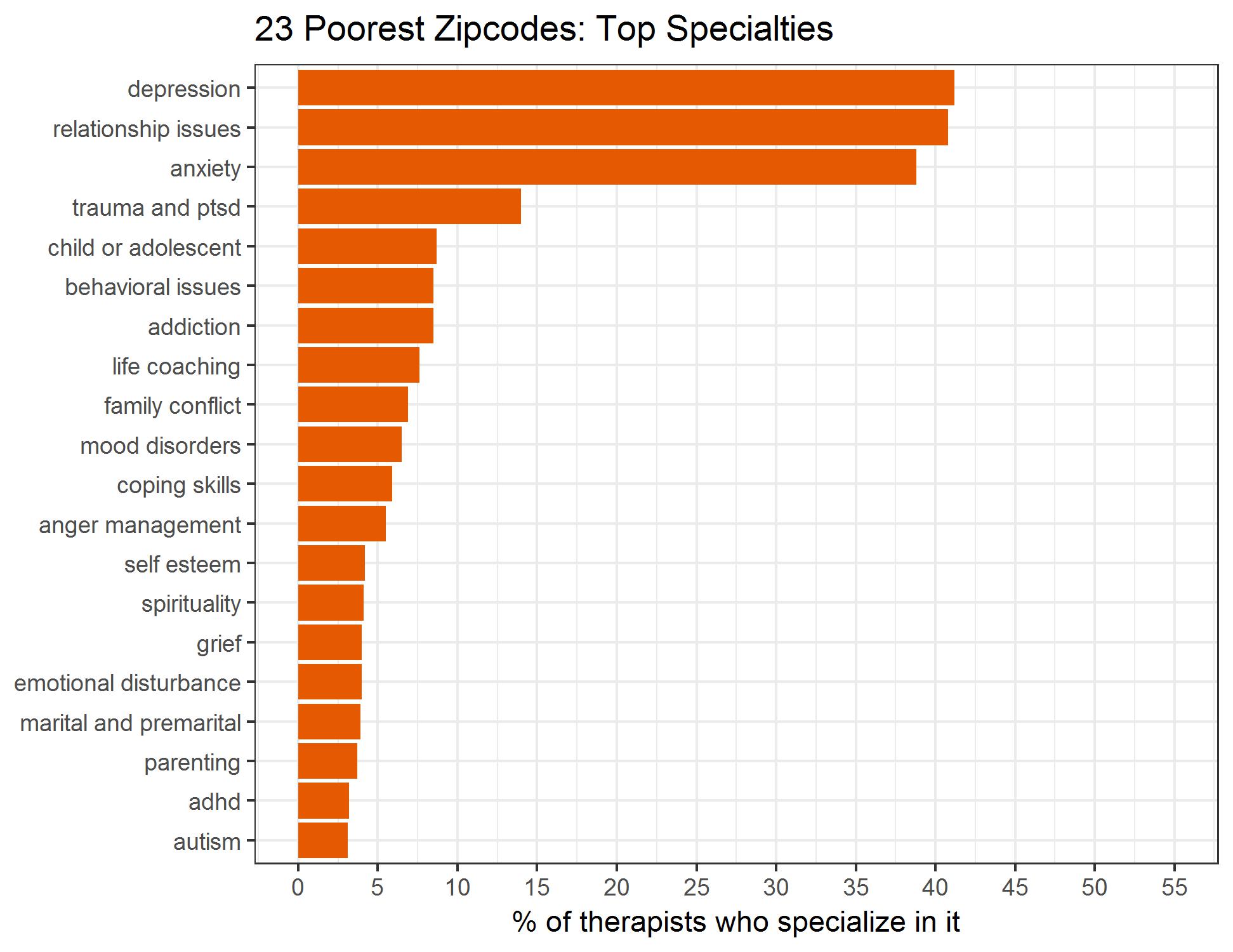 Let's now look at the top 20 issues therapists say they specialize in (each therapist could check several): 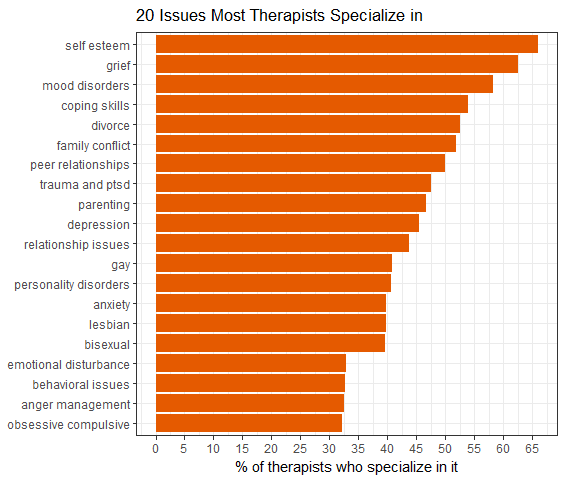 One should probably clarify that 'gay', 'lesbian', and 'bisexual' are listed by Psychology Today as 'issues' not because it's still considered wrong being gay/lesbian/bisexual but because some psychotherapists feel they are more experienced with/qualified in dealing with issues specific to LGBT+ patients. 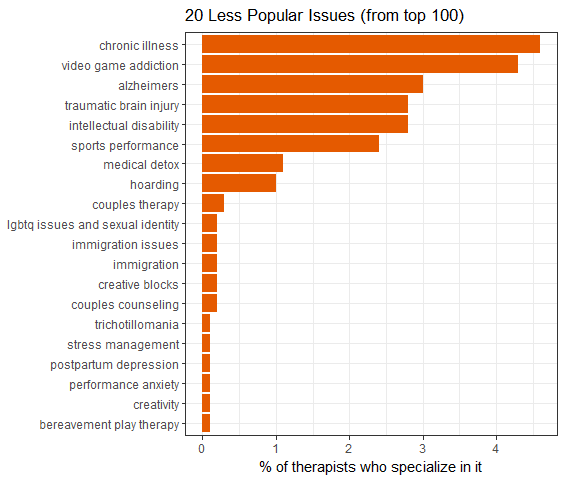 Some of the issues among the bottom 20 are surprising: many women suffer from postpartum depression, and most of us suffer from stress, but only few therapists say they specialize in those issues.

Now, let's take a look at the preferred therapeutic approaches. Each therapists could list several. I focused on top 38 approaches in total. Below are the most popular 15: 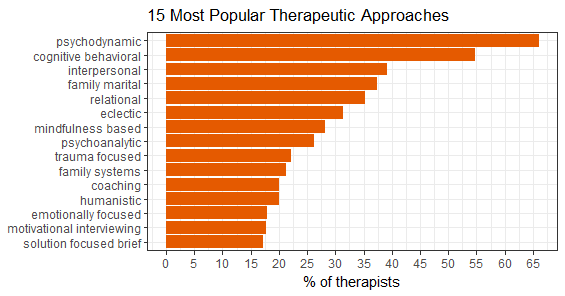 It is very interesting to see how over 65% of NYC therapists listed on Psychology Today say they use psychodynamic approach (and ~27% list Psychoanalysis!). That's New York for you! You'll probably never find such a high representation of psychodynamic approach anywhere else in the US. And again: "Coaching," which is not a psychotherapeutic approach at all, makes the top 15 list!

The next chart shows the bottom 15 approaches (out of the top 38) - which are also interesting : 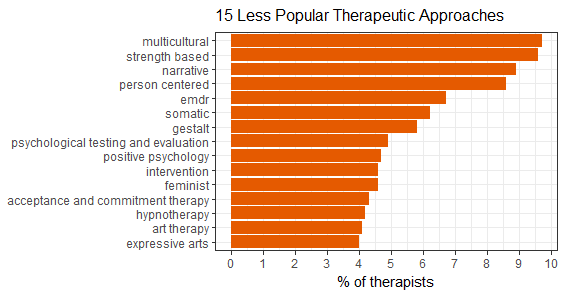 Curious to see that only few therapist use EMDR, a highly effective trauma-treatment!

Where in NYC are most psychotherapists? 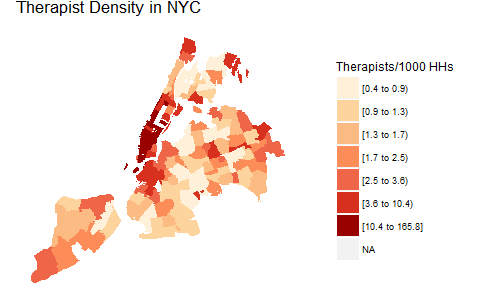 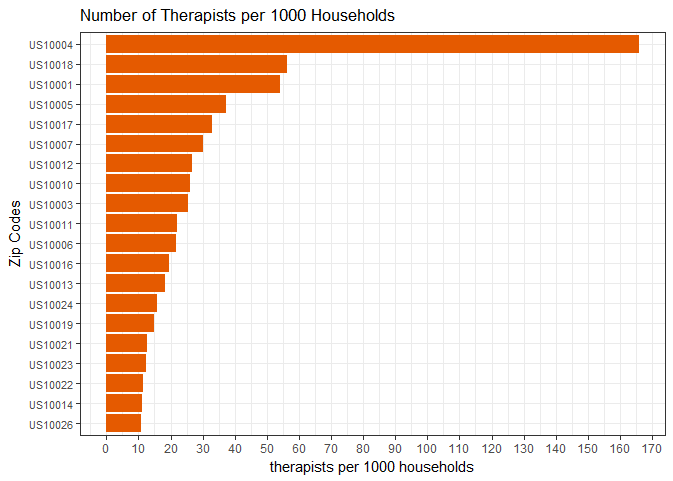 These 10 zip codes have very low therapist density (note - I was unable to find the number of households for certain zip codes, so that some zip codes might be missing from my analysis). As expected, they are in the poorest sections of the city. 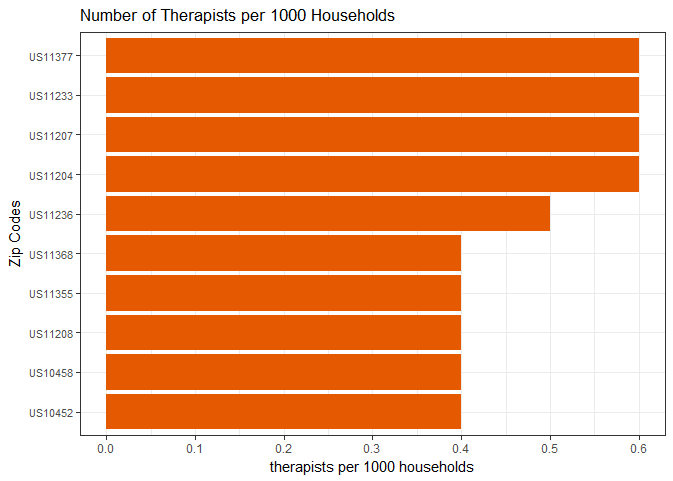 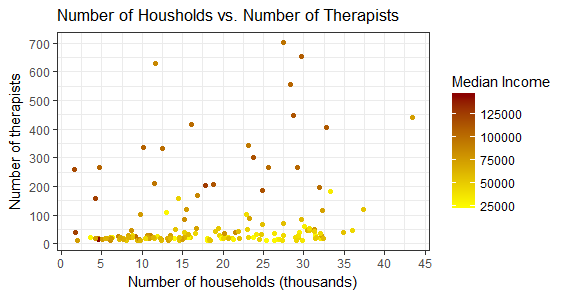 The next scatter plot confirms that income matters more than mere population size. Correlation between zips' median income and number of therapists is higher - it's 0.48 (and if both axes are logged it becomes 0.51): 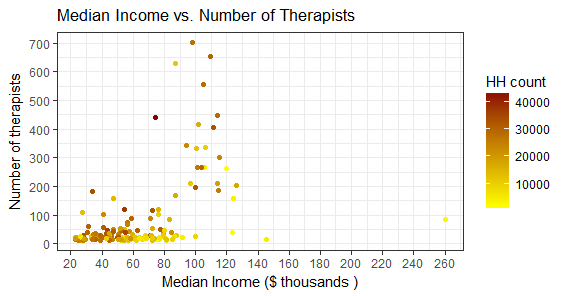 Because both income and population size seem to matter, I calculated a proxy for "total zip income" - the number of households multiplied by the median income. As expected, its correlation with the number of therapists was even higher: 0.63. The scatter plot below demonstrates this relationship: 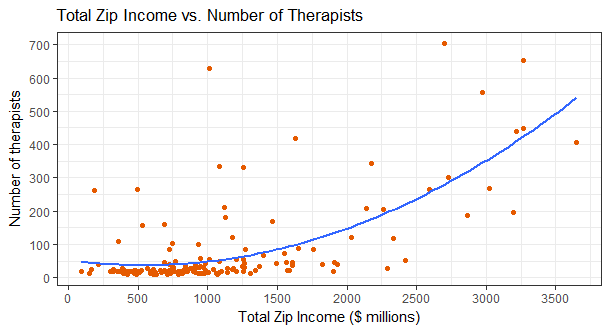 Finally, is median income related to the average session fee? It is. I correlated the "bottom" end of the "from-to" range for the session fee and median income. The correlation is 0.44. Overall, the higher the median income in a zip code the more psychotherapists there charge per session: 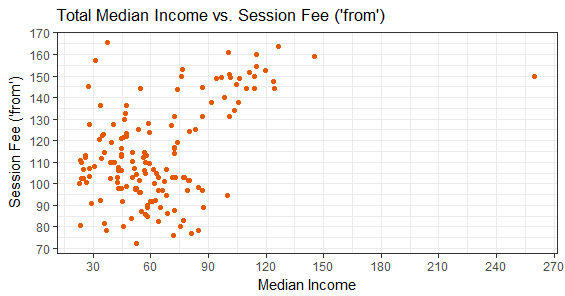 My analysis leads to further research questions. For example, the number of therapists per zip code might be related to the number of people working there. Many therapists might open offices where many people work to be in a more convenient location for more perspective patients. For example, Zip Code 10004 has by far the highest therapist density. It covers the southern-most tip of Manhattan and Governor's Island. Not too many people live there but quite a few work there. The same is true for mid-town Manhattan. This is something worth looking into.

Another interesting topic is: how do therapists' specialties, approaches, issues they are interested in cluster? Any interesting groupings there?

Finally, a practical implication of the data I collected: Psychotherapists considering opening a practice in a specific zip code could gain valuable insights that would help them differentiate themselves from competitors.