THE NFL’s “GAME WITHIN THE GAME”

On the heels of the 2019 NFL Draft, the popularity of the National Football League seems to have no bounds. Audiences continue to consume NFL content in absurd numbers, and many fans find tremendous enjoyment in predicting their favorite team's scores and stats. For decades, sports speculators have been placing bets in Las Vegas or Atlantic City, and a 2018 Supreme Court ruling will likely pave the way for nationwide sports gambling legalization.

Currently however, the most popular method of football prediction is fantasy football, the NFL’s “game within the game.” Here, players compete to set the best lineup of NFL stars, which are then scored based on their chosen players’ on-field productivity, by counting stats such as catches, yards and touchdowns.

With the advent of “Daily Fantasy Sports” in the 2010s, the ability to correctly predict NFL statistics became even more lucrative. As online venues began featuring tournaments with thousands of participants, competing for millions of dollars in cash prizes, bettors began to find themself entrenched in an information "war" - even while predicting a game as chaotic and random as football, competitors with the most, and best, data, often won.

As the number of competitors in these tournaments increased, so did the businesses catering to these individuals. Dozens of premium recommendation services and Fantasy Sports Gurus flooded the market, adding an additional layer of noise participants needed to sift-through before finding actionable information.

But through that noise also emerged a litany of legitimate research. Savvy analysts began employing statistically rigorous methods to derive metrics that helped predict NFL success on a week-to-week scale. Fantasy analytics sites such as RotoViz.com and PlayerProfiler.com gained a cult following of “NFL nerds” who found solace in understanding the underlying principles of standout NFL performance.

Each miniature revelation flew in the face of the tape-grinders' (as film-focused football scouts lovingly refer to themselves) longstanding notion that the best way to determine future NFL production was to study vast amounts of player film for nuanced, domain and situation-specific proficiencies, called 'talent,' that couldn't possibly be explained or measured.

In a reactionary move, a class of "metrics heads" has emerged on platforms like Twitter, where users fiend for more and more information, without questioning the data's accuracy or efficacy. In just the last 36 months, a slew of new, data-driven, interactive football content has once again re-complicated the NFL analysis sphere.

But splashy has replaced simple. Superfluous statistics are abound. I decided what was most needed was a way to help competitors cut through the noise by building a tool of my own, one that solely focused on the most predictive metrics for teams and players, with the goal of helping myself and others improve their decision making in NFL speculation games and fantasy football.

I used data from the nflscrapR-Data repository on GitHub. This is a reformatted version of the play-by-play stats publicly available on NFL.com from 2009 through 2018. It includes over 250 unique variables per play from the past 2,560 regular season games, amounting to over 50 Million observations related to the last decade of NFL regulation play.

Finally, the dataset includes a roster dataset, limited to teams’ quarterbacks (QB) and the three football “skill positions”: running backs (RB), wide receivers (WR), and tight ends (TE). These four positions are often collectively referred to as the fantasy-relevant positions, as they are the only positions used in fantasy football. The limitation of the roster data indicated that fantasy football might be a great first use case for this information.

Using R and the Shiny package, I built an app with the goal of a) distilling play-by-play data into actionable player-level and team-level insights, and b) serving as a contextual companion when re-watching or studying a game. For the included player-level research, I relied heavily on previous research and domain knowledge2, so that the player-level aggregations would only focus on advanced metrics that have been shown to have more predictive power than raw productivity stats (such as Yards Gained, Touchdowns, Catches, etc).

Additionally, because there are often situations where NFL players are either not playing or not available due to competition-specific restrictions, I recognized the necessity of filtering players from all comparative analysis pages. These filters are constantly available in the sidebar. 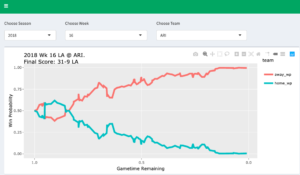 The Game Rewind page displays each Team's Win Probability at each particular moment of the game.

The Game Rewind page is most helpful when used alongside footage of an NFL game. Users can choose any team’s game dating back to Week 1 of the 2009 regular season, and easily visualize the most meaningful plays in the game’s outcome by observing each team’s change in Win Probability as the game moves towards its conclusion. Hovering the mouse over the graph at any moment on the timeline, users can also read a description of the play’s result. 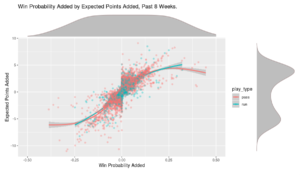 In the Leaguewide Trend Explorer, the user is able to perform basic league-level analysis, including the ability to visualize the impact that different play types have in determining a team’s Win Probability and Expected Points. It includes additional graphs to see how effective the league as a whole has been at running vs. passing over the user defined timeframe. 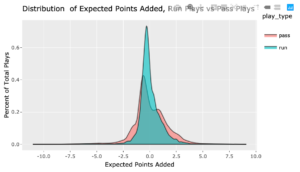 Observing the distribution of Expected Points Added for Runs versus Passes over last 8 weeks of the 2018 season, the average passing play has seen more volatile results, but carried more upside than the typical running play. If you want exactly 0 Expected Points, though, running the ball is a fantastic choice.

Punting is.. not a great decision if you like scoring points.

On the Team Efficiency page, users observe team level per-play efficiency over a determined period of weeks in the past. The graphs default to observing the most recent half-season, and include multiple metrics that illustrate how each team has fared in both efficiency accumulated (by their offense) and efficiency allowed (by their defense).

The metrics include the aforementioned Expected Points Added (EPA) and Win Probability Added (WPA), a variant of Yards per Attempt (AYA) and a duo of Air Yards based efficiency metrics popularized by FiveThirtyEight’s Josh Hermsemeyer, Passing Air Conversion Ratio (PACR) and it’s variant, aPACR, which measures how often a yard thrown in the air is converted into yards gained, with specific multipliers given to especially positive or negative outcomes in the latter metric.3 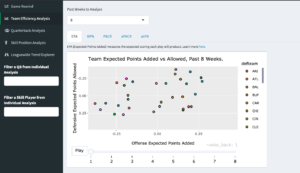 User's can view the movement of a team efficiency from week to week, or play an animation of all the weeks in a given timeframe. 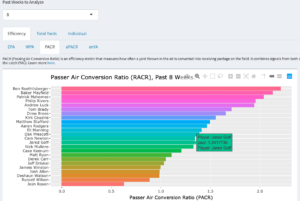 The first of two player-level analysis pages focuses strictly on the quarterbacks (QB) and purposefully ignores raw opportunity. 4 With the exception of the “Total Yards" tab, the entirety of the focus of the Quarterback Analysis page is on per-play efficiency, rather than opportunity or raw production. The same five metrics as the team efficiency tab (EPA, WPA, PACR, aPACR, and AYA) are once again available to the user, as is the ability to change the amount of weeks in the past to aggregate the data. 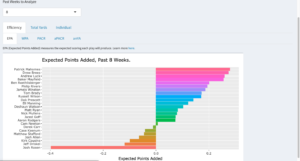 Unsurprisingly, the player who led all QBs in EPA-based efficiency was also voted the NFL's Most Valuable Player, receiving 41/50 1st place votes. The other nine... went to Drew Brees, second on this list.

Contrary to quarterbacks, the Skill Position Analysis page provides an additional tab: Opportunity. Only after determining the value of a skill player’s opportunity can their efficiency be properly contextualized when predicting productivity. 5 The most important overall statistic for skill players is the percentage of team plays in which they are chosen to receive the ball: 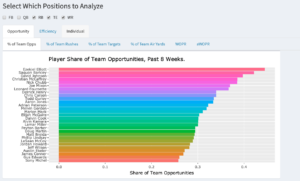 As with previous efficiency tabs, the opportunity metrics are those that have been proven more predictive than raw counting stats (such as rushes, pass targets, or catches), and are presented as percentages of the team’s overall opportunities: 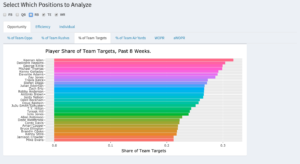 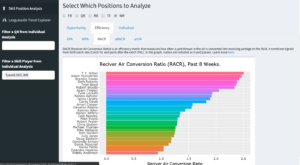 Users can see the players with the most opportunity, and those who've been most efficient with their opportunity, using a variety of metrics.

Within both the Quarterback Analysis and Skill Position Analysis Pages are additional tabs labelled “Individual.” On this page, users can observe a player’s efficiency on a per-play basis, as well as a trendline of that player’s efficiency compared to league average. Hovering the mouse over each plot provides game information and the description for that particular play. This can be extremely helpful in determining if there are certain areas of the field, further or closer to the play’s origin, called the line of scrimmage, where that player is particularly successful. 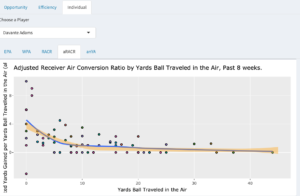 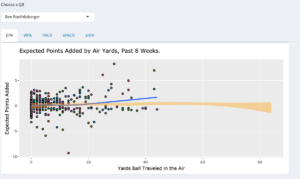 Users can observe a quarterback or skill player's play-level efficiency vs. league average in a variety of metrics.

I’m thrilled to be releasing version 1.0 of NFL-Dashboard to the public, but that’s exactly what this tool is: a first-pass at aggregating this data effectively. In the future I’d love to add much more data and functionality, while maintaining an interface simple enough to consistently gain actionable insight.

I can’t thank you enough for taking the time to check out this project. It was an incredibly rewarding experience to try and wrangle this much information into a useful, valuable tool. If you have anything you want more information on, or if you see a big error (hopefully none of those!) don’t hesitate to reach out! You can also check out the source code for the application at my GitHub page.

Matt Savoca is a sports-obsessed researcher and content producer who lives in New York City. After completing a foundational coursework in statistics and data science in both R and Python, he spends his days parsing, scraping, visualizing, and...
View all posts by Matt Savoca >