Contributed by Michael Todisco. He is currently in the NYC Data Science Academy 12 week full time Data Science Bootcamp program taking place between January 11th to April 1st, 2016. This post is based on his first class project - R visualization (due on the 2th week of the program).

The NFL Scouting Combine is a week-long showcase where potential NFL players are put through several athletic tests.  How a player performs at the combine could impact his draft position.  My objective was to graphically visualize and inspect player combine performance.  The questions I was interest in exploring were:

Some of the code is posted below, but it can be found in its entirety here: https://github.com/nycdatasci/bootcamp004_project/blob/master/Project1-ExploreVis/Project1-michaeltodisco/NFL_Combine.R

I was able to find a relatively clean dataset from NFLsavant.com.  It contained recorded combine results from 1999 to 2015 and had fields such as; player name,position, year they attended the combine, college they went to, the pick they were selected in the draft, and their work-out performances.  I downloaded the data and read it into R studio while wrapping it in a dplyr data frame.

How Are The Work-Out Results Related?

I performed a few of these visualizations, but the one below shows a player's vertical jump in inches on the x-axis and the number of repetitions they performed in the bench press on the y-axis.  I was hoping to see some type of a relationship between the two variables.  My initial thought was  that a player who benches a lot and is strong will no be likely to jump high.  You can see from the "clouded" data that there really isn't a general relationship here.  The one thing that is apparent is the clustering by position (colored).  Defensive backs, in red, have a higher vertical, but lower bench press, as compared to offensive lineman. 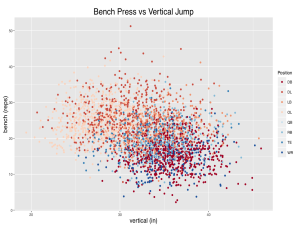 Where Do The Players Come From?

In my original dataset, I had the college a player attended.  However, I was not able to map the data with just the college name.  I need the state of the college as well.

To remedy this issue, I found another dataset which was a list of U.S. accredited colleges.  This dataset contained the state information that I was looking for.  I read the new data into R and merged it with my original combine data.  With the merged dataset, I was able to use the maps library to plot the number of players that attended the combine by state.

Not surprisingly, the states with the highest frequency of players came from Florida, Texas and California.  Not only do these states have the largest populations in the U.S. but they are also "hot beds" for football talent.

When looking at the number of players by the university they attended, I was surprised to see that the University of Georgia took the top spot.  Many of College Football's power-house programs such as Florida, Alabama, USC and LSU also made the top 10 list. 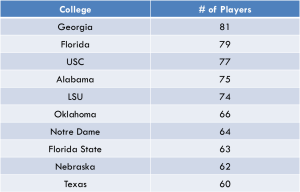 How Are NFL Draft Picks Trending?

The next question I wanted to investigate involved the NFL Draft, particularly the first round.  I wanted to see who was being more highly valued by NFL teams; offensive or defensive players. 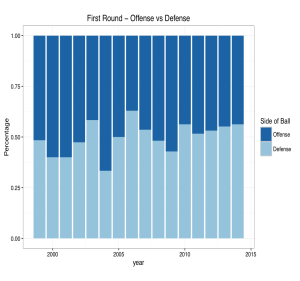 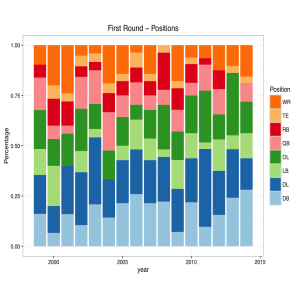 Its interesting here to note that a running back (red) has not been drafted in the first round in the last two years.  Consequently, defensive backs (light blue) have seen steady increases in there position being drafted for the last five years.  This trend makes a statement about the way the game is currently being played.  With completion percentage going up, teams have abandoned the running game and are more focused on throwing the ball.  Thus, RB values have been diminished and those defending the pass, DB's, have increased.

What are the Best and Worst 40 Yard Dash Times?

With a limited amount of time, I decided to focus the majority of my attention on one test:  the forty yard dash.  This is by far the most popular test and the one that makes the most headlines.  You can see from the tables below that forty yard dash is largely segmented by a player's position.  The skill position players typically have much quicker forty times than offensive or defensive lineman. 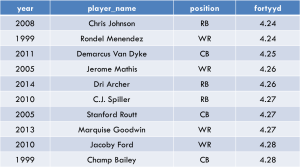 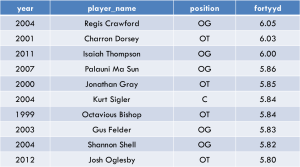 How Have 40 Yard Dash Times Been Trending?

It has been a sentiment seen by many, that NFL players have been getting bigger, stronger and faster.  The graph below would certainly make the case that they are getting faster.  The average forty time has nearly dropped by 0.07 seconds in the last fifteen years.  This may seem like a n extremely small amount, but it is quite meaningful when considering that the range of the full scale is only about 1 second. 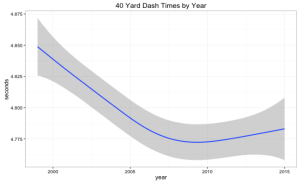 How Do 40 Yard Dash Times Differ By Position? 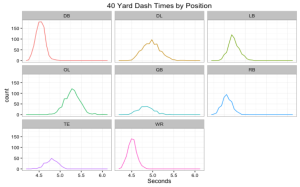 Below is a density plot for offensive players, further showing the different distributions by position. 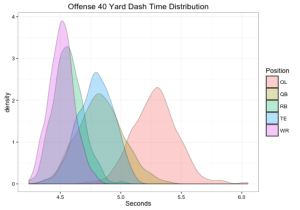 And here is the same plot but for defensive players. 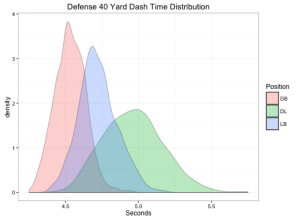 How Do 40 Yard Dash Time Rank By Position?

The box-plot below shows that Wide Receivers have run the fastest 40 yard dashes at the combine while offensive lineman have run the slowest. 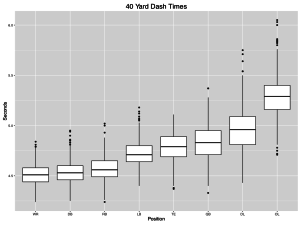 Does a Player's 40 Yard Dash Time Impact Where He is Drafted?

There is a linear shaped relationship between a running back's forty time and when he is selected in the draft.  The faster the 40 time, the lower the draft pick. 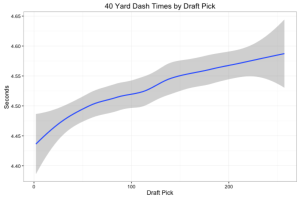 However, this is not true for a position like quarterback, which is sensical because the QB position is not predicated on speed, thus a QB's curve is much more horizontal than a RB's. 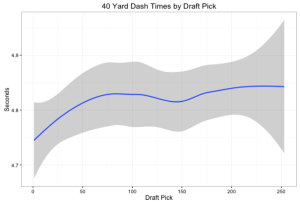 How Likely is a Player to be Drafted?

One of the most surprising things that I found while exploring this data was that over 34% of the players that attend the draft don't get drafted at all.  I had no idea that percentage was so high.

One of the big issues in sports news lately has been underclassmen declaring for the NFL draft and not being selected.  This is a big problem because once a player declares for the draft, they lose their college eligibility.  In 2014, 98 underclassmen declared for the draft, and 36 of them were not drafted.  Perhaps, if these players were more informed and knew their work-out times, they could have decided to stay in school. 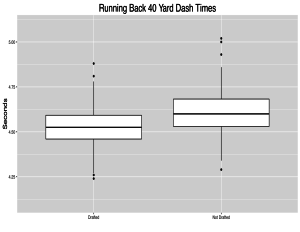