There are many resources for archiving incidents of "gun violence" that the media cites in news reports. However, there is a serious lack effort when it comes to tracking intimate partner violence (IPV) in the public domain. Unfortunately, because general gun violence archives  involve reports of incidents across the nation where definitions of relationships and crimes that involve them differ, they suffer from being too broad for serious Intimate Partner Violence Intervention (IPVI) research. Also, because we know that a large number of serious IPV offences involve violence without firearms, the focus on incidents involving guns leaves them out.. These issues make it difficult to know the the true scope of IPV offences. Therefore, our team was tasked with engineering a prototype for archiving serious IPV incidents that would allow for a robust analysis of IPV while circumventing the problems introduced by using more general gun violence archives.

We decided to use a cross-section of the Gun Violence Archive to get URLs for violent offences that involved "significant others". Because we needed an alternative class to IPV, we also pulled URLs for violent offences that did not involve "significant others." From this we received about 3,200 URLs to IPV news documents and about 3,200 URLs for non-IPV news documents.

Now faced with the task of needing to scrape thousands of different domains with different page instructors, we developed a naive scrapper that would scrape bulk text from these URLs and validate that it was news content. From this we were able to collect a data set of news documents, 2729  labeled as IPV and 2720 labeled as non-IPV. This allowed us to get the volume of data suitable for training a language model that can categorize articles as being related to an IPV offense in real-time.

We decided to utilize regularized logistic regression for the binary classification task at hand. We had enough data to run cross-validation and search for hyper-parameters that would help with reducing the variance with such a high-dimensional data set. This model slightly outperformed a multinational naive bayes model trained on CV.  The Logistic regression best model in the CV had a R² of .85.

With this model, we created a prototype application that can be used to automate the classification and archiving of IPV news articles. This was achieved by creating an interface of a news query API in Dash that will return information about an article including its URL. 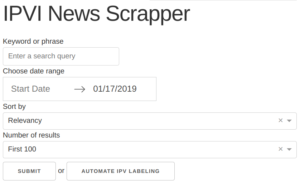 By using Dash as an interface, even a low technically skilled end user can search the web for potential IPV articles, and download them to be saved in the IPV archive. When the user has inputted a manual query, she is presented with all matches in the form a a data frame.

She can then manually save articles to the global IPV archive that will grab the text via the same naive scraper used to get our training documents.

This process can also be automated. The button labeled "Automate IPV Articles" activates the IPV classification model.. Once clicked, it will return a data frame of articles along with a prediction score for how confident it is in its predicted label. The model has a probability estimate of 97.5% that the following article is about IPV. 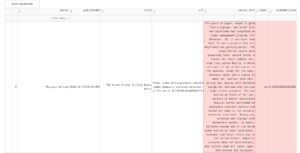 A full production version of this application could leverage additional models for more fine grained labeling and analysis. For instance, a member of our team created a model for labeling whether an the IPV incident is a repeat offence. Built into the archive is also the ability to scrape additional IPV articled from the Gun Violence Archive. So between keeping in sync with the Gun Violence Archive and the automated IPV search functionality, even the prototype archive has the potential to be a very robust resource for those analyzing intimate partner violence in the news.