How do NYC restaurant health inspection results vary by location and cuisine?

Contributed by Ho Fai Wong. He  is currently in the NYC Data Science Academy 12 week full time Data Science Bootcamp program taking place between April 11th to July 1st, 2016. This post is based on his first class project - R visualization (due on the 2nd week of the program).

NYC's Department of Health and Mental Hygiene (DOHMH) conducts unannounced inspections of restaurants at least once a year to check food handling, food temperature, personal hygiene and vermin control. Since 2010, NYC restaurants have to prominently post their Grade (e.g. A/B/C) which empowers diners with decision-making information and incentivizes establishments to improve their hygiene.

I was interested in how a restaurant's location and type of cuisine could affect its inspection results, in order to be a better-informed diner in New York City. For example, some of my initial questions were:

The data exploration and visualization was conducted in R. The code can be found on Github.

For this exploratory analysis, I used the NYC DOHMH Restaurant Inspection Results as of April 13, 2016, which contained inspection results from 2010 onwards.

The original data was in the form of a single table containing, at a high level, restaurants (incl. zipcode and cuisine), inspection dates and individual violations. Since I was more interested in restaurant grades, I removed the violation-related information and deduplicated the data to obtain unique inspections (~150k inspections i.e. rows covering ~25k restaurants).

The code below was used to load the data and perform some initial cleanup such as:

At this stage, 2 things are worth noting:

I created intermediate tables that were reused throughout the analysis

III. Grades and scores by location

Since most New Yorkers are more familiar with the letter grades, I started the data exploration by visualizing the number of restaurants by borough and by their latest grade in the bar plot below. A few observations could be made at this point: 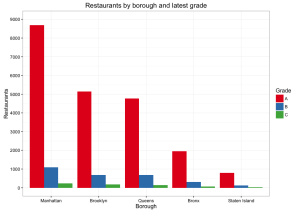 Since grades couldn't differentiate boroughs, I plotted restaurants by scores instead and used a density plot to account for the disparity in number of restaurants by borough. Immediately, a few points became apparent: 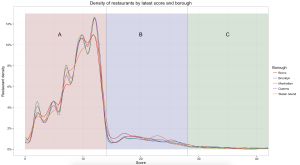 Since comparing grades and scores by borough didn't lead to any notable differentiation, I looked at the average scores by zipcode using the zip_choroplethr package. This view helped answer some of the initial questions I had (e.g. Flushing restaurants have a higher average score i.e. worse hygiene than UES) and could differentiate different neighborhoods, though most restaurant scores fell within the 9-12 range. 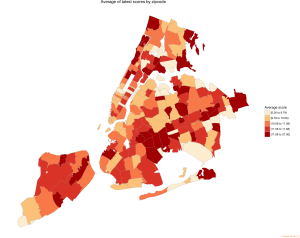 IV. What about inspection closures?

Scores don't actually tie directly to restaurant closures. For example, a restaurant could theoretically have only 1 violation with a total inspection score under 13 which would give it an A grade, but that violation could be a public health hazard leading to the restaurant's closure.

To explore inspection closures further, I defined the following ratios:

I first calculated the inspection and repeat closure ratios by borough: 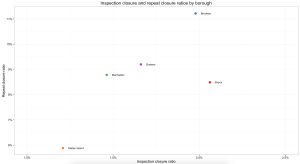 Similarly, I wanted to visualize the closure ratios by type of cuisine. The original data categorized restaurants into 84 cuisine types. For simplicity, I focused on the top 20 types which covered 80%+ of NYC restaurants and filtered down the data accordingly.

Once again, while most cuisines have average scores in the 9-12 range which would give them an A grade, the closure ratios differentiate cuisines. For example, Chinese restaurants have higher inspection closure ratios and repeat closure ratios than French and American restaurants as I initially hypothesized. Many more comparisons and observations can be made from this scatterplot depending on your selected cuisine type! 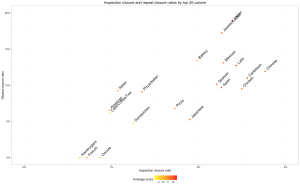 Closures by cuisine and borough

Finally, what if we combined both dimensions of location and cuisine? Intuitively, certain cuisines could fare better or worse in health inspections depending on the neighborhood. To illustrate this, I used faceted bar plots of inspection closure ratios by borough with refactored cuisine types to order by descending counts of restaurants. 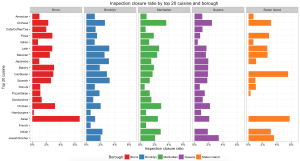