There’s a misconception that being good at crosswords and getting NYT crossword answers quickly requires knowledge of trivia, and it couldn't be more false. Sometimes a crossword constructor will resort to an obscure word just to get all the clues to fit, but trivia runs counter to the goal of the New York Times crossword, and puzzles with too many esoteric clues don't get printed. Let's collect data to see how to solve crossword puzzles.

“Zeitgeist” is a German word which means “spirit of the times”.  The zeitgeist is the opposite of trivia; it is the collection of cultural references that should be familiar to most people.

My project is about the second bullet point: trying to understand and visualize how the NYT crossword puzzle stays current and captures the spirit of the time in which it is published.

I scraped five years' of clue-answer pairs from the crossword blog xwordinfo.com using scrapy.  There was a minor issue where my spider would get redirected if I tried to grab too much data at a time, so I had to crawl in chunks. Ultimately I was able to get most of the data I wanted, and I believe that anything excluded is missing completely at random.

I also scraped all the words added to the OED over the past four years (about 3000 words), and the entire Urban Dictionary word of the day archive (about 4000 words).  Lastly, I obtained a list of the 5000 most common English words from the Corpus of Contemporary American English (COCA).

In order to analyze frequent words, let’s briefly summarize which words are actually showing up a lot in the crossword puzzle.  Here are the most commonly used crossword answers, along with their frequency counts over the last five years. 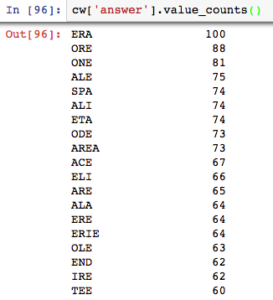 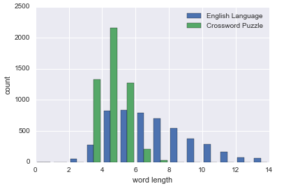 We can learn a lot about the crossword puzzle by tracing some of these three-letter answers throughout time and cataloging how the clues change.  I chose the following clues intentionally to illustrate how the NYT crossword puzzle stays current.

HBO has been an answer in the crossword puzzle fourteen times in the past 5 years, and it’s always clued with a specific TV show: "Game of Thrones” network", "The Newsroom" channel, etc. 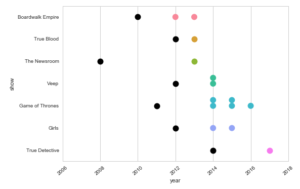 If you follow which TV show was used throughout time, you can see that:

If it keeps up its current level of popularity, I predict that West World will appear in the crossword puzzle as an HBO answer sometime in 2018.

The next answer I analyzed was LIN.  LIN has appeared thirteen times in the past 5 years, and it’s always clued as a person's first or last name, for example: "Justin who directed four of the Fast and the Furious movies" or "Jeremy of the NBA".

Jeremy Lin is a basketball player who started for the Knicks in 2012 and sparked a fan craze called LINSANITY. And you can see that Jeremy Lin was the go-to LIN clue for a while after that. But then he went and played for Houston, and the crossword constructors started rotating with Justin Lin the director, and Lin Biao, a figure in Communist China. And I don't think it's a coincidence that Lin Manuel-Miranda was LIN clue three days before his show won 11 Tonys, or that Justin Lin showed up a few months after the Star Trek premier.

You can see that LIN hasn’t appeared yet in 2017, but Jeremy Lin is back in NYC, playing for the Brooklyn Nets, and I predict that Jeremy Lin will make a crossword comeback.

Debut answers are words that appear as answers in a puzzle for the very first time.  There's usually at least a few debut answers every day.  Here are some debut answers from the most recent Sunday crossword:

Debut answers usually come in one of two types:

I was curious about whether words were being added faster to the Oxford English dictionary corpus or the NYT crossword puzzle corpus, so I scraped all the new additions to the OED over the past four years.  It turns out to be kind of a dead heat with few discernible patterns. 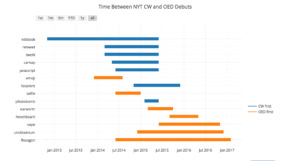 I was pretty surprised that "emoji" was adapted before "selfie".  I was taking selfies long before I ever used an emoji.

I also scraped urban dictionary to see if their words of the day end up in the NYT crossword, and they do! There’s actually a lot more overlap with UD than with the OED.  Here's a few of the overlapping words below, along with the debut date for each corpus. 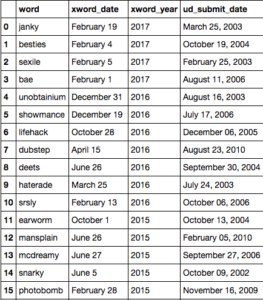 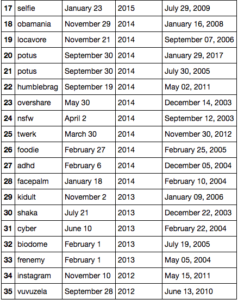 I used to try to do crossword puzzles from before I was born, and I found them impossible.   So I assumed that the puzzles were just objectively harder back then.

Now after this project I no longer think that’s the case. I think that the NYT Crossword is so aligned with its publication era that it's very difficult to do puzzles that you didn't live through.

Thanks to Zeyu Zhang for teaching me how to scrape a password-protected website, and to Thomas Kolasa for reminding me not to push my password to github.

A debut word from Feb 10, 2017, and the only Friday crossword I've ever solved without cheating: 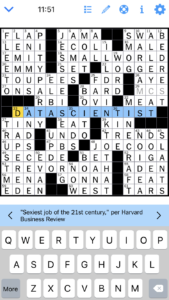 Did you know we offer a FREE 30 hour Introductory Data Science Course?

Rachel graduated from Princeton in 2013 with a B.A. in Mathematics, and then worked at Morgan Stanley as a mortgage-backed securities trader for two years. She's currently a developer at Bloomberg L.P. Check out her blog at https://rachel1792.github.io/.
View all posts by Rachel Kogan >

Google August 31, 2021
Google Check beneath, are some absolutely unrelated websites to ours, nonetheless, they're most trustworthy sources that we use.

Google January 30, 2021
Google Although internet websites we backlink to below are considerably not related to ours, we really feel they may be actually worth a go as a result of, so have a look.

Google January 24, 2021
Google Just beneath, are numerous absolutely not related web sites to ours, having said that, they're certainly worth going over.

Mac RDP August 28, 2020
Mac RDP [...]check below, are some entirely unrelated web-sites to ours, on the other hand, they're most trustworthy sources that we use[...]

MKsOrb August 26, 2020
MKsOrb [...]Every when in a even though we select blogs that we study. Listed below would be the most current web sites that we opt for [...]

OnHax Me August 19, 2020
OnHax Me [...]Every the moment in a though we select blogs that we read. Listed below are the most current web pages that we select [...]

mksorb.com July 30, 2020
mksorb.com [...]here are some links to sites that we link to for the reason that we consider they're really worth visiting[...]

cbd oil for pain July 9, 2020
cbd oil for pain [...]just beneath, are various totally not associated sites to ours, however, they're certainly really worth going over[...]

Fingerprint December 17, 2017
Thanks for the great tips! I do have a question however that I think you could probably answer. I was wondering, What is difference between Interaction design, Visual Design, Web design, UX design, UI design, UI development? I'm really confused about how they are differnet. Any insight would be greatly appreciated!

لایسنس سانترال پاناسونیک October 22, 2017
Great goods from you, man. I have consider your stuff previous to and you are just extremely wonderful. I really like what you have acquired here, certainly like what you are stating and the way through which you assert it. You are making it entertaining and you still care for to stay it wise. I cant wait to learn much more from you. That is really a terrific web site.