Contributed by Kelly Mejia Breton. She is currently in the NYC Data Science Academy 12 week full time Data Science Bootcamp program taking place between April 11th to July 1st, 2016. This post is based on her first class project - R visualization (due on the 2nd week of the program).

In many cultures matchmaking and arrange marriages are common.  Today technology developments have advanced matchmaking to make it easier to create good connections.

In recent years online dating usage has grown rapidly.  According to Pew Research Center the general public's perception toward online dating has become much more positive since 2005.  One in ten americans have used an online dating service for themselves.  Many people know someone using online dating or who has found a spouse, or long-term partner this way.  Online dating is definitely becoming more common.

With the internet, mobile, and trendy social networking sites, I wonder if online dating services are capturing all their potential markets?

Using the dataset provided by Pew Research Center, a survey completed in 2013 via telephone with the participation of  2,252 American adults and 185 variables, I explore a potential missing market for online dating services to target. 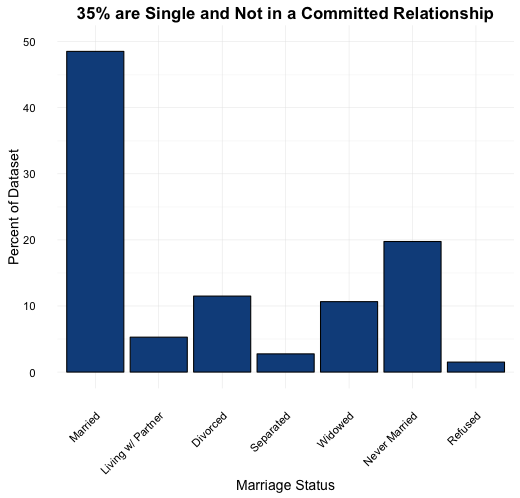 Taking a closer look at the dataset by marriage status we see:

What Percentage of Singles are Looking for Romance? 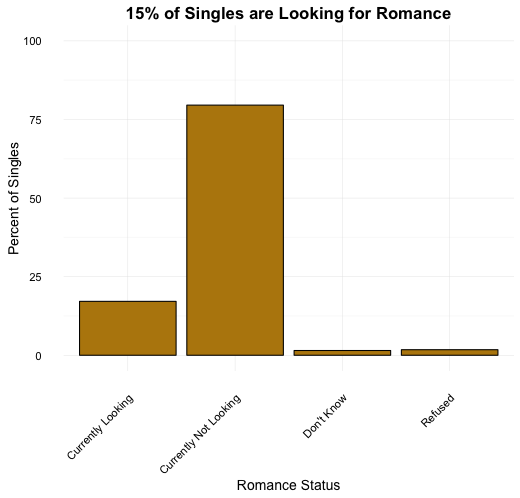 Interestingly, in this dataset, about 80% of singles are not looking for romance.  This group could be studied further and possibly an area where a  product could be explored for this group.

Focusing on the 17% who are single, as well as the 1% who "Don't Know" if they are looking for romance, and the 2% who "refused" to answer, since they did not give a firm "no" to the thought of romance, I explore if any of these observations are utilizing online dating. 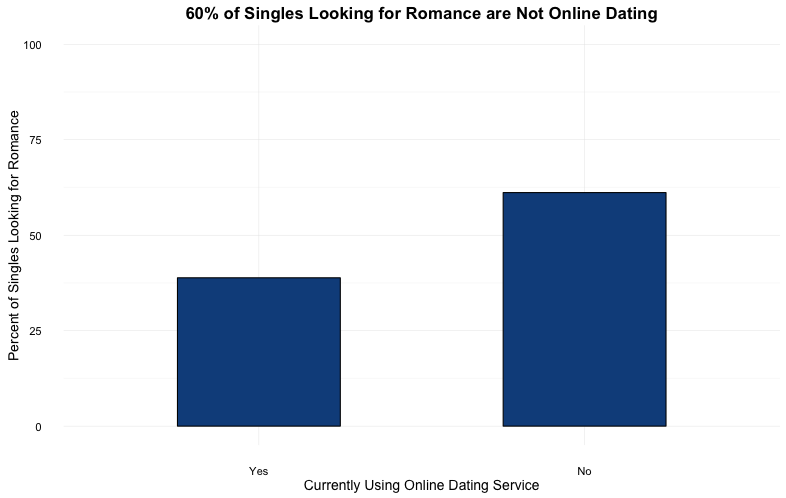 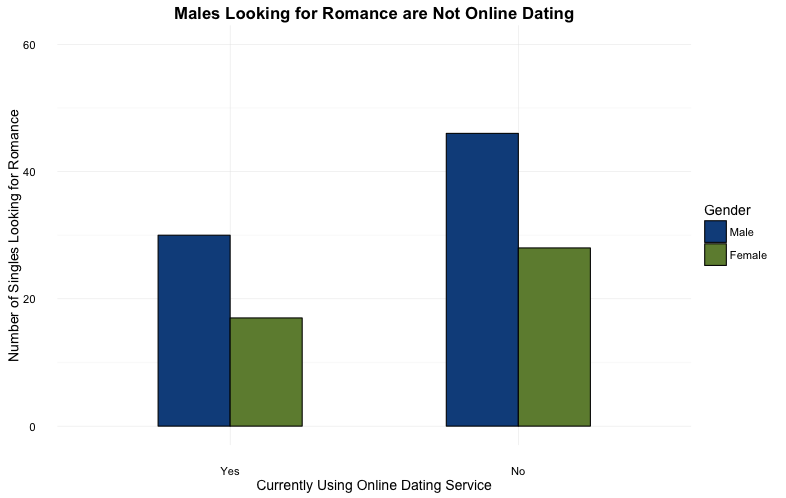 Marketing companies seem to succeed when advertising to men, based on this dataset men are utilizing online dating more than women.   However, visually it also shows greater efforts are needed for this group specifically males who appear to take the target lead.

The Target by Age 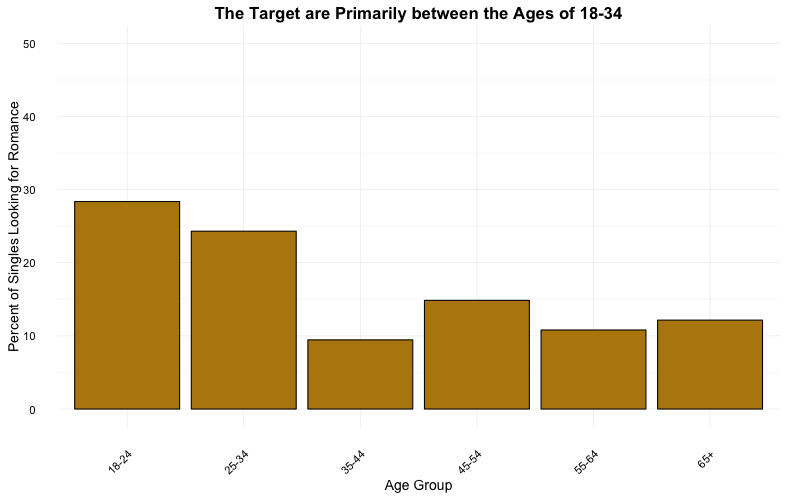 The target appears to be between the ages of 18-34 in this dataset.  Something else interesting happens in the age range from 35-44, it is possibly the prime age singles are online dating.   It could be because around this age people start to think about the future and possible marriage.  This seems to be a group that online dating services are targeting well, possibly their bread and butter.  In the age group 45-54 the percentage of target increases, this could possibly be an age group that could be a missing market as well.

The Target by Education 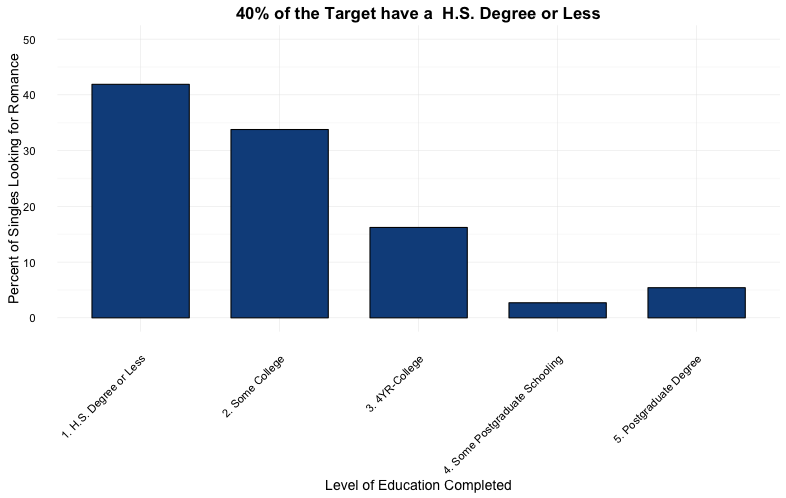 Grouped by education we see a possible relationship, as the level of education completed increases the target decreases.  It is likely the higher the education,  the greater the chances singles looking for romance are using online dating services.  Could be the marketing and sales campaigns are not reaching people with some college education or less.

This narrows our target, we now know they are primarily males, mostly in an age group of 18-34, with  some college education or less.

The Target by Ethnicity 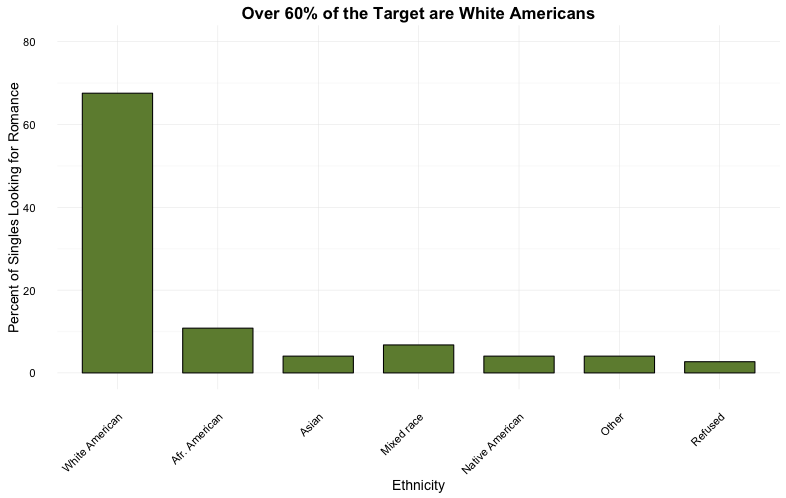 Over 50% of the target mostly have an ethnicity of  White Americans.  African Americans are second but the percentage drops to about 10%.  This narrows the possible target in continuing the online dating growth momentum furthermore.

60% of singles looking for romance are currently not using online dating services.  From this group it appears the target are adults who:

KB is a driven and determined Senior Analyst with nearly 15 years of proven data analytics expertise. Most recently focused on forecasting short-term and long-term global crude oil and product prices for PIRA Energy Group. Previously held a...
View all posts by Breton >

Hith Thapa February 28, 2020
Thanks for providing this points, I will implement this points in my dating classifieds website https://www.vendopage.com/