Contributed by Bin Lin. Bin is currently in the NYC Data Science Academy 12 week full time Data Science Bootcamp program taking place between January 11th to April 1st, 2016. This post is based on his third class project - web scraping (due on the 6th week of the program).

The digital media web site mashable.com provides online news. The goals of this project were:

With the URLs given in the list, web requests were made to download the web pages of each news. Python's BeatifulSoup library was used for web scrapping. to parse and extract the useful information of the news, such as title, author, total number of shares, number of external links, number of images, number of videos, etc.

For convince, an class name "Article" has been created to store the information of these news articles.

Data was stored in a JSON file and converted back to CSV file when R and Shiny were used for data visualization.

What were Hot in Topics and Titles:

Mashable.com has categorized the news into 6 channels: Watercooler, World, Entertainment, Tech, Lifestyle, Business, Social Medias. Watercooler category is for stories that mashable.com think are cool. I don't know how they define "cool". But of course the number of articles in "Watercooler" category is the highest. It is followed by "World" news, "Entertainment" news, "tech" news. See the "Figure: Compare Number of Stories among Categories".

The articles I collected were published by ore than 50 authors. I ranked the authors by the number of published articles and plotted the Top 10 in the Box Plot.

Even though the time of period of collected articles were only two weeks, the distribution of number of shares can still give a sense of article popularity.

Figure: Histogram and Density of Number of Shares

Some of the text-based variables, such as "content", "title", are free-text variables and can not be categorized.  In order to use them for my prediction model,  TextBlob library is used to apply sentiment analysis on these variables. TextBlog is a Python library for processing textual data. It provides common natural language processing (NLP) tasks such as part-of-speech tagging, noun phrase extraction, sentiment analysis, translation, and etc.

Through sentiment analysis, three new variables would be added to represent:

Thus the output of transformation:

Since Python only takes numeric as input when running Machine Learning algorithms, the variable "channel" was converted to binary numbers by using the get_dummies() function in Pandas library.

Since predicting with Machine Learning algorithm was not the primary goal of the web scraping project, only Random Forest algorithm was used for practicing purpose.

I chose Random Forests algorithm for practicing for the following reasons:

Gridsearch was used to fine-tune the parameters for find the best Random Forest model. Three parameters were being fine tuned. Gridsearch might take long time to finish if many parameters are being tuned and the range of each paraemters  are wide. Because this was a relatively small dataset, I supplied relatively wide range to max_depth and n_estimators parameters.

The values for the three parameters that I fine-tuned are: 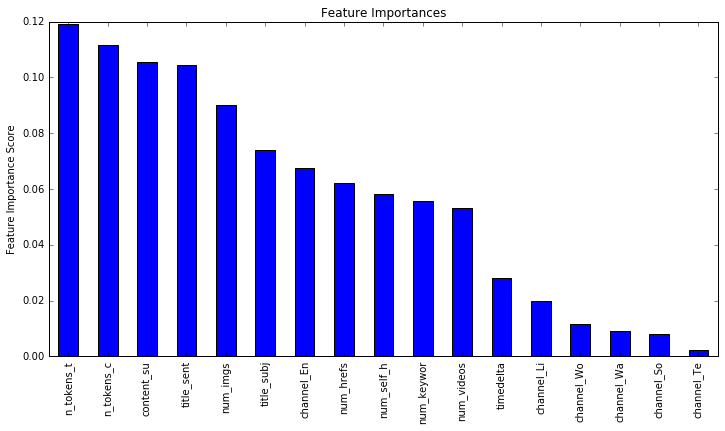 Collecting data through web scraping can be challenging if a web page is not well coded or formatted. I ran into this kind of challenging when the news articles on Mashable.com have different format for different types of articles (for example, video-typed article vs text-type article).

Also online news popularity is hard to predict because it is hard to know what elements have impact on the user's sharing behavior. Furthermore, I believe that the content of the article should have impact on the user's likeness. However, I am not able to do deeper analysis on the content itself even though simple sentiment analysis was applied. Random Forest algorithm only gave me 0.6850 accuracy.

For future works, I would like to try other algorithms and compare them to the Random Forest algorithm. I would also like to see if there is a better way to analysis the article content. I have found that there was actually a past Kaggle project regarding the mashable.com online news popularity. They were given a datasest with all the articles from year 2015. I would love to dig into this to see what the other Kagglers' have done.

Bin is a former professional in software development with now positioned for Data Scientist role. With both strong programming skill and newly acquired machine learning skills, Bin is able to apply scientific thinking to predict or uncover insights...
View all posts by Bin Lin >

O Globo esporte October 2, 2017
Do you love it regular posting when you must keep regular content in your blog in order to commercialize it. However, save on your closest friends and family, nobody usually mind your blog post. They will purchase from you some money to examine a web site or a product for the owner.

ronak goyal November 3, 2016
Hi Bin Lin, I have working on the similar type of project. Can you help me in my proect. Regards Ronak

agence web maroc May 6, 2016
What's up Dear, are you in fact visiting this website regularly, if so then you will definitely get nice knowledge.