Opioids in America: An analysis of prescribing rates and overdose deaths by state

In the mid to late 1990’s, the number of opioid prescriptions to treat various conditions outside of cancer care started to rise and was backed by data. This was due in large part to aggressive marketing from the pharmaceutical industry and its repeated assurances that these medications were low-risk and not addictive. Pharma also invested a lot into lobbying and campaign contributions to various facets of the government to prevent restrictive legislation.

It was worsened by an increase in cheaper opioid alternatives that patients turned to when they were unable to obtain opioids, which categorized the second and third wave of the crisis (the second wave beginning 2010 with the rise in heroin, and third wave in 2013 with the rise in synthetic opioids such as fentanyl and methadone). The problem was increasingly prevalent in the USA because of the structure of our healthcare system that gives insurance companies the power to determine which treatments are covered ; opioids are usually cheaper than other therapies.

The prevalence of opioid use and abuse was officially declared a crisis in 2017 by the Department of Health and Human Services, paving the way for recognition of the problem and the need for reform. This led to measures that increased state prescription monitoring programs and progressively increased reporting requirements. This was joined by increasing access to substance abuse treatment programs, featuring both inpatient and outpatient services, as well as increased access to Naloxone to prevent and treat drug overdoses.

Why is this important? The opioid epidemic has affected many facets of American life. Drug use by expectant mothers has caused a rise in Neonatal Abstinence Syndrome, where newborns are going through withdrawals after being born. There has also been an increase in the outbreak of infectious diseases, such as HIV and Hepatitis A, linked to illicit drug use.

According to a study done in 2013, 74% of recreational opioid users reported that they obtained their opioids from a doctor. This is why I wanted to see which states were prescribing the most opioids for their citizens to determine if there are trends that break down by state. I also wanted to analyze which states had the highest amount of overdose deaths in relation to state population, as well as the impact of measures put into effect.

Finally, I wanted to see if there’s a relationship between prescribing rates and overdose deaths. I did this by using the Opioid Prescribing Rates dataset on Kaggle, which focused on Medicaid patients, with data from US Open Data Portal, data.gov. I also used the CDC website to obtain information on overdose deaths for each state and year.

After cleaning the datasets, I looked at the medicaid opioid prescribing rate, which was calculated by taking the total opioid claims by each state and year and converting it to a percentage of the total Medicaid claims by state and year. I was able to see that, overall, Medicaid prescribing rates for opioids steadily decreased between 2013 and 2019, with 2 outliers.

From the visual above, we can see that Colorado stands out as consistently having the highest prescribing rate. In contrast, New York consistently has the lowest rate. While the other states' rates seem to decrease during the selected time period, Montana and Virginia’s rate actually increased between 2017 and 2019, which should be studied further in future work.

I then wanted to see which were the top opioid prescribing states between 2013 and 2019, to see which states I should focus on in future work. I selected the top ten states for each year and plotted them on a frequency plot to see who were the repeat offenders. As we can see below, Colorado, Nevada and Wisconsin were in the top 10 states every year that we had data for. 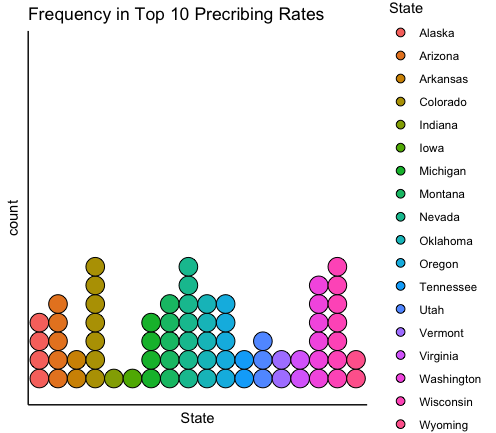 Next, I wanted to look at the number of overdose deaths nationwide and compare this state-wise. I did this by taking the number of overdose deaths and making them a proportion of the total state population. When we look at the map, we see that West Virginia stands out as having the largest number of deaths in relation to population, and that rate increased from 2015 to 2017. One of the reasons for this could be the fact that many jobs in West Virginia, such as those in the mining and manufacturing industry, involve manual labor that can cause injuries that would end up being treated with opioids.

Next I decided to focus on certain states that stood out in the data so far, which were Colorado, Wisconsin, Nevada, Virginia, Montana, West Virginia and New York. These were states that previously fit into one of the following categories: 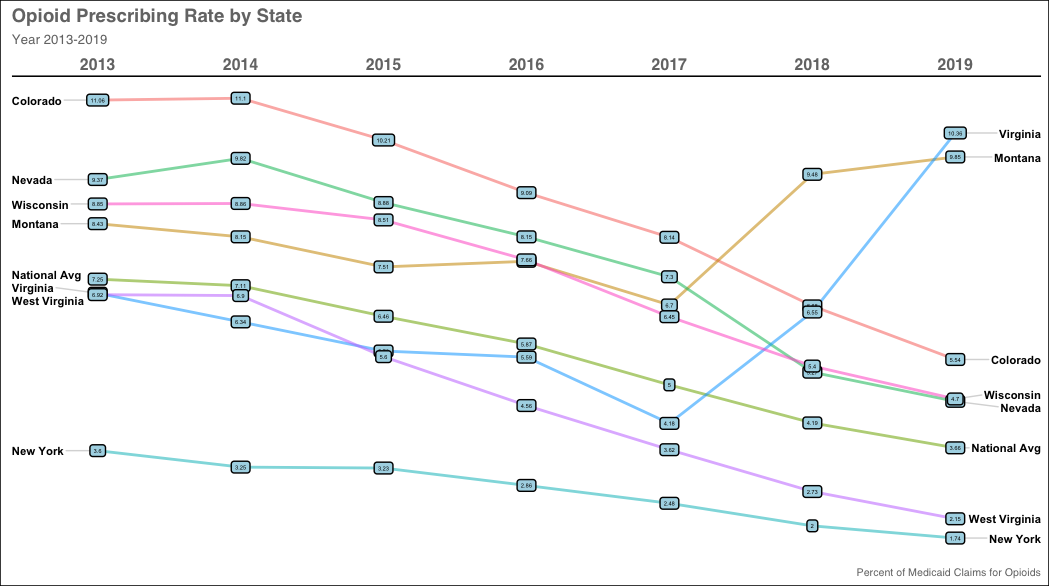 When looking at the change in Medicaid prescribing rates over this time, we see a large decrease in prescribing rates, with West Virginia having the largest decrease, going down by 68.9%. This was followed by New York, Nevada, Colorado and Wisconsin, displaying 51.7%, 50.4%, 49.9%, 46.9% decreases, respectively. Meanwhile, Virginia saw a 49.1% increase in medicaid opioid prescriptions, a sharp increase that would need to be studied further. 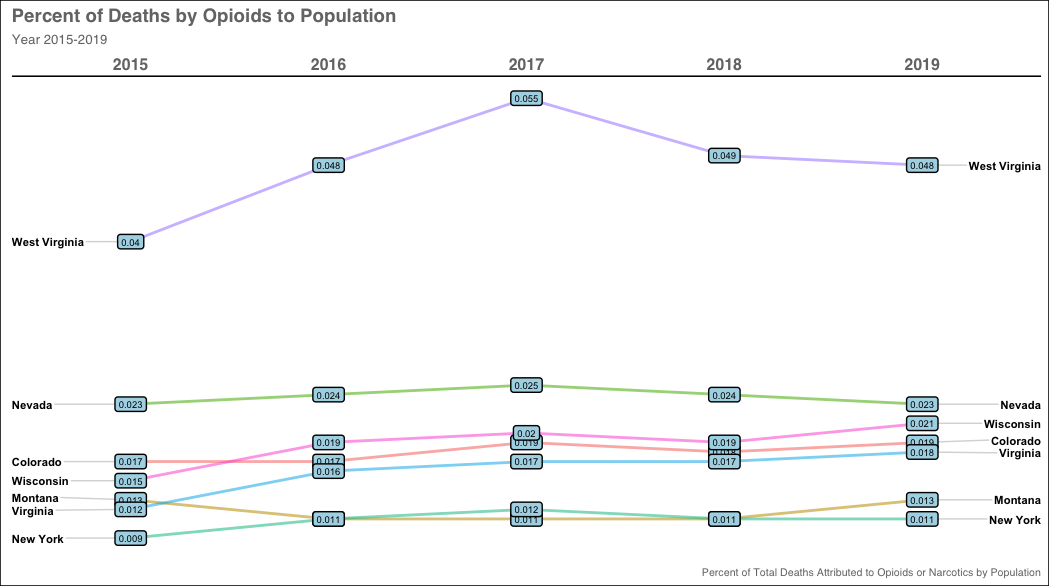 Last, I looked into overdose death rates for these states to see if they exhibited any trends in relation to the prescribing rates. By looking at the graph, we see the severity of the opioid epidemic in West Virginia compared to the other states.. This seems to come to a point in 2017, when the state rolled out new policies to address the problem. These policies included using federal funding from settlements with the drug companies to create new treatment and recovery infrastructure, as well as expanding medicaid to increase coverage for treatment programs. When I calculated the correlation between the Medicaid prescribing rates and overdose death rates, it was -0.298, indicating that they were only weakly correlated with each other. 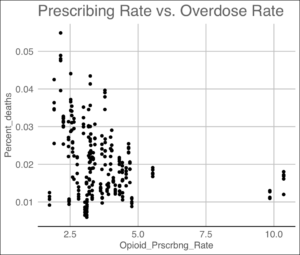 Conclusions From Data and Future Work

As a result of this project we can see that overall medicaid prescribing rates for the country are decreasing. We did not see a significant correlation between states with high Medicaid prescribing rates and states with a high percentage of overdose deaths. It does appear that measures that are being taken to combat the epidemic, particularly in West Virginia, do seem to be working thus far.

In the future we could expand our analysis to include other insurance plans and cash paying patients to compare trends and correlations between prescribing rates and overdose deaths, as well as compare these trends to measures being taken to examine if these measures are effective. Finally, while this data ends in 2019, this analysis could expand to 2020 and beyond to examine the effect of the coronavirus pandemic on prescribing rates and overdose deaths throughout the country, since access to many of the rehabilitation and treatment resources was restricted throughout the timeline of the pandemic.

I am a data scientist and PharmD with hands-on experience in healthcare and an interest in health analytics. I am highly collaborative and passionate about new data driven approaches to measure and improve health.
View all posts by Amanda Manfredo >