Overview of users' ratings from IMdB

This website is here to offer you an overview of the movie lens dataset. It shows both the general info based on all users' rating and a user info page to choose a specific user for more details. There are about 20,000 movies available for 671 users to view, but only about 10,000 movies were rated. Also, the ratings for all the movies are not relatively equally distributed. For example, userID 1 has only watched approximately 20 movies, meanwhile userID 547 has watched more than 2000 movies. This implies there are still many to discover from the dataset.

For the general page, it is important to see how the average rating of every single movie in the dataset. People can choose from 0 to 100 movies to see their average ratings. As it is showed in the graph below, the average rating for some movie are perfectly x.0 points. This may not only mean all people rated this movie at this point, but possibly that only a few people have rated these movies leading to those perfect scores. 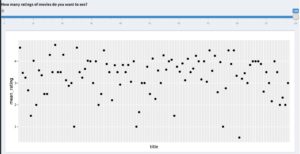 At the same time, this page will show the average rating of all genres that all movies belonging to. There are 20 genres in total from the data set. They are Fantasy, Children, Mystery, Film-Noir, Animation, Comedy, Adventure, Crime, War, IMAX, Musical, Documentary, Western, Drama, Action, Sci-Fi, Horror, Thriller, and Romance. It is noteworthy that even though the rightmost bar, War movies, seems much more higher than the other genres, but actually has the least views than other genres. Also, if a movie is rated lower than 2.5 at the very beginning, 80% of the users will choose not to watch it. This tendency can be demonstrated from the table below. 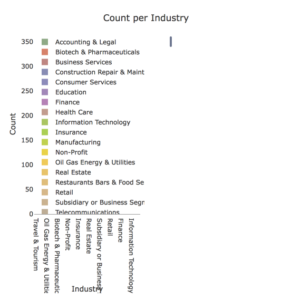 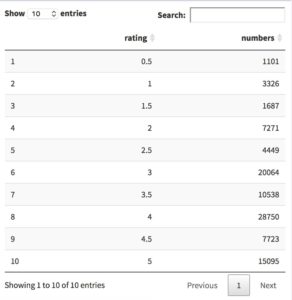 For the user info page, people can type in any user ID valid for the dataset. As I mentioned before, different users have different amounts of ratings. It is minimum at 20, and maximum at about 2300. Taking the user who has the most amount of ratings, 547, as an example, he has watched Drama the most comparing with all the other movie genres. However, his average rating for each genre is relatively similar. It is a huge question to determine if his ratings are actually creditable due to this kind of spread in his ratings. And this needs more powerful techniques to analyze.

Based on this overview of the dataset, this represent the potential fields to be studied like validating the creditability of users' rating. For this overview, I have not adopted the timestamp which originally contained in the file into this project. However, I would like to add this kind of information in the future that allows to build up a probabilistic reasoning network based on Markov chains and temporal probability model. Hopefully, this can bring more accurate prediction of ratings.

View all posts by Xinyue Yuan >