Every year, eager winemakers from around the world submit their creations for judgement with the hopes of joining the ranks of the top winemakers and earners. Wine is typically rated on a 100-Point Scale created by Wine Spectator.  After numerous rounds of testing,  sommeliers give their decision along with an explanation as to why they thought it deserved that rating. The purpose of this project was to look at wine data to see if I could dig up any trends or insights among the qualities of top rated wines so that winemakers can consistently produce excellent quality wine.

This project is based on data from WineEnthusiast, a website that has contains numerous wines and their ratings. The data set was provided by a user on Kaggle, who scraped 150,000 reviews of wines rated 80 points or higher from Wine Enthusiast in November 2017. It should be noted that this data came from an American website so it is not a comprehensive list of all top rated wines in the world.

My research questions going into this project are:

First, I created a choropleth to be able to easily see where the most wine is produced. 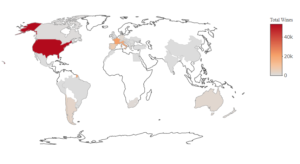 The map above shows the Total Wines produced in each country. From the legend, we can see that the darker the color on the map, the more wine the country generates.  The map shows that the United States produces the most wine with France coming in second. When we hover over the text, we can see exactly how many wines of each classification is produced. This shows us that these two countries need to be investigated further to see why they do far better compared to other countries.

To look further, I created a chart that shows the state or province that the top rated wines come from in their respective countries. By looking at the specific provinces with the highest production we can try to look for similarities and differences between the two regions. 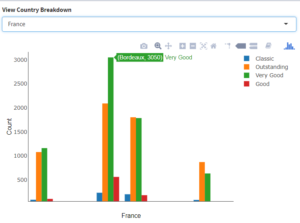 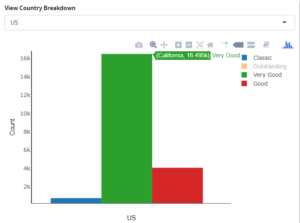 From these graphs, we can see that Bordeaux is the top producer of wine in France and California is the top producer in the United States.  Bordeaux's climate is characterized as very dry except during the summer; and California's main wine producing area, Napa Valley,  also has a dry climate. These results show that winemakers from these areas may have an advantage in producing higher quality wine due to the climate the fruits are being cultivated in.

Next, I performed a text analysis on the descriptions the sommeliers gave for each of the 150,000 wines in the data set.  After filtering the wines based on their ratings, I used the text mining package in R to extract the information.  By looking at the most common words used to describe wines in each category,  we learn the characteristics to emphasize and which to minimize in order to achieve a certain rating

For example, we can see from the chart on the left, the most commonly used term in the descriptions for 'Good" rated wines is 'sweet'.  Alternatively, the most used term in "Classic" rated wines is "black". There is a big difference between something that tastes "black" and something that is "sweet". As a result, we can summarize that wines are more bitter rather than sweet receive a higher rating.

This application is valuable to winemakers because it will help them to have an idea of what characteristics are necessary to attain a certain distinction. The maps also show that wineries in drier climates tend to have better results.  After seeing the results from this data, I would like to further investigate the descriptions provided by the sommeliers to extract the sentiment associated with each word and a text breakdown by country.

Overall,  I enjoyed using R and Shiny to create this visualization and I look forward to investigating further and adding more tools for winemakers. Feel free to check out my application here!