Our team had the privilege of collaborating with the data science team of one of the largest beverage companies in the world.  For this particular project,  the team was given data from two completely separate machines, one soda dispensing machine and one image capture machine.   The idea was that through the soda dispensing machine, the team can track what drinks are being chosen by users, but by adding an image capture machine, the team can also gather demographic information of each user. Our task was to be able to merge together information given from both machines to make a connection between WHO (user demographic information) was ordering WHAT (patterns in dispensed drinks).  The end result will be valuable insights into customer preferences and behavior that can be scaled seamlessly.

As mentioned above, our data was retrieved from two unrelated machines with widely differing functions and output.

Before any analysis and statistical learning can be performed.  There were two glaring challenges that needed to be resolved to accurately merge data from both machines.

Since the time stamps of two machines were not synced, our team needed to figure out a way to correctly piece together the correct time of each user event.  The method we chose was cross-correlation which would identify activity patterns in two time series and essentially apply a shift to find a best fit between the two data.  Using this method, we were able to discover that the max number of linked events were occurring at a 1 hour and 5 second shift, meaning if we shifted the soda dispenser time stamps by 1 hour and 5 seconds to match the image capture data, we would see the max number of overlap between data from each machine.  By finding the time shift we were one step closer in being able to make a connection between user demographic information and trends in drink preferences. 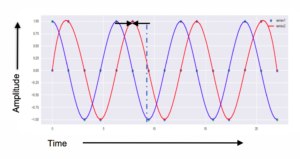 Figure 1: Example of two different time series, in our case the two logged data points from each machine. 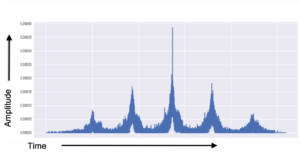 Figure 2: Result of cross-correlation algorithm.  The peak in the middle of the graph shows the shift in time (seconds) that has the largest overlap in activity between the two datasets.

Using a combination of all three rules, we created a function that determines individual user events across the entire data.  Now that we knew the time shift between the machines and had identified individual events for both Spire and EyeQ data we were able to merge the two data and create a connection between user and beverage choice.

Out of respect to the NDA agreement with our partner team, we will not be publicly sharing the key findings from our analysis.  As expected though, piecing together demographic information with user beverage preferences allowed for powerful insights for the company's strategy moving forward.   The team was able to find drink preferences by both gender and age groups.  Not only did we see what the most popular beverages were in certain gender and age groups, we were able to dive deeper into more detailed criteria such as preferences for carbonation and sugar levels.  Finally, one of the most valuable findings, were tracking users use of a flavor addition feature in the soda dispenser.  Users were able to choose up to 3 flavors to add to widely known fountain beverages.  Essentially,  this feature served as a test market for brand new beverage products and our team provided key insights to particular flavor/beverage combinations that have a lot of traction. 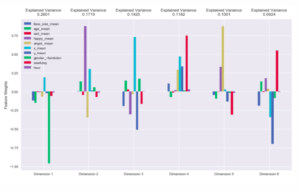 Figure 3: Principal Component Analysis - We see for each principal component is a mixture of many independent variables that is rather challenging to interpret.

Figure 4: Confusion Matrices for Random Forest and Gradient Boost Models-  We see that for both models, we reached rather low errors in predictions.  But upon deeper inspection we see that the majority of predictions were just predicting the user will not choose certain drinks.

Overall, the conclusion was that the  data had two few observations( too few instances for each unique drink, thus losing predictive power) and there were too few features to effectively run models (variable importance plots varied widely from model to model and in some cases iterations of the same models.  Larger number of observations seems to have helped to run machine learning models more effectively.

Our team strongly emphasized making our work with this particular datasets scalable.  As mentioned earlier in the blog post, not only did we figure out a method of syncing two unrelated machines, we created an algorithm to identify unique user events.  This means that our partner beverage company can deploy numerous image capture/soda dispenser machines across multiple locations to collect data and perform analysis.  This opens the doors to possibly understanding trends in beverage choices by location in addition to gender and age.

Josh graduated from the University of California San Diego with a bachelor's degree in Psychology. Upon graduating, he attended Columbia University's Post Baccalaureate Program for Medicine. After realizing medicine was not his passion, he worked as a Product...
View all posts by Josh Yoon >

View all posts by Michael Zolla >

Hsiang-Yuan Lee graduated from New York University with a M.S. degree in Industrial Engineering. He loves finding insights from different types of data and is open to learn new skills. Hsiang-Yuan decided to become a professional data scientist...
View all posts by Hsiang-Yuan(Joshua) Lee >

Tianyi Gu is a creative thinker with strong quantitative and analytical skills. Tianyi received his MS in Urban Informatics from New York University and BS in Actuarial Science from SUNY Buffalo. With great passion in infinite possibilities in...
View all posts by Tianyi Gu >

View all posts by Shantanu Singh >

View all posts by Manasa Godkhindi >

View all posts by vishwa patel >

View all posts by Yufeng >

View all posts by Ning Sun >

R Shiny
A Mini MacroEconometer for the Good, the Bad and the Ugly
Capstone
Your Next Trip in the US: Categorized Intelligently
Student Works
Parsing and Visualizing Transcriptomics Data in Shiny
Machine Learning
Clustering and Classifying Violent Behavior From Criminal Records
Capstone
Predicting Stock Movement of Hang Seng's Components