Kaggle competitions offer a great opportunity for those who want to practice and improve on their data science skills. Its also always fun to play with different data sets that push you to explore and learn different techniques. It was for this reason that I decided to take on the 'House Prices: Advanced Regression Techniques' challenge where the goal is to predict housing prices in Ames, Iowa. This post will describe how I optimized my pricing model while following best practices that are expected outside the Kaggle environment. The general outline of the process was this:

The data set consists of 79 features that will be the predictors for 'SalePrice'. My first instinct was to look at all the variables and their data types. I saw that features like 'MSSubClass', 'MoSold' and 'YrSold' were integers but should actually be categories. I then went and changed them to object types so that I can change all the necessary variables into categories in one go. I left the variable 'YearBuilt' as an integer due to its linear relationship with 'SalePrice'.

There were many ordinal variables likes 'ExterQual' and 'BsmntCond' with values such as "Excellent", "Good" and "Poor"  In an effort to lower dimensionality during the dummification process, these variables were label encoded. This preserves the order of the values with the assumption that sequential levels are one unit better than that last.

If a variable has TOO many missing values, we might as well just get rid of the whole column. Imputing that many values would be way too high of a risk in under-representing the true population. 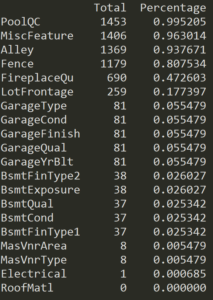 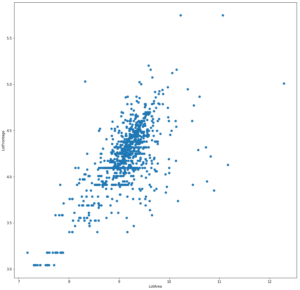 A house may also go for a higher price depending if it can accommodate the tenants well. Bath Capacity and Parking Capacity were features engineered by dividing total number of baths/garage cars by the number of bedrooms.

Finally many of the variables that could be combined, were. This resulted in features like Total Bathrooms, Total Floor SF, Total Porch SF, etc.

The last effort to lower dimensionality was to take out any columns that don't have a lot of variation within its values. Having zero or near zero-variance do not add value in our predictive model which included 'Street', 'Utilities' and 'Condition2'.

Outliers can make our model overfit and decrease our model's ability to generalize well. With visual inspection only, I've removed observations that took away from the linearity of the feature plotted with SalePrice. These included features like 'LotFrontage' (removed obs > 250), 'GrLivArea' (removed obs > 4500) and 'TotalPorchSF' (removed obs > 700). 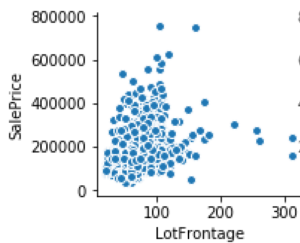 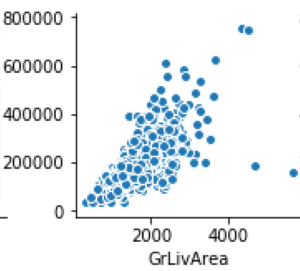 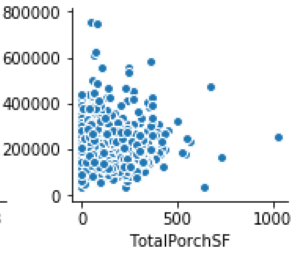 For the dependent variable, we see a rightly skewed distribution. In order to meet assumptions linear regression, we take the log to ensure constant variance of residuals. 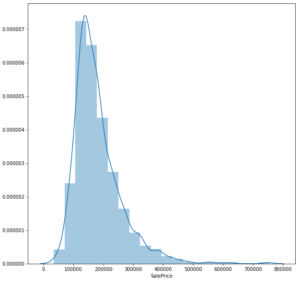 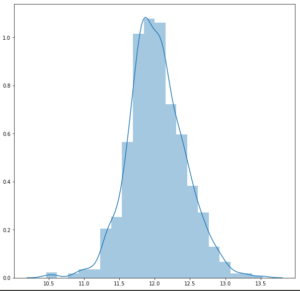 However, taking the log of the independent variables in order to have a normal distribution can be beneficial and even kill two birds with one stone. 1: It may help in creating a stronger linear relationship with the dependent variable and 2: it may be used as a way of dealing with outliers. Thus, I took the log(x+1) of any numerical feature that had a skew value greater than 0.6 or lower than -0.6 as well.

After the data set was dummified (resulting in 250 dimensions), it was time to model. 3 regression models and 3 tree based models were ran while GridSearchCV was used to tune all hyperparameters for all 6 models. Once tuned, they were all tested on a hold out set (1/8 of the original training set). The results in order of lowest hold out set RMSE are listed below:

No surprise that the regularized linear regression models outperformed the tree based models as most of the features in the data set had a linear relationship with SalePrice. It would seem that Lasso was preferred over Ridge insinuating the need to push many of the Beta coefficients of certain variables to zero.

Each of these models were then submitted to Kaggle. The results in order of Kaggle's RMSE are listed below:

Though the Kaggle scores were slightly higher than the ones I had in my hold out set, the ranking of the models were consistent, only that Lasso had overtaken Elastic Net.

My last trump card to optimize my Kaggle score was to reap the advantages of each model by creating a stacked model. Since the Lasso model had the best hold out set RMSE, it was used as the meta model while the other 5 models were used as base models. The final Kaggle result for the stacked model upon submission was (.12248), an improvement from all the other models. This ranked 990 out of 4634 contestants.

If there is one thing I learned from this project that I can pass on to any aspiring data scientist is that slight differences in data imputation can change EVERYTHING. How you decide to deal with missing data can either push your model to generalize well, or it can pull your model into some imaginary world. There is almost a step by step approach to tuning your models, but when it comes to preparing your data, you really have to be creative. At some time in the future, I will definitely go back to this project and see how I can better impute and engineer more powerful predictors.