The goal of the project was to explore the data set and try to predict housing prices in Ames, Iowa using various supervised machine learning techniques - a data science competition hosted by Kaggle.

Our team worked on the project during the second half of October - beginning of November 2017.

1. Understanding and Exploring the Data

We created our github repository and fired up Jupyter Notebook. We chose to complete the project entirely in Python.

Initially, we worked individually to familiarize ourselves with the data and gather insights from exploratory data analysis (EDA) using pandas and matplotlib. We focused on the following:

Below are a couple of examples of data visualizations that were part of our EDA. 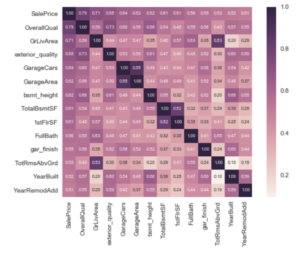 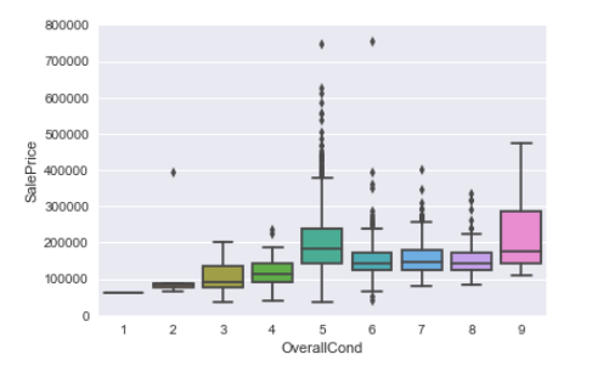 2. Brainstorming and First Round of Feature Engineering

After the initial exploration, we came together to discuss findings. We logged all observations in a shared google sheet that proved valuable in organizing our findings and then selecting appropriate actions to take on each feature.

For some predictors that we considered important but that had missing values we imputed those using MICE (Multivariate imputation by chained equations).
We also identified outliers by first standardizing all predictors and then calculating - for each observation - its total euclidean distance to its closest 40 "neighbor" observations. We removed 13 observations for which this metric was extremely large - to avoid a bias in our model.
After many hours of transforming, combining, imputing, and error reading we had a clean data set ready for predictive modeling. It had 104 predictors.

From there, our team finalized the first modeling-ready data set. After that, we devided up the work of applying the trying to predict house prices using the following machine learning algorithms:

After working for a while individually, we came together to look at and learn from each others’ models, which was a great learning experience. Each team member brought a deeper understanding about his/her model and showed the group a few new technical tricks discovered along the way.

To ensemble the models, we averaged individual models' predictions and then tried stacking individual model predictions using a meta model. We were pretty happy with our score on cross validation and the Kaggle Leader Board, the score being root mean squared log error (sale price was logged to make the size of the errors more proportional on the low and high side of the price spectrum). Our ensembles came out to around 0.125 on the Leader Board after scoring around 0.115 in cross validation on the training set. That 0.125 score on the Leader Board translates to a mean squared error of about 13.5% in dollar terms, good but not not quite as good as we had hoped!

5. Second Round of Feature Engineering – A Different Approach; Shorter Turnaround

Sensing that some information had been missed in some of the variables we originally dropped, we decided to take a risk and ignore multi-col-linearity (!) Also, we LabelEncode categorical variables in the hopes of enhancing the tree-based models. That was different from our first round - when we built dummy variables for categorical variables.
Overall it was a more parsimonious treatment of the features. However, this time we ended up with about 180 predictors.

To our surprise, and some dismay, we found that our predictive techniques performed better on the new data set ! And that despite the fact that we ignored multicolinearity, it seemed like our models were able to deal successfully with the colinearity of the house features.

After some trial and error ensembling, we arrived at an ensemble that balanced a few of our best individual models. These models appeared to balance each other in regions of housing prices where the residuals (the errors) of the model increased, usually at the low and high tails of the housing prices in Ames.

At the end, we achieved a top 8.9% position on the Kaggle Leader Board with a root mean squared log error of 0.115. This also happened to be the best in our class 🙂

The above was a high-level look at our work flow. Here is how the soup was made:

We decided to omit variables that had virtually no variance. Such as:

For each ‘object’ column we looked at its meaning and level frequency. For example: 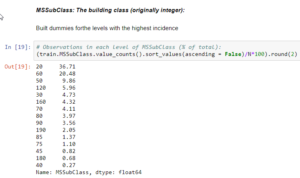 We built dummies for higher incidence levels: either manually or using pd.get_dummies()

We transformed ‘object’ columns that had quantitative meaning – using our judgement: "Theory Driven" transformation of quality variables to scores, that is making up a sensible score! For example: excellent kitchen quality = 3, good = 2, average = 1, no kitchen = 0.

We excluded some numeric variables if they were redundant statistically & conceptually:

We combined some highly correlated numeric variables into one and used only the new one in our models:

For example, we combined into one new variable ‘average_quality’ the following quality-related variables that were highly correlated – and then omitted those 4 from our models.

To reduce multi-co-linearity, we regressed one variable onto several others and kept only its residual:

Example of regressing age of the house onto brick & tile foundation dummy, garage perception, number of full baths, and exterior vinyl siding dummy – because age was highly correlated with all those variables:

We kept updating and studying the correlation matrix, striving to reduce predictor multi-co-linearity: 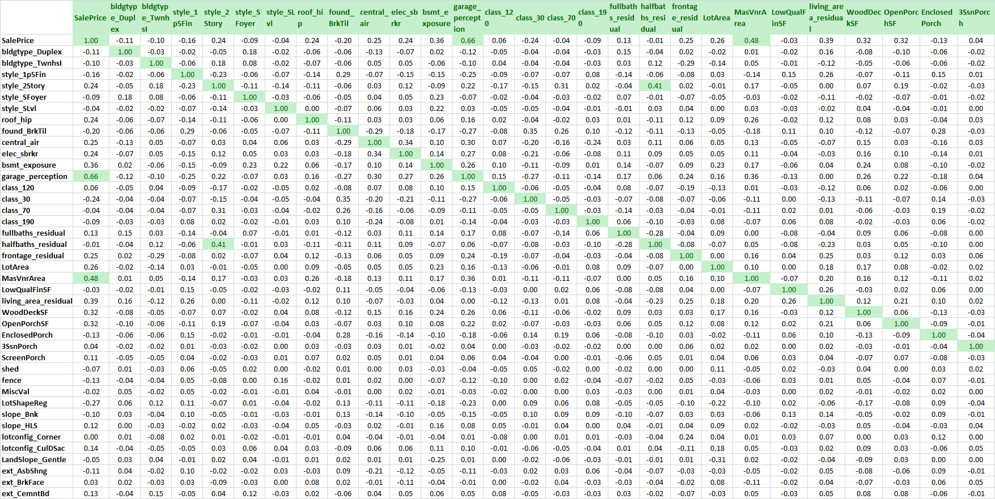 Finally, we transformed the target variable and some predictors and scaled (standardized) ALL predictors

We used the log of the dependent variable, SalePrice, for modeling: 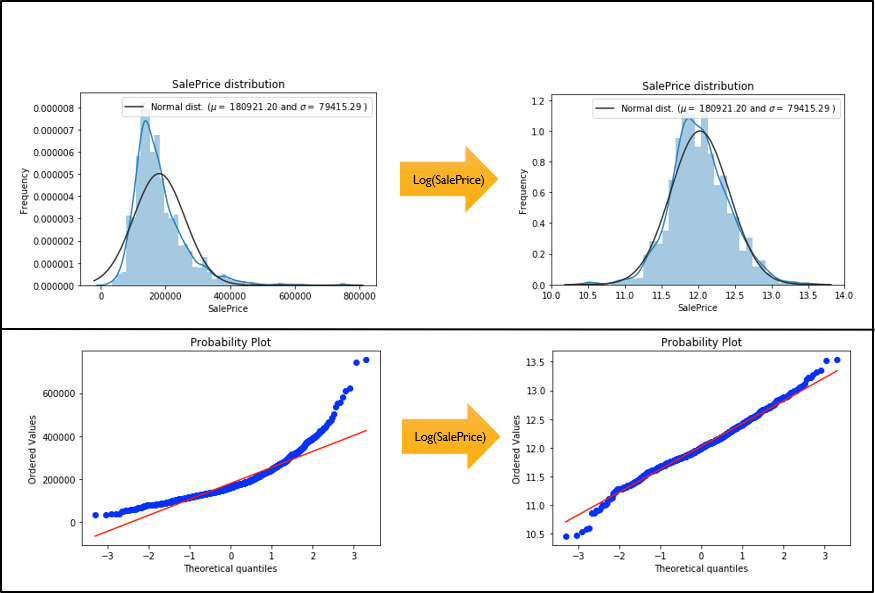 Identifying and eliminating outliers: Outliers in the training set could bias our model!

We decided to leverage ‘label encoding’ to recode all truly categorical variables:

2.Stacking: used the same hyperparameters but trained a meta model (either a lasso or a gradient boosting machine) to produce predictions

3.Due to the poor performance of our tree models, we averaged the predictions of just SVR and Elastic Net

Thank you for reading!

We appreciate your time and any inquiries you might have (especially about new opportunities). Visit the github project of Henry, Gwen, Dimitri, and Daniel to see the code.

As a bonus, see below for a conceptual and sklearn based cheat sheet on the various models used above: