As a part of our curriculum at the NYC Data Science Academy 12-week bootcamp our team entered the House Prices: Advanced Regression techniques challenge on Kaggle. The dataset contained information from 1460 houses sold in Ames, Iowa between 2006 and 2010. The challenge represents a Supervised Machine Learning Regression problem as our team was asked to learn the mapping function from the 80 input features to the output (‘SalePrice’) which is a real value. Our goal was to develop a model that is both accurate— in that it can predict the ‘Sales Price’ close to the true value — and interpretable — in that it helps buyers and sellers make informed decisions.

In this blog, our team will share the steps followed to build a predictive model in Python and R. Described below are some illustrative examples of the transformations applied.

Since it is very cumbersome to explore all the features at once, our team broke up the task by dividing the data into smaller sub-sections of features for the purposes of examination. Our team paid particular attention to any feature that:

Our team combined the train and test datasets for exploratory data analysis, data cleaning and feature engineering. Some of our basic takeaways are as follows:

Our team found two sets of features one describing the ‘basement’ and the other the ‘living area’ carry redundant information. '

One of the challenges of this dataset is the missing data (Figure 1). Over 80% of data is missing for variables like ‘Alley’, ‘Fence’, and ‘PoolQC’. The missing values indicate that these features are not present in the house. Our team imputed the missing values in these columns with ‘None’

All other features except for ‘LotFrontage’ were imputed with the value of the feature’s most frequently occurring value, or some hardcoded value based on what made the most sense in each situation.

To impute 485 missing values in ‘LotFrontage’ column our team relied on FancyImpute library and created a KNN model using all other predictors.

Figure 1: Heatmap of the Ames housing features showing the missingness in the data (left) before and (right) after data cleaning. Yellow shading represents the missing data points. The yellow shade in the heatmap on the right highlights the missing SalePrice information in the test dataset.

Our team engineered new features that can help increase the model’s performance, and created the following two new features:

Treatment of categorical and ordinal variables

After all the features were created, our team used Label Encoding and One-Hot encoding to treat the ordinal and categorical features.

Correlations between Features and Target 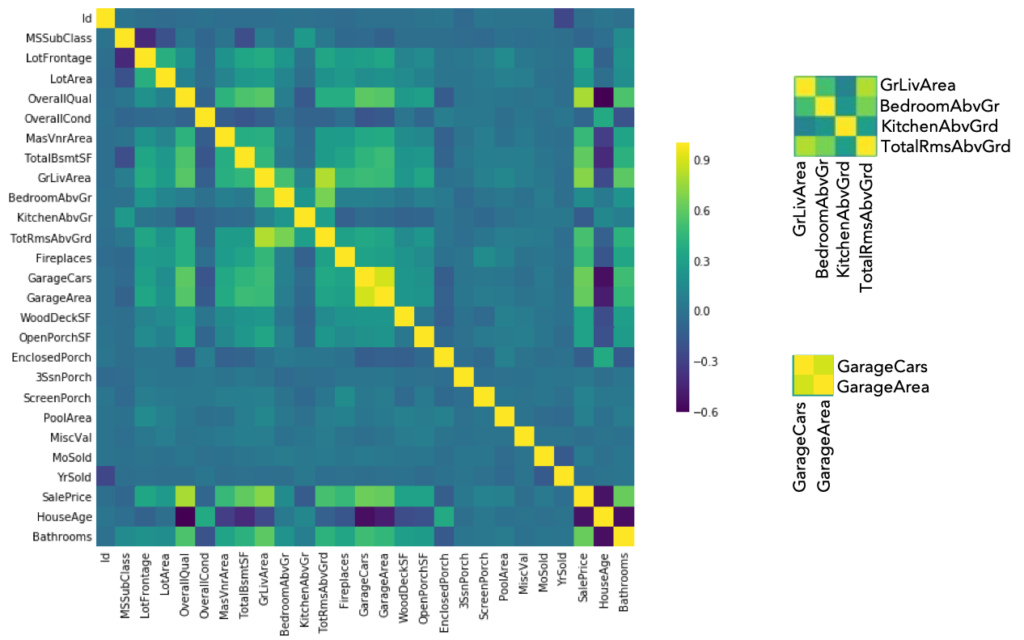 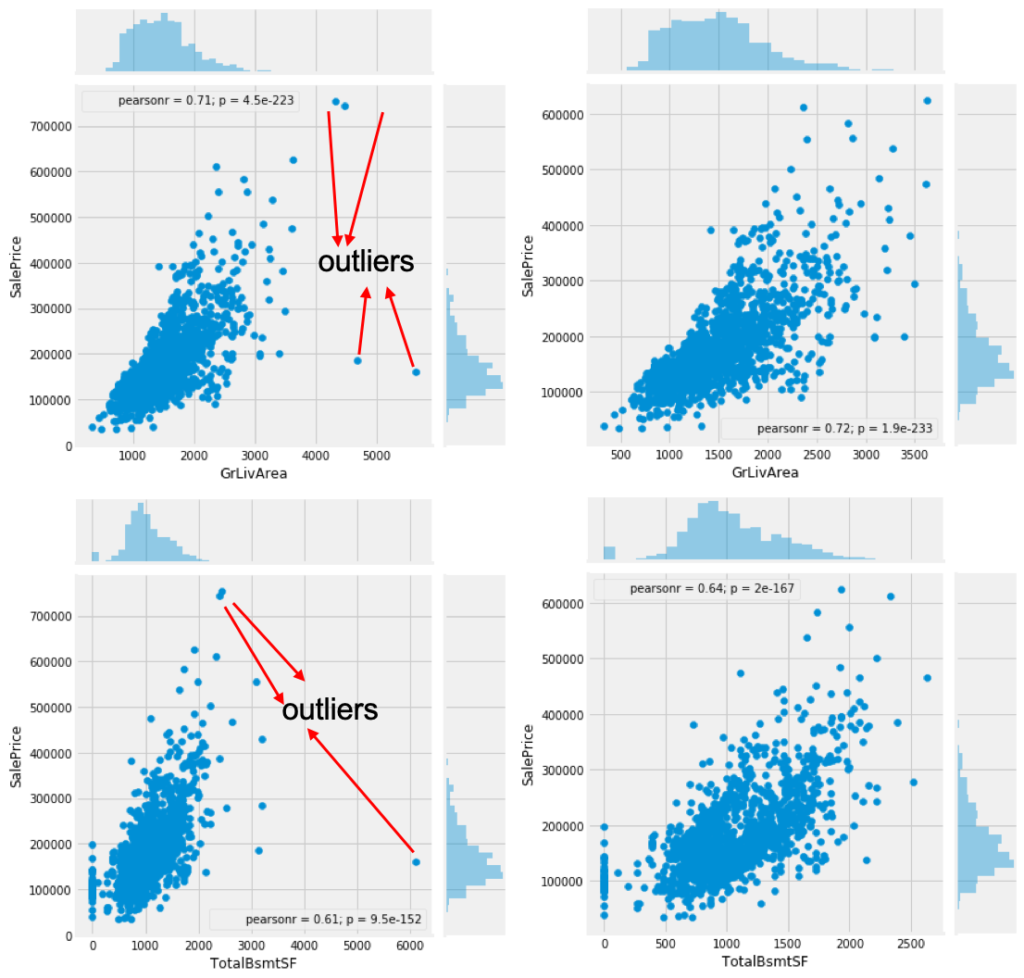 Figure 3: Scatter plots before and after the removal of extreme outliers in GrLivArea and TotalBsmtSF

Our team plotted the histogram plot of ‘SalePrice’ distribution and observed a positive skewness and used log transformation to convert the values to normally distributed values. 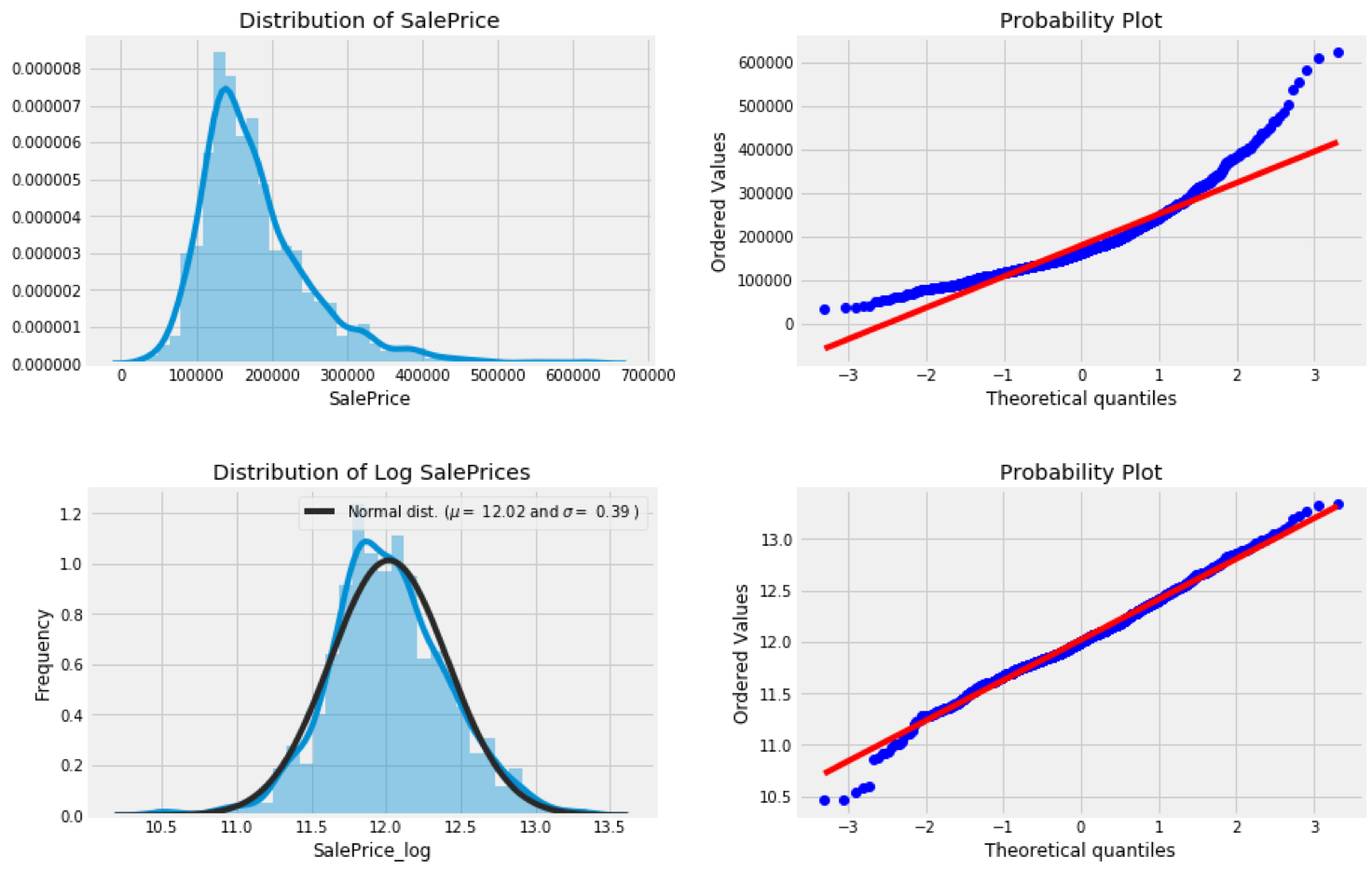 Figure 4: Density and probability plots of target variable before and after transformation

Once all the features were created our dataset now has 356 features. Our team created multiple models to make predictions on the sale prices of the houses in Iowa

Our dataset was split randomly into a 80% train dataset, and a 20% test dataset. Our team fit various models on the training dataset using 5-fold cross validation method to reduce the selection bias and reduce the variance in prediction power. We then used them to predict the outcomes of the residual test dataset in order to assess the accuracy and variance of our different models.

We built a multi-variate linear regression including all the features in the dataset as used it as our baseline model. We built three regularized linear regression models with alpha chosen by cross-validation. The Elastic Net model performed the best of all the models on the test data as shown below.  The figure below shows the top 15 features that received a significant importance in the feature importance output in our LASSO model. 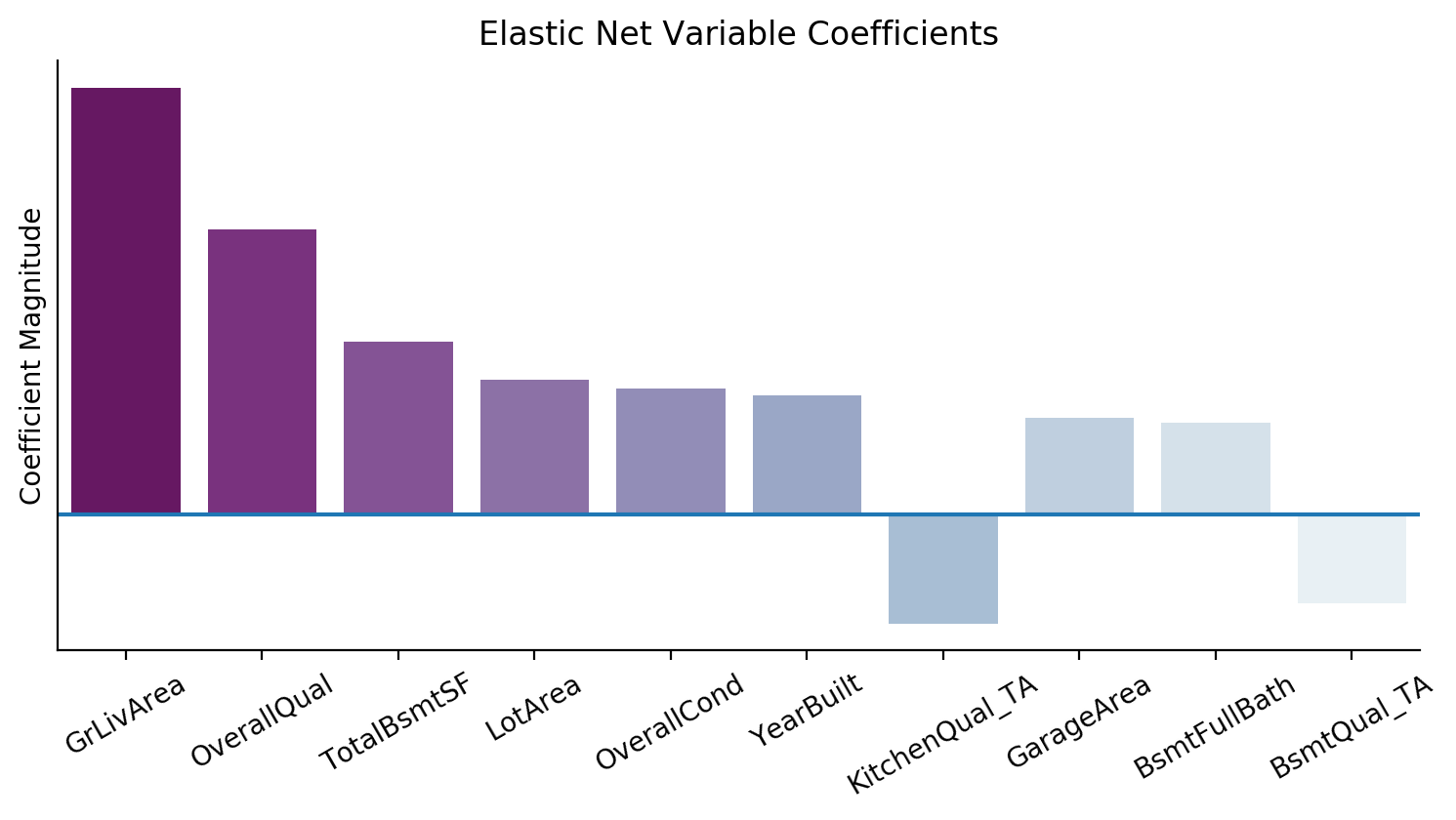 Our team chose Decision Trees as our base model and then employed some of the more popular machine learning algorithms such as Random Forest, Gradient Boosting Machines, XGBoost and LightGBM. These models are a choice to compensate for overfitting seen with the Decision Trees.

Our team optimized the parameter using either GridSearch or Bayesian Optimization. Random Forest is an ensemble of Decision Trees, often trained with the “bagging” method. Random forest algorithm builds multiple decision trees using a random subset of features and merges them together to get a more accurate and stable prediction. In Gradient Boosting Machines, new models are sequentially added to correct for the errors made by the existing models until no further improvements can be made. They use gradient descent algorithm to minimize the loss when adding new models. Both XGBoost and LightGBM are known for their Execution Speed (as compared to decision trees) and Model Performance.

Finally the table below summarizes all our results from different models

Please feel free to reach out to us if you have any questions or concerns, Thank you!

View all posts by Yung Chou >

View all posts by Nilesh Patel >

View all posts by Pankaj Sharma >

View all posts by Tim Waterman >