Real estate has traditionally been the finest investment since it provides both passive income and long-term appreciation if the value rises over time. When it comes to real estate, there are several factors in play, each of which is pricing. Historical prices reveal the value of a property's historical valuations as well as its growth in value. The goal of this research is to use machine learning techniques to investigate various variables including their impacts on property value and use that information to construct a predictive model for property prices.

The data for this project was generated as part of a Kaggle competition called Advanced Regression Techniques. This dataset includes a list of 81 variables and 2560 observations. The target variable is sales price, and the remaining 80 variables are used to construct a predictive model with a goal to study variables that have potential impacts on property values and use that information to predict house prices.

In statistics, exploratory data analysis is a common method for examining data characteristics. It helps to uncover the underlying story the data is telling. To begin, the first step is to perform a couple of statistics and graphs to explore the target variable in greater detail (Figure1.1). The target variable's mean and median are 180,921.2 and 163,000, respectively, as shown in the graph below. The histogram shows that the majority of the property values are in the $200k to $400k area, with the distribution being positively skewed or right-skewed, indicating that there is some deviation from a normal distribution. This is also revealed by a skewness value of 1.88 and a kurtosis value of 6.54. The QQ-plot has a lot of tails, which indicates that there are a lot of outliers.

Note: Log transformation is needed on sales price since the graph shows deviation from a normal distribution. 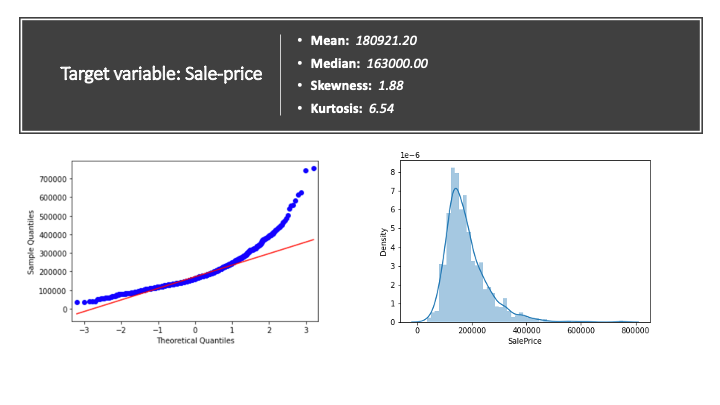 With further investigation, there are a total of 10 variables with a correlation coefficient above 0.5, which is considered moderately correlated to sales price. Among the 10 variables, the variable overall quality and general living area are considered highly correlated with a correlation coefficient above 0.7. This simply means when one unit of increase in the variable overall quality will result in sale price also increasing.

The EDA's final step is to look for missing values(Figure1.3). The data contains 34 variables with varying degrees of missingness. PoolQC (pool quality), MiscFeature (miscellaneous feature), Alley, Fence, FireplaceQu (fireplace quality), and LotFrontage (linear feet of roadway attached to property) are the variables with the most missing values.

Note – The goal of experimenting with various models is to see which one works best with the dataset. Linear regression and penalization regression are better at predicting continuous variables, and lasso regression give you an idea of how important a variable is. Nonlinear models like SVR, random forest, gradient boost, and Xgboost employ techniques like bagging and boosting. It's worth a shot to test if non-linear models could outperform linear models.

Linear regression is notorious for being sensitive to outliers because the presence of outliers causes it to deviate away from the true underlying relationship. Thus, applying linear regression as a baseline model can help in the detection of outliers. There are a couple of detection methods used in this process. Studentized residuals, leverage, DFFITS, Cook's Distance, and Bonferroni's one-step correlation. Cook's Distance was the best of the bunch, as it reduced the baseline model's mean square error and AIC the most (Figure1.5).

Insights – Despite the fact that RMSE decreases, the r-square remains at 0.9587. Because the r-square is on the higher end of the spectrum, there is a good probability of overfitting.

When RMSE was used as a performance metric, Xgboost outperformed other models (Figure1.7). Although Xgboost has a promising accuracy score, it takes over 30 minutes to train the model and grid-search for hyperparameters. Reduced model complexity is required to improve the model's time complexity. Furthermore, non-linear models appear to outperform linear models. When compared to all linear models, Xgboost and gradient boost performed better, however SVR and random forest underperformed.

One of the goals of this study is to find out what factors influence the sale value of the house. The best way to get that information is to use feature importance from models like lasso, random forest, and gradient boost. It shows how each predictor variable contributes to the prediction of the target variable and ranks each variable in order of significance. In random forest regression, the predictor variables are ranked by the proportion of the residual sum of squares that each variable reduces. The higher a variable's rank, the more influence it has on forecasting sale price (Figure 1.8).

The top three variables are listed below:

Extensive hyper-parameter tuning, better feature engineering, and the collection and incorporation of more data could all help improve model performance.

Here are a few instances: