The goal of this project was aimed to utilize supervised machine learning techniques to predict the price of houses located in Ames, Iowa. This dataset was provided by Kaggle, a very popular website for data scientist come to compete and test their skill and knowledge. This dataset provided around 80 different features, including multiple aspects of the house that would help or may not help predict the fluctuation of the house prices. The strategic approach our team adopted was to derive meaning from the dataset through various analytical graphs, statistical methods and then to apply different supervised machine-learning algorithms to predict the house sale price.

The dataset contained two csv files (train.csv, test.csv).The training set had 1460 observations and the test set had 1459 observations. The only key difference between the two sets was the absence of the column of sale prices in the test set. In order to predict the sale price of a house, we began by looking at factors like Neighborhood and Overall Quality of the house. As you can see below, both these categories play important roles in housing prices. Neighborhood plays into the old saying about real estate being all about location, location, location. But the house condition also indicates that the higher the quality, the higher the overall price for the house. 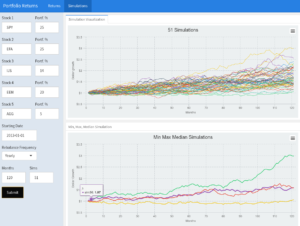 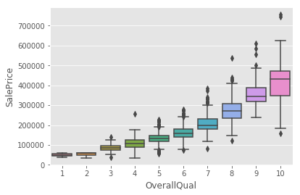 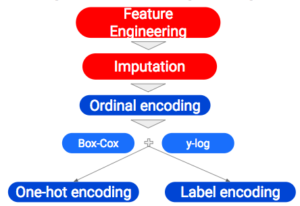 Data cleaning and feature engineering were performed to construct additional explanatory variables that can help predict the housing sale price. For this process, we combined both training and test datasets together after dropping the sales price. We first assessed features with missing values. Columns with missing values were imputed as shown in the table below. 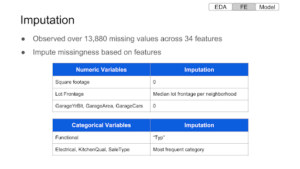 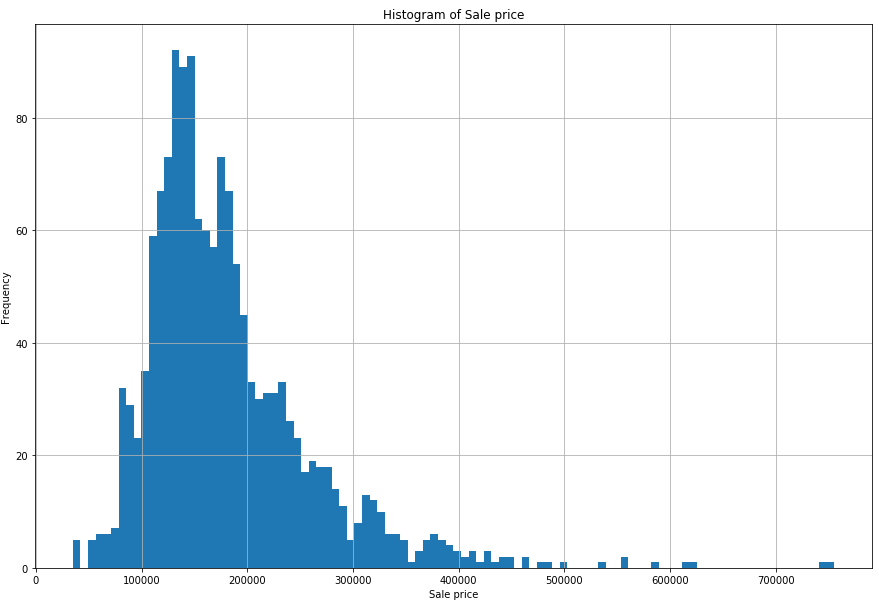 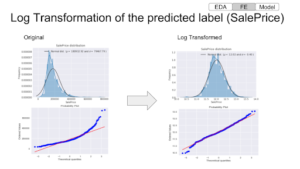 Different types of encoding were performed on the categorical predictors because machine learning algorithms are incapable of processing strings or plain text in their raw form. Three approaches of encoding were performed: one-hot encoding, label-encoding, and ordinal encoding. Ordinal encoding was performed, before the box-cox transformation step, on predictors with inherent rankings.  After box-cox transformation, the remaining predictors were either all one hot encoded or all label encoded. One hot encoded was used for regression techniques, and label encoding was used for decision tree techniques.

We tried out various types of models to understand which one worked best for our dataset. We started off using multiple, lasso (L1), ridge (L2) and finally elastic net regressions. Afterward, we used Decision Trees, Random Forest, Gradient Boost, and XG boost.

The regression techniques were initially used because they were fairly easy to implement to our dataset and didn’t require much maintenance to configure and optimize the results. We found that different regression techniques provided very different results. The one regression technique that provided the best results was lasso regression. We believe that L1 was the best due to the recognition of our one hot encoding which was able to use coefficients that heavily leaned on the correlation of the sales price. Our team assumed that using an Elastic Net would provide better results than the lasso due to its combination of using L1 and L2; however, this was not the case and provided an even worse CV score. The plot below shows the positive and negative 20 coefficients in the linear regression model. 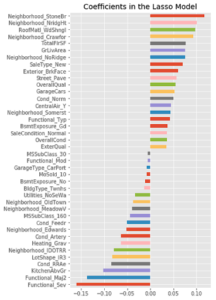 After our regression techniques, we switched over and implemented a number of tree-based models, such as RF, XG and XGboost. The initial tree based model we performed was the decision tree, which had a poor result. We used the decision tree results as a baseline to compare against more complex tree-based models. Random Forest, Gradient Boost and XG Boost had significantly better results,  with XG Boost showing the best result. Below is the feature importance plot from the XG Boost model. 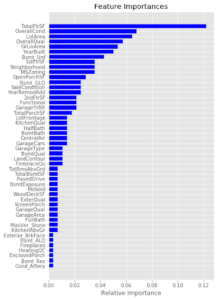 The main reason for attempting so many modeling techniques was to try to get  an ensemble method to produce the best result possible. However, since lasso regression yields the best results consistently through validation and Kaggle scores, ensembling of all the models was not necessary to gain marginal improvement on scores at the cost of losing model interpretability.

The results below showed that our Kaggle score and RMSE score from cross-validation follows the same trend and are similar in range. None of our models were overfitting, and lasso regression model and XGboost had the best results. 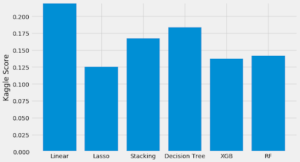 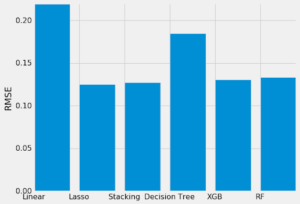 A few notes we had in mind to further improve our model accuracy would be to explore the possibility of stacking or ensembling individual models. In addition, we also would like to further explore the neighborhood effects on couple important features we identified using hierarchical linear regression. We had a theory that the clustering of the neighborhoods had a bigger role on the house price than we initially thought, and using hierarchical linear regression would have helped prove our theory right or wrong. Another interesting topic we had in mind for future improvements was the inclusion of time series event data to be included in our dataset. The recession cycle in 2008 must have played an impact somehow and our group wanted to see how that would have played out in our results. The economic index is something we had in mind we wanted to implement, showing things such as economic statuses and the communities living in the area. Since Iowa state university was in the middle Ames, Iowa, we saw a trend noticing that houses near the college were typically lower in price, while those north of the campus were higher in price.

Richie Bui has experienced knowledge working with collecting, processing and capturing large datasets while working with Medtronic the past 3 years. Closely working with his colleagues in engineering, product management, and bio-statisticians to gather information on the medical...
View all posts by Richie Bui >

View all posts by Hueyling Kao >