Analysis and Visualization of Crime in Chicago

Chicago has often been in national headlines for fluctuations in violent crime. Documentaries and TV shows like "Chiraq" from Vice and  “The Chi” on Showtime have also given a glimpse and feel of the overall nature of the south side of the city . The south side of Chicago is notoriously known for being riddled with high violent crime rates. In particular, Chicago was in the nation's spotlight in 2016 for raising the nation’s crime rate overall because of the large uptick in crimes from 2015 - 2016. There is speculation that the significant jump in violent crime circled around the case involving Laquan Mcdonald and the subsequent release of the video that recorded the incident. My Shiny app will help to visualize and confirm the uptick in crime rate and where/when crime is happening in Chicago.

I used the Chicago crime dataset from Kaggle spanning from 2012 - 2017. The data included information such as date/time when the crime happened, block where the crime occurred, type of crime, location description, whether there was an arrest, and location coordinates.

I removed data from 2017 as this data was not complete for the whole year so in any year over year analysis, this would have made for an inaccurate comparison. Some additional columns I added were for the type of charge (felony or misdemeanor) the crime fell under in Chicago, general location buckets based off the location description, and also some parts of date and time parsed out in order to view the data by different aspects of time such as year, month, hour, etc.

The dashboard consists of three different tabs you can click on the sidebar:

Note: Unfortunately due to ShinyApps.io limitations and the size of the dataset, I had to limit my data to just the years between 2014 - 2016 so that it could be hosted on its servers.

The heatmap displays a high level overview of crimes happening in various areas of Chicago. It allows the user to see the density in crimes by crime type, location, and year. Filtering by "Felony" and "Residence" below, one can see in general a higher concentration of red in the southern half of the city. 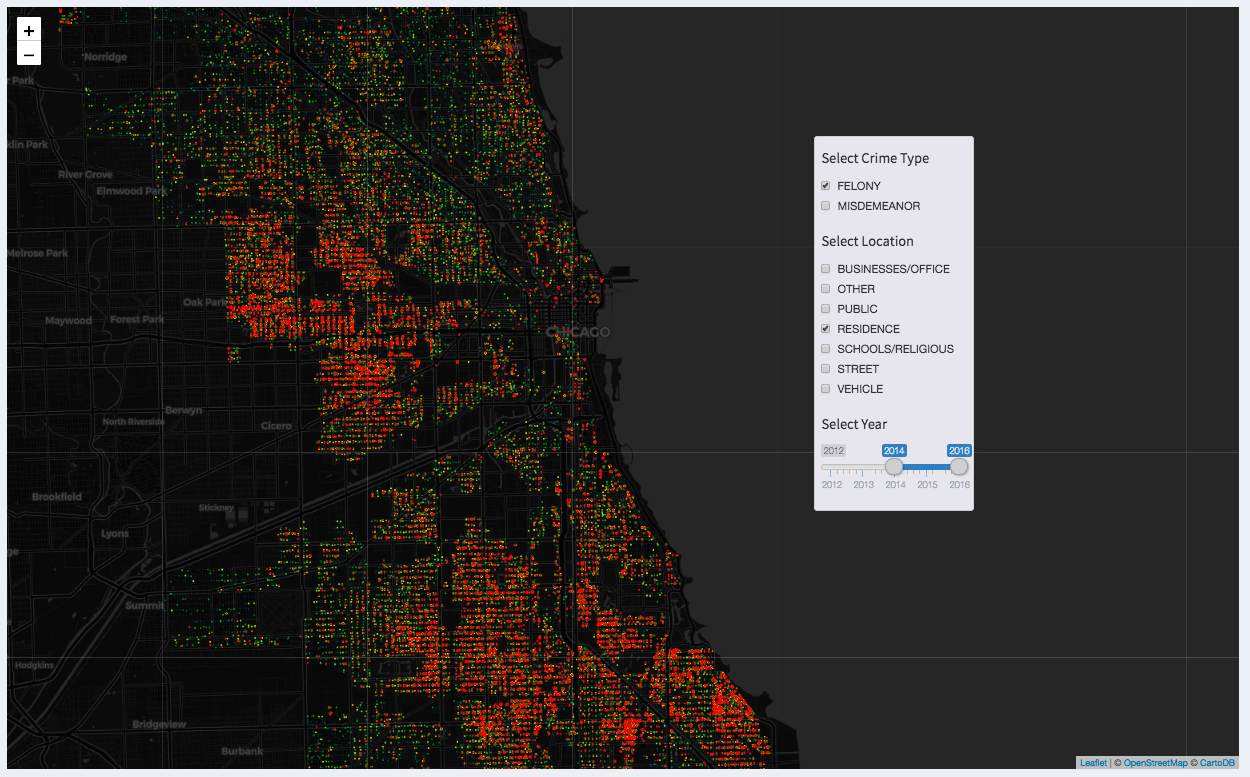 The cluster map depicts crimes by the numbers filtered by crime type, location, and year. The clusters move apart as you zoom into a particular location and allow you to see specifics of a crime when zoomed in far enough to its location. 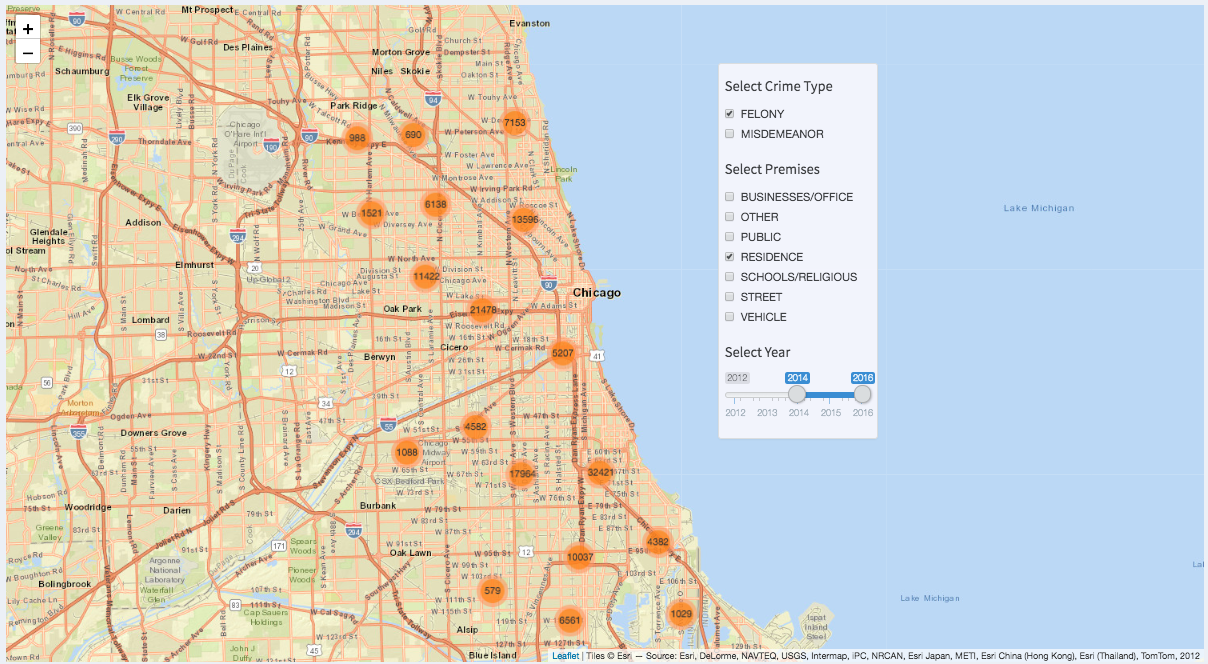 You can see below the details for crime type, date of crime, whether there was an arrest, and location type that you see once zoomed into a particular area and point. Here we are zoomed into Englewood which is a neighborhood with one of the highest crime rates in Chicago. This particular cluster situated near a school shows a high volume of crime clustered in the same area. 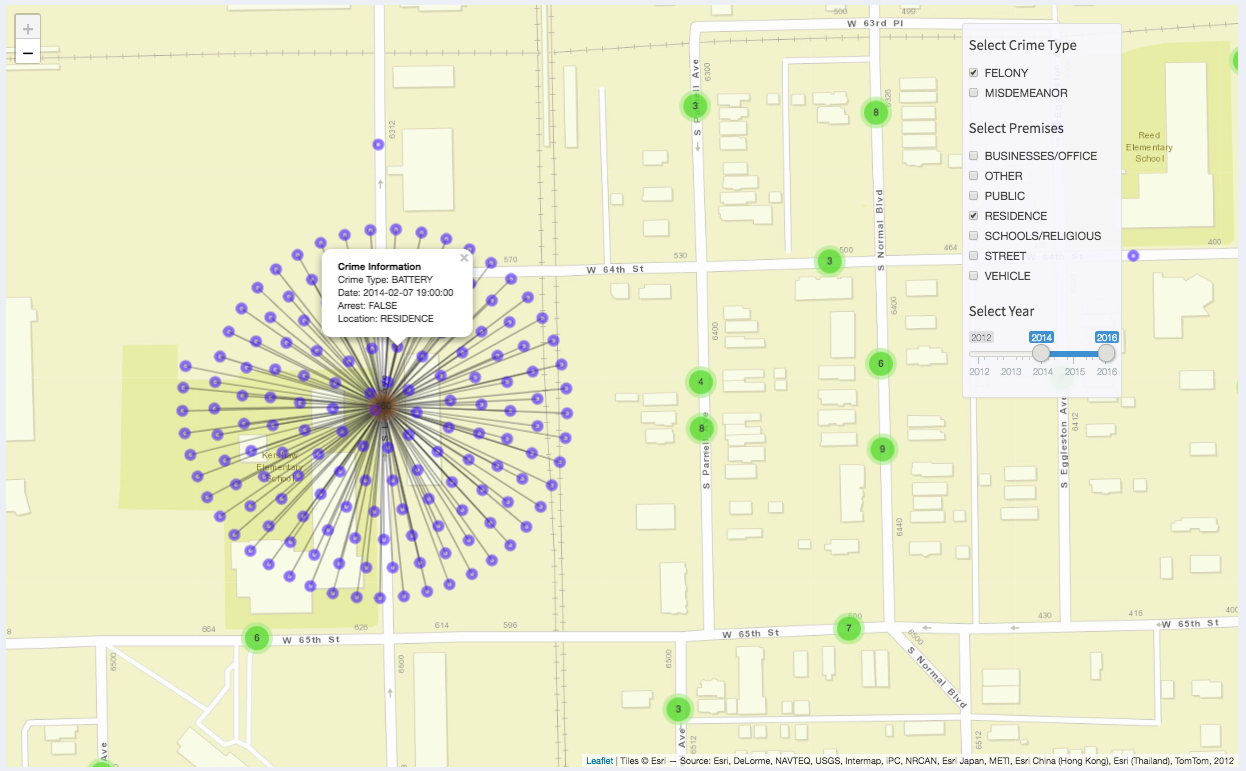 In the two time series below, we can see trends in the number of crimes and arrests overall in Chicago. With arrests we see a general decrease from 2014-2016 aligning with the spike in crime rate following the Laquan Mcdonald case. In the crimes series, there are a couple distinct spikes which seem to be occurring on New Years day of each year. 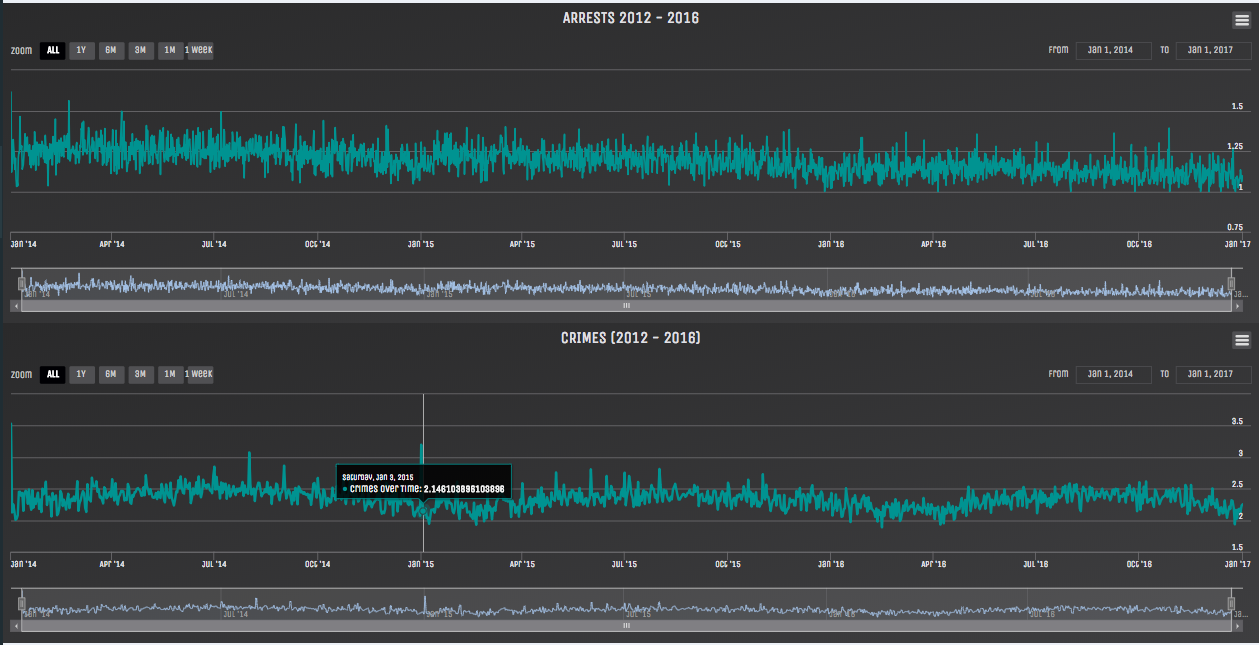 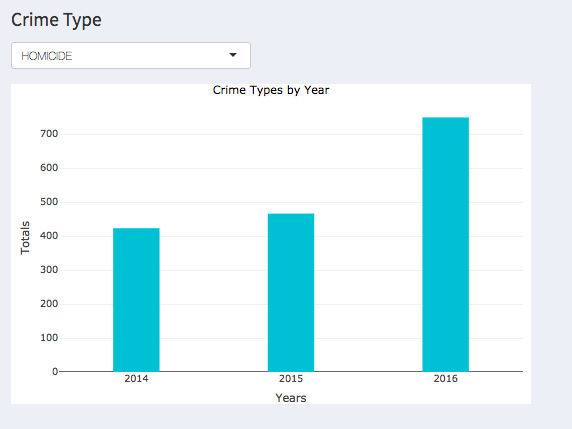 Further, we see the crime rate by crime type normalized by Chicago’s population (2.7MM). Even with the data normalized, there is still a large increase in homicide rate between 2015 - 2016. Chicago actually joined Memphis at this time as the only cities with a double-digit increase in murder rate in 2016. 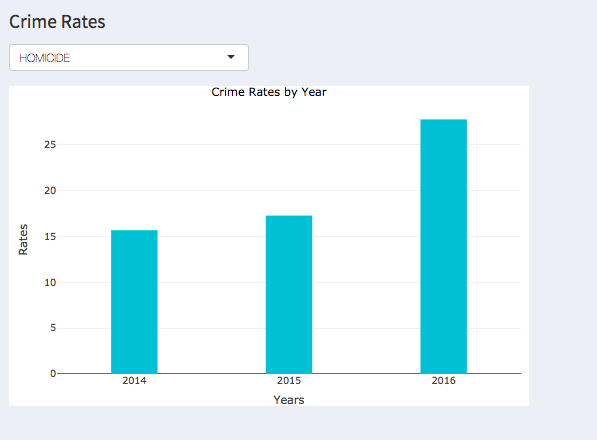 Finally we can see crimes and locations by hour which allows users to see the hour at which a crime is more prevalent during the day. Here we see that homicides happen mostly from late afternoon 4 PM to 3 AM at night. In terms of location, the below shows crimes happening at  schools/religious locations mostly during the day, likely during typical school hours (7 AM - 3 PM). 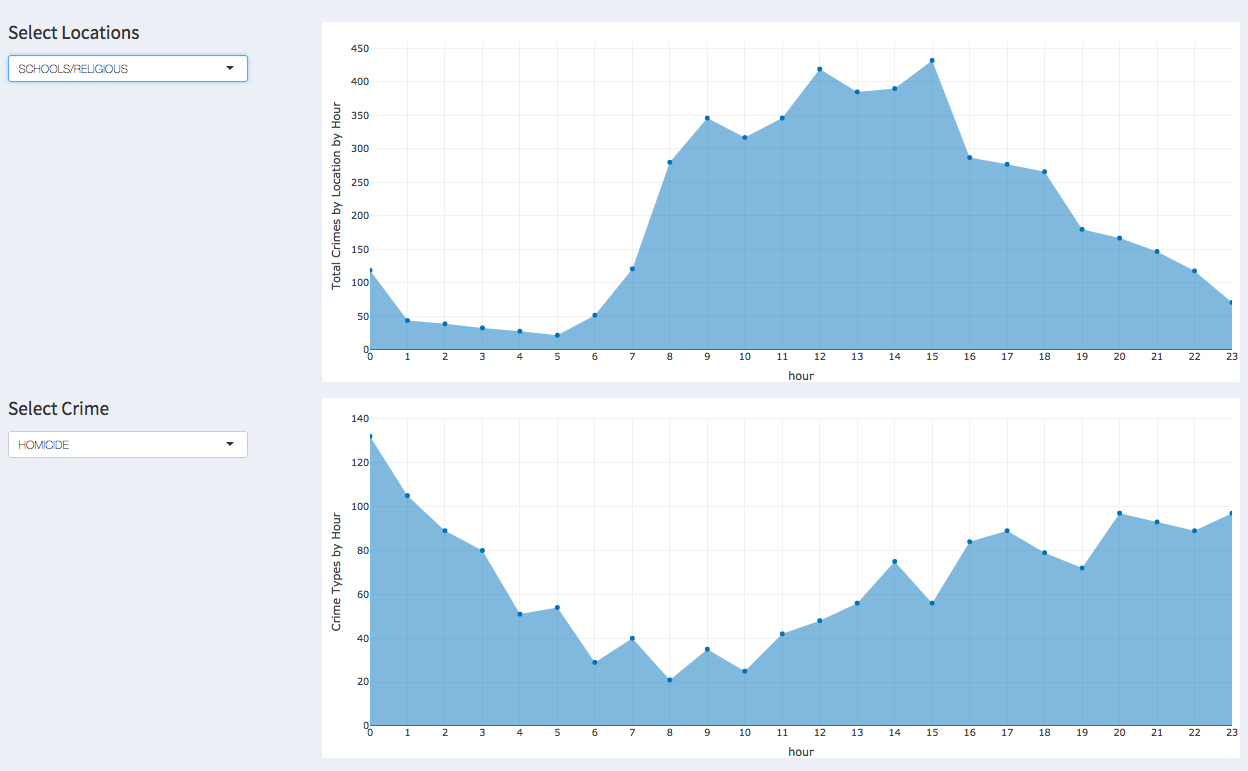 As I continue to add to the application I would like to add additional datasets such as spending on social initiatives in Chicago and evaluating the impact. Also taking a look at the distribution in ages of people committing these crimes. If it has been a younger demographic, perhaps this indicates a need for a more aggressive approach to social spending and initiatives. Overall the goal would be to see how the trends in crime can start reversing by honing in on the actual triggers and running regressions to see the effect of education spending, income inequality, and age  on crime rates by each neighborhood.

Katherine Sohn July 7, 2018
Hello sorry for the delay in response! There is a link to the kaggle data in the post.

krishna May 28, 2018
Hi! can you please upload the data set which you have used for the visualisations ?